I decided to make stuffed dates in harissa using a recipe from SanChez in Grand Rapids. I could have probably bought harissa off the shelf, but just had to make my own. The difficulty with this is twofold. First, there are many different recipes, apparently reflecting the different cuisines of North Africa and the Mediterranean. Second, many recipes looked HOT. This would be ok for me, but not necessarily my friends. In the end I made the harissa recipe from SanChez, but touched it up a little to my taste.

As it turned out, the dates were really decent, but I didn’t love the harissa, as the lemon peel in the recipe made it somewhat bitter. This bitterness was moderated by the sweetness of the dates that were cooked in it, but in the future I would use a different recipe.

The dates were served with an inoffensive Beaujolais that was rather underwhelming. Oh well.

The bigger fiasco of the evening was dessert. About an hour before mealtime, I realized we had no dessert. I decided it was time to explore my dessert lasagna concept, which I had been considering for years. So I quickly threw together some fresh pasta, mixing in citrus zests, and layered it with raspberry jam and mascarpone cheese. It looked brilliant. At least it did until it fell on the floor. My friends were mortified that we might not have dessert. They even encouraged me to scoop up the remains and cook them. Being the bastion of hygiene that I am, I promptly disposed of the carcass (after a brief mourning period). Then I realized that enough pasta dough remained to make another dish. Eileen went to the store and bought preserves, and the dish was resurrected, using ricotta rather than mascarpone (I worked with what I had). Served with ice cream, it was a delicious dish, and one I will work to improve.

Mitch & Eileen brought really great cheesy cambozola muffins that everybody loved. They were delicious and light and elegant. I was in cheesy bliss. 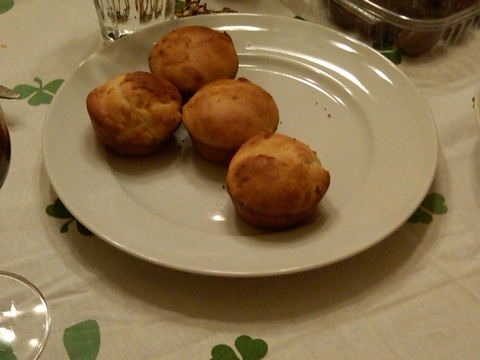 Joe (without Michael) brought the real star of the evening – a martini made with bacon-infused vodka. Yes, you read that right. This was simply outstanding. I’m still giddy thinking about it. He also brought a really great chicken dish, but the martini blew me away. I am telling everybody I know how good it was. At one point in the evening I picked up the drink, almost absentmindedly, and the flavor hit me, making me giggle. I’m still grinning thinking about it.

The theme for next week is Mardi Gras. Mitch & Eileen are going to bring dessert, so at least we won’t have any last-minute cooking of the most important course. But I have much thinking to do in this regard. Maybe it’s time to try grillades and grits again?

2021 Edit: I’ve cleaned things up a little and added names. Initially this was a food blog, and I used initials rather than names for the sake of privacy. Over time the initials became confusing and I began using names. When updating the blog, I decided to use names wherever possible.

By the time this post was written, Top Chef nights had been happening for years, with the first crew being Jenna, Peter (her husband), Mitch, Eileen, and me. After Jenna and Peter moved, I became primary host, with Michael, Joe, Natalie, and eventually Richard joining us. I think Angie joined us a few times as well, before she moved.

Although we continue to call the night “Top Chef,” it wasn’t exclusively devoted to TC (as we called it). Sometimes, when TC wasn’t on, we would watch other things. And sometimes we watched nothing and just enjoyed each others’ company.