I had a new guide today, Y. He went to school with N, and both of them are very informative and helpful. Today, however, I am on a private tour, not a group tour, so it was just the two of us and a driver. So far on this trip, I have been to some of the most popular sights in the area. The plan for today was to focus on smaller cities, but not necessarily less important ones. 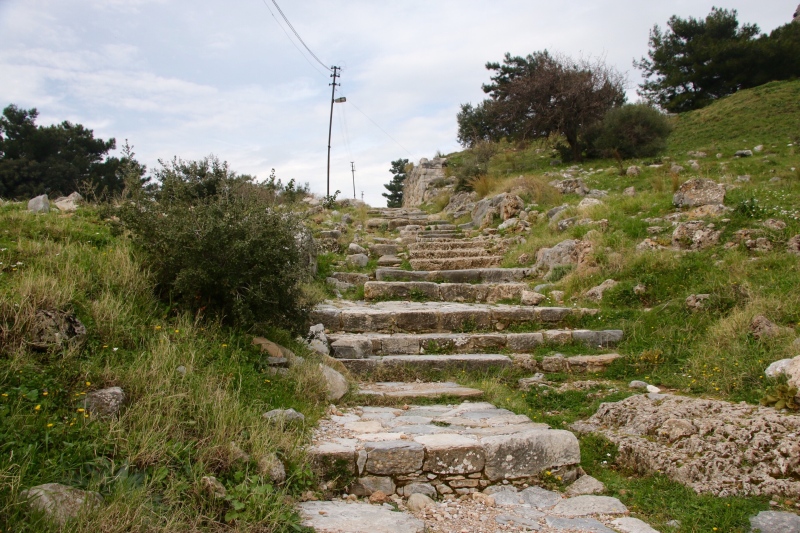 We started at Priene, which Y states was once the lead city in Ionia. The site was chosen because of its location high on the hill, and therefore its defensible position. Of course that meant we had a bit of a trudge to get there. 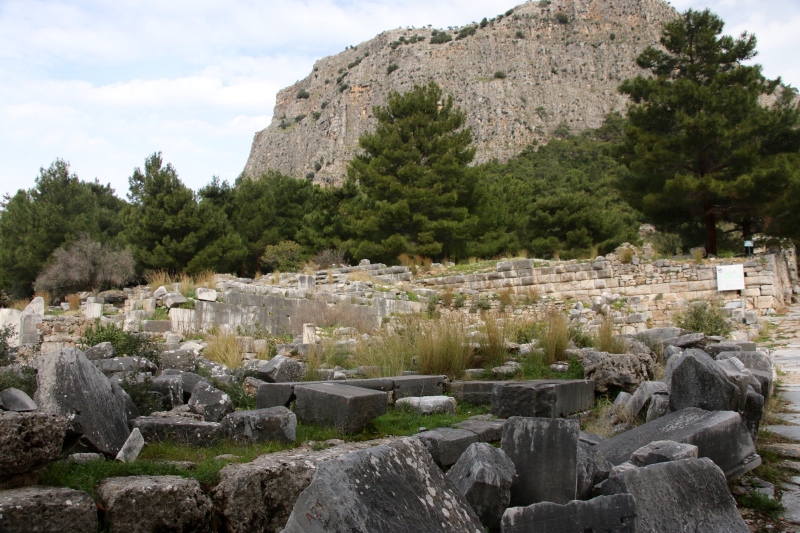 The city was destroyed by an earthquake, and the site looks it, with stone scattered all about. I observed that this site hasn’t been scavenged like so many of the others. Y stated that is because of its location and difficulty of access. 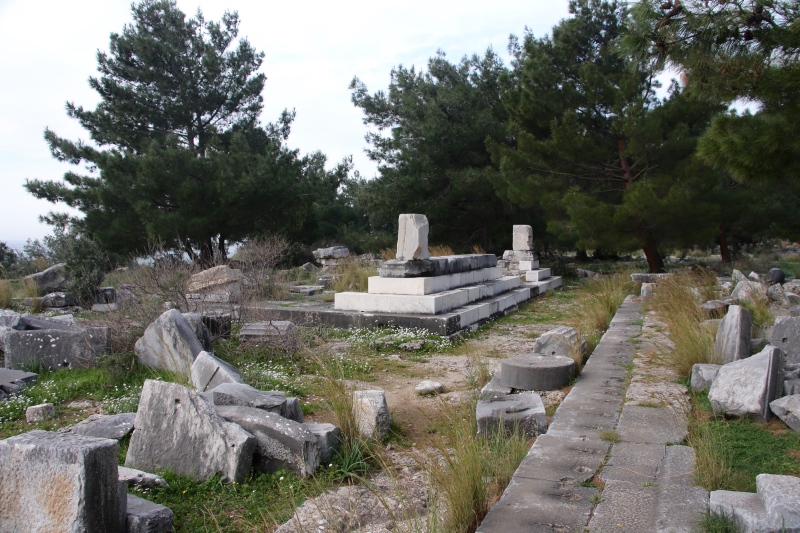 We wandered the ruins for a bit, finding the sanctuary of Aesculapius. 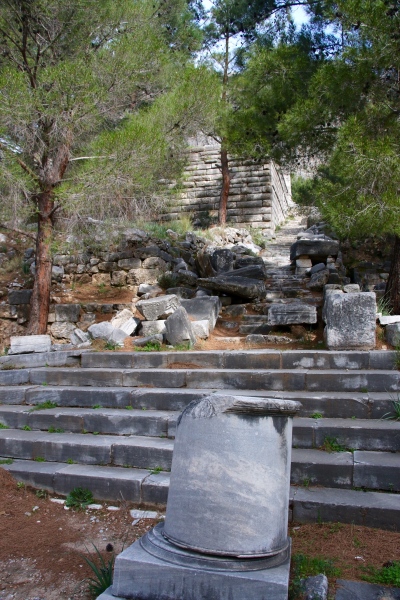 We crossed the ruins again, heading further up, passing this column bearing a Greek inscription. 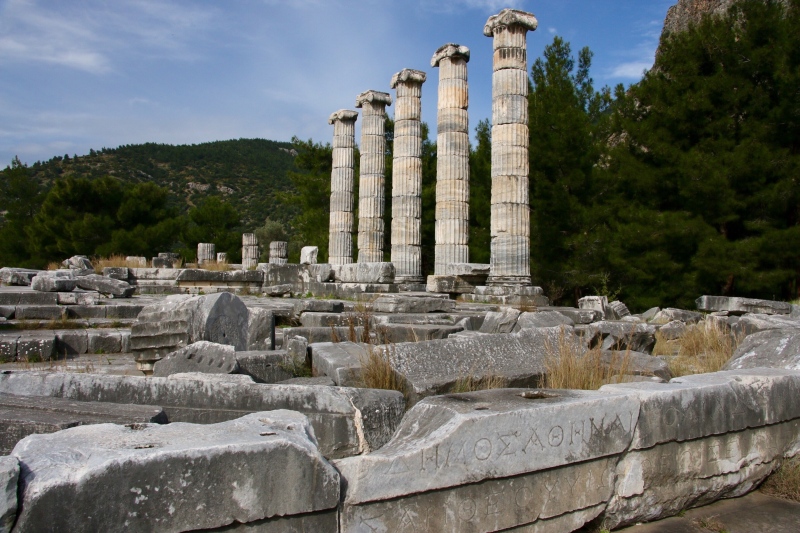 This city has an acropolis, upon which stood a great temple to Athena. And this was where we found ourselves. I am shocked by how much of the temple remains at this site, in pieces. Y stated that to reassemble an ancient building 75% of the structure must remain, and this temple could be reassembled, but they don’t have the money for it. What remains, however, is absolutely stunning.

Looking out from the temple, the farms in the valley are idyllic, but 2300 years ago, this was a port city, and this area was all sea, now long since silted over.

From the temple we passed to the Christian basilica, obviously built much after the Greek temple.

There is a well-preserved theater here, including VIP floor-level seating up front. That’s something I haven’t seen before. Don’t worry – there were no gladiator fights here. This was a Greek theater, not a Roman one.

After a few more brief pauses, we descended to the car and were on our way to our next destination, Miletus. Miletus shares a fate with Priene and Ephesus. The city once sat abreast the see, but its port filled in with silt, becoming marsh. Of course, marshes breed mosquitos and malaria in this part of the world, and that ultimately drove the population away. 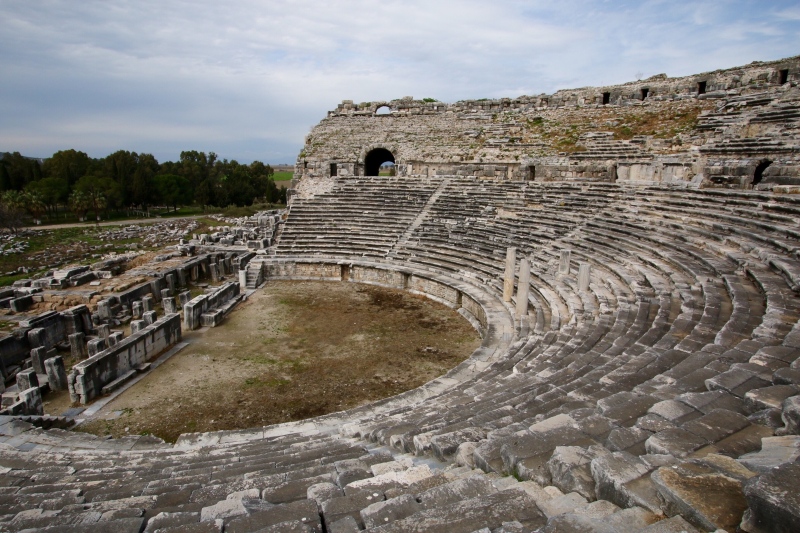 Upon parking, our view was immediately dominated by the 15,000 seat theater. This theater was much more widely used during the Roman period than was the theater in Priene, so the taller inner walls were likely modified at some point to keep gladiators in and away from the audience. 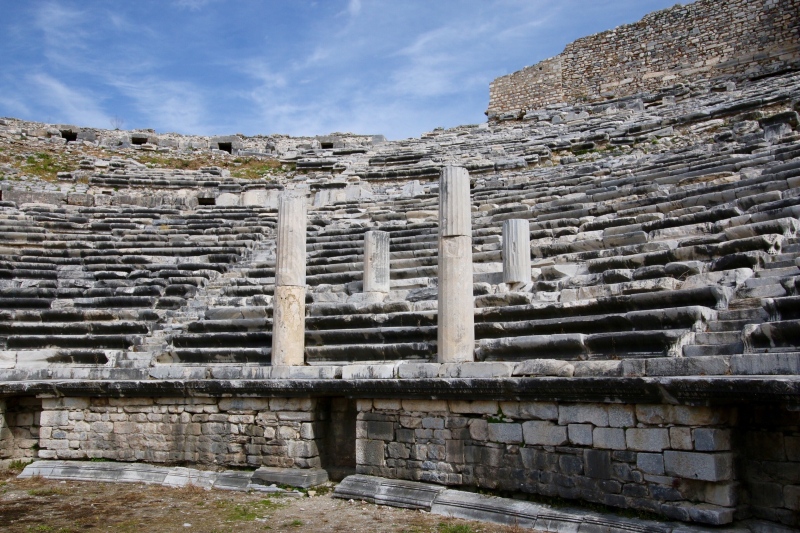 There was a covered VIP area in the middle. I also haven’t seen that before. Of course, that design also means obstructed view seats above.

Miletus itself is less well preserved overall, so we didn’t tarry long. The streets, like Priene, are arranged in a grid, which is one of its most important aspects. Walking down those streets behind the theater, we can see the ancient agora in the distance. Mosquitos now live there.

Finally, we visited the baths. We explored them briefly, reviewing the history and design, but we were swarmed by very loud and aggressive flies and soon made our escape.

We drove for a bit and had fish for lunch at a restaurant in Didim. Y was surprised that in the US we are almost never served a whole fish. I think this is just one of those differences that boils down to cultural expectations and norms. Americans don’t like seeing fish heads on their plates.

As the conversation continued we discussed the current state of affairs in Turkey. The recent terrorist bombing was a long way from here, but tourists are not coming. Over 50 cruise ships have canceled their dockings for this year, and many people who had planned tours have changed those plans as well. Over the last year the number of tourists has dropped precipitously. Americans, for example, are now and unusual sight, and I am a rare exception. Y is confident that things will improve once the situation in the Southeast part of the country stabilizes, and is optimistic that will happen soon.

I am glad that I am that rare exception, and that I have come to Turkey. I have found it to be a friendly, welcoming country, with a great deal to offer. Although I have many places to visit around the world, Turkey has already earned a spot on the list of places to which I would like to return.

As we finished up our conversation over a cup of çay (Turkish tea), Y informed me that at that moment I looked very Turkish. He is the first person to tell me this, but I have thought it before. I also have thought it in Naples and in Sicily. There have been a few places where I have traveled that I have looked at the locals and thought “I look like these people.” I am not Turkish, but that itself has been a welcome. 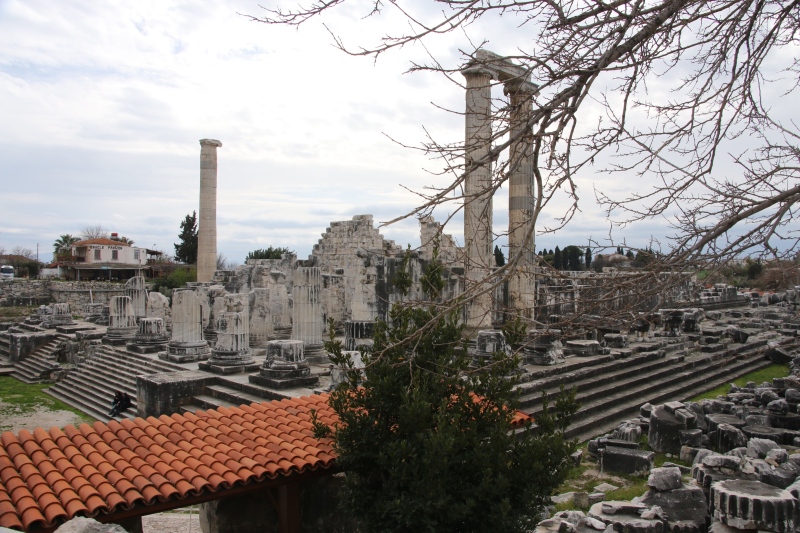 Lunch concluded, we returned to our task. We came to Didim not to find an ancient city, but an ancient temple, the Temple of Apollo. This was the second largest temple of its time, second only to the Temple of Artemis. It now sits well below street level, and we had to descend for our visit. 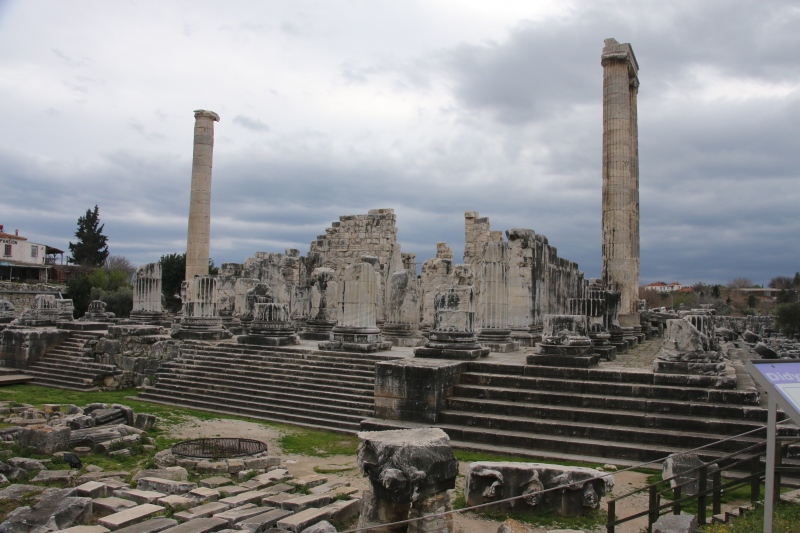 Whereas Artemis is mostly now an empty site, there is a lot to see here, amidst the rubble strewn about haphazardly. 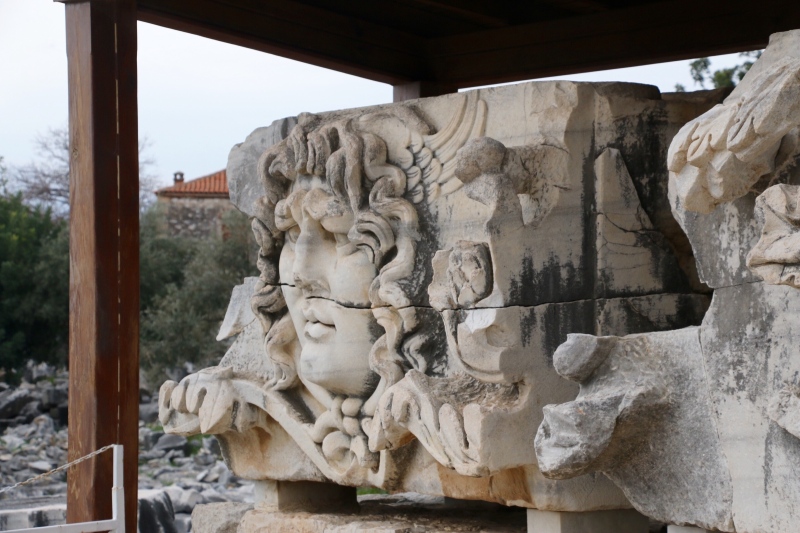 There are medusa heads all over the place.

Unlike the Temple of Apollo that we saw in Paestum, we were allowed to enter this temple. 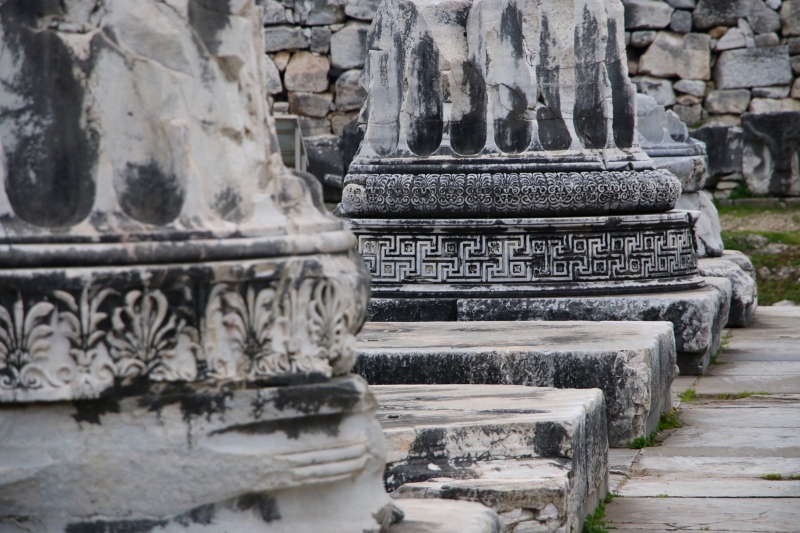 Upon climbing the steps, the detail in the carving on the base of the columns immediately caught my eye. I’m just astounded at the quality after 2300 years. 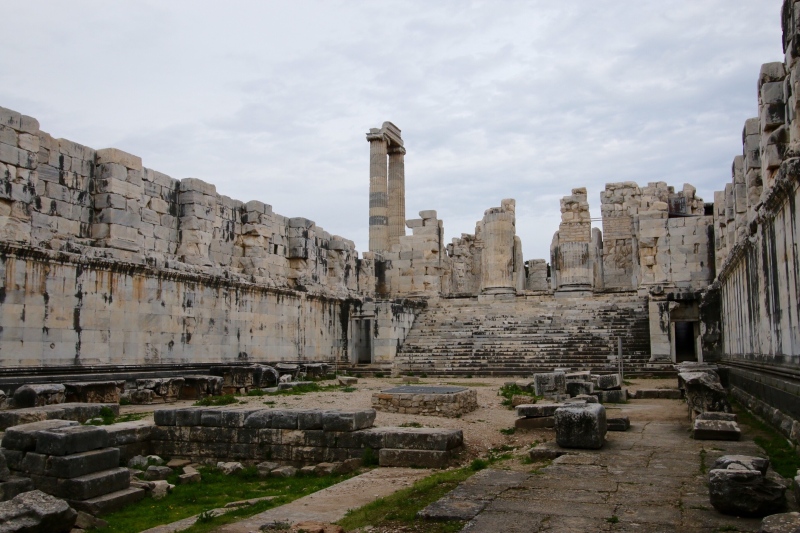 We followed a ramp into the back room of the temple, which sits even lower. In ancient times there was an oracle here, and it was the 2nd most important oracle of its day. Oracles were often placed where noxious gases come out of the earth. The gases causes disorientation and confusion, with resulting visions. Nobody knows where the gases came from here.

After a time, we passed back out of the Temple of Apollo, and I paused to take in the grounds. Centuries of permanence stood here once, now replaced by a recklessly distributed collection of scree. I touched the chill stone of the disarticulated columns about me, feeling their hard, craggy surfaces. The Temple may have been impermanent, but the stone isn’t, or not nearly so much. After the destruction of the earthquake that brought down so many structures in this county, it is still here. It has watched ages pass on this Earth, and may yet watch many more.

And with that we ascended from the Temple of Apollo and our day was complete.

One thought on “Continuing Our Tour of Ancient Greece. In Turkey”