Final morning in Bologna and I slept in until 8. There have been too many early mornings, too many afternoons of jet lag necessitating a 25 minute nap (this is only tolerable given that many things close for a ripasso at this time, anyway).

Today we will follow a tradition of L and B who cook on the last day, and I am on a mission. L has chosen to make a salad and tortellini with cream sauce as it is just too warm for brodo. Last night she assigned me the task of a secondo, which I am to make in a small kitchen that is, perhaps, underequipped for the things that come immediately to mind such as cotoletta alla Bolognese. Further, I am unable to draw upon the things I learned in my class as they were mostly primi. No, I am being called upon to make a main course.

In the fading hours last night I searched and found one idea, one thing that sparked my imagination, an item that reflects the local cuisine, and that would be perhaps doable, if it would only fit in the very small pans in the kitchen. Zampone, or stuffed pig trotter, would be too large, but not, perhaps, it’s cousin cotechino. This is more traditionally a winter meal, served with lentils (sausage, when cut, is round, as are lentils … One should eat coin-shaped food on New Years Day to bring in money for the coming year) but at the moment we are still feeling summer heat, and I worry that the sausage may not be available right now.

So we head out to the streets and shops of Bologna seeking our culinary fates. The tortellini are an easy find, as are the elements of the cream sauce, cream and cheese (there are basic spices in the apartment). We could do a bechamel, but simplicity is a goal. L also purchases fennel, arugula, lemon, and shallots for her salad.

When I have eaten this before it has been served with a relish or mostarda, and I consider making one, but am mostly searching for a small jar that will suffice. At the same time I am also on a quest for an appropriate side. On these dual missions, I settle on a box of large white beans for the contorno.

Other purchases for the morning include parmiggiano reggiano to take home and wine. 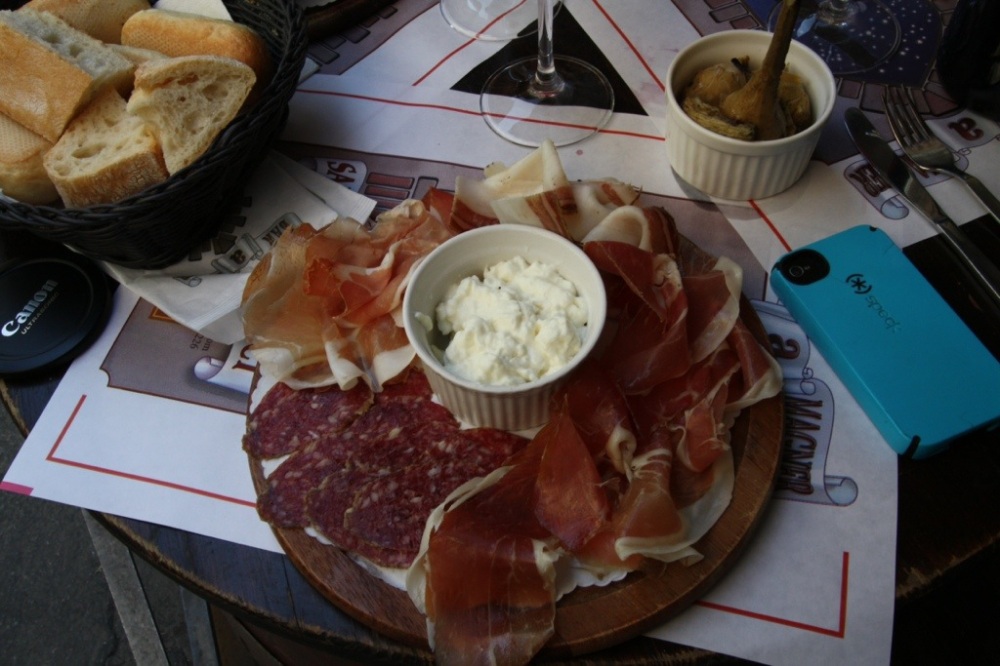 We have lunch at Tamburini. We all have cold cuts of some sort. Mine includes a sausage, prosciutto, and lardo. Everything is delicious.

In the wake of these obscene lunches, we have gelato.

When eventually our footsteps lead us back to the apartment B asks me to call a taxi for him for the morning. The first company has me on interminable hold. The second company responds more quickly and I inform the woman on the other end that we need a cab at 4:45. So far so good. She asks for the address, and I give it to her. She confirms the information and I’m happy, because an Italian phone call is going swimmingly.

Then she asks for the phone number. I give the first two digits and she is on me like a junkyard dog. I try to explain that it is an international number, and she expresses understanding. I try again with the number, and again she is pummeling me with heated words of anger and ancient Roman curses. I turn the volume down on the phone, as she is making herself quite clear even at the lowest setting. We try again, but she resumes her relentless assault and I can hear the spittle dripping from the phone. This continues until eventually she hangs up on me in disgust. Hopefully the cab will arrive tomorrow. I pray.

During the remainder of the afternoon we plotted our meal and did more shopping. I decided the beans needed something – rosemary perhaps, but I definitely wouldn’t need much. Fortunately I had seen a large rosemary plant garnishing (?!) the statue down the street, so in “little old Italian woman” fashion we borrowed a sprig.

And…. Here is dinner: 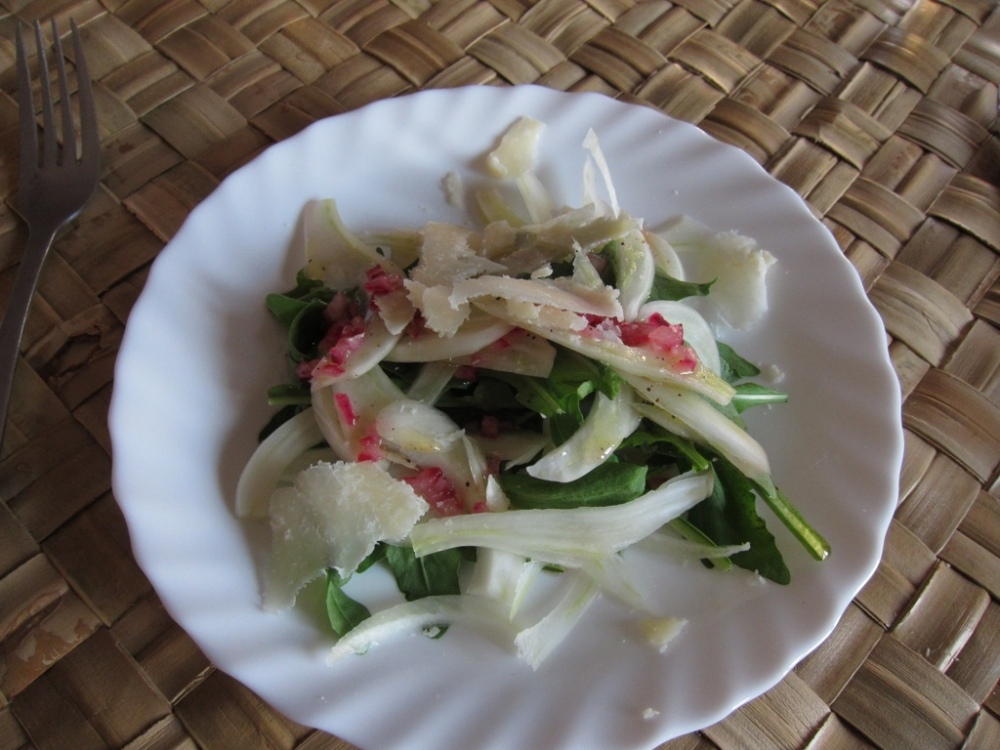 Tortellini with cream sauce. This was basically cream in which we melted a ton of parmiggiano reggiano and added pepper and a touch of nutmeg. The tortellini from the shop downtown were good, but to be honest I’ve made better. And I can say that now! 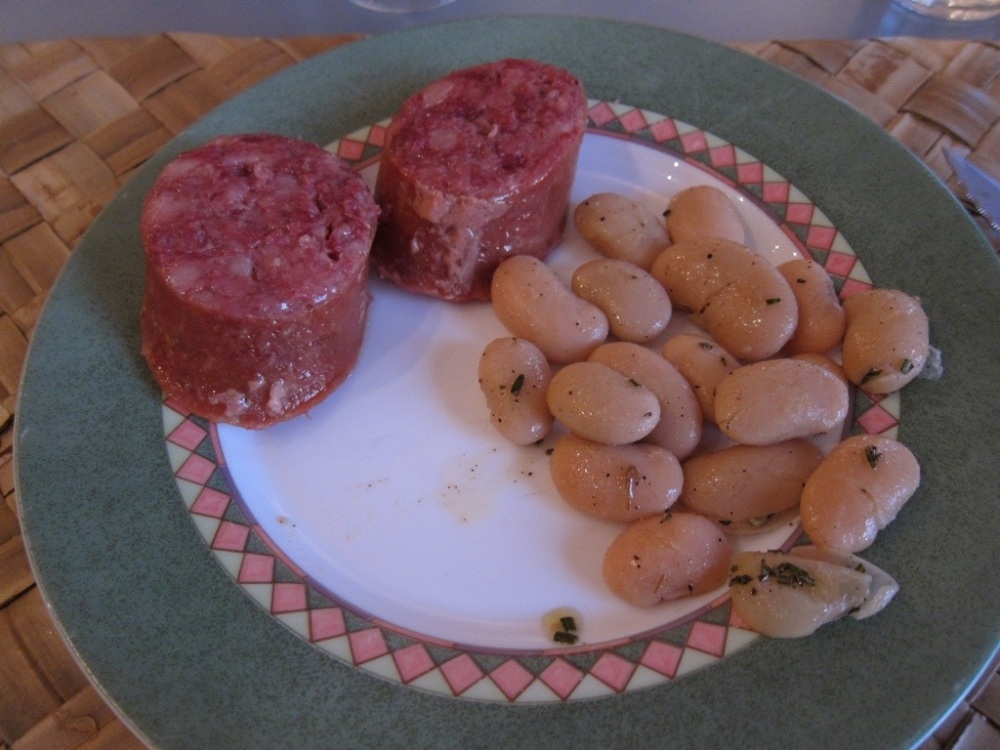 For the cotechino, I gently immersed the bag in water and boiled for 30 minutes. Then I opened it, drained, and sliced. For the beans I heated some olive oil, added the chopped rosemary, and tossed the beans in the pan. I covered them to heat through and seasoned with salt and pepper. Simple. The flavor of the cotechino is similar to corned beef, but the texture is soft. Many people wouldn’t like it, but we are all adventurous and enjoy it.

This was huge. I found this small jar of onion compote at the store and it was was delicious. Fatty foods can’t be eaten alone – they need a counterpoint to mellow the richness. By itself the cotechino would be too fatty. The onion compote and the beans balanced the plate and cut the fat nicely.

Yes, basically I cheated on dinner. I bought prepared foods and fixed them up. And I would do it again. I have no shame.

In the wake of the meal, reality intrudes and we begin our packing. My suitcase undergoes fission and I now have two bags where there once was one. In one bag will go the liquids from our trip, the wine and the balsamico. This bag will be checked, and the glass containers holding these precious liquids will be cushioned by some espresso pods (it was a deal!) and many layers of clothes.

In the other bag will be newly purchased clothes, toiletries, and cheese. This will be the carry on.