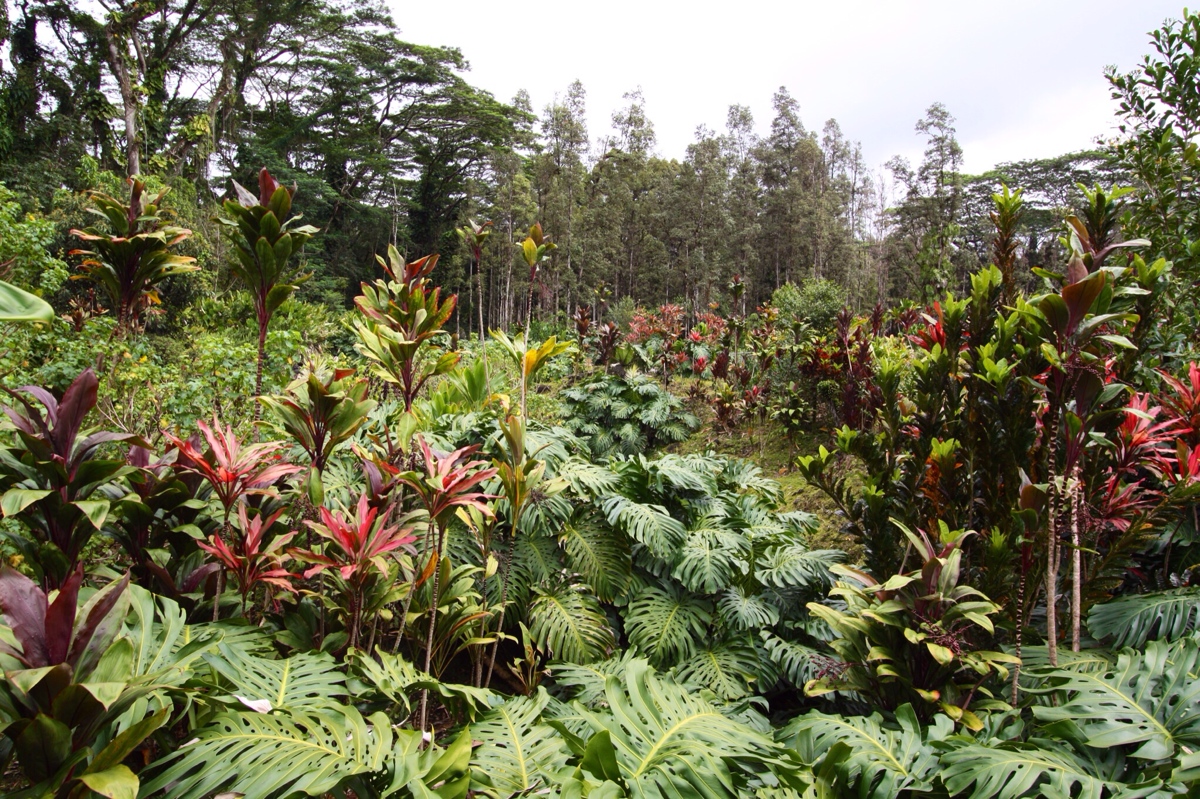 Another night with the frogs. Oh the frogs. I never understood the plague of frogs – what could be so bad about frogs? Well as I have now discovered, left unabated, they’re incredibly incredibly loud. I’m betting the frogs in the plague were tree frogs. If they were sizeable frogs, like bullfrogs, the Egyptians would have just eaten them. Nope … nothing to eat in a tree frog. Just lots of noise.

We woke and packed our things, because we would be moving to another B&B in the evening. We chose one a little ways away because we wanted a kitchen in case we decided to cook something. And then we were away to begin the day’s advetures. 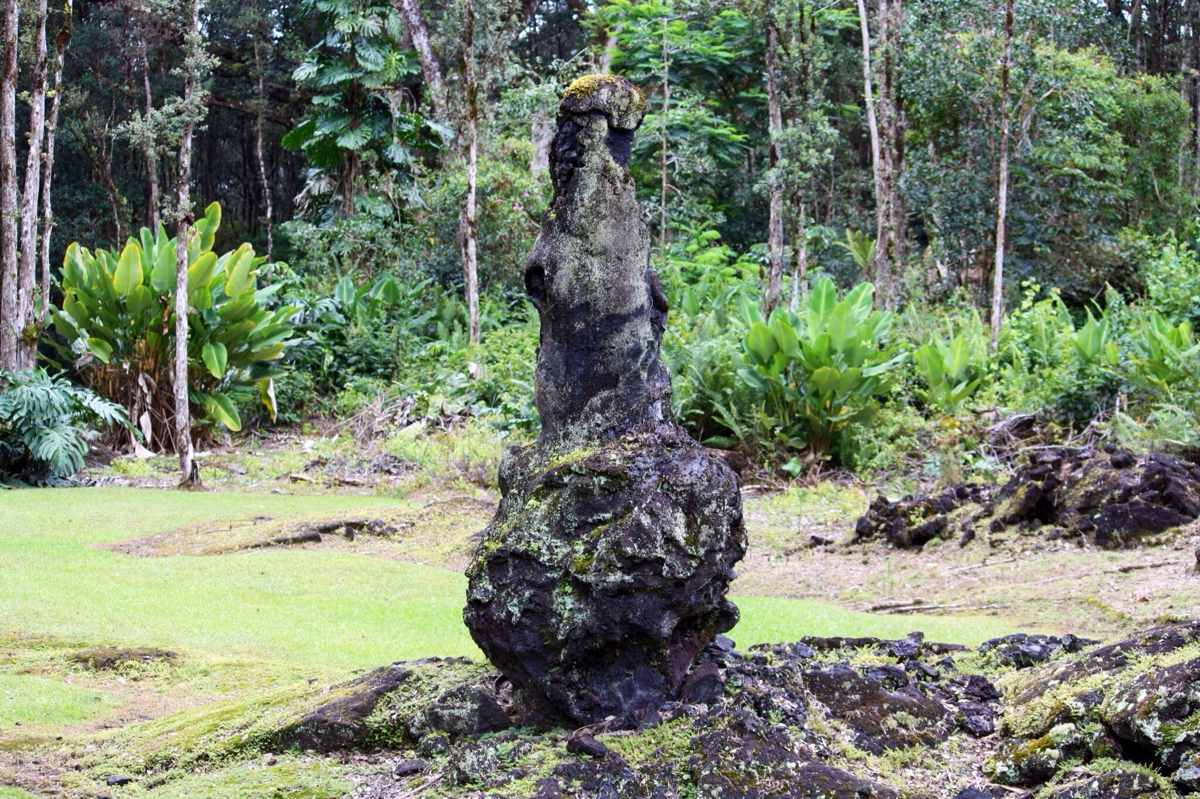 First stop: Lava Tree State Park. When the lava came through here it encased some of the local trees (the little sign says they were ohia trees). Now the trees themselves are gone and only the lava remains. The lava trees stand as faceless soldiers or sentinels for Pele, standing on eternal guard for her.

Next stop: The Hilo Farmers’ Market. On one side of the street it was primarily a flea market, and not of much interest to us. The other side of the street is where the action is. This is all the fresh local foods, some prepared, and some right out of the garden. I tasted many a food today including rambutan, local pepper jellies, macadamias, and even … 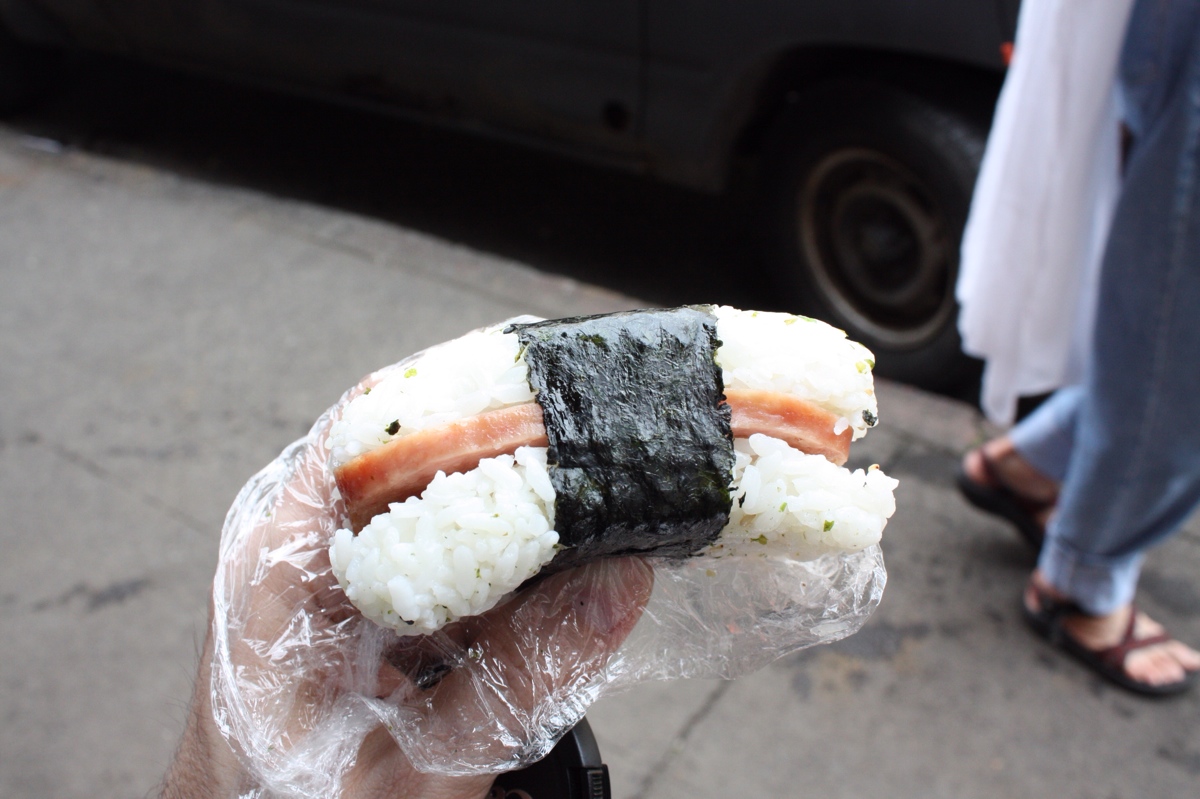 Yup musubi. That’s spam sushi to you and me. D also tried it. We weren’t repulsed. It certainly wasn’t the best thing I’ve ever eaten, but also wasn’t the worst. 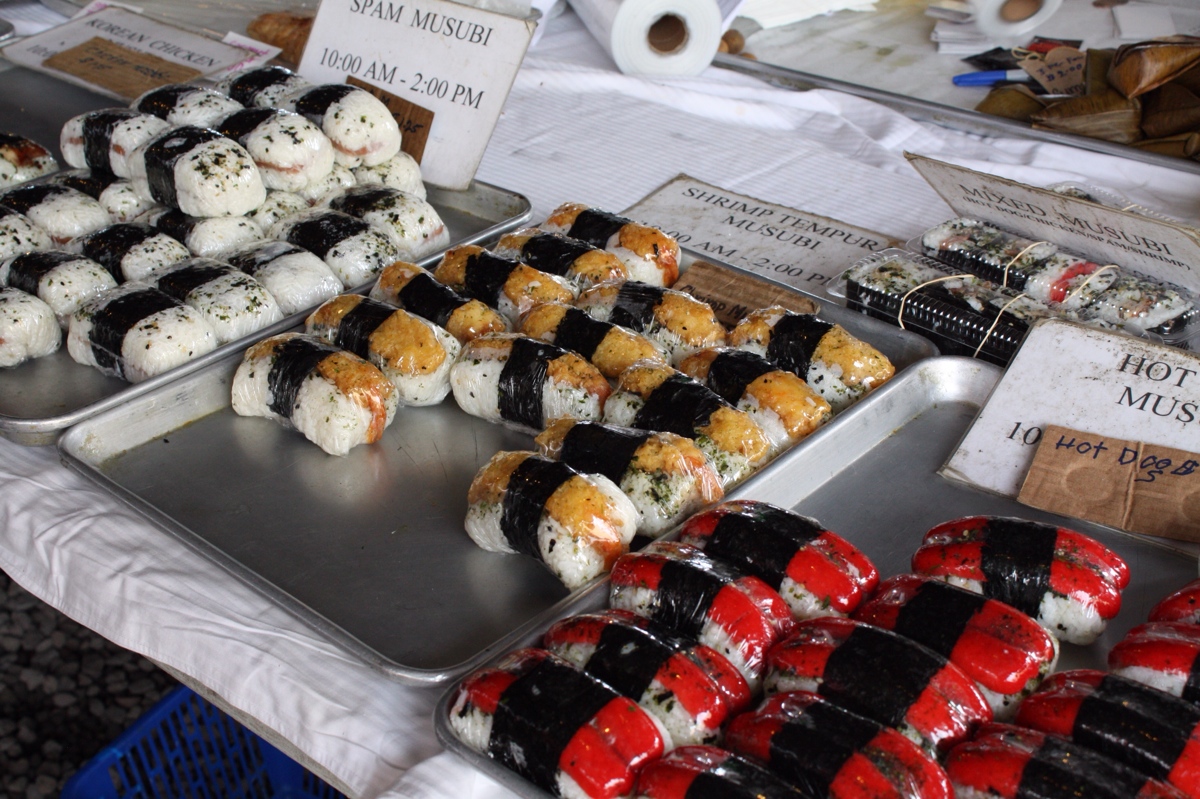 There were a few varieties of musubi, including korean chicken, spam, shrimp tempura, and hot dog. I had never seen fire-engine-red hot dogs before. They frightened me more than the spam did. I am told they are a local thing. 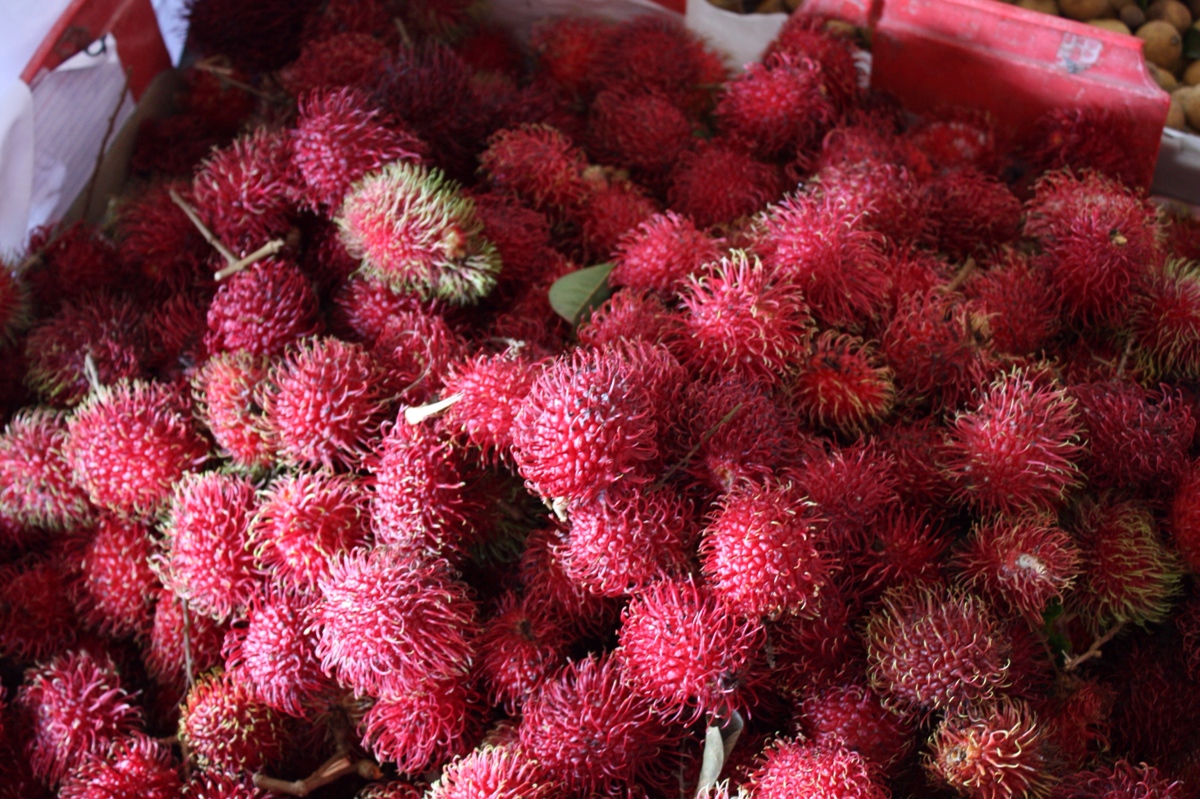 There was plenty of rambutan at the market 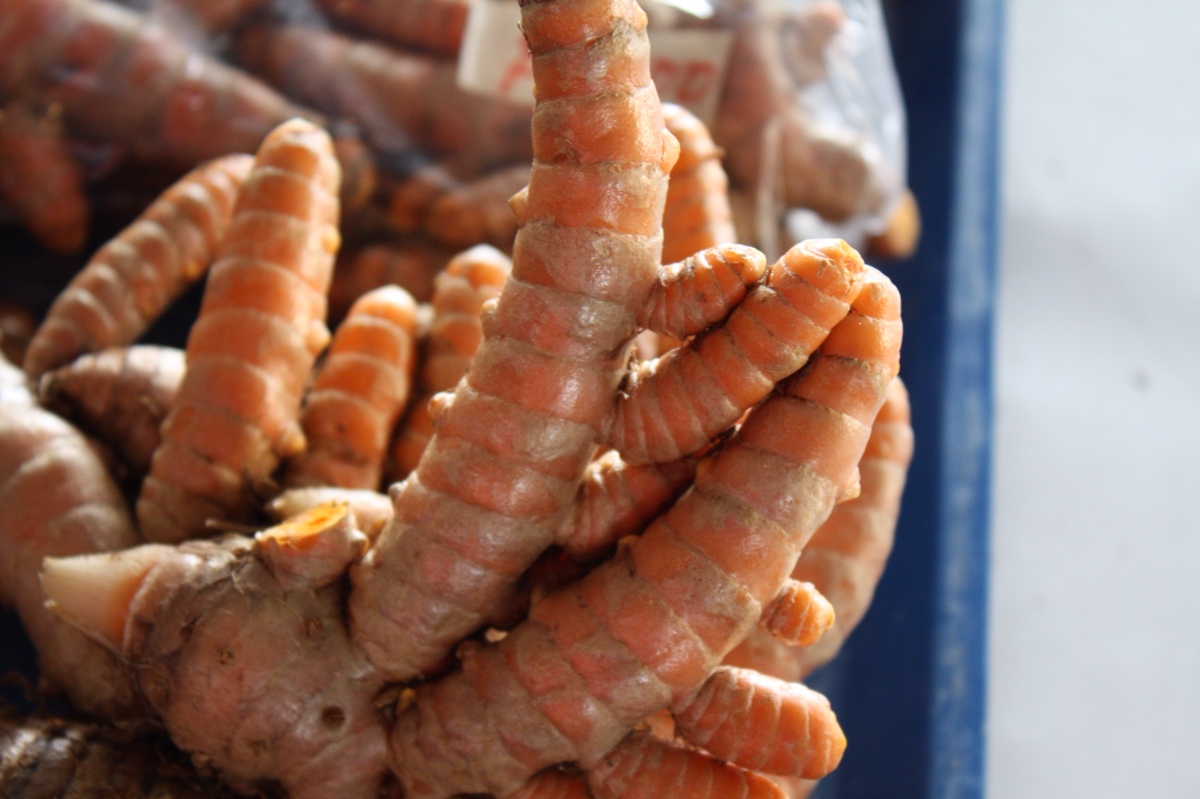 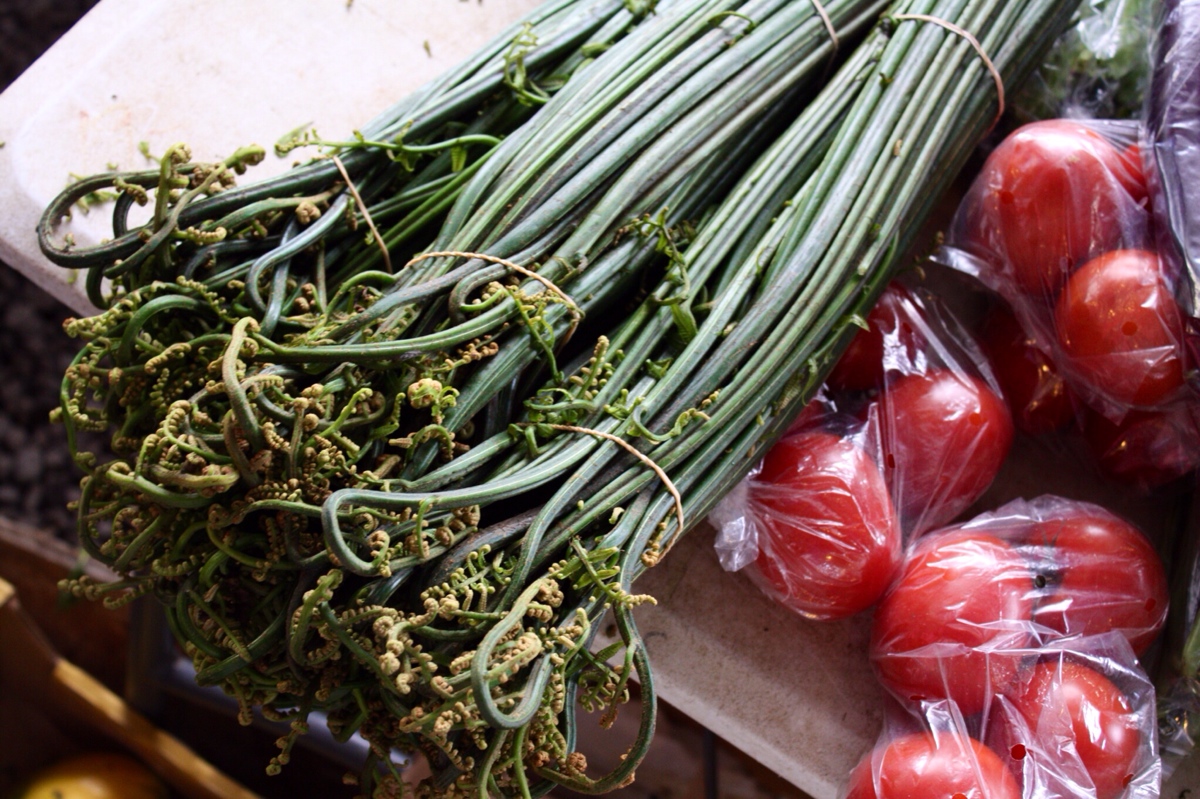 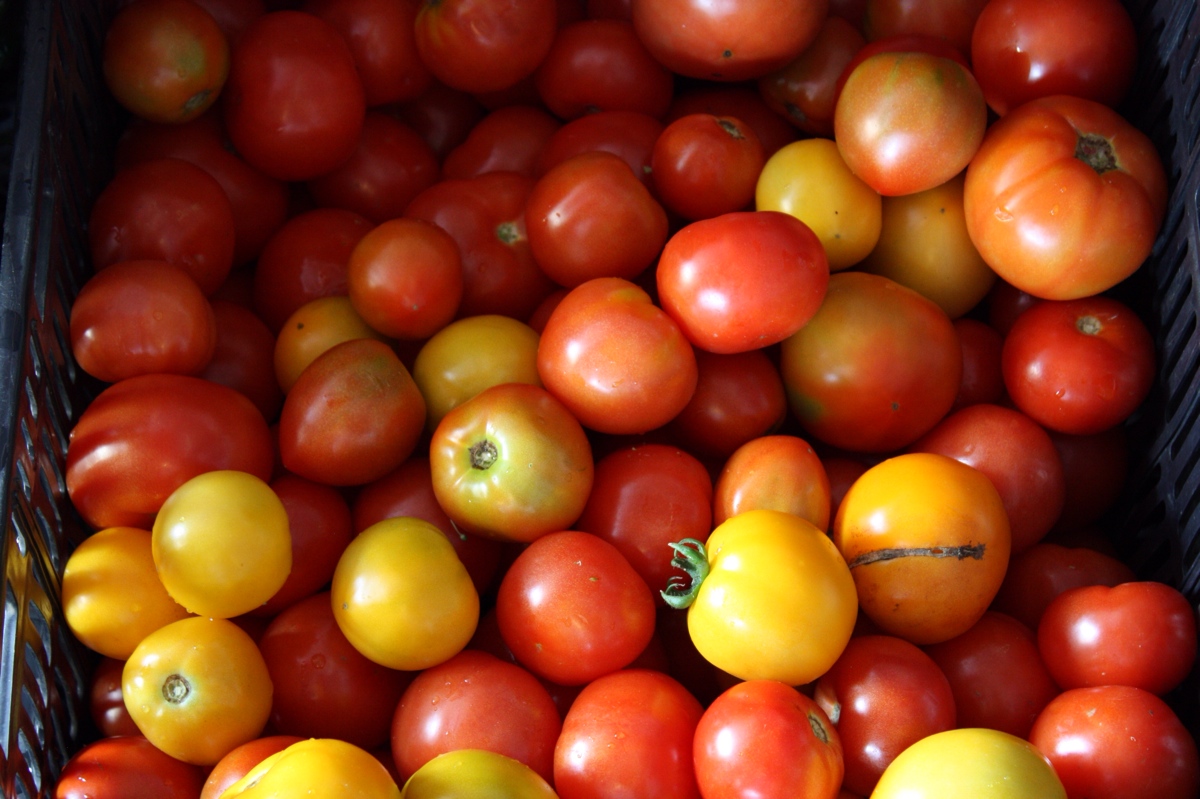 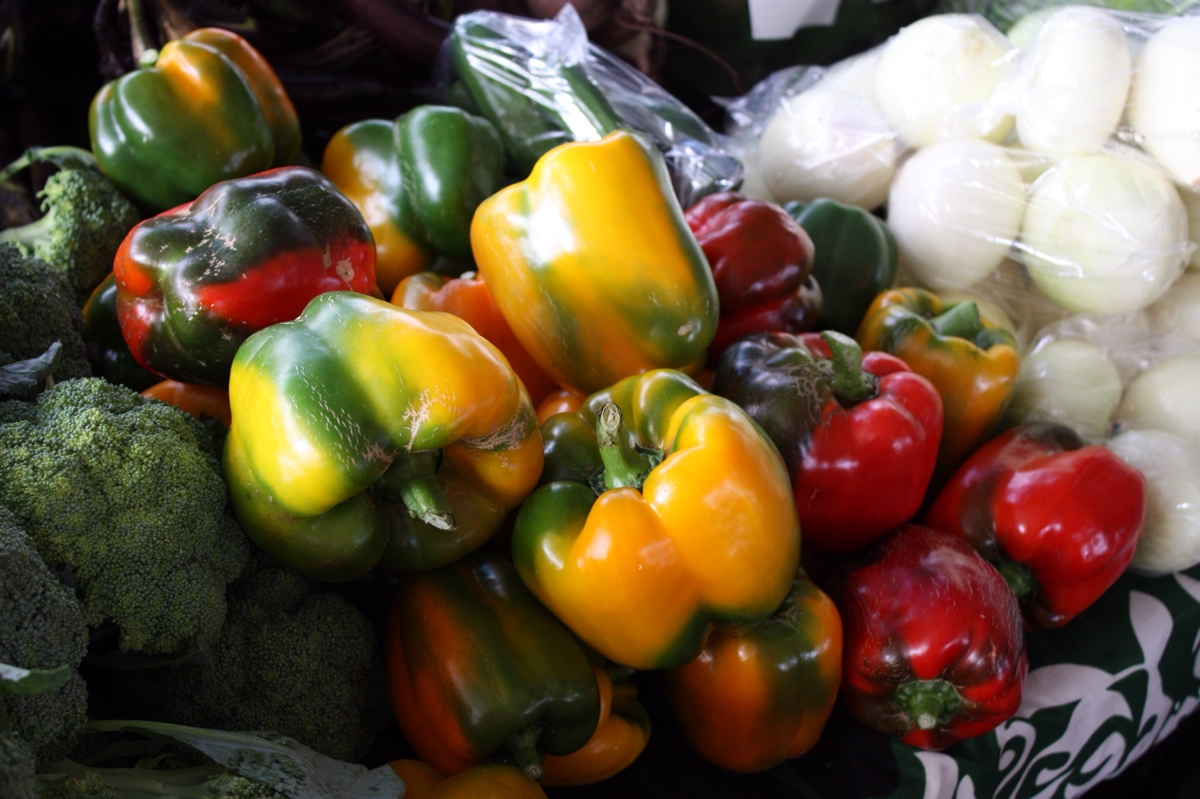 And lots and lots more. 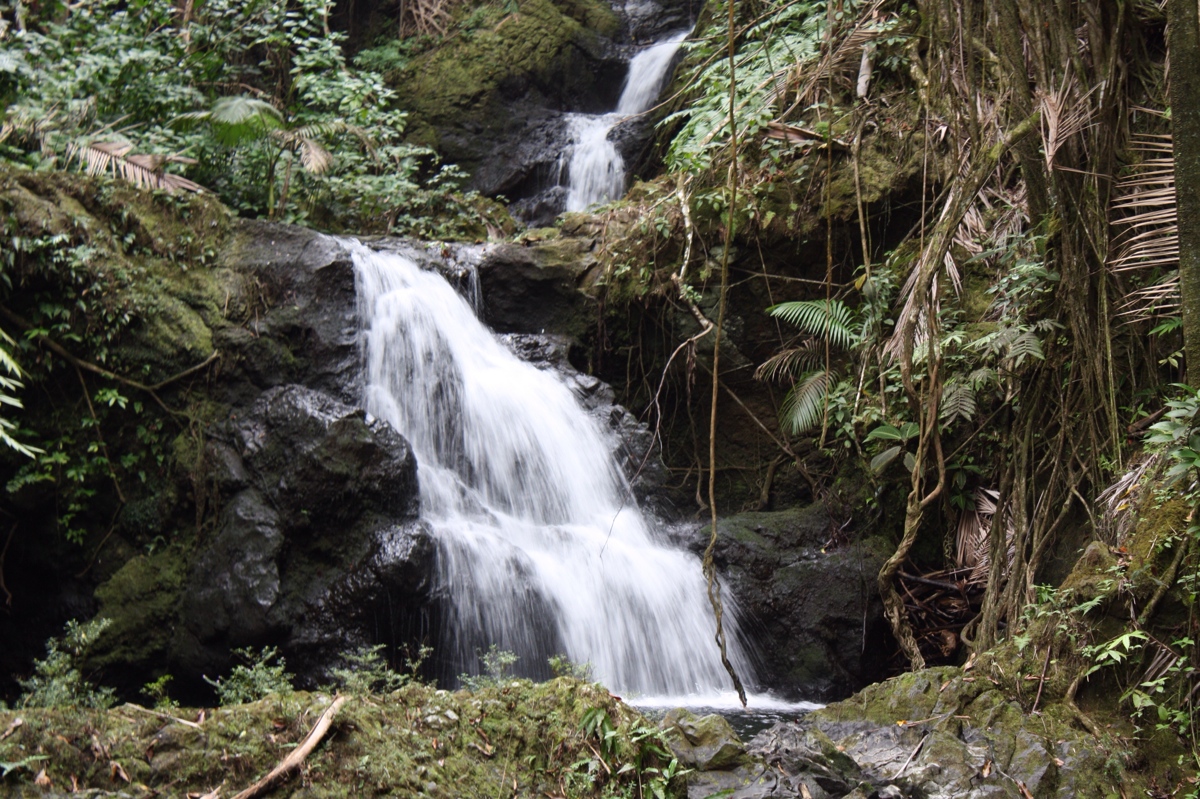 We completed our shopping in Hilo and then hit the road up the coast to visit the botanical gardens. I can’t really begin to express how beautiful the gardens were. Except for the spiders. I don’t like spiders. The spiders weren’t beautiful. Don’t get me wrong I understand how important spiders are, but they can just keep to themselves, thank you very much.

Come to think of it, I wonder if frogs eat spiders. I’m feeling better about the frogs now.

Here are some pictures from the gardens. 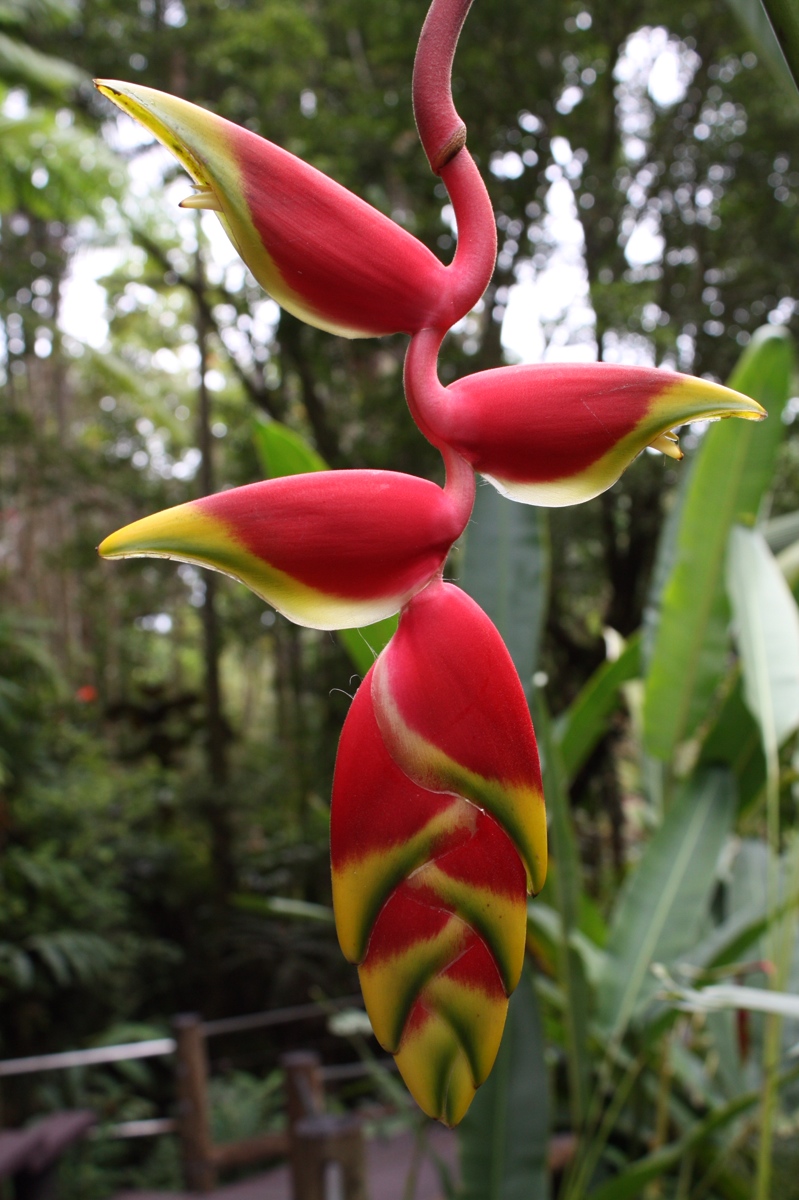 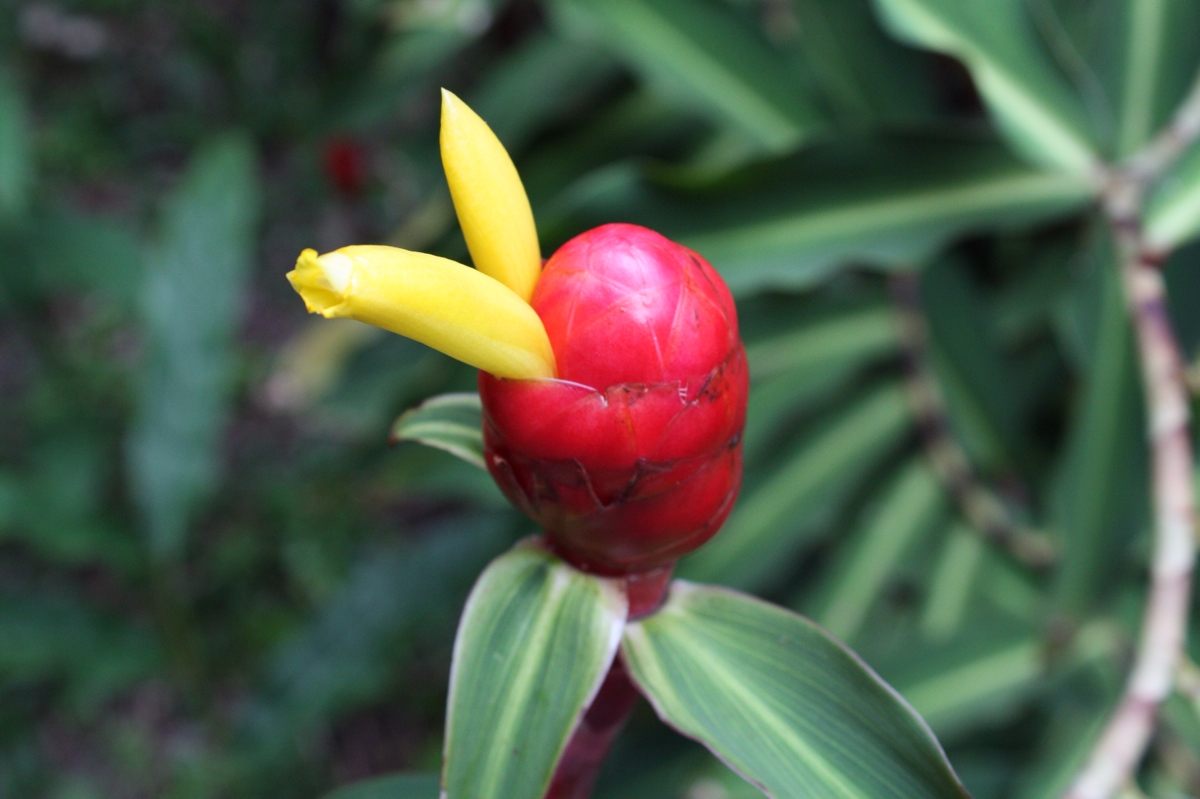 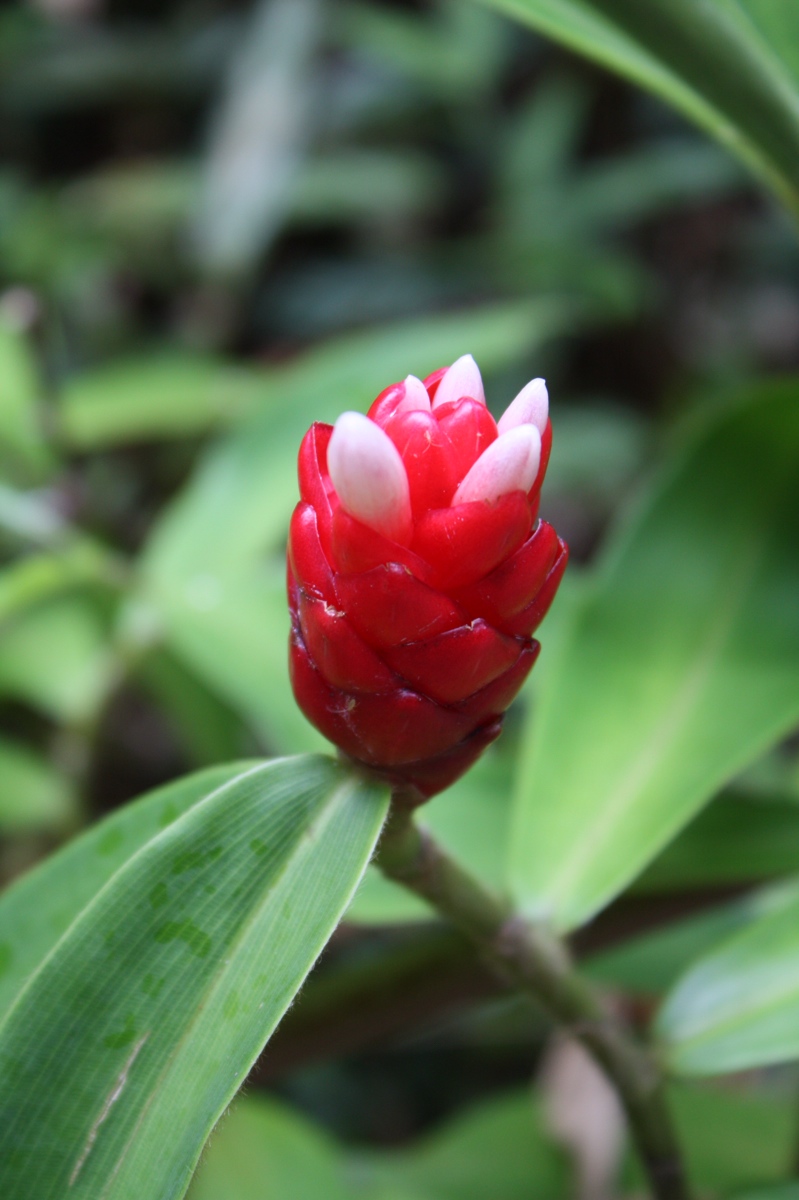 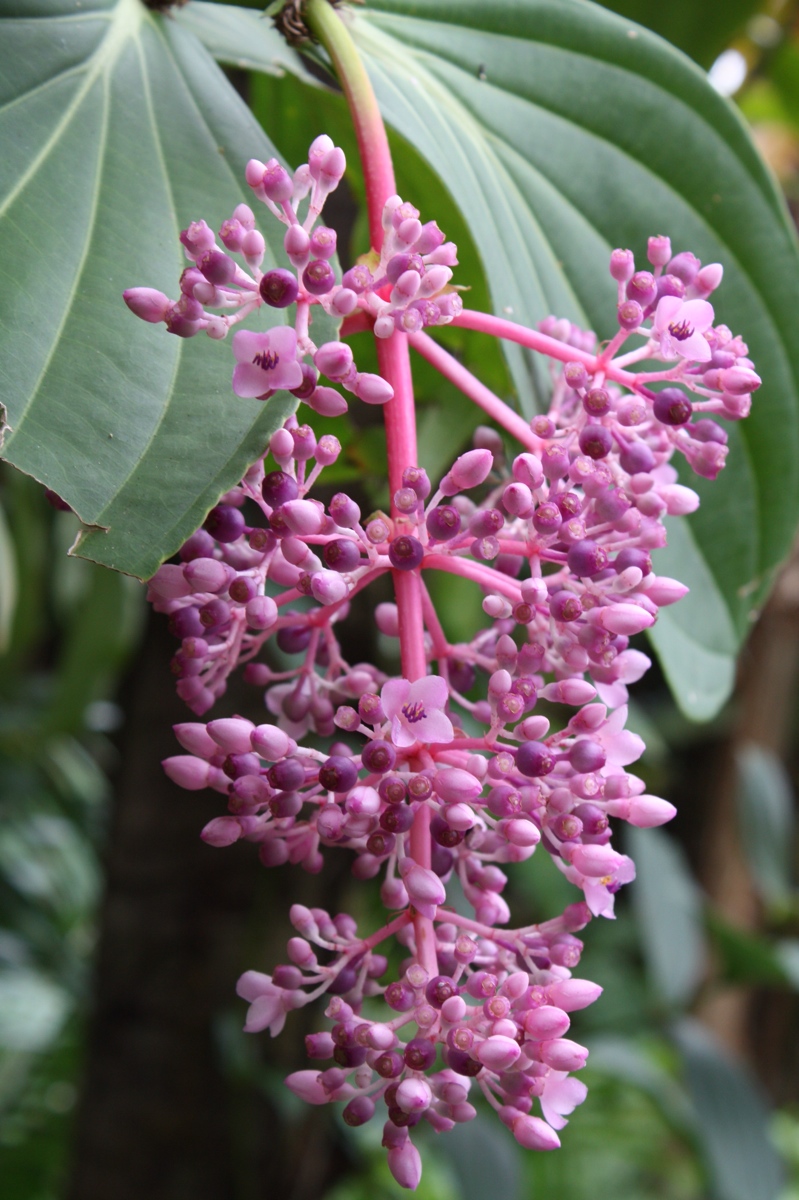 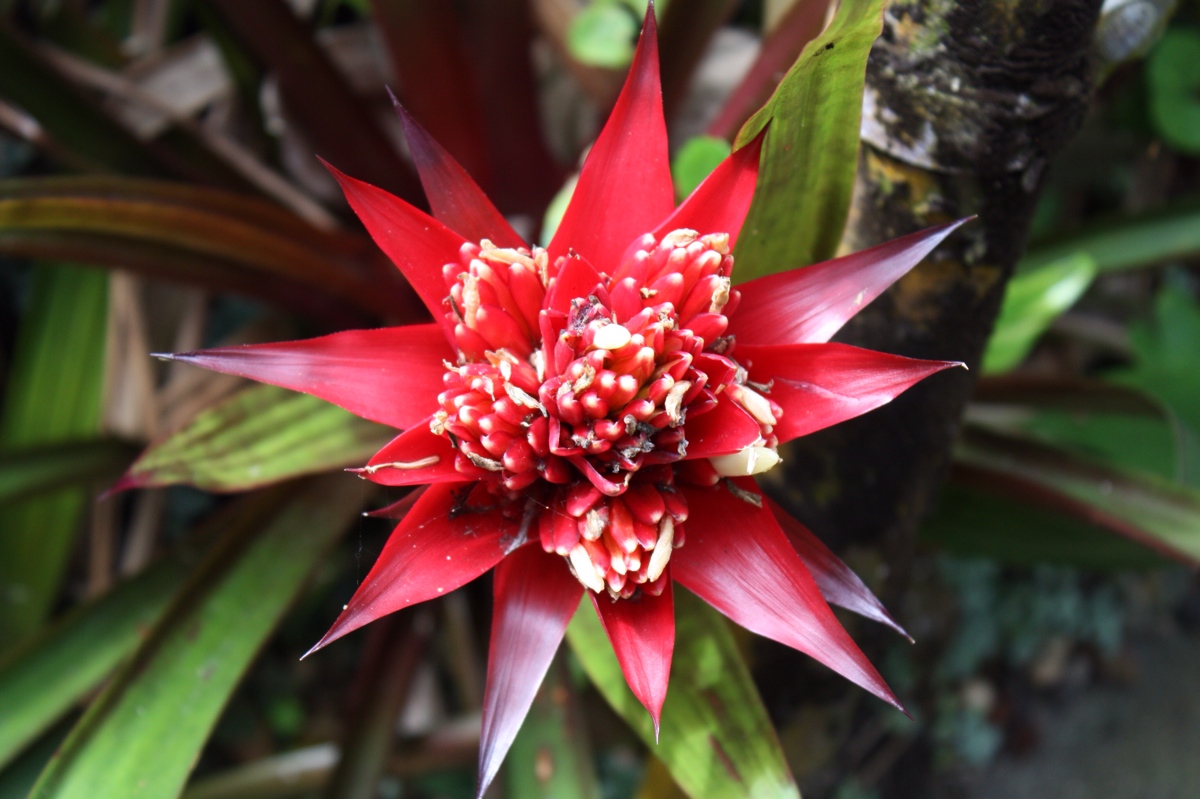 The exploration bug bit D here, so we turned off the GPS and started driving. eventually finding a sign for Akaka Falls, which we started to chase. 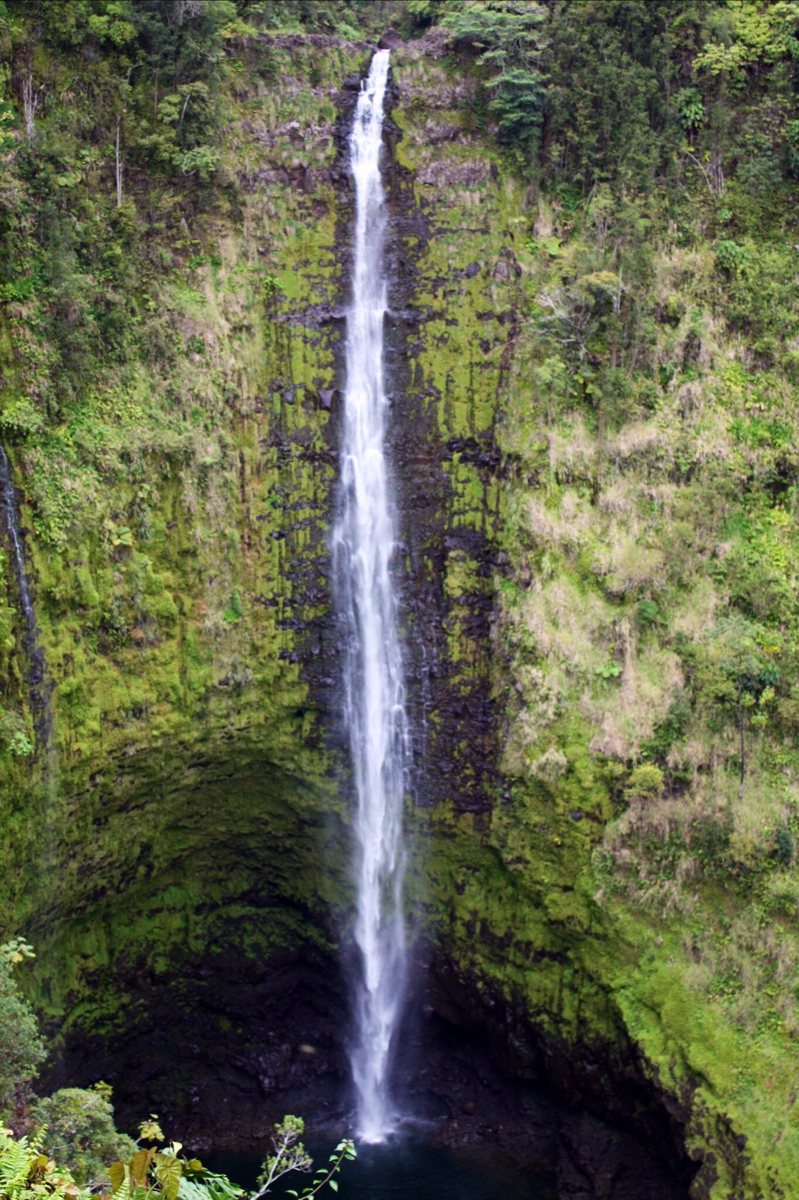 The winding roads headed up into the hills and around many a curve until finally we came to a parking lot, down which we found an astonishing waterfall, plummeting 420 feet to the valley floor. Photographs really don’t do it justice.

After visiting the falls, on the way back, we paused briefly at a roadside stand where they were selling chilled coconut. Right there they cut it open and stuck a straw into the coconut water. That’s the way to drink it! I had a delightful conversation with the women running the stand – one is a lay midwife and the other a doula. They gave me some local bananas to go (BTW better than anything we can get on the mainland!) and we were back on our way.

By now the sun was setting so we collected our belongings and set out for our new digs – which were a half a block away! D had booked the new place thinking it was a couple miles away, so we were both surprised when the GPS told us we had arrived at our destination after only making two left turns. The new place is much larger, with a small kitchen that we intend to use, but almost certainly won’t.

The new place also has no shortage of frogs!