There are some experiences that I only have when I travel with D.

For example – we got to visit a car impound lot this morning. Not everybody gets to do that. 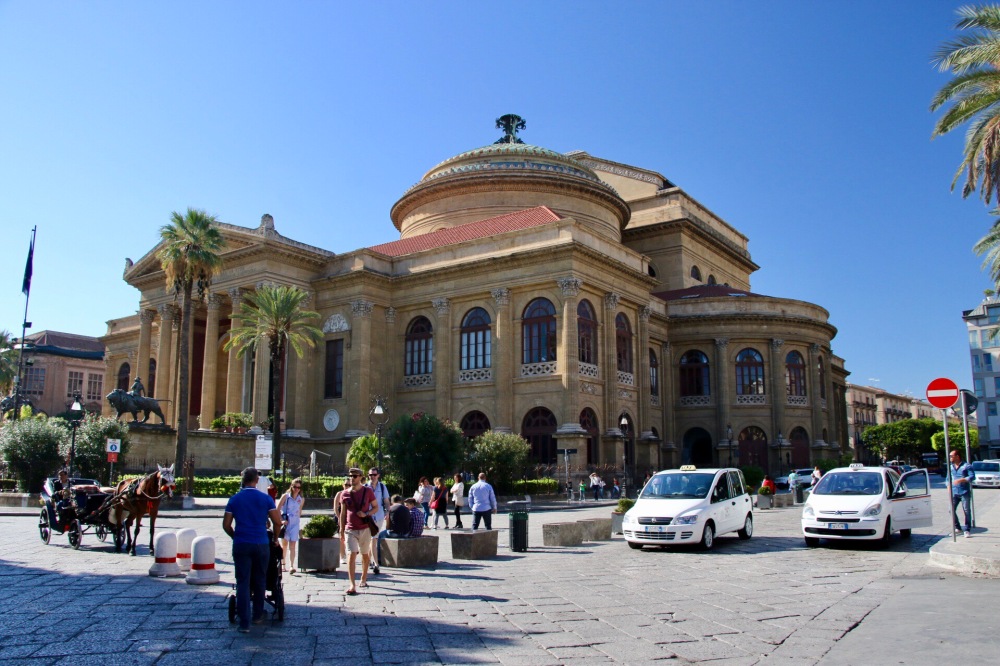 Our day had begun with a walk past the opera house (Teatro Massimo) to the Capo Market, in search of local specialties such as Sfincione, the Sicilian variation of pizza. This is what the guidebooks suggest, and certainly what we were anticipating. As we perused the stalls of fruits, vegetables, and seafood, D’s phone rang. It was the P, the proprietor of the hotel, who had gone to move the car from its overnight parking spot. The car wasn’t there.

Many possibilities went through our minds, including theft (this is Southern Italy, after all). P was headed back to the hotel, and D and I decided to walk to view the parking spot for our own edification. Halfway there the three of us crossed paths, just as P received a call from a friend. P knows a guy who deals with things like this, and apparently we were not allowed to use that parking spot on Sunday mornings (we didn’t read the sign) and the car had been “moved.” Given that we likely now had secure parking we debated leaving the car there, but thought better of it. 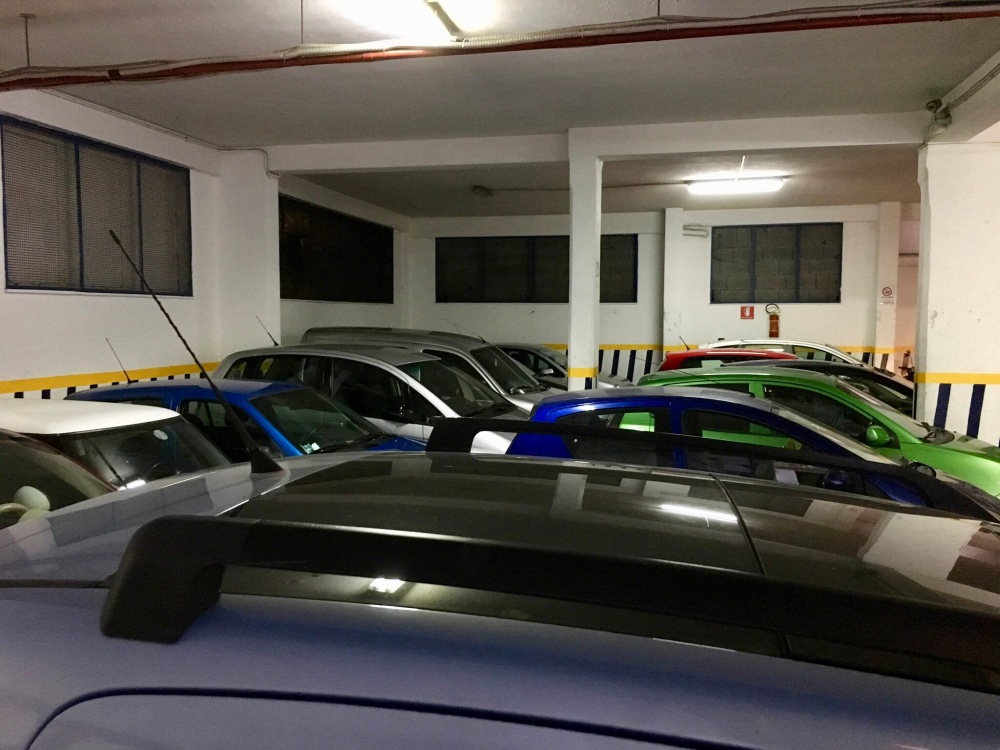 The impound lot, which consisted of the basement of a building, was a few blocks away, and the business was quite active, so they were anxious to move our car because they had others that needed the spot. After paying the impound fee (but not the ticket – our third in Italy) we were on our way. P dropped us off back at the market, taking the car to his own private parking area. 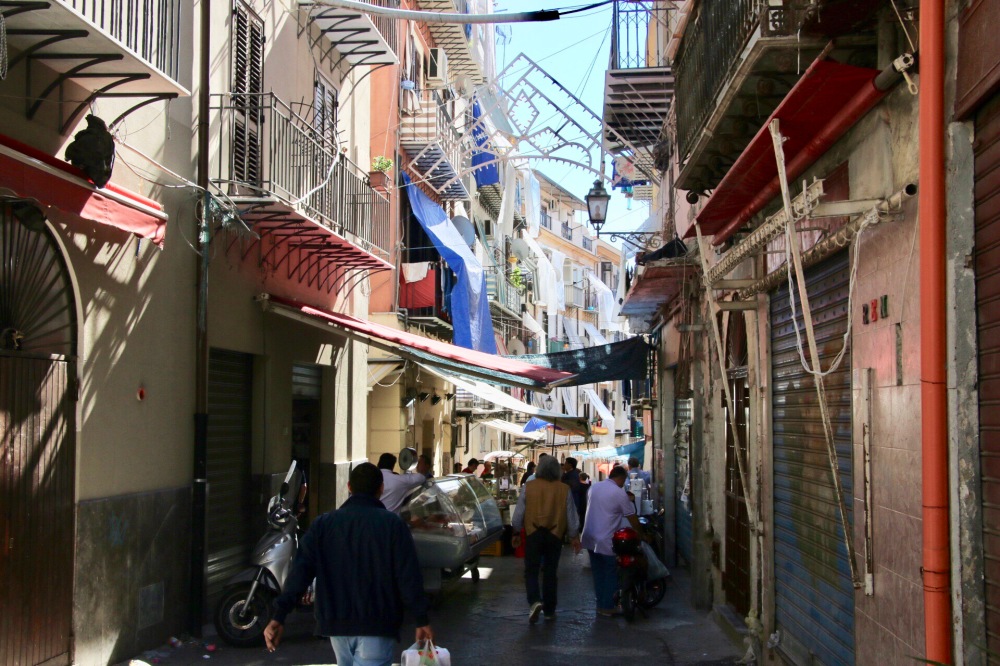 The market is in one of the oldest neighborhoods of the city, its stalls scalloping the edge of an ancient street. Above, sheets of plastic and lace hang from balconies, either to dry or to shield the apartments from the blistering mediterranean sun. 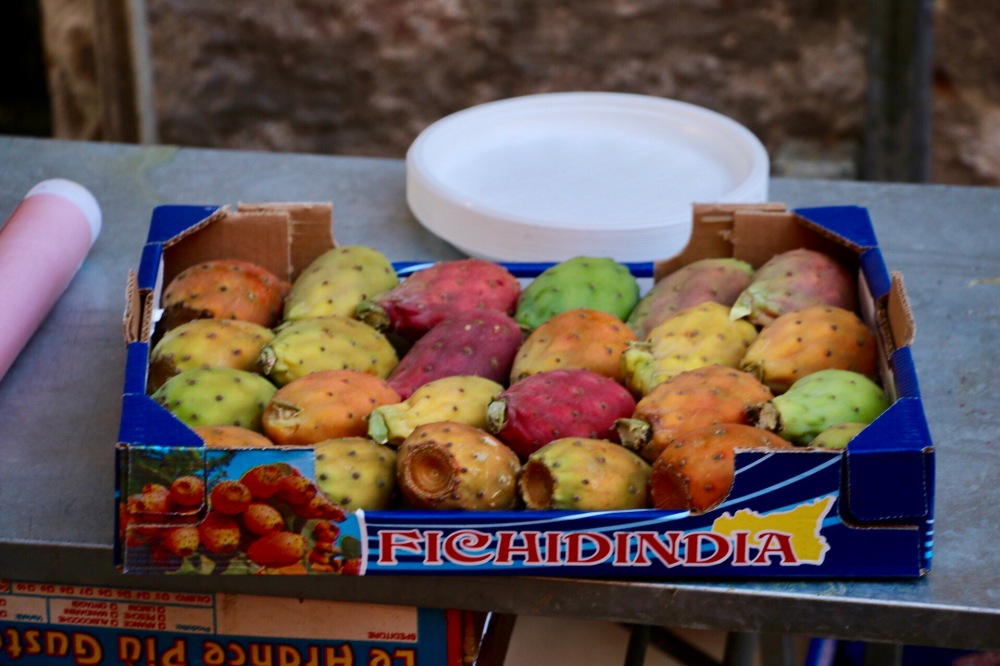 Below, we found exotic fruits and vegetables, such as these gorgeous prickly pears, opulent gems arrayed in a cardboard box. 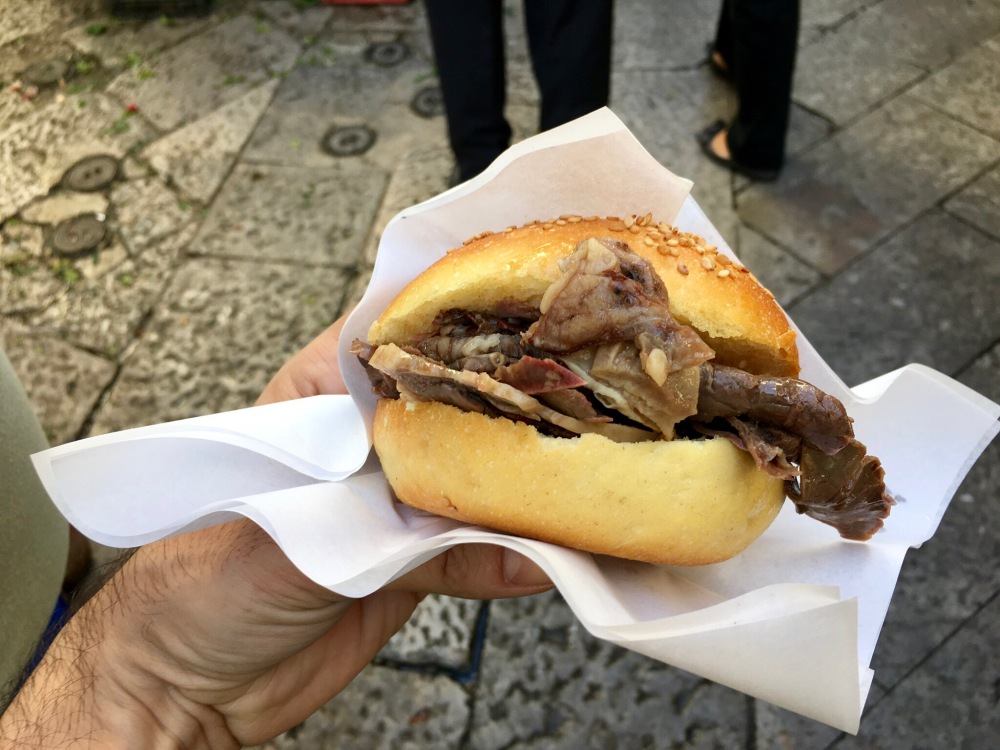 And I found this sandwich. I’ve had one once before – a pani ca meusa. Palermo is famous for her street food, and this sandwich, featuring beef spleen, is one of the more well-known items available. There is a process to assembling the sandwich.  As the bun is cut, a napkin is laid over the bottom bun. The meat, which is cooked in oil, is then dished over the napkin/bun, so that plenty of oil is transferred, but not too much. The top then goes onto the sandwich and the napkin is discarded. Finally, the sandwich is finished with salt and lemon juice. It was delicious. 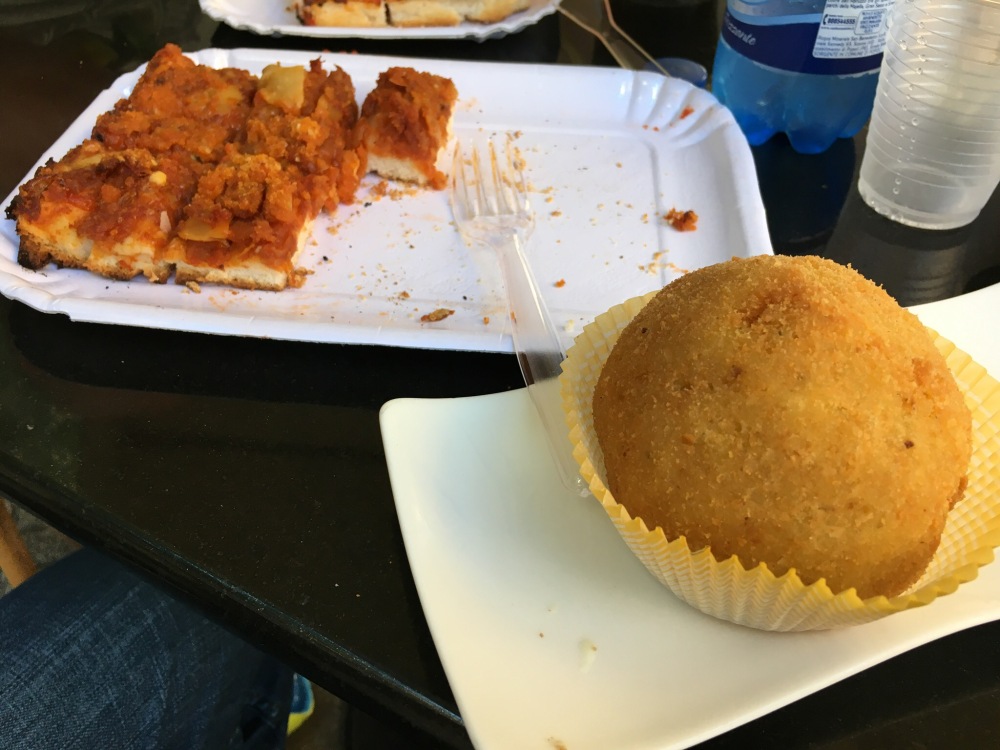 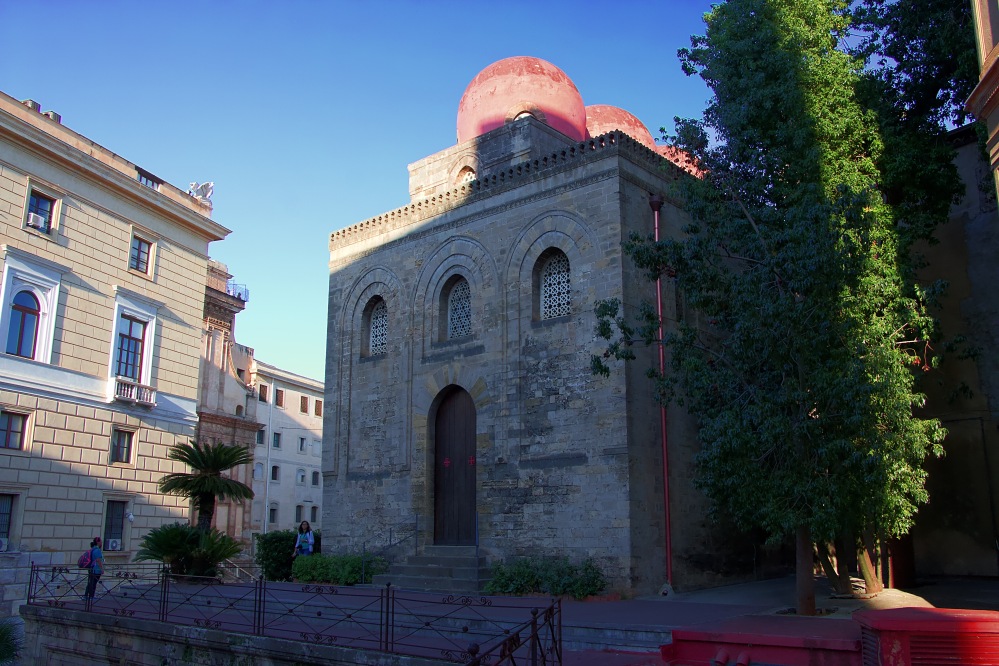 The afternoon featured more wandering in the old city. One of the most visited sites is the Church of San Cataldo, standing as a unique fusion of Norman and Arab architecture. I’ve been here before, but never inside. 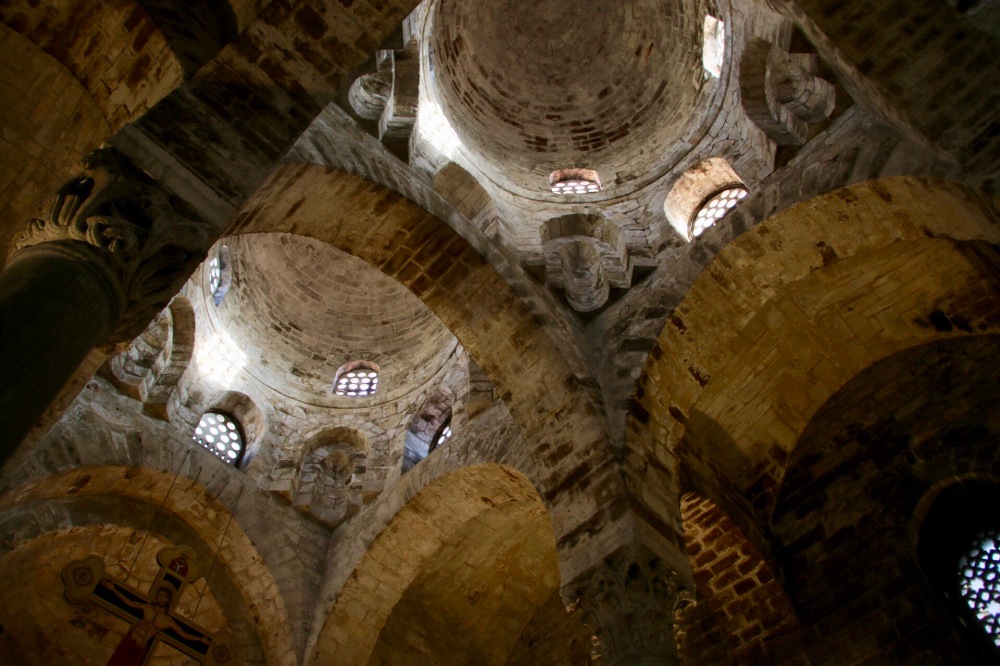 Within, the structure is barely finished, its raw bones showing throughout. The narrow domes rise unfinished, their whitewahsed brick glowing in the sunlight glancing through the windows. It is stunning. 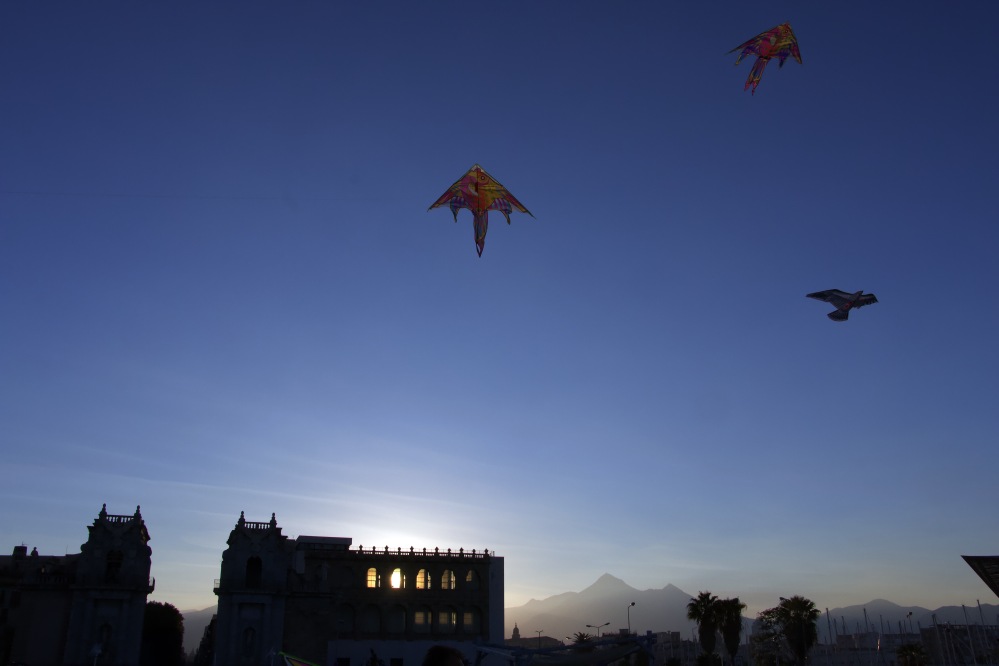 Beyond the church, we continued our walk to the harbor, where eventually we found a public park in which a vast crowd of locals had amassed. Here, we sat for a time, resting our feet, as all around us children flew kites while the sun set behind the distant mountains. We finally stood up to watch some sailboats and ferries moving into and out of the harbor, before finally heading back to the hotel and to dinner.

For our return trip, we didn’t follow our initial route, instead diving into side streets that cut through the old city, curving and intersecting at bizarre angles and ending in tiny piazze. No modern city would be designed this way. But Palermo isn’t a modern city – she is, instead, a feisty old lady of a city. She awkwardly splashes on some makeup occasionally, but really doesn’t have time for it. Instead, she shows off her wrinkles and doesn’t care what anybody thinks of them. She is chaotic and lovely, with an unpredictable beauty. She isn’t perfect, but she doesn’t pretend to be. She is, simply, Palermo.