There was some sort of animal living the ceiling of my bedroom last night. I don’t think it was a large creature, but rather a small one. Perhaps a burrowing insect of some sort – maybe even a family of termites or carpenter ants – I’m assuming they have some variety of both here. Whatever it is, it created a sort of a low frequency rhythmic grinding noise that greeted me this morning. I could tell a general location, but decided not to investigate further. 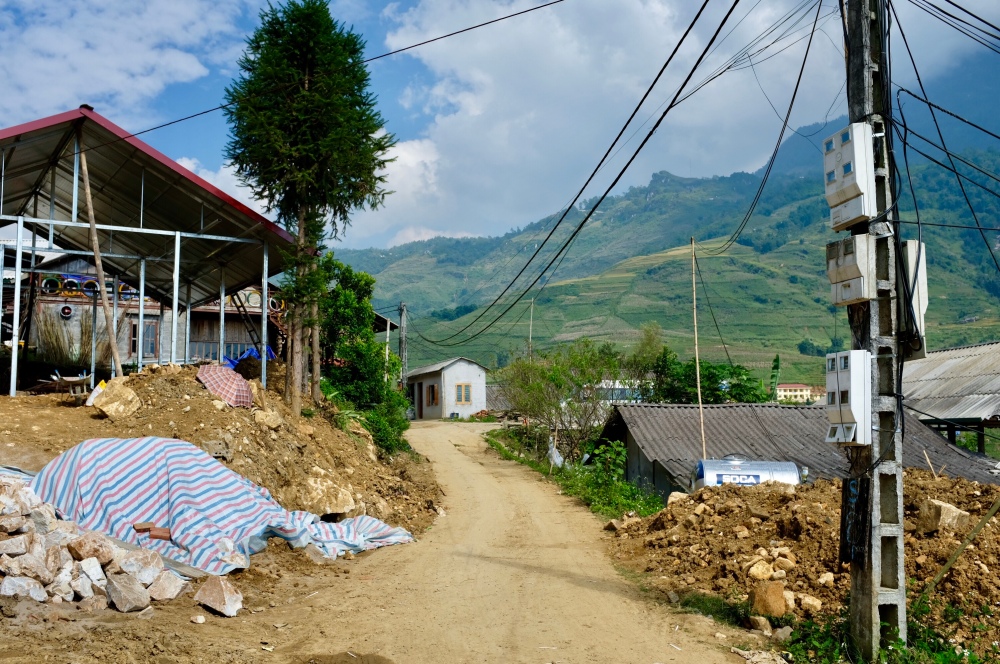 P returned to pick me up this morning, and after a light breakfast of bananas, crepes, and honey we were back on the road, first backtracking for about a quarter mile, but then veering left and up into the hills. 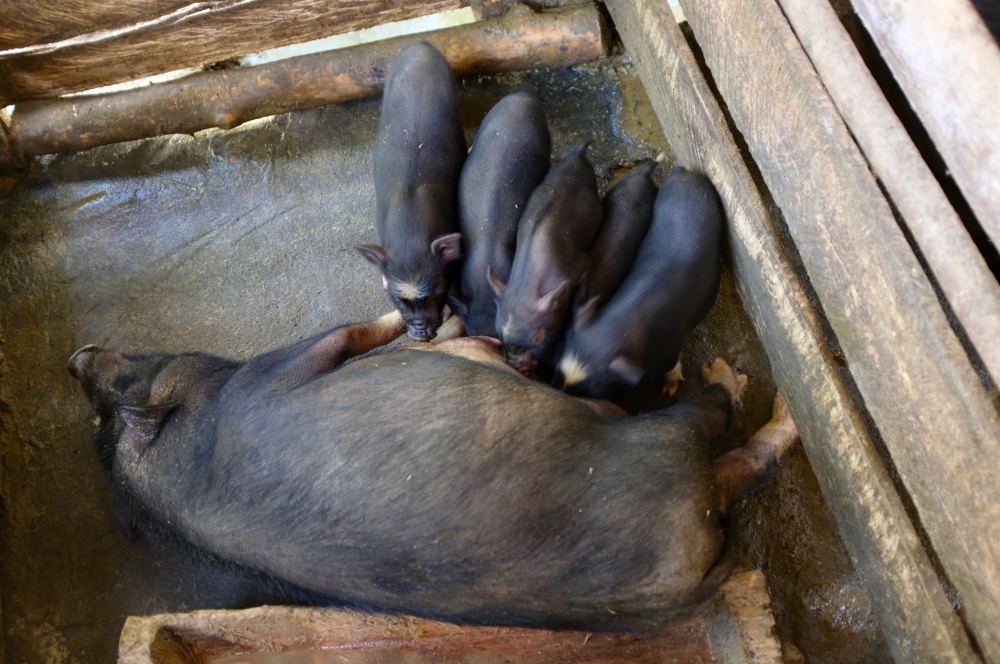 The climb was rather steep for a few minutes and leveled off about the point we ran across these five little pigs nursing quite noisily. They were adorable. In the pen next door there was another pig, which P declared would be the New Year’s pig. I don’t know how she knows this, but she seemed very confident.

Today’s hike is to be shorter than yesterday, so P takes her time, and we stop frequently with other hikers on the trail, and eventually we travel together with another guide and a couple from Ireland. I find it reassuring that I am not the only one struggling with the unstable footing, although the two of them carry bamboo walking sticks. I am missing my hiking poles here, but now won’t give in with so little time remaining.

We move higher into the mountains and into the bamboo forest. P tries to explain to me something about the harvest, which I think they do every two or three years, and she talks about how they use the bamboo, but I am not certain exactly what she is trying to say. Her accent is very thick and I struggle to understand her at times. I honestly don’t intend this as a criticism, but more as a statement of fact, and it says at least as much about me as it does about her. She told me once that she learned English on her own, which is pretty darned impressive, particularly when one considers that she seems to have limited literacy in Vietnamese.

For some humbling perspective, I can say “thank you” in Vietnamese. Sometimes. If I say it the wrong way, however, I am saying “shut up.”

Yesterday we didn’t encounter many rivers, but here in the mountains there are quite a few. P states that most years many of them would have dried up by now, as the rainy season ended in September, but the season was especially wet this year, so the water will last a while longer. 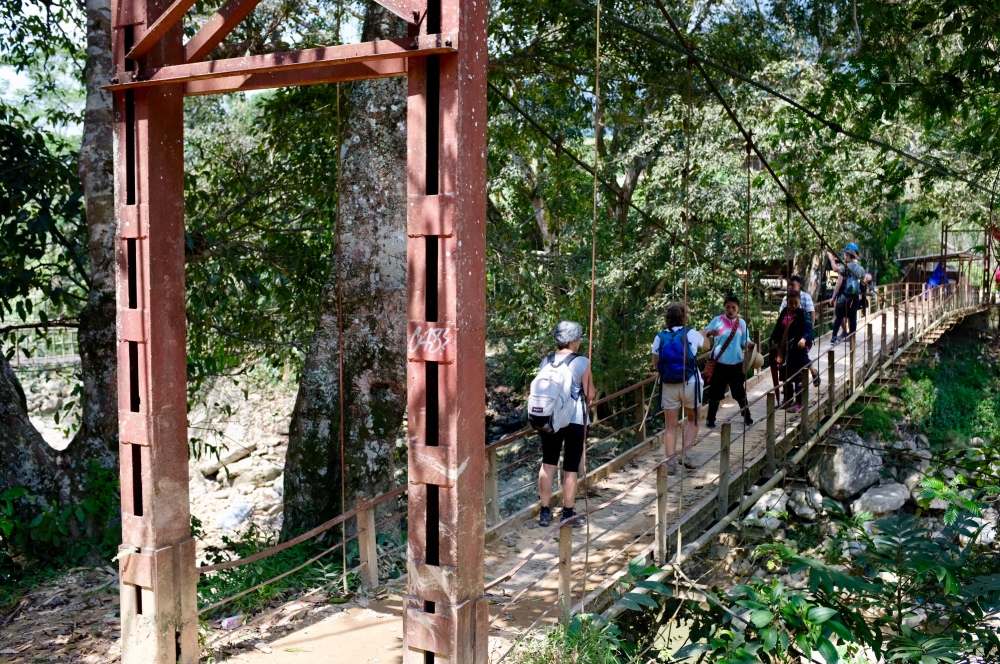 I’ve crossed a number of bridges like this over the years. They always sway a bit precariously.The first time I experienced it, I was a bit trepidatious. Now I look forward to it. 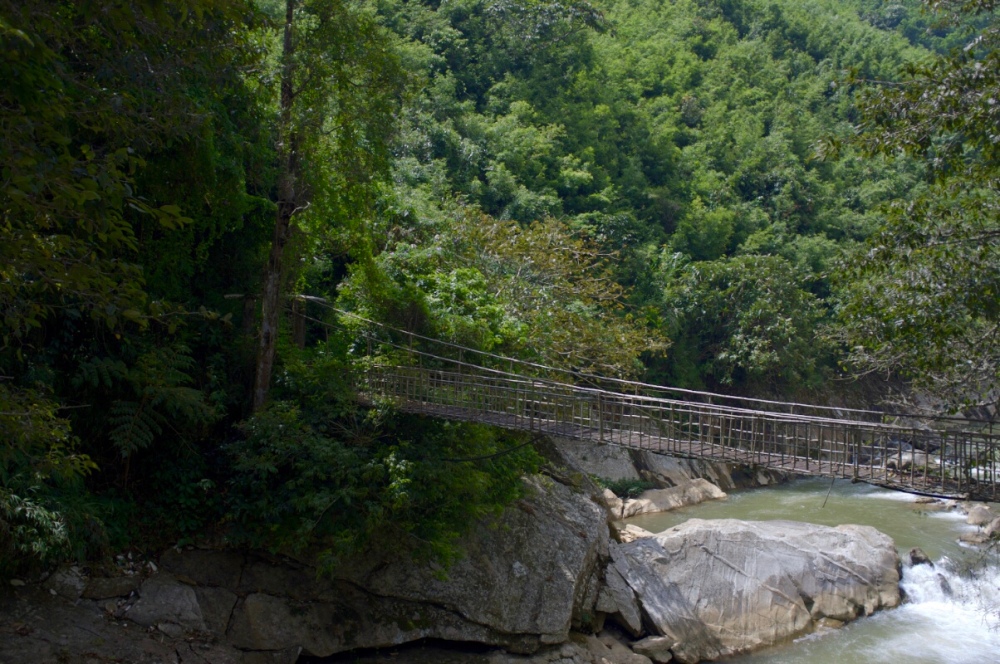 Here is the old bridge. When the water is lower, people just ford the river and don’t use the bridges at all. But when the water is high, the children sometimes get washed away. P states this very matter-of-factly. The death of children is something they seem to be all to familiar with here.

Higher we go, P still leading with her parasol. 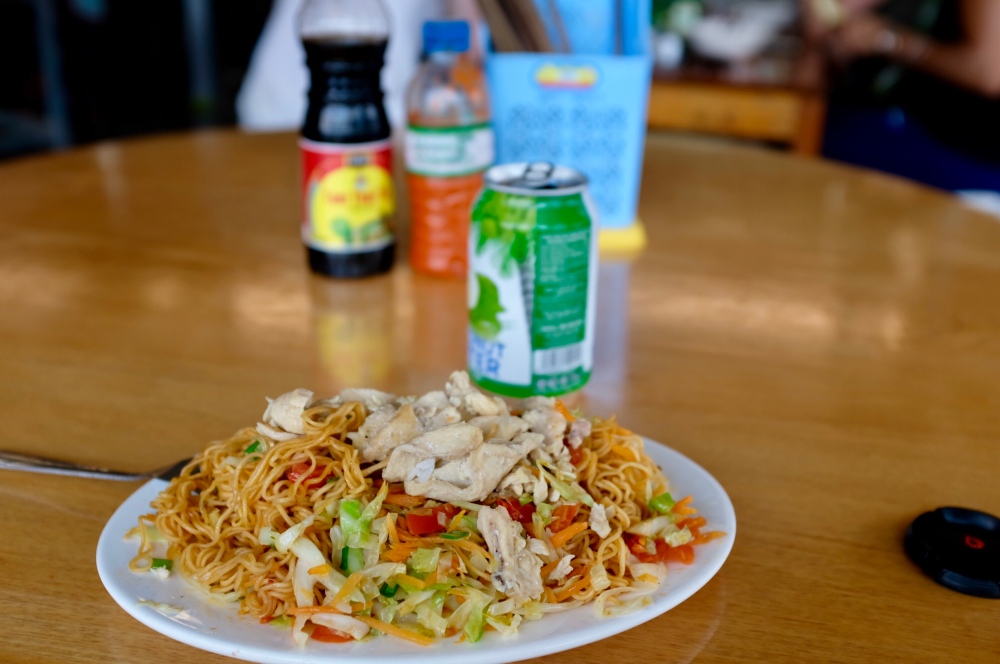 At 1230 we finally stop for lunch, in this case fried noodles with chicken. And the best coconut water. Ever.

P’s daughter joins us for a bit. Just like her mother, she is petite. At 11 years old, she is also shy. P explains that unless a tour brings her here, she doesn’t get to see her children during the week. P and her husband live a long way from school, so rather than have the children make a lengthy odyssey every day, it is safer if they live at the school. They pay extra for this, but it is worth the security. Regarding the educational system: all children here can go to primary and secondary school. Anything beyond, I am told, must be paid for. She is working to be able to pay for her children to go to high school so that they can have a better life.

After lunch we return to SaPa town, where I am left on my own to explore. Once one gets away from the hiking stores, the town is much nicer, and it begins to remind me of numerous other alpine resort towns I have visited: Aspen and Innsbruck come immediately to mind. 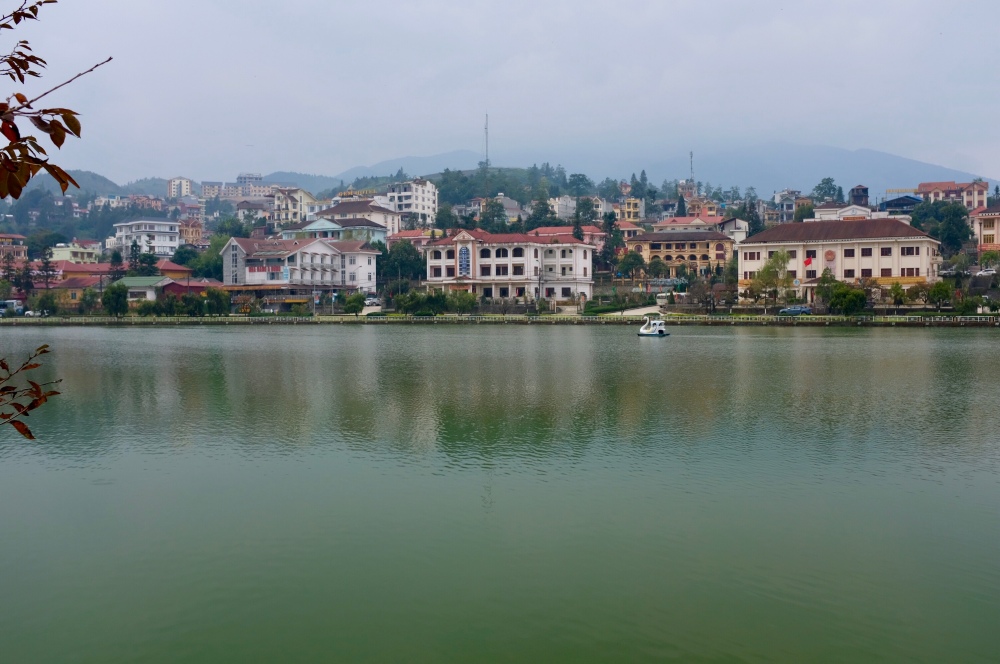 There is even a lake with swan boats for those who wish to paddle around.

In the center of the town, children are playing soccer in the square, and I sit down to take it all in. I was surprised, then, when a 12 year old boy sat down next to me to talk. Tu is not shy. He is friendly and curious. His favorite subjects in school are Math and English. His English is fantastic.

When, finally, I had to leave to catch my ride out of town I told him “thank you” in Vietnamese.