I’m at the cottage today, and we decided to throw together some dinner. Somebody suggested that perhaps we should make the frozen pasta that was in the freezer. I was less than enthused about this. F didn’t want hamburgers, and I just wasn’t feeling the steak Mom suggested. We are eating chicken tomorrow, so unless we wanted to go out, that left pork, fish, or other less-common proteins (or avoidance of a protein altogether).

I proffered the reference recipe of pork loin wrapped in pancetta. No pancetta was to be had at the market in Brooklyn, MI, so I bought a pound of bacon. Further, because there were only 4 of us, and because it would cook more quickly than loin, we chose pork tenderloin.

At this point, nobody knew what I had in mind. I laid out a sheet of plastic wrap and made a lattice of bacon. After marinating the tenderloin briefly in herbs and oil, I wrapped it in the bacon lattice and used toothpicks to hold everything together. It was beautiful. I roasted at 375 to an internal temperature of 145. 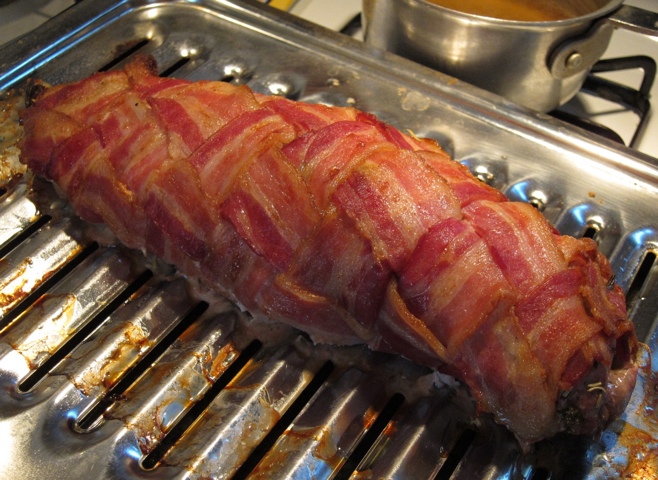 When it came out of the oven, the bacon was a gorgeous color, and the meat was tender and succulent. The only negative was that we had placed water in the bottom of the drip pan, and that meant that the bacon on the bottom of the roast ended up steamed rather than crispy. It was still delicious, but a negative on texture. Live and learn. When I make this again, I’ll deal with the smoking drippings – better than soggy steamed bacon.