To start the day today, I put my map of London in my pocket, then wandered out to see Westminster Abbey. After waiting in queue for a half hour or so, I paid my admission and entered the abbey. Included in the price of admission is an audio guide narrated by Jeremy Irons. He has a very calming voice, which is fitting for the church. It helps tone down some of the hurly burly of the throngs of tourists swarming the cathedral.

After that I wandered around the area for a bit and ran across a group of stormtroopers in the park, which was absolutely brilliant!

At noon I met up with C for lunch and shopping at Harrod’s. I scoured the gift shop for souvenirs to no avail. We went up and down the beautiful Egyptian elevators. They are just incredibly over the top art deco. Remarkable! And on the ground floor there is a shrine to Diana and Dodi. I would have taken a picture but it felt sacrilegious somehow.

We still needed to eat, so scoured the list of restaurants in the store. I think there are 31 or so. We finally decided on the Veuve Cliquot Champagne Bar, since they had some light meals available (we weren’t just going to have champagne for lunch, inspired though it may seem!).

Well, we probably had a drink too many, but the champagne was nice, and the glasses were beautiful. In order of preference, I liked the 2002, Yellow Label, Rosé, and Demi Sec.

As far as the food is concerned, the waitress recommended chicken satay. It was good. The sauce was the best I’ve had. But it was still chicken satay. Relatively anticlimactic.

We also has the pastilla, which is basically duck and foie gras wrapped in phyllo. Wow so good. So so good. A nice duckiness. The better of the two mains

We finished up by ordering dessert. They had nothing in stock, so the waitress comped us strawberries and cream. They were really nice. Perfectly ripe, sweet strawberries. Not my first choice, but well worth the price.

After an afternoon spent shopping we found ourselves having bread and cheese at Gordons Wine Bar on the Strand somewhere, The New Zealand Pinot Noir was outstanding. The cheddar was soft and lightly smoky, the manchego was just a bit sharp and nice. And the potatoes were awful. Worst ever. Absolutely devoid of flavor. To make something so thoroughly bland must take real talent. I didn’t eat many of them.

Finally we finished up the evening at St John Restaurant with Christine and Mathias. I really like both of them quite a bit. They are a great deal of fun. We started with champagne at the bar (again!).

Once we started eating, the first course was bone marrow. It was served with toasted bread, salt, and parsley. This was a revelation. A totally new food to me. The fat of the marrow is almost like a meaty butter on the bread. Just spectacular. 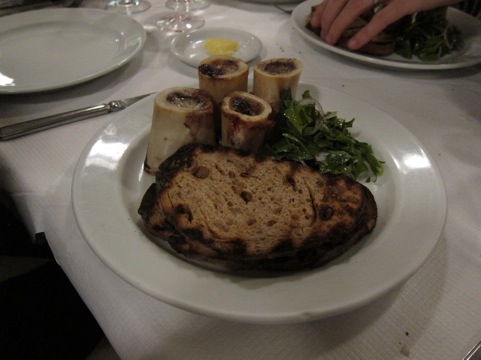 Then the mains came. I should preface this entry with the disclaimer that St John specializes in nose to tail eating. Offal. I left it to the chef to decide, knowing that there were kidneys on the menu. The way I figured it, if anybody in the world was going to make kidneys that I could love, this was it. They were served with a vegetable puree. In the end, I did love the kidneys – some of them. At their best they were tender and juicy and really flavorful. But, then again, some of the kidneys weren’t as enjoyable. Consequently I had trouble enjoying all of this dish. 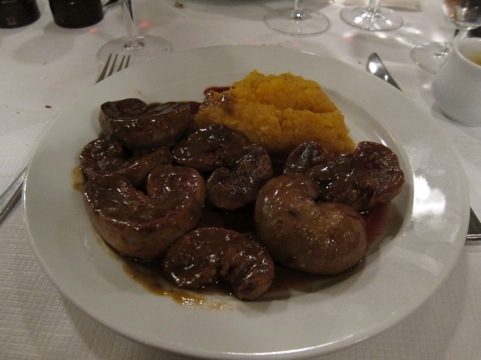 Any regrets? Not in the least. If I could go back in time, would I still have kidneys? Yes. We have to be open minded and that was part of that meal choice. In the future, would I go back to St, John? Absolutely without a doubt. Loved it. Would I have another order of kidneys? Probably not … Been there, done that. There are many other things I need to try.

This day was a lot of fun. I still remember seeing those costumed stormtroopers (yes – as in Star Wars) and going to Harrods spending most of the day eating and drinking with Corey. In retrospect, I just can’t believe what a terrible job I did blogging about anything other than food. I’m sure I have beautiful photos of London – but instead, my readers got to see kidneys.

I also didn’t mention anywhere that I bought a set of those stunning Veuve Champagne flutes. I keep them boxed up in my basement, bringing them out only on very special occasions. They are one of my best souvenirs ever.