Pane ca meusa. I am looking for something in the guidebook and run across that term. This is what I ate last night, it turns out. According to the guidebook it is spleen. One of my cousins clarifies things further and states that it also contains lungs. In either case I reflect back on the day in medical school when one of the instructors described the pancreas as an edible organ. He said the spleen was too fibrous and wouldn’t be good eating. He clearly wasn’t Sicilian. Perhaps some day I’ll make pane ca meusa for the TC [dinner club] crew. Or perhaps not.

Today is a holiday that has something to do with women laborers in Chicago. I don’t understand it, but it sounds like labor day. Food is involved, as is time off from work, so I am already strongly in support.

We spent the day in Bagheria, at the home of the nephew of my cousins Umberto and Lilliana. The house was on a wonderful piece of property nestled in the hills of Sicily. The land was planted with olives, figs, and fave (note that the cousins don’t understand the term fava beans, something can be either fave or beans, but not both). The neighbors are growing artichokes, which appear utterly fascinating, having large thorns at the ends of the leaves/petals. The cousins say these are better than the usual variety and I wonder if they will grow in the Great Lakes region. I may yet become a fan of global warming. 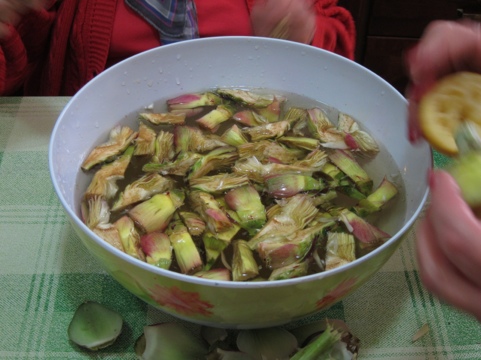 Speaking of artichokes … I was force fed large amounts of food today, as it is literally impossible to say no to a table full of Sicilians. And I’m not exaggerating. As it turns out, some words in Sicilian have meanings that are markedly different from their Italian counterparts. For example, in the North, “no, grazie” means, “no, thank you,” but here it means “more please.” “Poco,” which in high Italian means “a little,” in Sicilian means “a lot.” “Meno” (less) also means “more.” Abbastanza (enough) means “a little more.” In fact, I was utterly unable to find a word that means “less” or “stop.” *sigh*

The menu today was:

Yes, this was all in the course of one meal.

After dinner they took me to see the town, which sits quietly along the north coast of Sicily. I’m not certain how far we went, as it is not within mere human capabilities to estimate distances when Italians are driving. 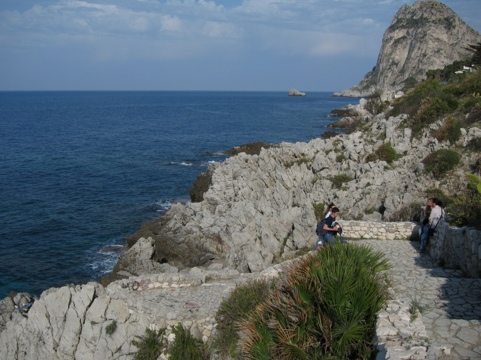 After the visit to town, we returned to the party, where we ate torta di ricotta and pizza baked in a wood-fired oven in the back yard, and I was again informed that I should come to Sicily for more than one day.

I don’t disagree with this last premise, as I would like to see much more of the island, but need to find a way to make it work without extremes of guilt being invoked. Also, my stomach will need to be properly trained for the profound levels of consumption involved.

Finally, when I do make this trip I know that I will need a car – the trains here aren’t the same as they are in the north. Fortunately, after seeing enough of Sicilian drivers my fear is dissipating. I ultimately remain undecided as to whether Sicilians are the best or the worst drivers in the world, but I suspect that they are at once both. They have some incredibly terrifying habits, however, such as turning into and across traffic while not accelerating. The theory seems to be “get in front of the other guy, and he will stop.” Everybody does it, which means it works, as opposing drivers have enough awareness of the road that they don’t make an issue of this or get into accidents.

Tomorrow I go to Torino.

Some things just stick in my brain, like that artichoke salad – it was amazing.

When I got home I tried to grow artichokes, but they take an over-wintering to produce, and I struggled to keep the plants alive over the Michigan winters. I think I got a couple of chokes from all the work I put in, but they were small.

Remember when I mentioned fixing verb tenses in my last update? Well I gave up on this one. There are just too many structural fixes involved in doing that.