Today was quiet, on the Butterblogger spectrum. The first half of this trip was largely dedicated to Rome, in her chaos and noise, her width and breadth and depth. We have returned to Milan, which is a large city, but different. As tourists we are almost a focus in Rome. In Milan we are an accepted fact of life. It is Italy, but more advanced, and it is clearly still a large city, with an expansive Metro system. Curiously enough, the Metro here, with 3 lines, is larger than that of Rome, which has only 2 (although a 3rd is being built). Both are large cities where people live and work, but many fewer people here have lives that focus around visitors such as G and I.

Today we go further afield, to Parma. We are here smack dab in the middle of the Parma Ham Festival. According to the website, the festival runs two weeks, but most events occur in the second week, and it is much easier to do things like visit the ham museum (in Langhirano) that week. Today is the end of the first week, but I remain sanguine because the website states that there are events throughout the town all day long. I’m thinking that perhaps they are just being cursory.

So it was that we got up this morning and boarded the train for a 90 minute ride to Parma. Stepping down from the platform, the sense of place was palpably different. Trees here line the streets leading to town, dappling th place with a golden shade. As we enter one of the central Piazze (Piazza della Pilotta) I see many booths set up. My hopes rise only to be disappointed by a flea market selling goods in which we have no interest. We turn away.

Our pace here is slower, ambling. No clock or schedule pressures us. Will will see and do what we can, so we set our sights on Parma’s Duomo and baptistry. The latter comes first.

It is a glorious creation of pink marble. Inside the paintings are memories of an age in which they were spectacular creations — the height of ability, in this part of the world anyway. We take this all in as best we can, but they (and much of the town) are closing for siesta.

So we found our meanderings wending toward Piazza Garibaldi. There we saw more booths and signs set up, but this time there was also a sign referencing the festival. And under that sign, was treasure … a booth selling plate of ham and bread. We shared such a plate, which was sliced on site by hand using a classic hand-powered slicer. It was an absolutely beautiful machine.

Slices were as thin as air, light as breath, and just incredibly tender. Perhaps my affection can be attributed to the setting, but I feel as though we can’t get prosciutto this good at home. On the plate were also grapes, figs, and parmigiano reggiano. We shared the plate and were sated and happy.

From there we window-shopped our way through the town and rested in the park. Finally, the Duomo was open again, and just as breathtaking as I remember from my last visit here. 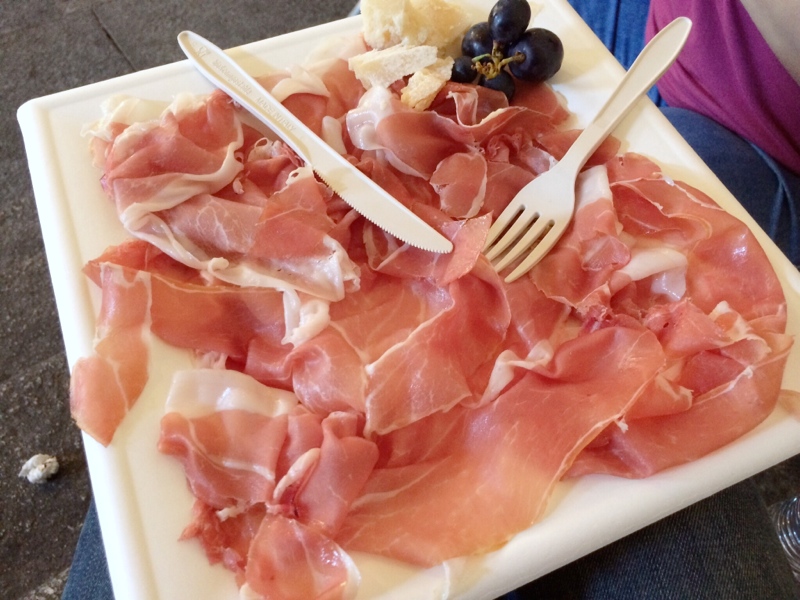 The afternoon shadows were lengthening and the stores were open so we made our purchases, and then stopped once more for more for another plate of the sublime ham before returning to Milan. On the train back to Milano I decided that, in the future, I would target the second week for the ham festival, and I would do my best to have a car as many of the events are not in Parma itself, but are rather in the surrounding towns.

Back in Milan, we went to a grocery store to buy some local standards that aren’t available in the States. We deposited everything at the apartment and went out, finally, for a late meal.

After dinner we returned for one last visit to the place this trip truly began – the Duomo di Milano. We sat quietly, taking in the encompassing vibrant dark of the late Italian night. Finally, exhaustion taking us, we took our leaves and bid her goodbye, walking down the stairs to the subway. I turned for one last look as I descended the steps, and the last of her that I saw was a sliver of stone-white gothic beauty, stretching somewhere along her base. And then the trip was done, but for the packing and departure.