As I write this I’m somewhere in the air between Paris CDG and Minneapolis. Yup – my route home is MAD-CDG-MSP-FNT. I booked it with some trepidation, because the layover in Paris was a paltry 1 hour 25 minutes. In a normal airport that would be more than enough time, but Paris is not a normal airport. It is expansive, with multiple terminals and convoluted courses you have to navigate when transferring. As a result, while CDG is structurally beautiful it isn’t particularly functional. To top it off, I think a lot of luggage moves through there as well, so any remotely short connections end up in bags that don’t make it to their final destinations.

I was up before the sun and on my way. I checked in and navigated to the gate where I boarded with everybody else. We were all in our seats early and ready to go, when the captain announced a 15 minute delay. OK that whittled down the connection a bit, and at this point I predicted my checked bag would not meet me at MSP. I even sent a tweet to Delta predicting this. 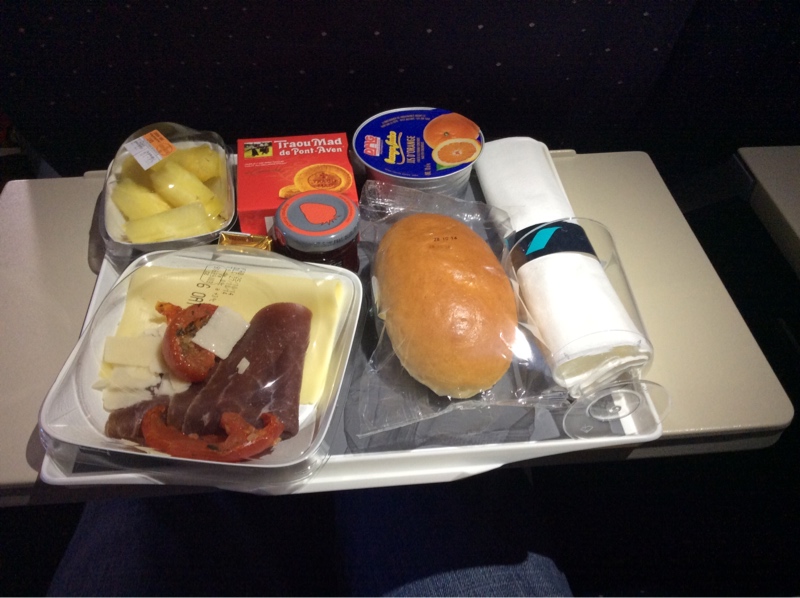 While I ate a breakfast of cheese, speck, and tomatoes we made good time in the air. Incidentally, the tomatoes were salted heavily, and strangely so was the ham. Basically the dish could have been decent but ended up as a salt bomb.

We had made up some time descending into CDG, which was reassuring. We were coming in for the landing fast. Very fast – the pilot was driven. And all of a sudden we were accelerating, rising, and had an aborted landing because the runway was occupied. The come-about took almost 15 minutes. The connection time was down to 60 minutes. One hour is enough for me to make a connection in Paris, but I don’t know that it’s possible for the bag to make it.

I was quick off of the plane and into the terminal. The signage was opaque, and I initially followed the signs for Terminal E, only to be rerouted to a different path to Terminal E, because I needed to get to the “M” gates, rather than the “K” gates. This was only a brief detour. I wended my way through the mousetrap of an airport, eventually passing through passport control and onto a bus for Terminal E (I think they offered both K and M gates!). They were boarding already when I reached gate M25. I boarded the Delta plane for MSP and almost hugged the flight attendant.

I got settled, and we were delayed briefly on departure because they were awaiting some last-minute luggage. As we taxied down the runway I found new hope for my suitcase.