We have been in the air 5 hours and 50 minutes, with 1 hour and 40 minutes to go, and I’m officially tired of flying. This time we are on an ANA 787. Yes I still like this plane, and since it’s night-time the unfortunate windows aren’t an issue.

Not much to say about this flight, but the seats on ANA don’t really recline. Instead, the bottom of the seat slides forward, so if you, as a passenger wish to recline, it is your knees that bear the brunt of that decision rather than the person behind you. And its more of a slouch than a recline. And when you slouch there is a bar running across the seat that pushes uncomfortably across your sacrum. Basically there are multiple impeti to sitting up straight.

During beverage service, rather than pretzels or peanuts they offered us rice cracker snack mix. It was the best rice cracker mix I have ever had. Seriously good stuff. Also I had to decide whether to have the orange, apple, or tomato juice … or the Japanese juice in the green box. I chose the stuff from the green box – it was a wise choice. I think it was a limeade but am not entirely certain of that.

For dinner (yes, more food!) the options were a Japanese meal or an International meal. The simmered yellowtail (the Japanese meal) was recommended by people on Facebook, so of course I chose that. Besides I can get chicken all the time. And P was having the chicken. Also I think ordering chicken on a plane may be a sign of insanity.

I couldn’t identify some of the things on my tray. The fish and tofu were decent. That little round white thing below the carrots? No idea. It was bland and mushy. The sauce didn’t do much for the bland noodles. They brought really good miso soup at some point. The high point for me was the Ogura Pie, however, filled with red bean paste. 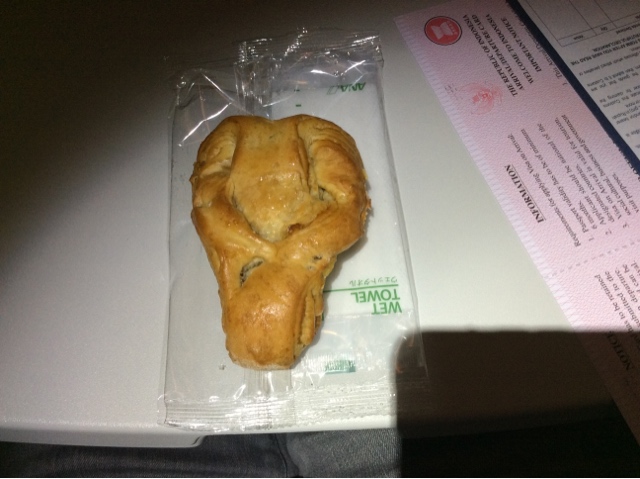 I slept for a while, and they are now raising the lights. The flight attendant brought us all sweet rolls in the shape of a uterus. I’m just not that hungry, which is probably good.

And the big news is that we just crossed the equator and will be landing soon in Jakarta where the real adventure will begin.