The time has come, at last, to turn our faces back to home and the reality that awaits us there. So we rose this morning and straightened up the condo before heading out to breakfast.

After eating our fill, we took aim at Sealodge Beach. We had attempted this hike earlier in the week, but inclement weather at the time had other plans in mind. Today, with the sun was shining bright in the clear skies above and the wind was still, would be much better, so we found ourselves going back to the trailhead, which stands at the top of a cliff overlooking a reef.

When we were here previously, the surf was extreme and the reef couldn’t be seen. Today the waters were crystalline and the reef was obvious.

We were greeted here once more by whales, which seem to be everywhere now that the seas have calmed. We watched for a bit, and then directed our steps downward into the brush, ducking branches and stepping over trickles of streams. Unexpectedly, the hikes during this trip have spoken to my soul. They remind me of a time as a child when I explored the woods behind our home, following the river, climbing over and clambering under fallen trees, all the while muddying my shoes, hands, knees, and pretty much anything else you can think of. I have absolutely loved these treks.

D has humored me for some of these hikes (my stock answer to moments of hesitation has been, “It’ll be fine!”), but has also acknowledged that there are just some things here that one can’t do without leaving the pavement behind.

Our journey took us up again through overgrown forests where chickens watched us suspiciously. And we continued downward past makeshift steps until we were overlooking the sea. It was much calmer today than it had been a few days ago.

The whales were still there.

Now we headed west, along the shore, following a trail that was barely a foot wide in places, the roots of the trees seemingly the only thing supporting our carefully placed feet.

Eventually we reached the beach, where the last few steps off of the massive rocks were particularly precarious. It is a beautiful, isolated beach; there were only three other people here, one of whom was a toddler.

We had another goal, however, and pressed yet further on, over lava rocks across which crabs skittered quickly, toward where locals had reported a “turtle cove.” But we were unable to pass beyond the bay, as the waves were enough to render our path ahead impassable.

And so, sweaty and invigorated (well me, anyway) we turned around and headed back to the car. As we passed, at long last, beyond the edge of the forest, we once again saw the whales that had been shadowing our steps. And we said our last goodbye to the humpbacks of Kauaii.

The rest of the trip wrapped up relatively uneventfully. We stopped for saimin, which is a local noodle dish.

The cafe was an utter classic, pulled out of another era in American dining.

Then we explored some of the byways around Lihue airport, going beyond where the GPS could, or would, lead. As the 4 o’clock hour approached I dropped D off for his flight and headed out with a few minor missions. 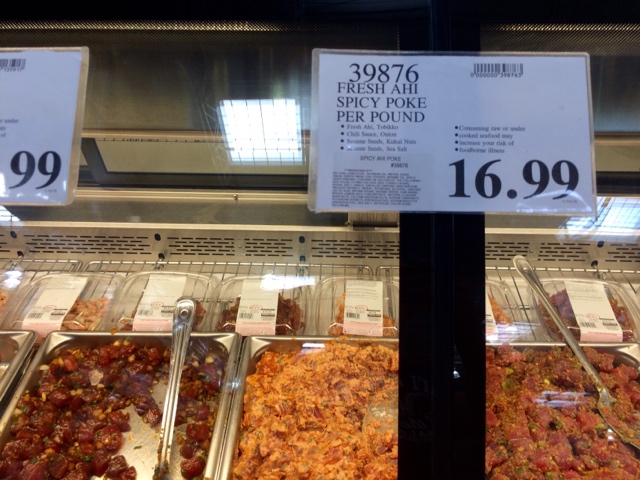 Strangely, one was Costco. I was told that they have very good poke at Costco in Hawaii. They do indeed have poke, although I didn’t try it. Likewise they had a number of other local items that they don’t stock in Michigan (lots of macadamia nuts). More importantly, however, they have cheap gas. Fuel is expensive in Hawaii, so this was a great opportunity to fill up the rental.

Last stop was Kapa’a. To get there I had to fight through Kauai rush hour. Rush hour? Yes , rush hour.  Almost every road on this island has only two lanes, so traffic, such as it is, slows things up quickly. 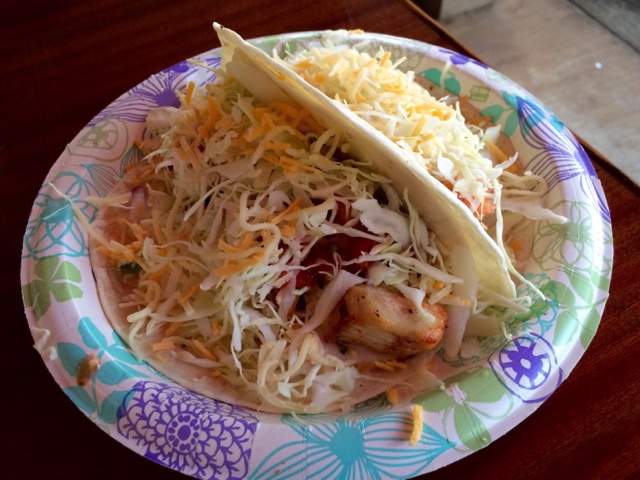 In Kapa’a I went to the Kilauea fish market, which had been recommended by a friend. There I had the grilled ono (fish) tacos. I won’t have fish this good for a while, so even though I wasn’t particularly hungry I grabbed one last meal. And it was well worth it.

With that I returned to LIH and dropped off the rental, which left me time in the airport to muse on the trip (and write this). Kauai is a wonderful place. I have heard that it is the least touristed island, but I think this is a deceptive statistic. Relative to the number of locals, it certainly feels more touristed than the Big Island. I don’t think that this is necessarily a bad thing, however, because I suspect that the tourists attracted to this island belong here, each in his or her own way. Through it all Kauai remains friendly and welcoming, and it quickly became a place where D and I both felt very local.

And now I return to a place where I am definitely a local. The snow has melted (or so I hear) and spring is on the way in Michigan. But worry not, dear friends, as Butterblogger will return in less than one month for a long escape.

Until then, wishing you all the best,