First task in the car this morning was turning the volume of the alarms back up. Silencing them hadn’t stopped the incessant beeping, and shockingly enough, we were responding to some of sounds the car was producing.

Turning the volume down on all of the warnings had apparently been a bad decision.

Then we started the day’s travels, headed well south of Modena, to where our first stop awaited us in the misty hills above the town of Sassuolo. On the way there, I turned off the radio, as we weren’t using the integrated GPS, anyway.

And the beep stopped. I was afraid to admit it had happened, but after 20 minutes I asked D when he had last noticed the beep, and he conceded that it had gone away.

Delving back into the menus of the nav system, we finally found what we were looking for: a setting for “speed cameras.” It seems that the beeping is a part of a system designed to inform us of speed traps, of which there are a lot around here.

Now we felt better about the beep, and after days of frustration decided not to turn it off. 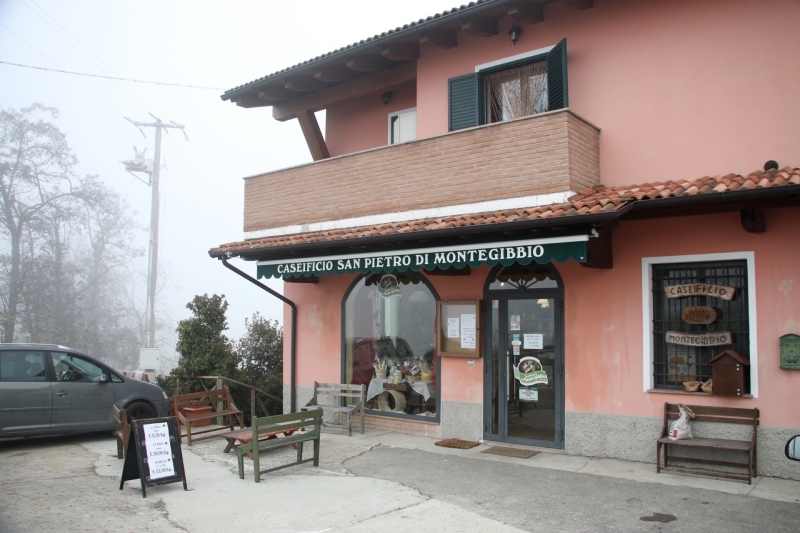 Up we drove, turning sharply and switching back, high above the valley floor to where the air turned grey. There, in a remote building we found the caseificio, the dairy we were seeking. Once again, to see Parmigiano Reggiano being made. Again, I’ve seen this before, but D hasn’t, and the repetition creates no regrets for me.

Today we arrived (as directed) at 10 am, which was well after the day’s cheese making had begun.

As always, I am impressed watching the cheesemakers raising the rounds from the bottom of the vats and dividing them.

Down the steps behind the caseificio, we find the building where they age the cheeses for their first year. After the first year, they are officially parmigiano reggiano, and go elswehere to age further. Late in the aging process, they return to the caseificio to complete their aging. 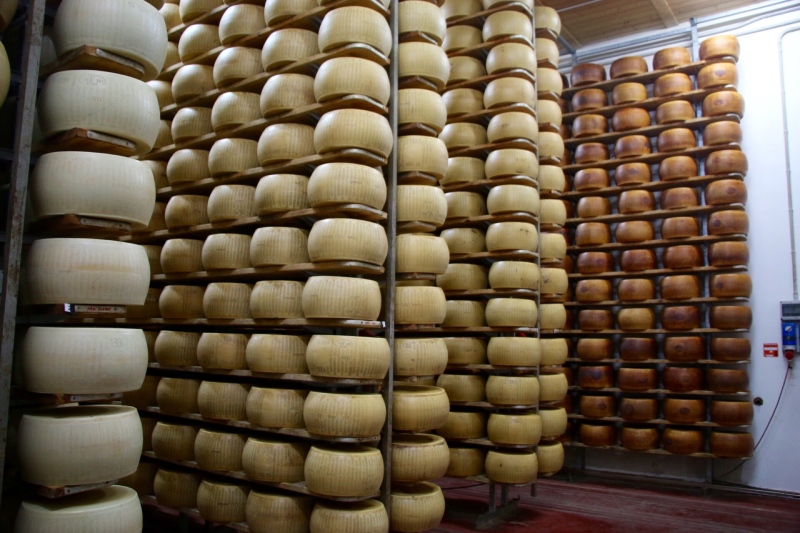 My first steps into the aging room are again marked by a deep breath, as I do my best to absorb, in its entirety, the aroma of the aging wheels. The massive wheels of cheese sit, uniformly spaced, on their shelves. Every day a machine comes by to clean them and dust the shelf on which they sit. 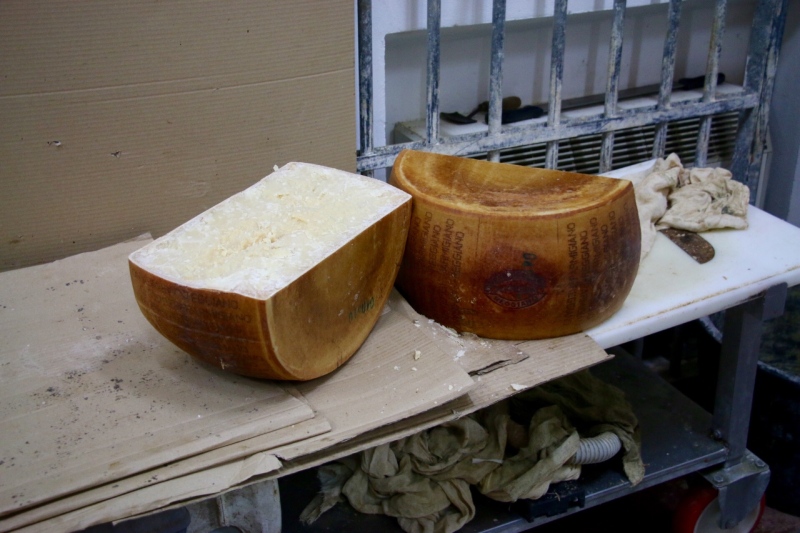 Here they have wheels that are up to 6 years old, by which time the rinds have darkened substantially. In this picture, I don’t know how old the cheese is, but it was recently cut for a buyer to sample. Of course they let us sample it as well 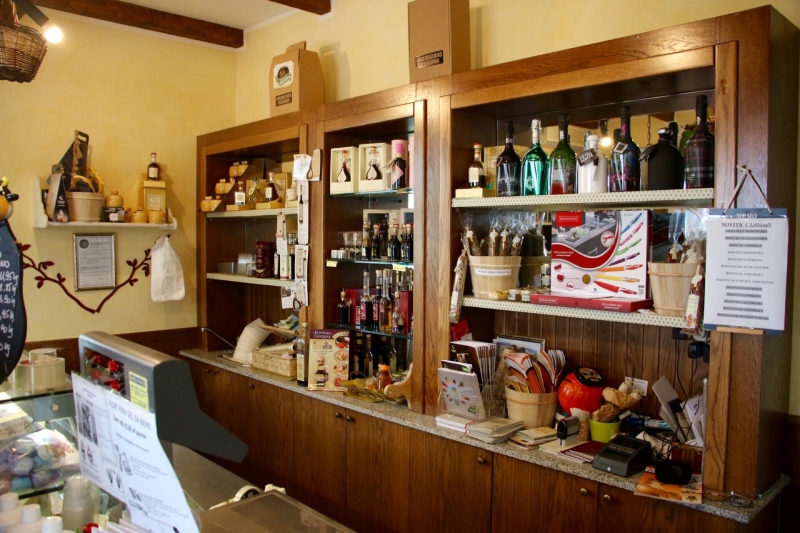 Afterward, we returned to the store above, where we bought some 55 month cheese, as well as the day’s freshly-made ricotta. There is nothing quite like ricotta that has been made just a few hours before. It sits like clouds in your spoon and on your tongue, and it eats like ice cream. Unless you’ve tried it fresh, you’ve never really had ricotta.

We discussed with our guide that even the Parmigiano Reggiano we buy at home isn’t the same as we get here. She explains that American buyers (ie for WalMart, Costco, etc) tend to guide their purchases by price and name, not flavor. Cheesemakers know when their cheeses have flaws and can age no further, and basically dump them on the market. These are the ones that we get in America.

I bought 3 kg of cheese to bring home. As I think about it, that’s really just 7 lbs. Perhaps I should have bought more.

Wrapping up our purchases we headed back down toward the town and on to Maranello. This is the home of Ferrari, and our goal here is one of the Ferrari museums. First we have to sort out the parking. Seriously – it’s always a guess here as to whether or not we are able to park, and just as importantly, we haven’t always been able to figure out how to pay for it.

As we sorted out these issues we were approached by a young Russian, Andreas, propositioning us with a Ferrari. He was working for a business in town that offers emotionally vulnerable tourists the opportunity to drive a Ferrari California through the hills around Modena for a half hour or so.

I was torn about this, but D was sold, so we climbed into the back of the bus with Andreas and the driver in order to head over to the garage. As we took our positions in the back seat, I reflected on the day P and I followed the sketchy guy into the back alleys of Yogyakarta, and that worked out OK. This was at least marginally safer. Probably.

In reality it turned out to be fine. We weren’t robbed, and we actually did get to drive a very expensive sports car. I was a bit anxious about driving the Ferrari, but it was honestly a lot of fun – much moreso than I expected, in fact. We headed down the streets of the city, onto the highway, and out onto country roads. The Emilian countryside slid by around us, marked by grape vines dappled in shades of amber and trees of green and gold. Cars passed the opposite direction as roaring blurs against the bucolic background.

I’ve got to say, although the roads around here can busy, when one has that much acceleration, merging into traffic is downright simple.

The problem is, now I kinda want one. I won’t actually get one, of course. I’m crazy, but I’m not that crazy.

Anyway, after our drives, we finally made it to the Ferrari Museum in Maranello.

Many people had said that this museum was great, but neither of us was overwhelmed. There was a big emphasis on F1 racing, and I’m just not much of a race fan. 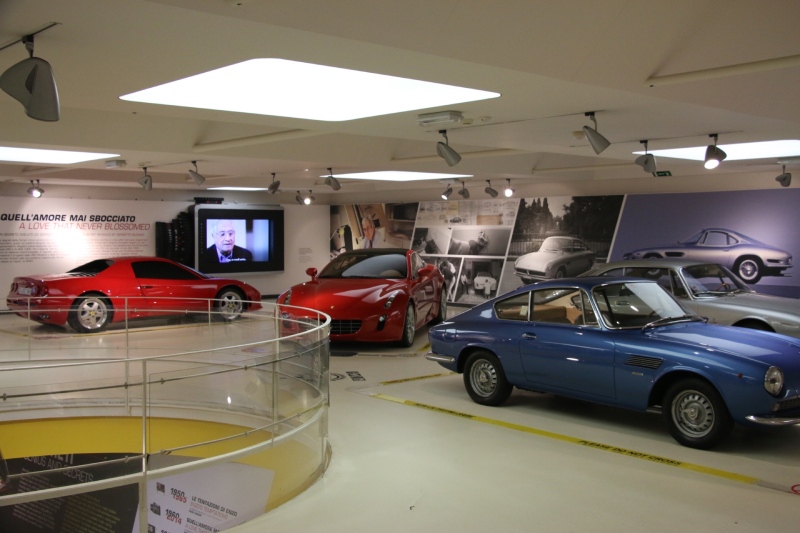 Still, a few gems stood out.

From there, we had a late lunch and then headed to Modena, where we visited the Museum Enzo Ferrari. Most people said the other museum is better, but D and I disagree.

This museum was much better curated and more interesting. It is an act of love, and rather than featuring race cars, it features classic Ferrari automobiles.

By the time we were done at the museum, the world had grown dark, so we climbed back into our beeping Fiat and pointed our car back toward Bologna. We found our way to the city gate and navigated back to the hotel, exhausted after a long day of cheese and cars. We cleaned up and then stepped out into the shadows of the cool Bolognese night, following her ancient streets in search of food.

One thought on “Some Things Are Just Better in Italy”