It is election day back home. When we planned this trip, we noticed that it would fall during the election, and shrugged at it. In retrospect this was a brilliant decision, as things have been ugly, and now I think I’ll do it every four years.

There is a lot to see in Kyoto, but somewhere along the way we heard about Osaka, a mere 15 minutes away on the shinkansen (bullet train), so we went to the concierge and asked for suggestions. They seemed baffled, both about our desire to visit, and regarding what we should do. This should have been a sign.

We missed the signs, of course, got up, grabbed a quick breakfast at the train station (seriously – it was a breakfast hot dog!), and hopped on the train. The trip itself required two easy transfers to get to our first destination. We’re getting good at navigating the system here, it seems, and it is becoming a matter of pride for P (he’s better at it than I am). 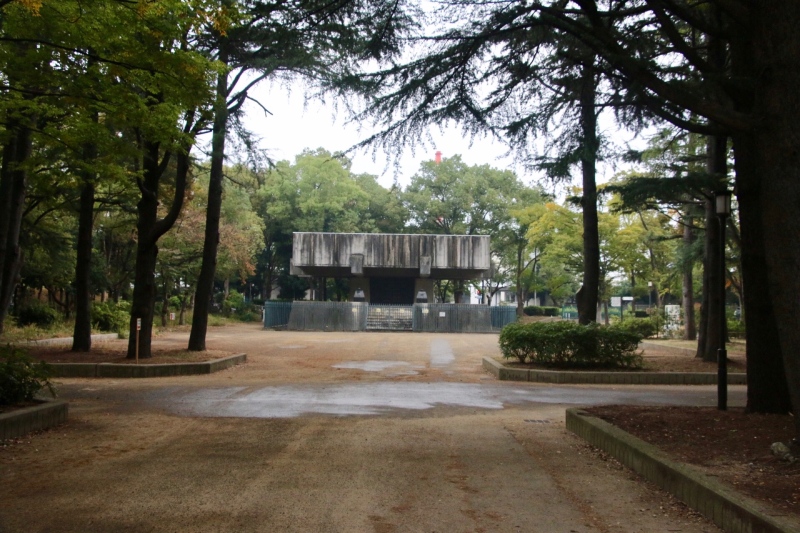 Our first destination is the 2nd rated sight in Osaka – the Osaka Castle. The train dropped us off nearby, and we had to guide ourselves the rest of the way. 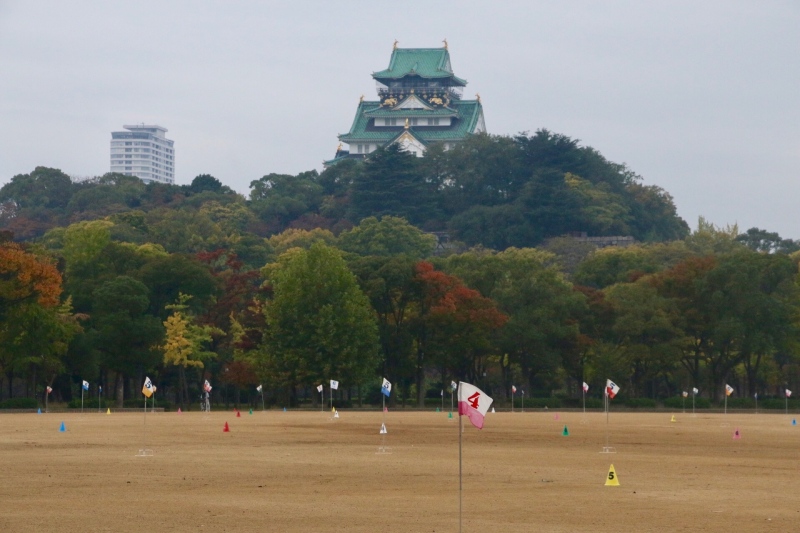 They were doing something with senior citizens in this field. I’m not certain, but it seemed to involve clubs. 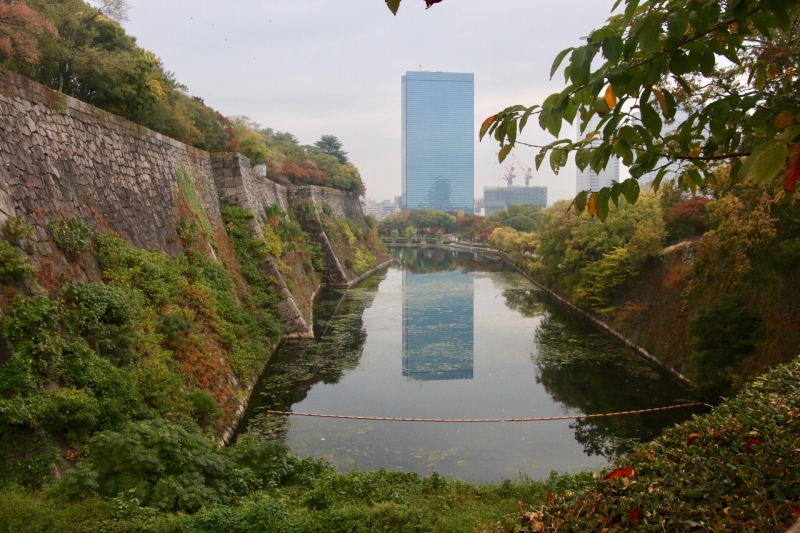 Of course we got turned around and walked much further than necessary, but finally crossed over the moat into the castle grounds. 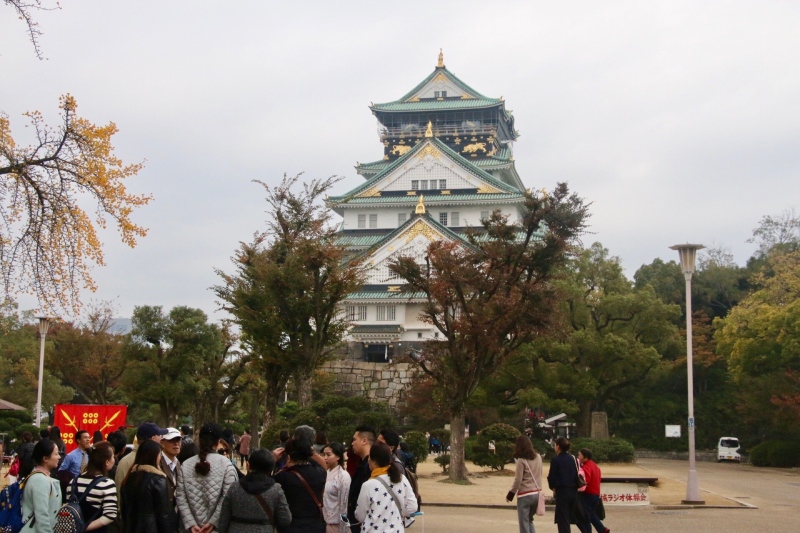 And this is the castle itself. It dates from the 16th century, and according to the displays inside there were some spectacular battles on the grounds. 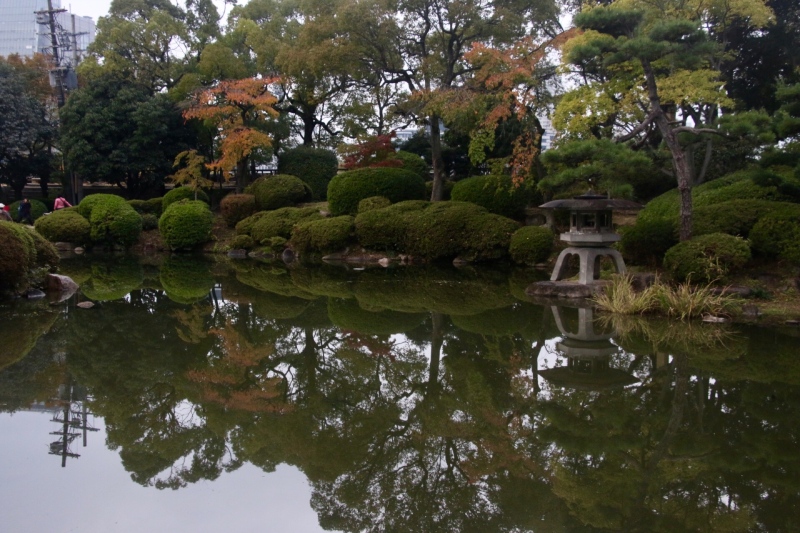 Inside was a bit of a disappointment, so here’s a picture of the grounds instead. The interior of the castle has been modernized, and frankly when I visit a castle, I prefer to see it in it’s traditional splendor. Still it was nice to be able to take the elevator up 5 floors. 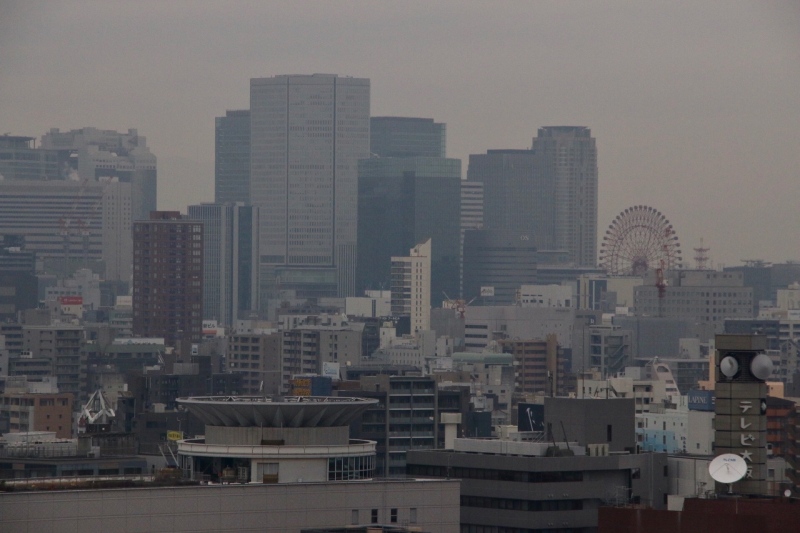 And the views of the city were decent (this may be my climb for the trip!) 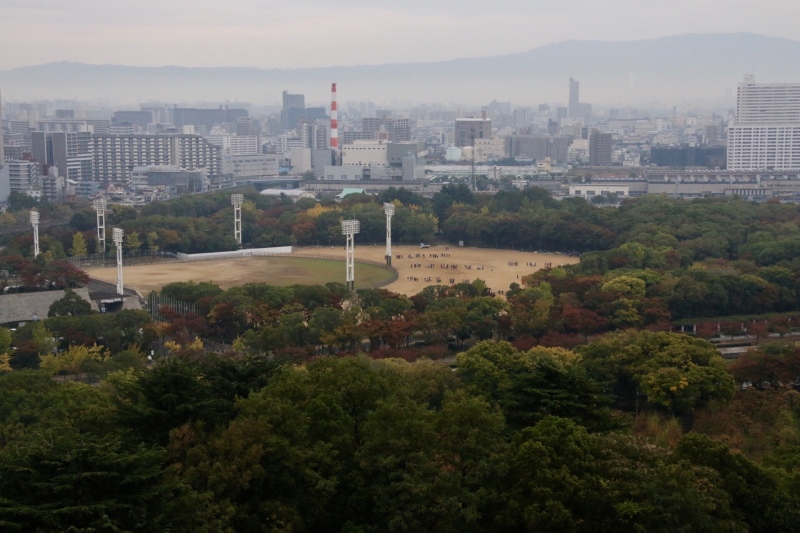 Look! The senior citizens with clubs are lined up. I still have no idea what they are doing.

All in all, the Osaka Castle was a bit of a bust. I should have taken pictures of the armor, but they didn’t want us taking photos on those floors. Sorry about that. Frankly the entire thing spoke to a history to which I can’t really relate, the interior was modern, and little information was provided in English, so none of that helped. I can blame my Euro-centric education, or I can blame the display for not engaging me, but in the end the castle gets a thumbs down.

Light rain was falling from dim grey skies in Osaka as we headed toward the subway. Given that we were in the business district I was surprised by how few people were waiting on the platform. The cleanliness, however, was not a surprise. You could eat off of the sleepers – it was that spotless. 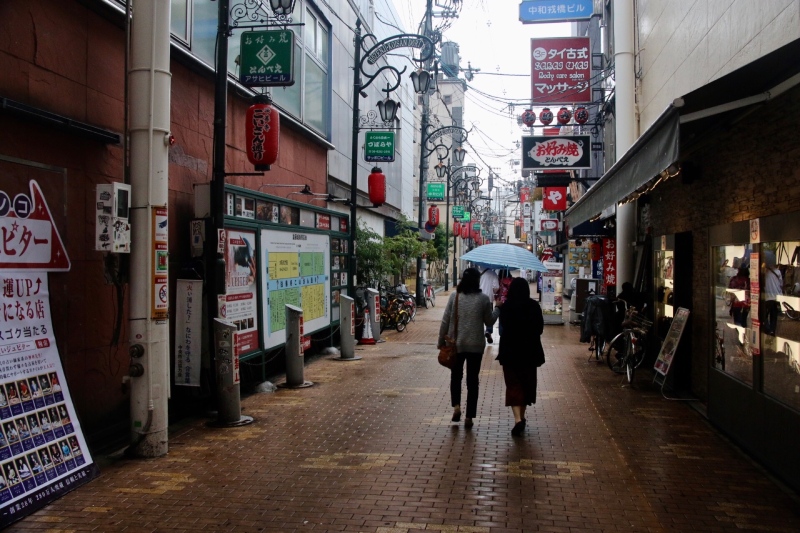 When finally we emerged at street level we were close to our target of Dotonbori street, known for its shopping. This, by the way, is the number one thing to do in Osaka. So we ate a lunch of noodles. We really weren’t paying close attention and accidentally chose a Chinese restaurant, but frankly there are worse mistakes to make. My noodles were fantastic.

The shopping district was covered, and we gave it a cursory visit, but neither of us are shoppers. 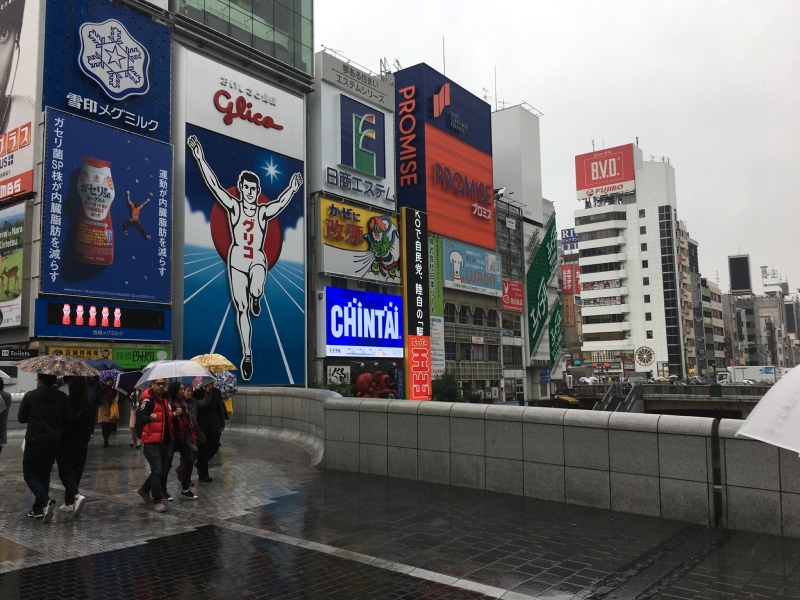 Here is the classic image related to Dotonbori street. Usually, it’s a photo taken at night when the neon is aglow. We snapped our requisite photos and headed back to Kyoto. The one regret I leave on the Osaka table is some of the street food for which they are known. The timing of our schedule and seeing the vendors didn’t coincide. Perhaps another time I will have takoyaki. 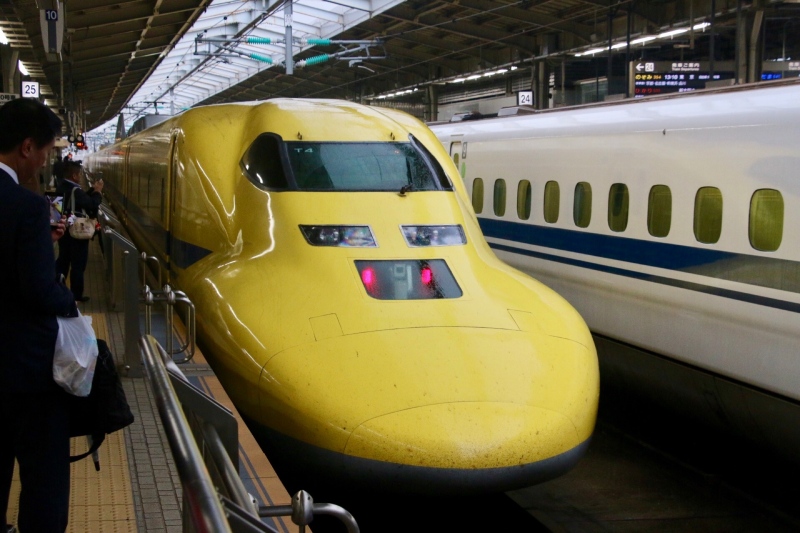 On the way back to Kyoto we saw this yellow Shinkansen. People were taking pictures with it, which got us wondering. After some research, I discovered that it is a test vehicle for the bullet train. It’s kinda neat that they look at the train as having star-power.

Back in Kyoto we deposited a few things in our room and were back out into the afternoon. P had found the rail museum, so off we went. Two stops down the bus line and we were at our destination. 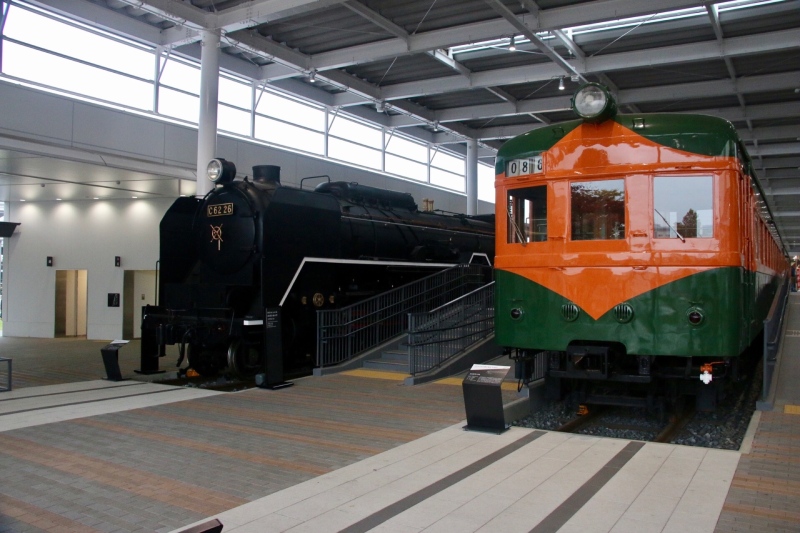 I’ve always loved trains. There is something massively solid and powerful about them and these are no different. 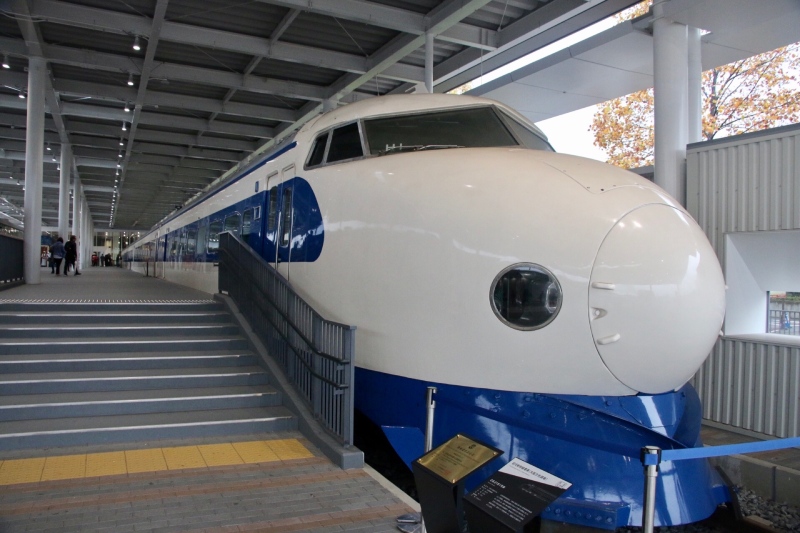 This is the original Shinkansen. It could go up to 137 mph. Current trains go up to 200 mph, although test trains have gone much faster than that. 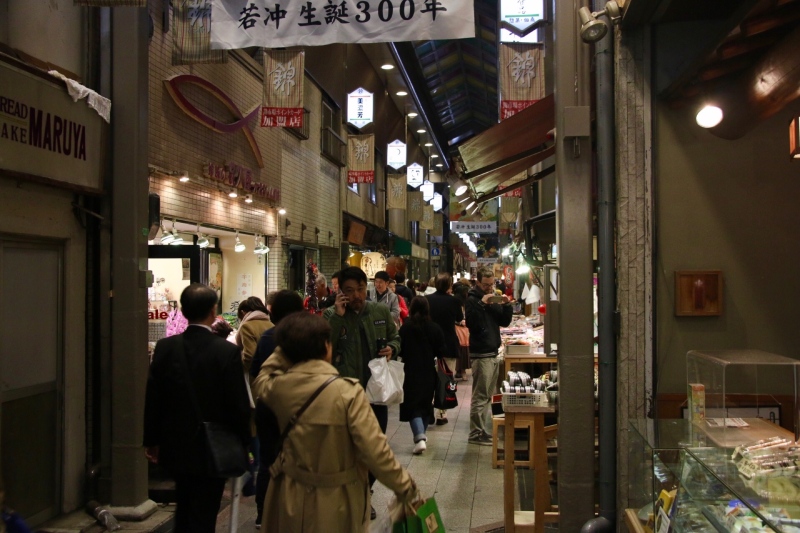 After the rail museum I went to the Nishiki market. This type of market, focusing on local foods, is more my speed. 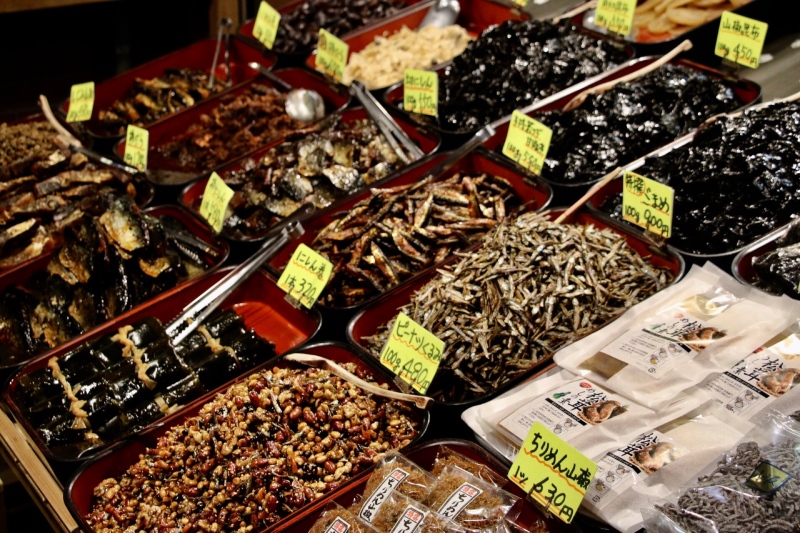 I have no idea what some of these are. 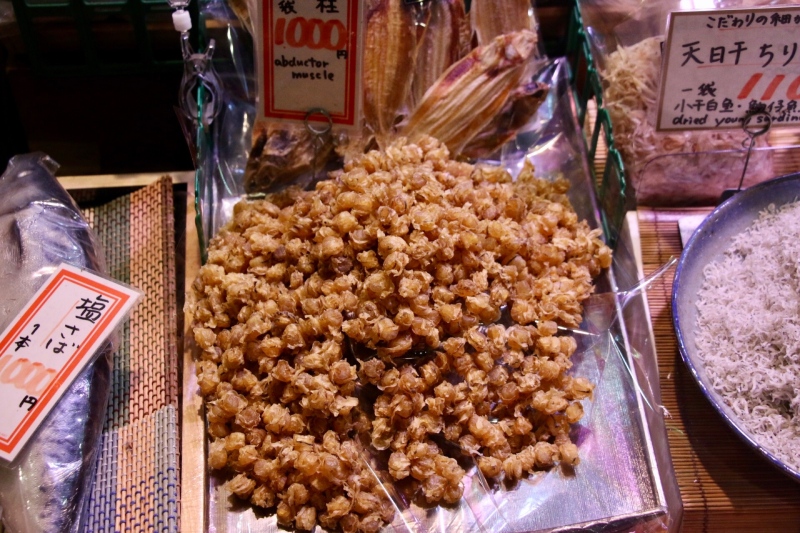 These are abductor muscles (it says so on the sign). I have no idea what to do with them. 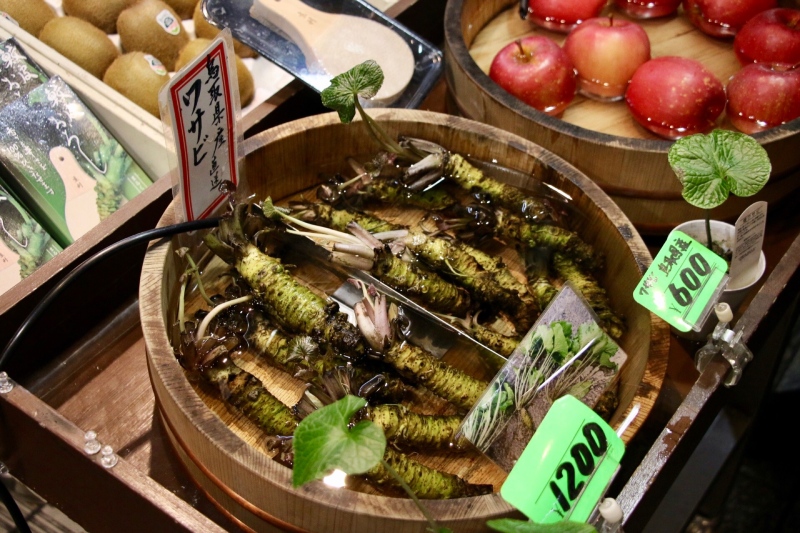 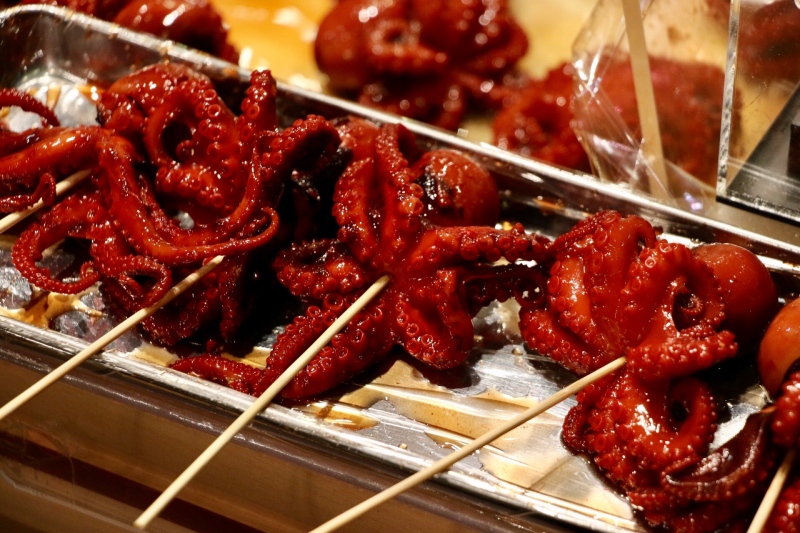 These are octopus pops! 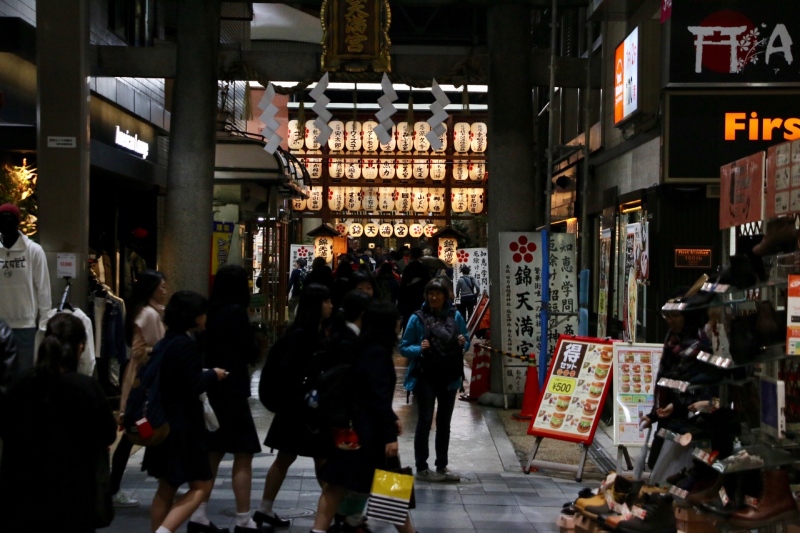 Here, at the end of the market is a Shinto shrine.

By the time I reached the end, the market was closing and dinner time was nigh. I returned to the hotel to find P (who hadn’t been feeling great so begged off the market) and we found food and then rest for our very tired feet.