This morning, I rose, had breakfast, and packed before heading out into the streets of Tokyo where I found myself strolling, contemplative, under low grey skies in one of the world’s greatest cities.

I walked through the very expensive shopping district, following a vague trajectory, but mostly headed where my feet would wander.

Somewhere along the way, I stopped to consider the beauty of this manhole cover. Beauty in this, the least of things, is remarkable, and I have seen it in many countries. Why does it matter to make this very functional piece of steel an attractive item? I don’t know, but in so many places in this world, the locals have found this as a small place to express their pride of identity.

And as I passed along the still, dark waters of a moat, I blocked out the din of automobiles, instead focusing on the rustle of the falling golden leaves of autumn. 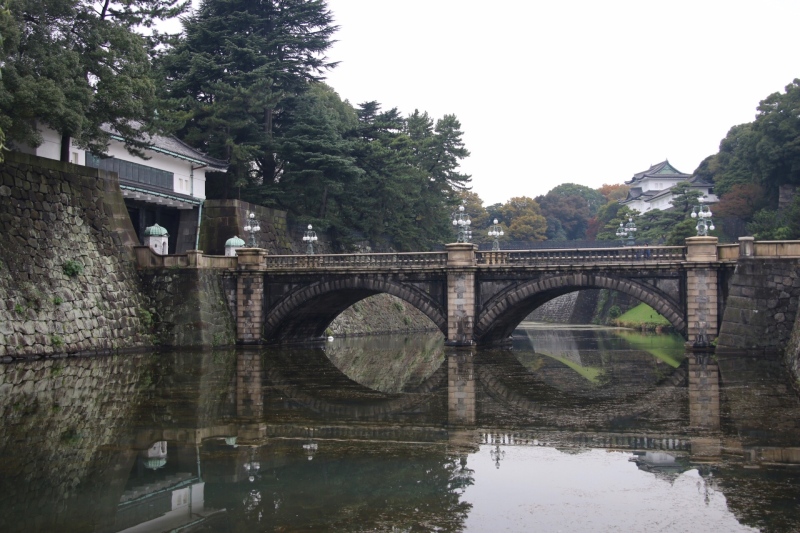 Turning, along another road, I entered the park leading up to the imperial palace, where I stood with many others snapping photos on the emperor’s doorstep.

Reversing course, I passed again a collection of sculpted trees, and my meanders brought me to a park bench where I paused to think. Much has happened in the last week. The election weighs heavily on my mind, and that is all I will say of it here.

My somber reverie was eventually interrupted by 4 middle aged women who strangely wanted to take a photo with me. I didn’t even notice it when it started. I was sitting alone, adrift in thought, when one of them sat on the bench near me, and the giggles of her compatriots nudged at the edges of my awareness. She was sitting far enough away that I hadn’t even noticed her quietly take the seat, but she was inching closer.

This reminded me of the times at Borobudur and Prambanan when Indonesians asked for pictures with P. There are plenty of caucasians in Tokyo, however, which leads me to believe that these women were not locals.

I took pictures with all of them, and in short order, and with effusive thanks, the ladies moved on, and so did I. Near the train station, I paused for one last lunch of teppanyaki.

And that finally draws this trip to Japan to a close.

I collected my luggage at the hotel and headed to the subway. This trip began at Haneda, near downtown Tokyo, but my flight home leaves from Narita, which is quite far away. P took a charter bus yesterday, but he was departing during rush hour. In the early afternoon, the concierge suggested that the subway would be most efficient for me, and least expensive. She was correct – the ride out to the airport was easy and quicker than I expected.

I arrived far too early, so sat on the deck watching the planes taxi. This grande Delta dame grabbed my attention, so I looked up the tail number, and found that she had just arrived from Detroit, tying me to home.

After half an hour on the deck, I checked in with Singapore Airlines and rested for hours more in the lounge. When I was finally allowed to board SQ 12, from Narita to Los Angeles, I was greeted by Ning who helped me get settled in seat 1D. She asked whether I wanted Dom Perignon or Krug. I indicated that I would have whatever was open, and she demurred, stating that they would open whatever I wanted.

And that was just the beginning of a flight that was ridiculous in all the wonderful ways it could be. I had used points on this seat, and it was perfect. I slept like a baby.
We arrived early in Los Angeles, which allowed me to connect on an earlier flight to Chicago, which was great because otherwise I would have missed my last connection back to Flint.
In Flint, I quickly exited the airport, and just after midnight pulled out of the parking lot, heading south to Ann Arbor. Somewhere along the way, I encountered two deer in the roadway. I swerved, but was unsuccessful in avoiding them. The car was handling fine, and I considered continuing, but logic won out. As much as I wanted to get home, I needed a police report. So I pulled over, collected my report, and at about 145 in the morning crawled under the blankets in my cozy little home and slept.