We talked about reckless climbs yesterday. If you haven’t figured it out, there are a couple other things that almost always grab my attention while traveling. One of those things is ancient ruins. If they’re available, I will try to find the Roman or Greek ruins, or frankly ruins of pretty much any lost civilization, and pay a visit.

I’m in Hungary, and the Roman Empire stopped on the West side of the Danube – in Buda. Or, technically I guess, the empire stopped in Obuda, which is a part of town a little bit to the north of Buda. Aquincum was Rome’s most distant outpost in this part of the world, and that was my destination today. Some guidebooks give it a “must-see” status, whereas others aren’t as interested. It probably depends on the individual traveler, but for me it outranks some of the other possible sights.

To get there, I crossed the river and walked to the train station. I walk a ton when I travel, but this expedition would not be walking distance. As I went, I passed the parliament building, standing majestically on the river bank in Pest, getting my best view of the building to date. According to most guidebooks, that building is a “must.” Perhaps if I come back to Budapest some time I’ll go.

I boarded the train and we took off, lumbering forward slowly but insistently, under gloomy grey skies. It wasn’t a long ride at all, perhaps 5-10 minutes, passing through neighborhoods of communist-era tract-house apartments done up in shades of drab gray. To my right, outside of the window I could see a clearing and fragments of bright with marble. We had arrived at the Aquincum stop and I disembarked.

There were no signs indicating where to go anywhere near the train station, so I went toward the clearing we had passed, striking up a conversation with a couple from Oregon as we went. They seemed to know where we were going, so I followed them to the gate. The price of admission included an optional fee to take photographs inside. They don’t charge for outdoor photographs, and I think that’s just a matter of enforceability. 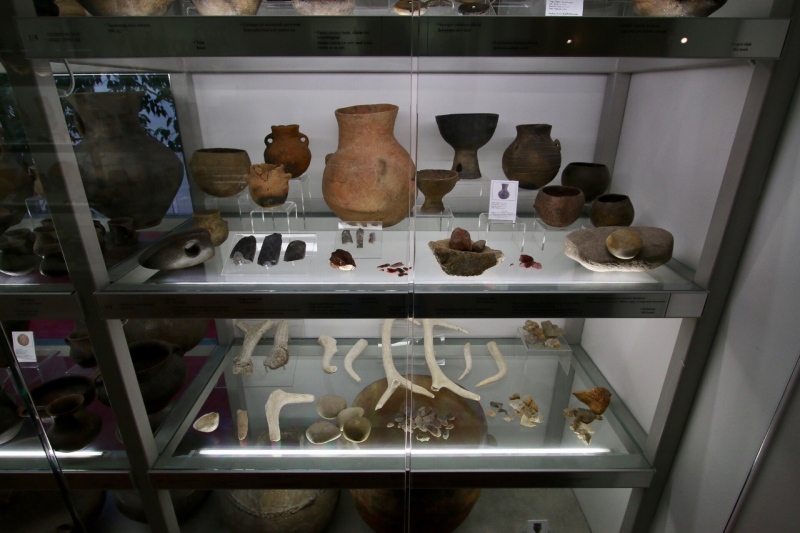 To the left upon entering the grounds is a small exhibition building. Here, on the main floor, they have numerous shelves of nicknacks, including these shelves of pieces dating to the paleolithic and copper ages.

The exhibitions on the lower level are for children, so I went upstairs. 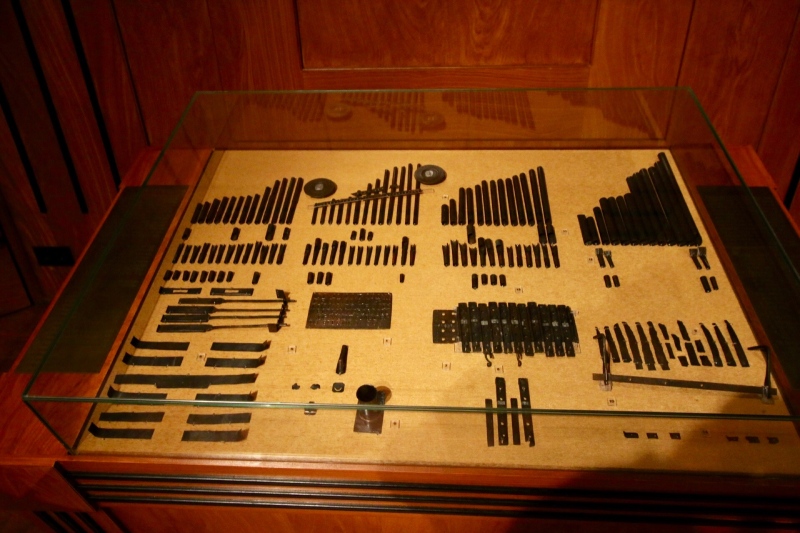 This is the pride and joy of the archaeologists here –  the Aquincum water organ. It’s a small pipe organ (probably truly air powered) that was found here. It was, of course, in pieces, but they have managed to cobble it together in a fair estimate of how it appeared. 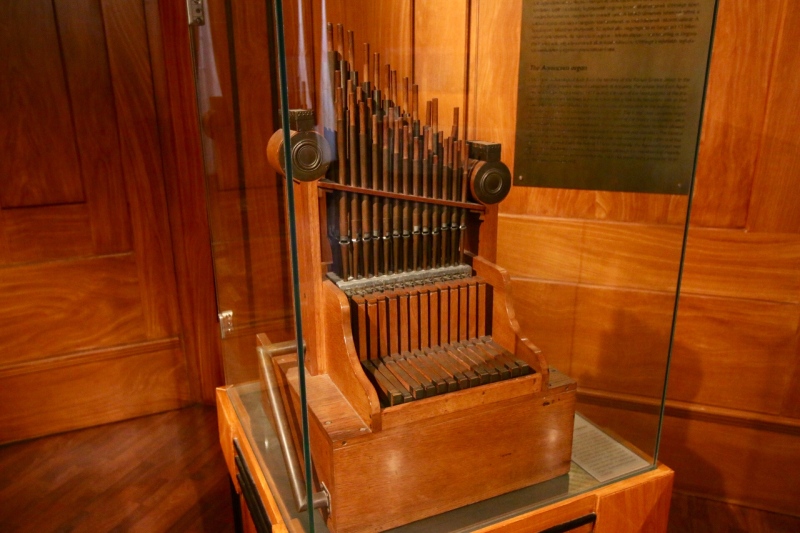 I heard that there is a functioning replica, and this may be it, but there was no obvious way to make it play.

Continuing through the exhibit hall, they have this reconstructed water fountain with a dolphin gargoyle. I love it and want one, although I have no place to put it. On another level, I am left wondering what they mean by the term “reconstructed.”

These floors are spectacular, but I have no way of judging whether they are original and have been moved, or if they are reproductions. This troubles me.

With rain threatening, I move my tour outside to the main grounds. First I stop at a reproduction of a painter’s house. This is the kitchen. If you know me, you shouldn’t be surprised that I took a photo of the kitchen. I’m honestly not a big fan of the reproductions of things like this as I always feel like they are assuming a lot. Also – as I look at this photo well after the fact, I can’t help but wonder, “Is that a bat?!?!”

Continuing on, this was one of the baths. I’m OK with the way they have reconstructed this. It is immersive, but I can see what is original and what is new.

Moving along I am struck by how little truly remains of Aquincum. For example, the civic theater is entirely new construction. I have seen many better-preserved theaters elsewhere. There are apparently two other amphitheaters somewhere in the vicinity, but I couldn’t find them.

This is a craftsman’s house. I am fairly certain that I have photographed this from the threshold of the front door. See that thing on the ground to the left, just inside the door? That’s the toilet. Here I am, standing in 2,000 year old ruins, and I can’t help but wonder, “What kind of people would put a toilet there?”

Seriously – what’s the etiquette of a toilet right next to the front door? “Welcome to my house. I have indoor-outdoor plumbing. Please don’t mind the stench. It gets better the further in we go. Would you like to use the latrine while we chat?” I’m sure a toilet was considered a luxury, but this was just too much.

Moving along, this is another ancient bath. The Romans loved their baths, and frankly they did amazing work with them. See how the floor is elevated? That’s because it was a heated floor. I do wonder how they kept from getting too many extremely hot and cold spots on the floor, and I suspect they must’ve had rugs, but then again nobody talks about Roman rugs so perhaps I’m wrong. 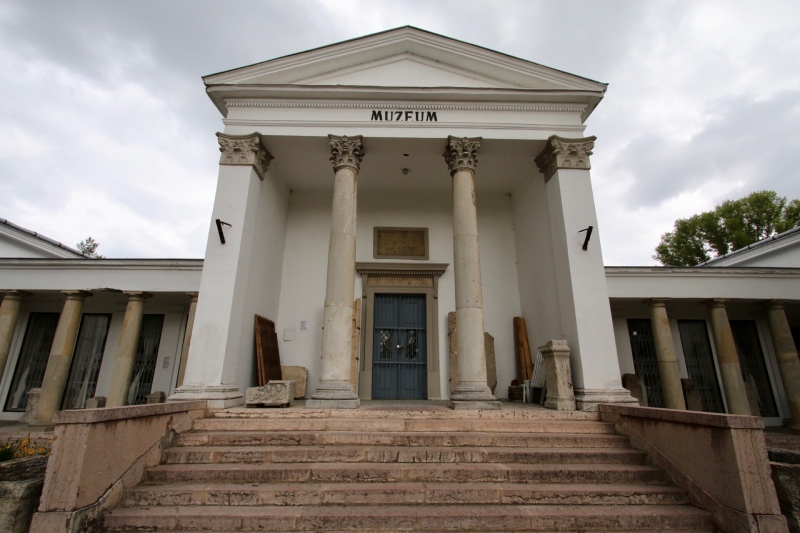 In the center of the ruins there’s a large building labeled Museum. This was the original museum that was built for the Aquincum ruins, but if you notice the little bright spot in the middle of the doorway, it’s locked. This has become an ongoing theme with me.

We are left with access to just the outside of the building, where they have row upon row of lapidary. 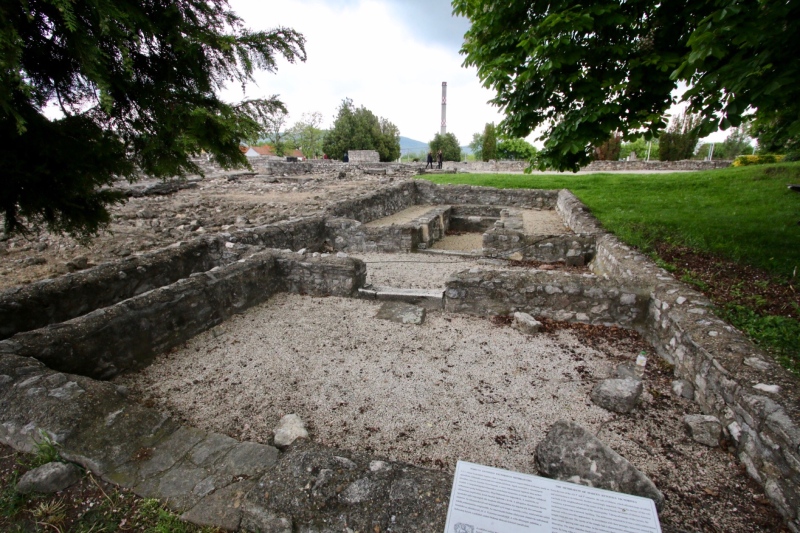 Continuing my tour of Aquincum, I come across a Mithraeum. I seem to find these everywhere, and feel like I don’t know nearly enough about the cult of Mithras.

By this time, the lunch hour was near. I had passed quickly through the grounds here, and on my way out bid goodbye to the couple from Oregon, who were just leaving the exhibition building. They probably wondered how I went through things so quickly, whereas I was left wondering, “what could they have looked at so long in there?” 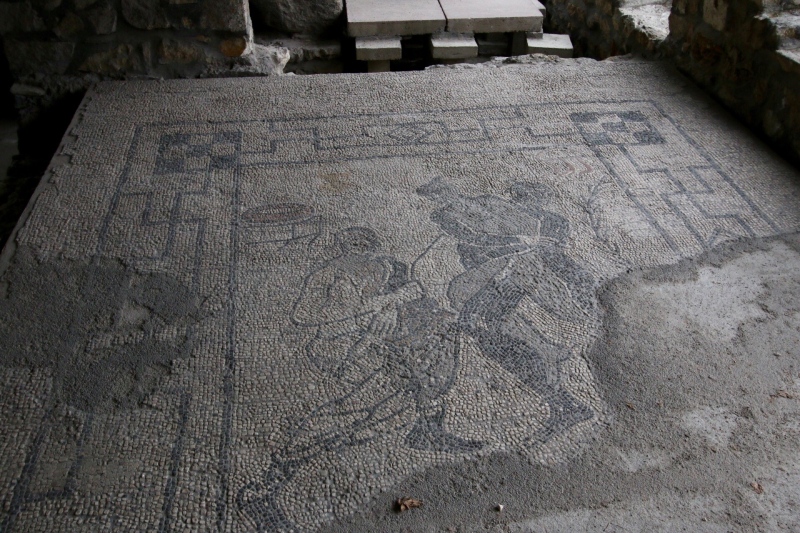 I’m glad I came out to Aquincum, although I’ve seen better ruins elsewhere. For example, I didn’t see many of the tile floors that I’ve come to expect, and I don’t know why. Either they weren’t preserved as well in this part of the world, or they’re just covered over. But the occupants of Aquincum  clearly used tile, as this was on display in one of the baths.

Leaving the grounds, the guidebooks indicated little else of interest for me in this part of town, so I boarded the train back to Budapest, where lunch and the market awaited.