I feel as though I’m starting the days a little later when I travel now, and I’m not trying to cram quite as much into a day, although that may reflect the fact that Bratislava is a smaller city, with fewer things for a tourist to do. As I consider this, I’m finding that it’s OK with me, as it gives me a chance to slow down and relax a bit more on vacation.

After breakfast, I gathered up my things and headed out, headed first toward Michael’s Gate (told you I can’t avoid it) and into the picturesque streets of the old town.

There are sights like this down many of the old alleyways here, with new views and perspectives on familiar structures. This is one of the things I love about old towns like this.

Eventually I worked my way to the bus station at the base of the UFO bridge (that’s not really the name of the bridge, but it’s my name for the bridge). Time for an admission: Butterblogger doesn’t really like the bus. He avoids it whenever possible, much preferring subways, trams, trains, and streetcars. These things all have tracks, which give them a sense of permanence.

Buses, on the other hand feel less predictable, more unstable. A bus driver could go rogue at any moment and turn right when the professed route would indicate left, and an unfamiliar rider would be left without any way of recognizing this. And because their schedule flows at the whims of traffic, buses are less reliable in their timing. Frankly, a bus is a travel disaster waiting to happen, and if feasible, Butterblogger will walk first.

Today, my free guide suggested starting at the Devin Castle. It didn’t give much description, but said I should take bus 28 or 29. I did my own research on this, and both buses take you to the city of Devin, but only bus 29 goes to Devin Castle. Which just proves my point – buses are terrible.

Still, here I was, under the roadway, standing at the bus station and waiting for my bus to leave. It was scheduled for 11:10, and pulled up exactly on time. I and a throng of other tourists crowded aboard and we were on our way. 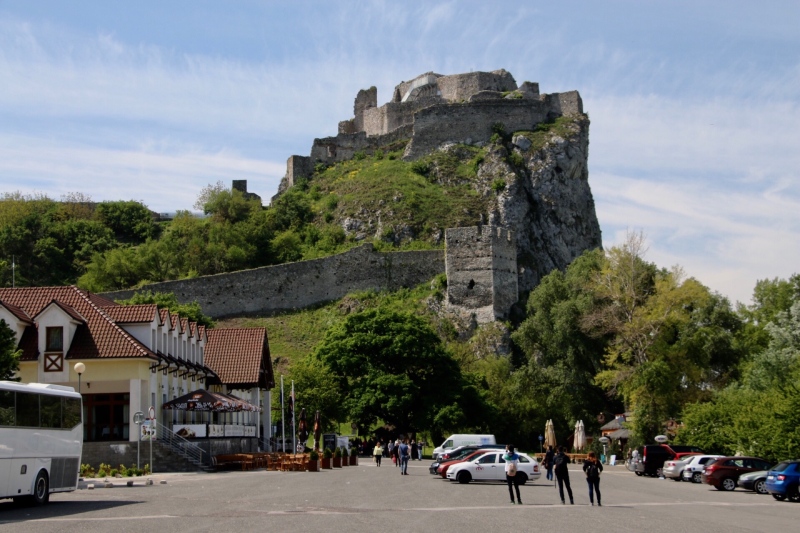 Twenty minutes later, after about 6 or 7 stops, we stepped off into a large parking area ringed by restaurants. Towering above, high in the dappled blue sky, were the remnants of a medieval castle.

If you were looking at me at that point, you would have seen a massive grin break across my face. This was perfect!

The signage outside the Devin Castle was lacking in its most crucial points. There were signs pointing every direction, but none that read “Hrad Devin.” Perhaps they didn’t think the signs were necessary given the massive castle standing on the cliff high in the sky. But tourists were going two directions, with some heading directly toward the castle, and others along the base of the mountain.

Given such a decision, I am wont to take the less intuitive choice, because that often seems to work out in scenarios like this. In this instance, I thought the more accessible approach to the castle might initially take us away from it, but couldn’t get past the nagging feeling that the souvenir vendors, situated higher on the hill, might know something I didn’t.

Just past the last of the vendors, the walkway veered left, and I found the gate into the castle grounds. As I approached I noted a group of tourists coming up a secondary muddy footpath. They had chosen the lower route, and I felt pointlessly vindicated. 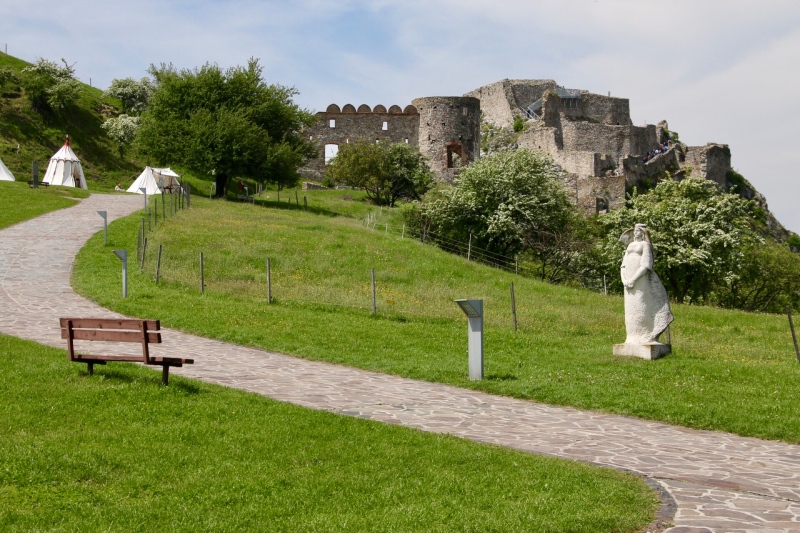 I had an absolutely wonderful time exploring the grounds of Devin Castle. The path took me in, winding around and upward in a gradual slope, views of the structure gradually revealing themselves ahead of me.

Within the courtyard, the old well has been redone. It is 55 meters from top to bottom, and during the reconstruction many relics were pulled out of its depths. 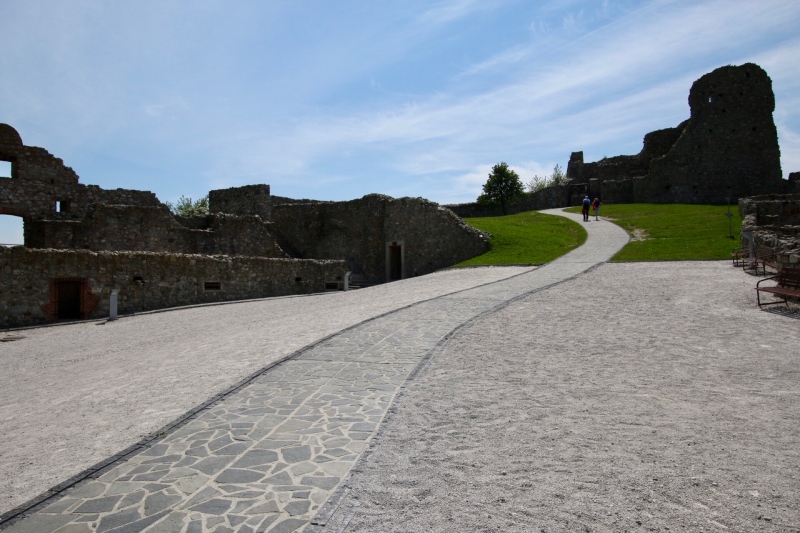 Paths point all directions from the courtyard. We weren’t provided with a map, and signage was once again limited, so I can’t really tell you what these structures were. 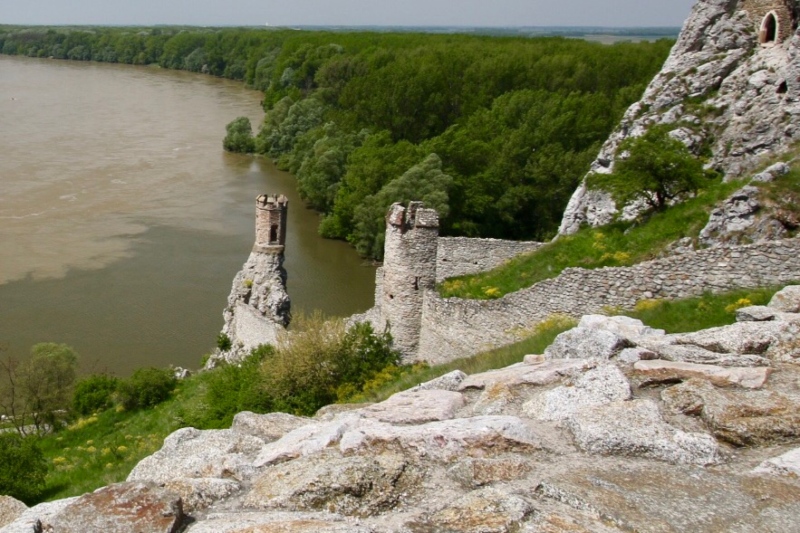 This! This is an iconic image of this castle. This little spire, known as “The Virgin Spire,” or “The Nun” is often, for good reason, featured. It is adorable. Behind it you can see where the clear waters of the Morava river come together with the muddier waters of the Danube.

Climbing into the various bits and pieces of castle, we had breathtaking views of the town below.

As well as amazing views of the keep itself. 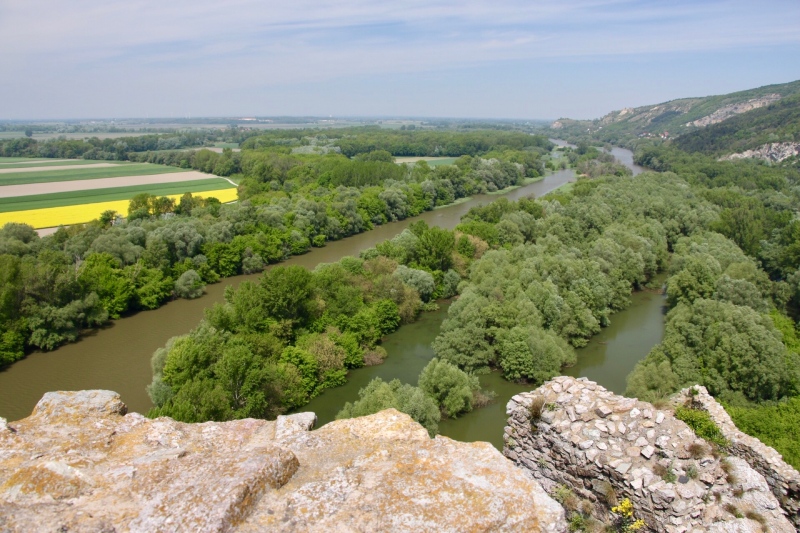 And in this view we are gazing up the Morava river. To the left of the river in this image lies Austria, and to the right is Slovakia.

Only by exploring the castle and walking her ways, was I able to really able to start to imagine her extent and nature.

Only with time and delving did I realize the extent to which she had solid expansive walls all about her, even though many have long since crumbled.

Finally, well into the afternoon, I headed back down to the base of the cliff, where I found this monument standing at the river’s edge. A plaque at the base explained everything: “The Iron Curtain used to stand here. It cannot be pulled away, it can only be cracked. Four hundred people sacrificed their life while fighting for their rights. Human being, free and unlimited, do not forget that freedom of thinking, acting and dreaming is a value. That is not only worth living, but also bringing sacrifices.”

There, across the Morava, was Austria, and 400 people were killed here attempting to escape from here to there. Here, at this river, serene and sedate, was the Iron Curtain. Another, newer, wall that once stood in this place.