As I have stated before, there are numerous animals here on the farm. The dog’s name is Billi. There is another dog, Rocky, that we don’t see much. The cat is Micci and the donkey is Ciccio. But Billi is a trouble maker (who doesn’t like to stand still for photographs).

When I walk outside he comes running.

And when he is near I pet him. And I play with him. And I scratch him. When I sit to eat, he puts his head on my lap, and I don’t stop him.

And when the proprietress of the house sends him outside, he goes just far enough beyond the threshold that she leaves him alone. And then, when she is not looking, he returns. And I encourage him more.

It is possible that I am the troublemaker.

This morning I did not see Billi, and this made me a little bit sad, for our time had come to move on. So D and I settled up with the hotel and headed out on the road passing numerous piles of garbage scattered here and there. I think they don’t have garbage pick up around here – or don’t want to pay for it – so the locals just dump their trash at a few designated points. I suspect it is all an unofficial organization. It’s kind of gross, to say the least.

Our path took us below the Ridgeline of the Temples, and we got one last amazing view of the Temples of Hercules, the Conchords, and Hera. Finally, despite the navigation app’s desire to reroute us repeatedly, we had eventually put Agrigento well in the rear view mirror and were on our way to Siracusa.

About two hours into our three-hour drive, I became hungry. More precisely, I was ravenous. When I’m ravenous, I get cranky. So I hopped online and found a restaurant along the route. We pulled into a town that was worn out, run down, and mostly empty. This place probably hasn’t seen an American in a decade, but that didn’t deter us as we pulled into a parking space in front of a boarded up, graffiti covered building.

As we walked into the restaurant, the owner’s friend greeted us, asking in English how we had found it (he was the only person there who spoke English), and I explained. When I asked whether our parking place was legal (we have had problems with that, you know) he asked which car was ours. Ultimately this question led to some paranoia on my part, having heard enough problems about theft in Southern Italy, but in the end all was well.

We had a seat in the very cute lunch room and they proceeded to try to take our order. Rather than offer us a menu, which the friend explained was not available in English, they suggested they would just bring us delicious Sicilian food. This sounded great to me, and I told them so, explaining that I will eat almost anything, but then I also informed them that D has certain dietary restrictions. It’s just easier to be up front about this as primary elements of the Sicilian diet are eggplant, zucchini, and fish, none of which he eats.

This was my antipasto dish, which was fantastic. D had a plate of meat and cheese. We were both extremely satisfied. My pasta was homemade tagliatelle with porcini mushrooms and sausage. D’s was a pasta with pistachio pesto and pancetta. We were both sated and happy after lunch, and ready to resume the trek.

Our end goal for the day was the Parco Archeologico della Neapolis. This is another site of ancient Greek ruins.

This site is best known for its theater. I’ve seen numerous Greek theaters and every time I pause and stare and remind myself to breathe. This one could seat approximatly 16,000 people. I stood there, about halfway up, imagining what it must have been like when fully intact. 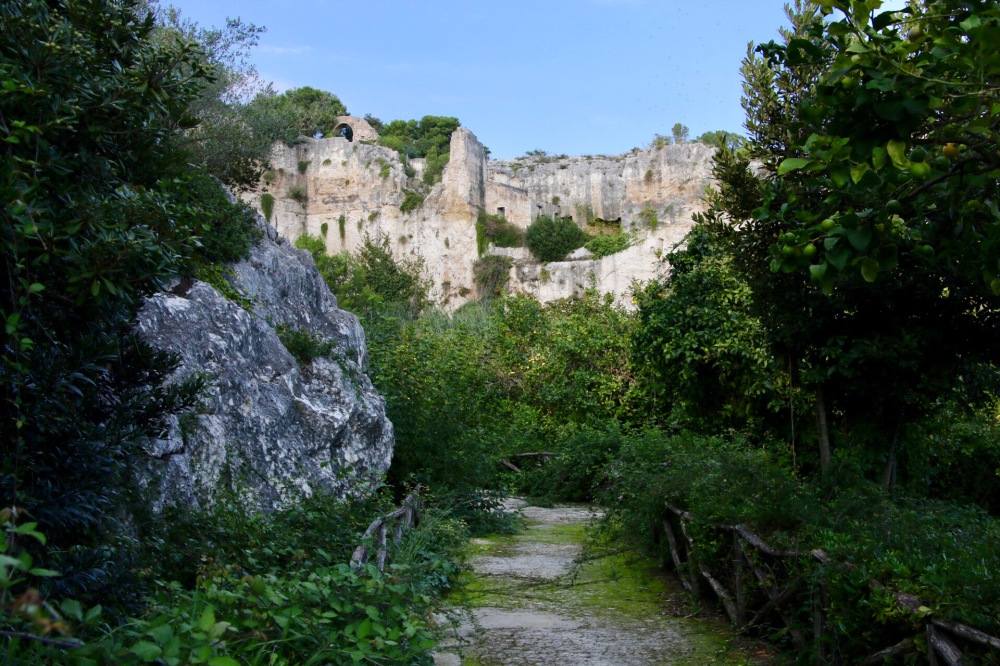 Also within the park is the ancient quarry, now a garden, which offers a refuge of solitude from the busy streets above. The guidebook notes that this is  where 7,000 prisoners of the war between Athens and Siracusa were held in 413 BC. It strikes me that they may not have considered it to be a refuge.

And within the quarry is the “Ear of Dionysius” which carries and echoes sound magnificently. Everybody who goes in is excessively noisy, because we all like to hear our own echoes.

On the way out of the park, to the right, is the Roman Amphitheater. It isn’t as well maintained as the Greek Theater, but it is still very impressive and evocative of a good deal of contemplation.

With that, we finally headed toward the island of Ortygia, in the heart of Siracusa, from where we will be completing our trip.