The traffic pressed tight around our car, closer than even L realized, as she jumped when she saw the bus a few inches outside her window. This is Lima, a colloidal mix of impoverished neighborhoods where trash overflows into the streets and mixes with exhaust to perfume the air, and wealthy restored neighborhoods where pedestrians stroll in the balmy afternoon sun. And everywhere there is a density of traffic that goes well beyond Rome, and is perhaps even worse than Naples.

This is Lima, a sprawling metropolis that has grown well beyond the old city center, the Centro, into scattered neighborhoods that lie far afield and are difficult to reach. There is no apparent public transport here, except for overcrowded buses. The taxis are unregulated and dangerous. We, like most tourists, are staying in the suburbs and are using Uber to get from our B&B to the more tourist-friendly neighborhoods.

The Centro is not the vibrant city center most of us would expect. This is the heart of Lima where the Spanish Colonists first founded the city, but it has had a fitful existence, being gradually decimated over the years by earthquakes, corruption, terrorists, and drug traffickers. Lately, however they have worked to restore it, and much like Detroit, a thriving food culture is developing.

We have one day in Lima, and from all of my reading, and despite all of its faults, we should go to the Centro. We call a car and are on our way. During the ride, which was markedly more frightening than any cab ride in Italy, I came to the conclusion that the homegrown terrorists, who wreaked so much havoc in the 80’s and 90’s, are now professional drivers, inspiring fear in entirely new and creative ways.

Our driver dropped us off at Plaza San Martin, where the grimy claustrophobia of the neighborhoods opens into a grand, lush park. We come here first so that R and L can get some cash, which ultimately required using one of the exchange services. R’s bank won’t commit to allowing him to process an ATM withdrawal in Peru, as crime is still an issue in some places.

This mission accomplished, we head to the north, and the Plaza di Armas, on the way stopping to visit Iglesia de la Merced, erected at the site of Lima’s first mass in 1534. Today, we have arrived during Thursday morning mass, so we keep ourselves on the periphery, gazing at its ponderous patterned walls, which reflect the various European and Amerindian influences on its architecture. 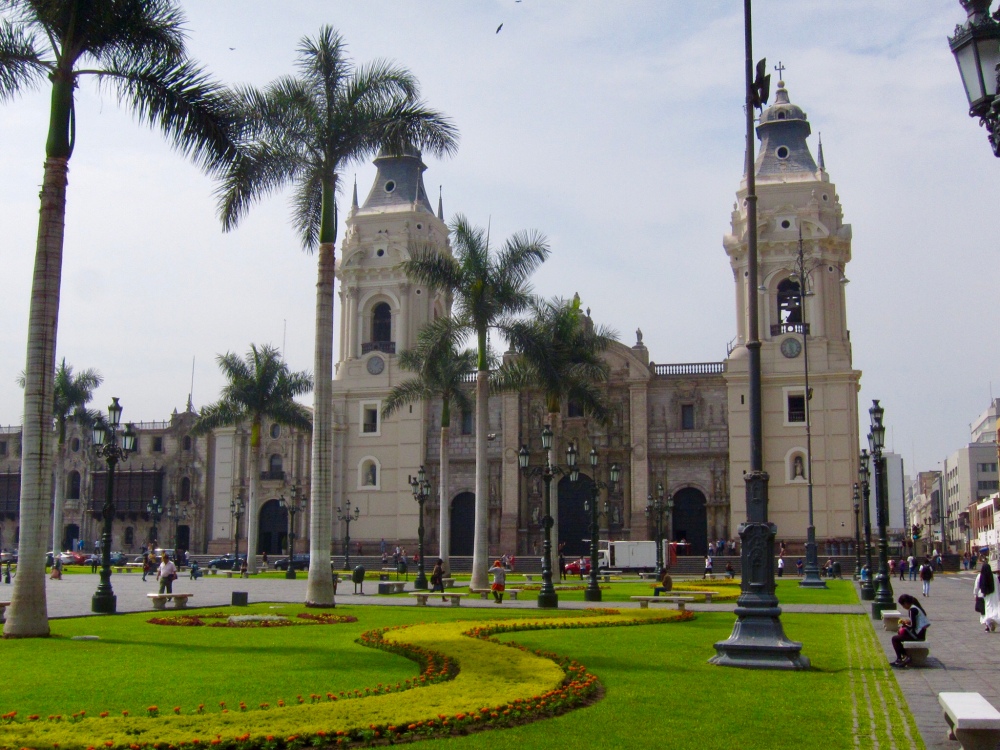 Back into the streets, we continue our walk, and eventually come to a newer, grander park, a vast oasis from the city, which by the hour of 10 am, is already baking under the unforgiving sun.

On the east side of the park is the Cathedral de Lima, completed in 1625, which grandly evokes the tastes of the Spanish Conquistadors. The European styling here is instantly familiar.

Unlike most Catholic churches, they charge for admission, which they do by labeling this as a Cathedral museum. Immediately to the right on entry is a monument to Pizarro, who conquered the Incan Empire for the Spanish. As I read the summary, it involves basically the slaughter of 5-6000 Incans and the raiding of the riches of the Incan Empire. Read about it on Wikipedia. After reading the summary (admittedly, written from Atahualpa’s point of view), I don’t really like the monument very much.

Also adjacent to the square is the Palacio del Goberno, or governmental palace. This, like the entire area of the square, is opulent, clean, and gorgeous. And all of it belies the extremes of poverty just a few blocks away.

Lima, we decide over a lunch of delicious ceviche and pisco sours, is not a place for tourists, or at least not an easy place. There are other things to see and do, but they are scattered far afield. At one time we considered spending more time here, but we are all in agreement that it is time to move on. This is a place, I think, for people who are settling down for a long time. Then a visitor can start to learn her in’s and out’s, pry her secrets from her, and learn to really love her. Short of a long commitment, a day is enough, perhaps more than enough, in Lima. And, indeed, tomorrow we go to Cusco.