The driver who picked me up at the airport spoke no English, so I rode in silence next to him, gazing out from the passenger seat, taking in the tropical urban landscape around me.

Hanoi is a fascinating juxtaposition of developing-world decay and modern 21’s century architecture. Some of the buildings are old (but not ancient), and have clearly been neglected. But scattered elsewhere on the skyline are tall modern skyscrapers. 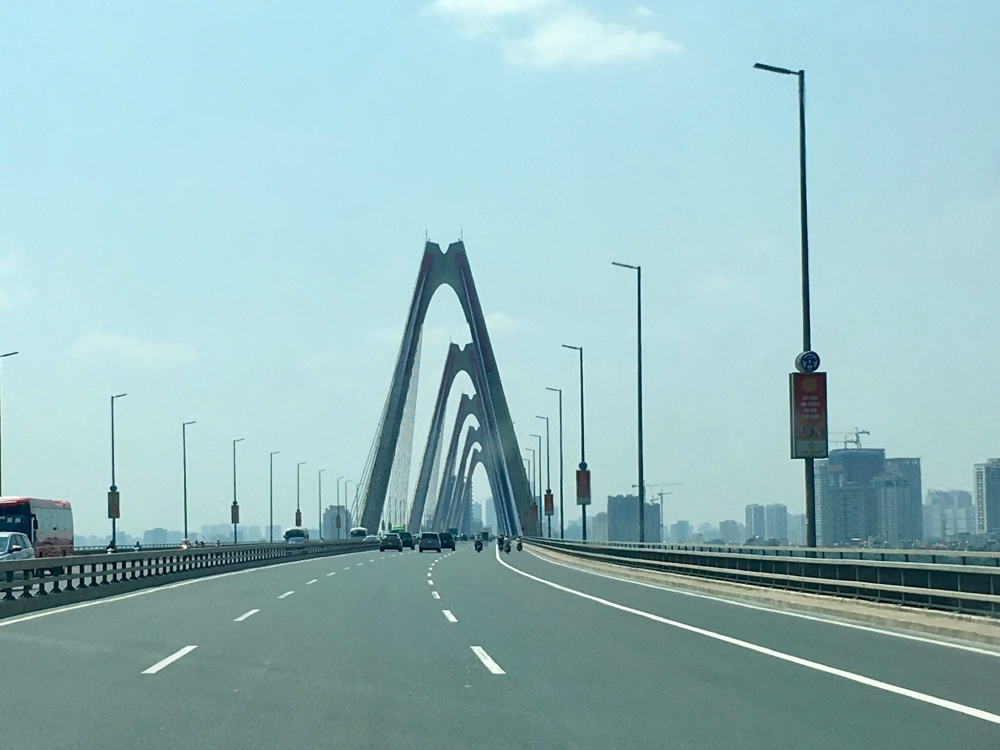 And the roads are mostly very up to date. Wide asphalt boulevards greeted me outside of the airport and contemporary bridges marked our path. Even in the Old City, where my hotel is, there are often sidewalks and demarcated crosswalks (although nobody seems to use them).

I checked into my hotel, but the room wasn’t yet ready, so headed out into the neighborhood to get some cash from the ATM as well as a SIM card for my phone. 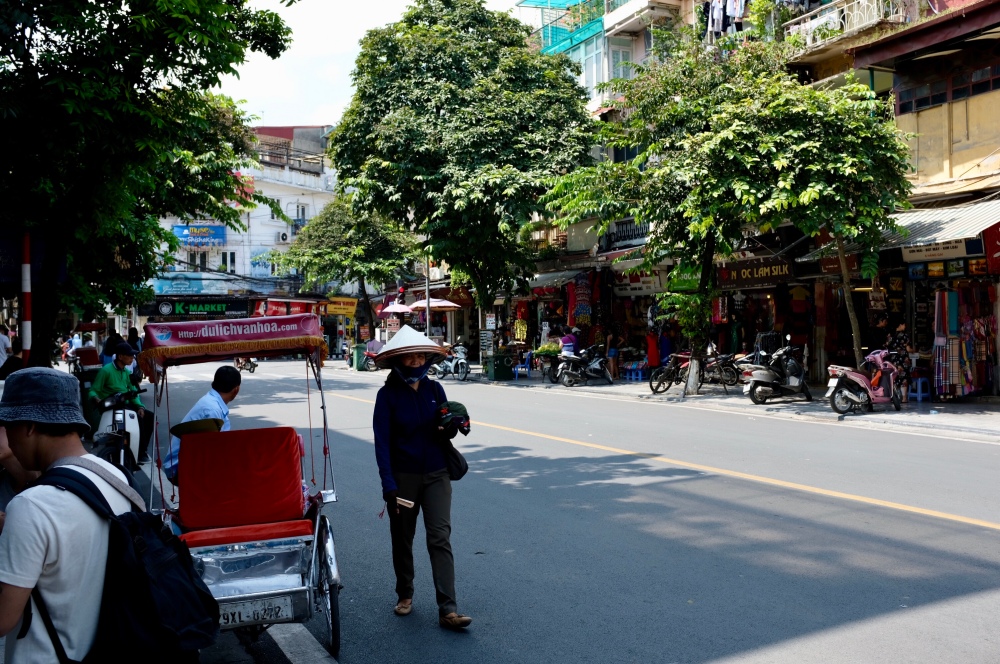 The streets in the old city are enrobed in trees pushing through the sidewalks at their edges, and becluttered with shops of all varieties. The few private cars seem to be of luxury nameplates, whereas scooters move along with a chaotic pace of frenetic acceleration and near-emergent stops on a regular basis. Pedestrians here just step into the street and hope for the best. And it all seems to work out, strangely enough.

In preparing to buy my SIM card, I’ve read that the cards must be registered with the government, so I was careful to go to a major dealer. The woman asked how long I was staying and sold me a 9GB card for $9. That’s a pretty good deal, but standard in these parts. When I asked if she needed my passport she informed me, “you won’t be here long enough.”

My take is that she didn’t want to do the Vietnamese government paperwork, and expects the card to be deactivated, but not until after I have gone home. 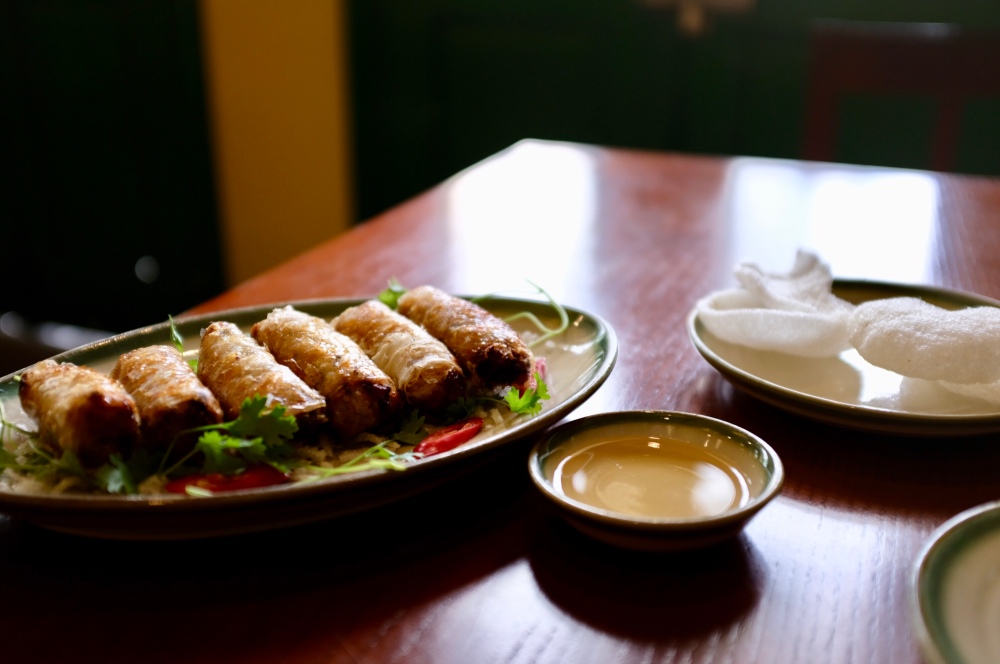 My phone now fully functional, I was ready for a much-needed lunch, but Tripadvisor and the hotel both made recommendations that were blocks from me. Still, I finally managed to find something close by and settled on a lunch of Vietnamese spring rolls and a local beer. At $5, I’m sure I overpaid by local standards, but it was well worth it.

Back at the hotel, I decided a nap was in order, and I slept much more deeply than I would have imagined possible, barely waking in time for my 6pm food tour. I did a food tour my first night in Marrakech, and that worked out great, so decided that would be a great introduction here as well. I wasn’t alone this time as a guide took me out with two Australian newlyweds and two German smokers for an evening of street food. 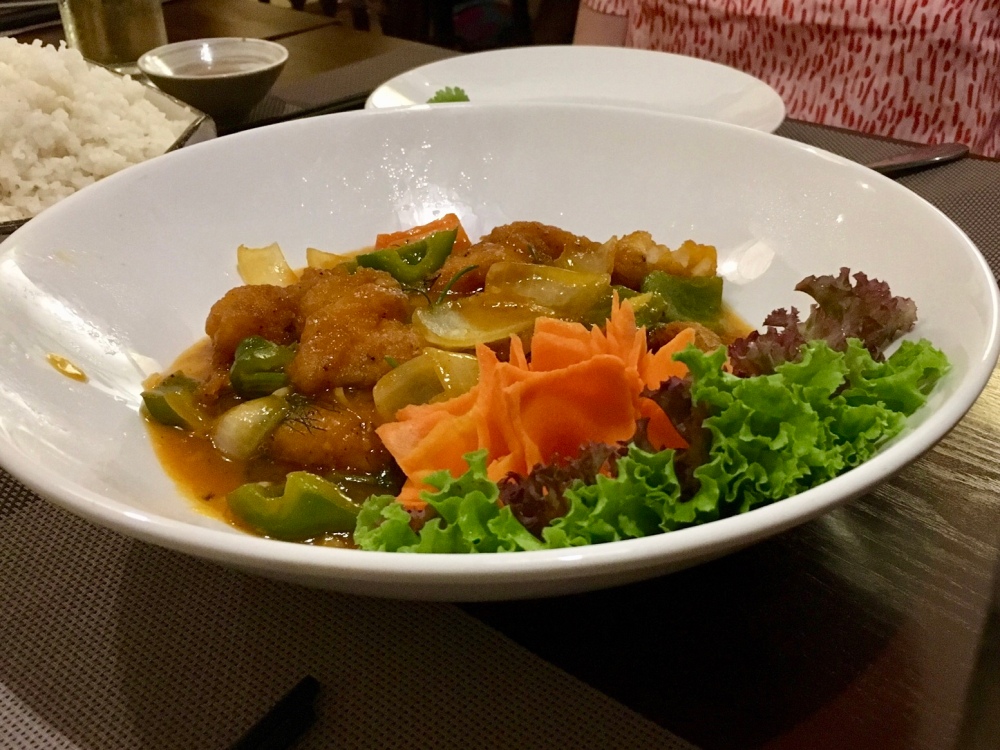 There was this fish with sweet and sour sauce. 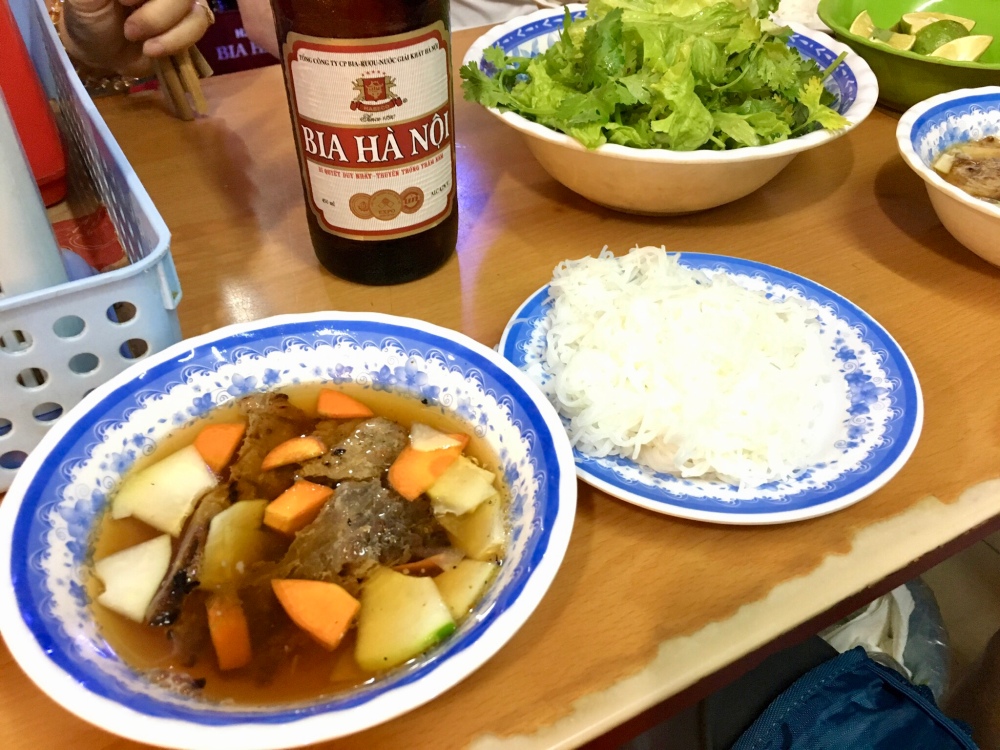 And this bun cha, which they now call Obama’s dish, is a meal of grilled pork with noodles.

I’ve had a lot of sandwiches pretending to be banh mi before, but this was just amazing. I’ve never had a baguette like this in my life.

I failed to take a photo of the egg coffee but it was spectacular. I know it sounds weird, but I think the egg is whipped with sugar and dolloped on top, and it works. Trust me.

Travelers who read the blog will note that I’ve broken some significant rules of international food safety here. In general I try not to eat fresh fruits and vegetables (especially on the street!) unless they can be peeled. A few of these foods violated those guidelines, and there were a couple I didn’t show you as well. In any case there really is only so much one can do, so I’m just hoping for the best.

After our guide dropped us off, I wandered just a bit and made my way down to the lake where I lingered just a little while taking in the sights and sounds of Hanoi at night. And I finally returned to my hotel to sleep.