Last night’s dinner was followed by karaoke. The food on the boat is OK – but not what I’ve had in Hanoi (I’m still haunted by the memory of that green papaya salad from the first night) or even on the trail in SaPa. Anyway, some time after Hotel California, I excused myself to my cabin, fully intending to return, but the prior night’s foreshortened sleep on the train left me exhausted and instead I slept. 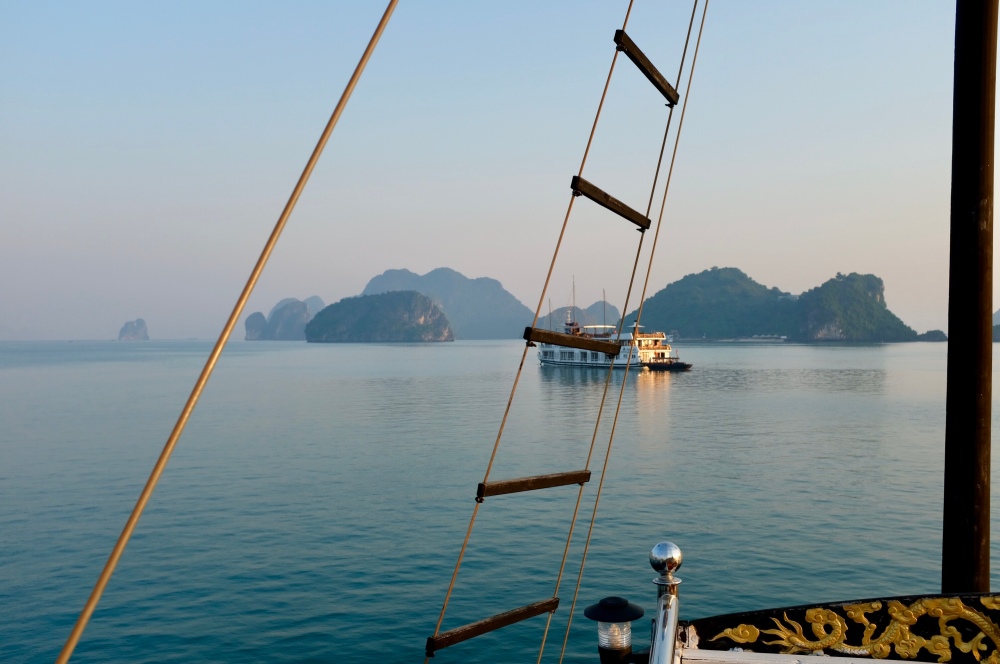 As it turned out, at 630 this morning when they offered Tai Chi on the top deck of the boat, I was the only one awake, having walked out of my cabin just after sunrise. I didn’t want to do this, however, instead preferring to enjoy the solitude of cool morning air. 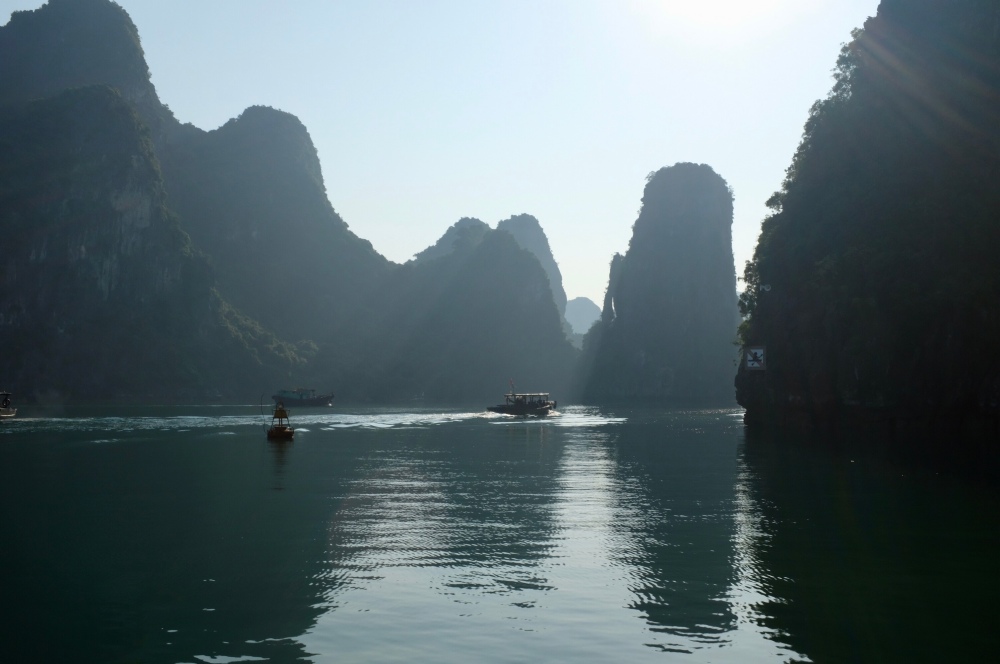 As I sat on the deck blogging and gazing out at some of the neighboring boats milling around, the other passengers slowly ascended from belowdecks and our guide came to lay out the plan for the day. After breakfast we would visit one of the many caves hidden in these isles. Then we would pack and have spring-roll-making instructions on the way in. And that is exactly what we did.

We anchored near the island and our tender delivered us to the dock. As we joined crowds of other tourists and climbed into the cave, the view of the bay was picturesque.

Incidentally, all the photos of Halong Bay show boats with strange sails, but while here I’ve noticed very few of the boats actually flying these sails. I suspect they are mostly decorative, rather than functional and if anything probably pose a hazard by making the boat too top-heavy. On some level they may offend me.

The descent into the cave is easy, and the cavern is beautiful with vast pillars, bizarre molten rock ledges, and lethally sharp edges. It was formed when plate tectonics thrust these islands out of the ocean. The stalactites and stalagmites still get some contribution to their ongoing development from rainwater but that is a minor factor in their overall formation.

Back onboard our boat I pack and head up to the top, where we enjoy the perfect weather for the ride in. Around us the boats gradually grow dense. For the most part we see only tourist vessels, but an occasional fisherman also passes by. 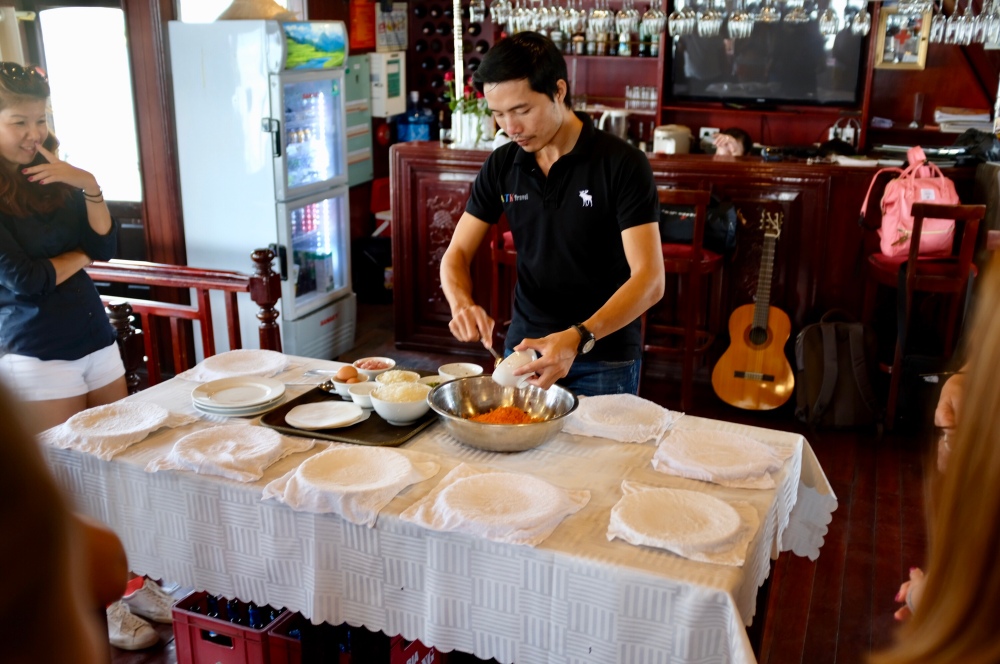 As we approach the harbor our guide teaches us how to make Vietnamese fried spring rolls, which are then cooked as part of our lunch. I’ll have to practice this, I guess.

The ride back to Hanoi on the shuttle bus is uneventful and I am back in my hotel shortly after 4 pm, and starting to prepare my bags for the trip home. About 5 pm, my friend S (my guide from the motorbike tour) picks me up for dinner. She had offered this earlier in the week when I had other plans, but tonight it is perfect

I don a too-small helmet (my cranium is massive) and climb aboard her bike. This is not the Minsk, but a newer much more able scooter. Tonight she is a much more aggressive driver, darting into and out of the smallest gaps on the road, running red lights (they do that here) and driving on the wrong side of the road. And it is all OK.

The first stop is a fundraiser one of her friends is hosting to raise money to feed the homeless of Hanoi. We find it in a walled-in beer garden hidden down an alley behind the flower market. There I meet some of her English-speaking friends and we sit and enjoy beers in darkening evening.

Beer, I have noticed, seems to have a certain prominence here, although there are only a few brands: local beer, Bia Ha Noi, Bia Saigon, Tiger Beer, and less frequently Heineken. It is sometimes cheaper than water.

Back into the streets, we sped off to the Old Quarter where we stopped for a dinner of Chinese noodles, and then S deposited me back at my hotel where we said goodbye. In my room I assessed my luggage and decided that I was largely packed, and although I had planned an early evening, I decided that perhaps I should go out and explore the night market instead.

And when I did I found that the streets were packed with shoppers and revelers. Through it all I strolled along at a relaxed pace soaking in the spectacle and insomniac energy of the surrounding city.

I had this ice cream, and as I continued along made one small purchase.

And even though I didn’t need it, my feet sought out the green papaya salad for which I have continued to yearn, with its bits of dried beef, peanuts, and mint.

As I ate the last few bites, I was at peace and ready to begin my long journey home.