Aphrodite was the Greek goddess of love, and to hear Yavuz speak of the ancient city of Aphrodisias, he is obviously enamored. He clearly loves archaeology, history, and his job, but when describing Aphrodisias, his language changes. He speaks a little more softly and delicately, adopting the language of the poets and the romantics, and he declares authoritatively that she is the most underestimated site in Turkey.

For me, although I cannot compare it to many other sites, I concur that it is spectacular.

The small village of Geyre sat here until the Turkish photographer Ara Güler found himself lost as night fell and took shelter there in 1958. That evening, he observed the local population of the town making casual use of bits of ancient relics. When the sun rose, he found himself surrounded by the remains of the ancient and forgotten city of Aphrodisias.

Aphrodisias was a center of sculpture in the ancient world. This is where budding sculptors would come to train, and where they labored to build the most beautiful city in the Empire. And this is where many of the busts of Roman emperors were made. Upon entrance, one of the first things visitors encounter is a wall of carved faces from the frieze blocks of the Agora. They laugh and cry and scream, and they look bored.

Young and old, they are remarkable. 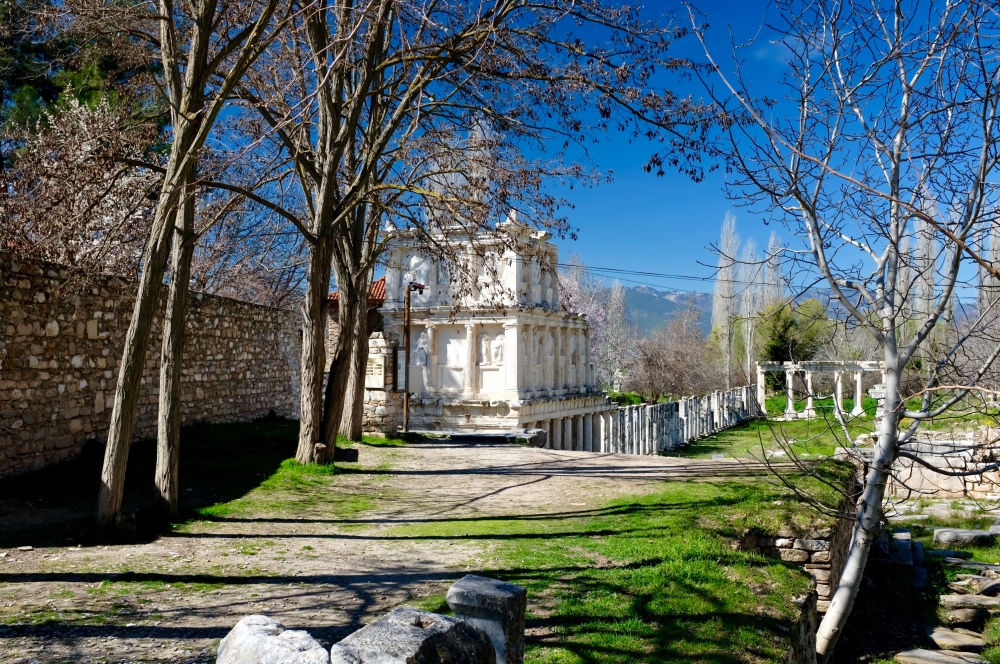 Nearby is the Sebasteion, a massive temple to Aphrodite and the Roman emperors. A small bit of the structure remains standing to the left (or perhaps it was rebuilt) but the majority of the reliefs that still exist are on display and sheltered from the elements in the museum nearby. 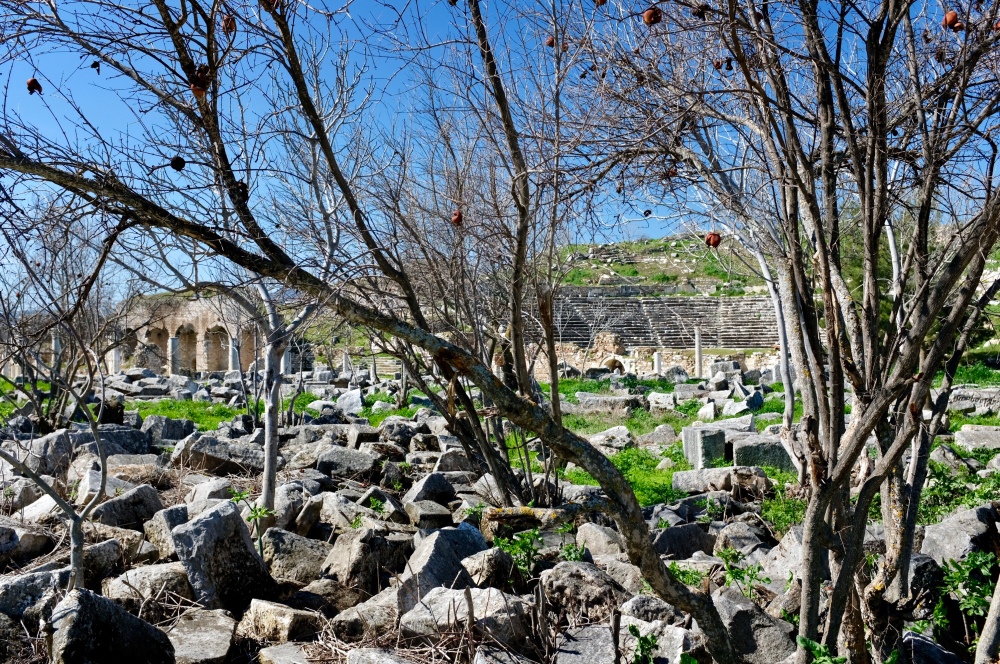 We continue down the gently curving path to the ancient baths and the adjacent theater. 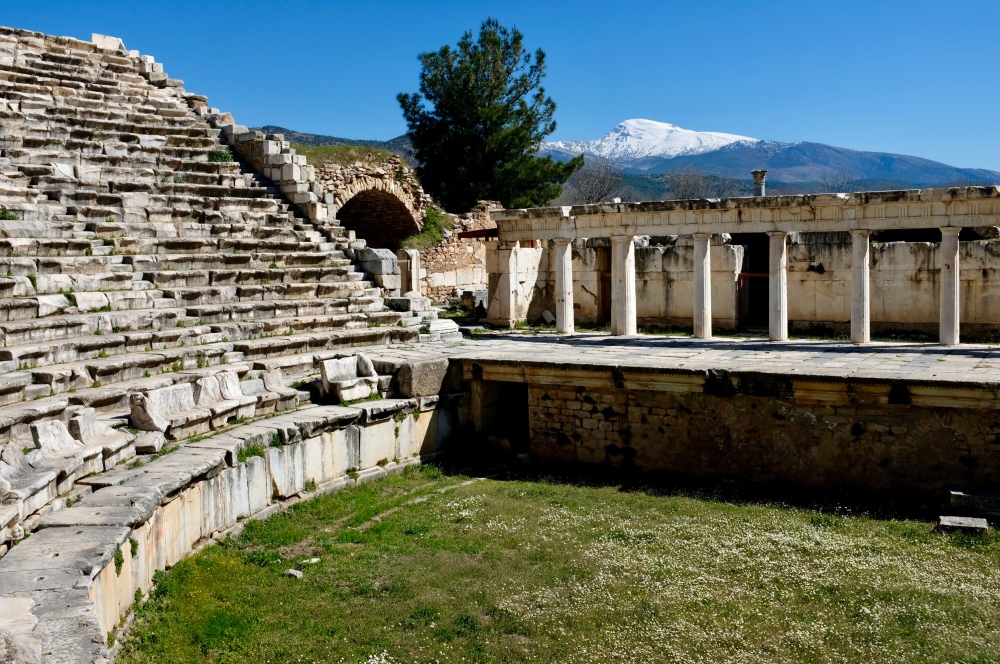 On the floor of the theater, bees buzz loudly among the carpet of early spring flowers, and it is difficult to estimate their number as the acoustics of the place magnify them immensely. I eventually walk over to where Dan and Yavuz are seated near the front corner of the theater, talking under the bright sun of a cloudless sky, and just enjoy being here, in this time and this place.

We return to the pathway, and our route carries us back through the baths and then behind the hill of the theater. As we do so, somewhere in the distance we see a large set of bulky brick ruins. Yavuz taught us just a few minutes before that this basic structure is a giveaway that we are looking at baths, which were common in Roman cities. And indeed these are a second set of baths, the Baths of Hadrian.

Opposite these baths are the remnants of the vast ancient agora, with its massive central pool. For me, here, Aphrodisias is coming together and I am falling under her spell. She is supple and graceful and unique and spectacular in every way. 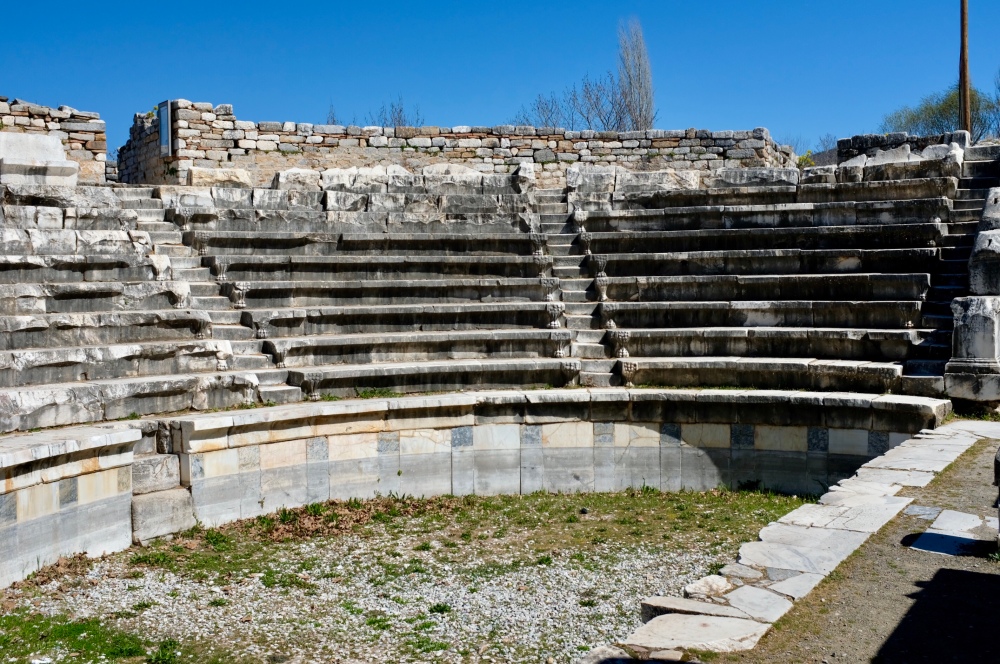 We move on, and the sights are becoming ever more grandiose. Even the boulouterion, or council house, which is basically a small theater, stands intimate and wonderful. 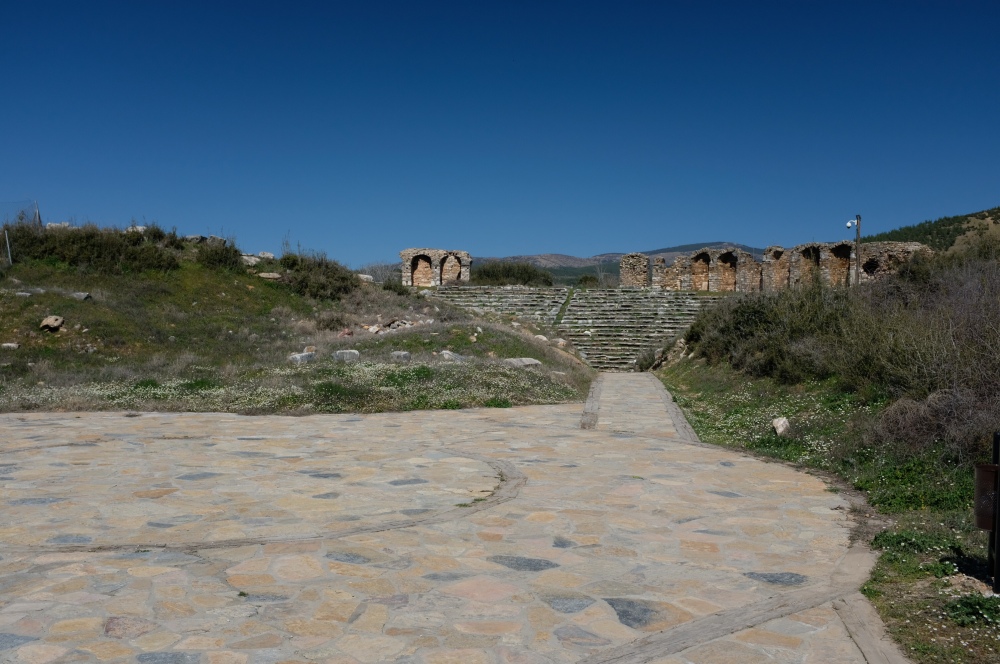 Yavuz tells us that even greater things lay ahead, however. And as we walk, our pathway becomes pleasantly paved, and more seats come into view. I imagine another theater in the distance, but this was not to be the case.

We had arrived at something even more vast and mind-blowing then I could have imagined. In all of my travels I’ve never before stepped foot into an intact stadium. Her long slender courses instantly brought to mind images of chariot races and battles under the eager eyes of fanatical throngs. Here was joy and heartbreak. Here, in this place, ancient people witnessed victory, defeat, and death. And, certainly, brutality. This stadium isn’t fully intact, of course, but it’s mostly there, and even despite the seating blocks that lay off kilter, its splendor is breathtaking.

Leaving the stadium, we head toward the exit, pausing to gaze at the tetrapropylon, the exquisite gateway to Temple of Aphrodite, which stands behind it in the distance. Nearby, we also offer our respects to the archaeologist Kenan T. Erim, who dedicated 30 years to this site, and who now rests here for all eternity.

And by the time we at long last bid our farewell to Aphrodite, I have been bewitched.