Yesterday, lunch was conference food. We will speak of that no more.

Last night found me at the dinner table with an old friend, JK from UC. She and her husband are really both wonderful people and I’m so glad I got to see them. We ended up at a tavern recommended by their Rick Steves guidebook, and the place really looks the part of a Tyrolean inn. There were even antlers on the wall! 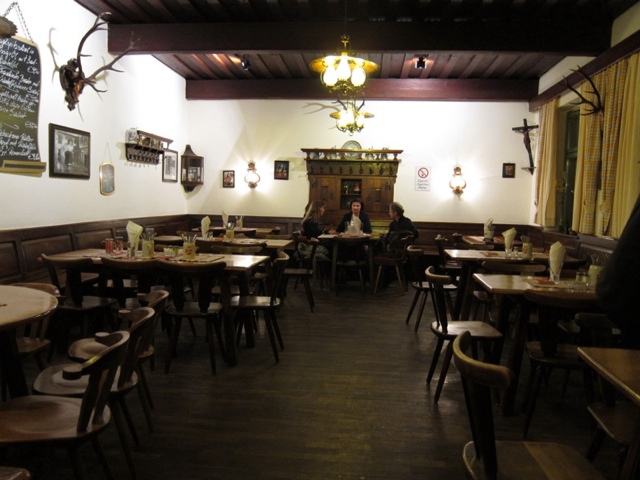 In perusing the menu, I decided to try the goulash. It was served with potatoes and another leaded dumpling. Apparently they are supposed to be heavy. If you dropped one on your foot you could get seriously injured. I think they also used them as cannonballs in the middle ages. The goulash itself was really very nice, though – truly homey comforting food. I would order it again. The potato was a potato. Not much more I can say about that. Sorry.

Dessert. I’ve said little about this ever-so-important course so far. Why? Because, appallingly enough, it hasn’t happened (but that is a story for another post). Tonight I had nut crepes with chocolate sauce. The crepes themselves were too thick, but that’s the worst of it. Just loved the overall flavor and presentation. I wish I could remember the German word for whipped cream. I think it begins with “gob…”. Definitely not a case of onomatopoeia.

One of these nights I will have wienerschnitzel und strudel but haven’t done so yet. Yet.

One thought on “Comfort Food and Antlers”