Another after-the-fact post. Ah well… the pictures will have to suffice for much of the information.

Last week I jokingly suggested the theme for this week would be dumplings. Fortunately, I’m the only one who took it seriously. Mitch and Eileen brought savory eclair-style cream puffs with smoked salmon mousse. I have to admit that in the past I haven’t been a fan of most sorts of fish creams, mousses, etc … but this was really quite delicious. Mitch shaped them to match “the eyebrow” (which horrifyingly was brought back to TC this week), and they were soft creamy and delicious. Really delicious, despite the unfortunate shape.

Joe brought an ATK pork tenderloin with onions and apricot pepper sauce. This was tender and delicious. Cooked to perfection, and the sweet heat of the sauce was a nice pairing to the pork and onions. Pork tenderloin … yay! 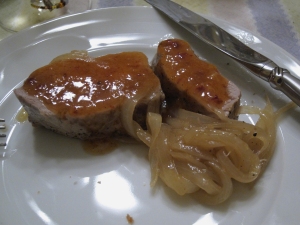 And me? I followed through with dumplings, making Topfenknödel. I struggled to find a recipe that I could interpret in terms I could apply in the USA. In the end I basically used elements from the recipes I found here and here. I’m going to post the summary of my technique though, because I was really pleased with it in the end.

First of all, when you find these recipes online, they call for “curd” … I really don’t think this means cottage cheese (although some recipes call for it, I suspect this is a bad translation). And it also isn’t ricotta – to the best of my ability, I have decided it is quark.

Quark isn’t easy to find in the US, but it is around at some upscale markets, and that’s what I used. One recipe said if you can’t find it you can use ricotta, but that the ricotta can be too wet. I would have to compare, side by side, but I thought the consistency of the two was similar. Still it ended up pretty wet anyway, so straining it in cheesecloth wouldn’t be unreasonable.

Another point … some recipes called for bread in the “dough” and this seemed wrong to me. The Topfenknödel I had in Austria didn’t seem to have bread in it, so I avoided these recipes. I ended up using a recipe that had flour, which worried me a bit, but worked out OK in the end. In the future I might try assembling the dough the night before, but this time I did it about an hour before I used it, and there wasn’t much time for the moisture to absorb into the flour, so it seemed perhaps too wet and sticky. More time would have been better, I think (but maybe that’s not right?).

The recipe said to cook for 12 minutes, until they float but I cooked longer, because it only took a couple minutes until they floated, and at the “float point” they still tasted flour-y. This was a good decision, as the extra cooking got rid of the raw-flour taste. As far as texture is concerned, in the end they were still really soft when they came out of the water, but firmed up as they cooled off.

Finally, I served the Topfenknödel on a bed of maple syrup blueberry sauce that was a nice companion. I worked on presentation here a bit more than usual, and think it looked pretty decent in the end.

Here is the recipe for Topfenknödel. And yes, I used weights in grams, because it was easier than converting units. If you use it, let me know.

Melt butter in a large pan. Add the breadcrumbs and fry a golden brown. Move to a bowl and mix in the brown sugar and cinnamon to taste. It should be lightly sweet, with just a hint of cinnamon flavor. Set the bread crumb mixture aside to use to bread the dumplings later.

Serve with fruit sauce/jam/compote of your choice. Chocolate sauce would also work well. And whipped cream was a nice accompaniment

I feel bad about this post. We didn’t love Hugh Acheson at the time, but I really like him now. And I sympathize with the unibrow, as I dealt with it myself at one time in my life.

I have a recipe in this post. I have a few recipes on the blog, and my basic process is on full display here. Basically, when I’m looking for a recipe for a specific item, I look at a bunch of different recipes and cobble together something that looks good. I haven’t made this since that night, and probably need to remedy that.