It’s Thursday, 23:11, and M and R just had to leave.  Dinner tonight was outstanding.  The theme was chocolate, and it was a big week for both M and R, so I felt it was time to go over the top. 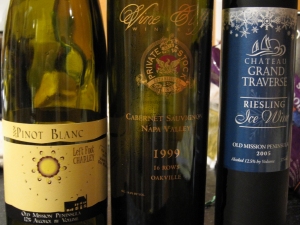 First, the wine. We featured 3 wines, and added a fourth.  The 2009 Pinot Blanc from Left Foot  Charley was, as always, stunning.  Left Foot Charley is fantastic, and I absolutely love almost everything they do there.  The second wine (with the main) was a 1999 Cabernet Sauvignon from Vine Cliff.  I’ve been hoarding this wine for almost a decade.  It is a special bottle to me on a personal level, and tasted like it.  The tannins were soft, and it matched very nicely with dinner.  We tossed in a 2004 CGT Edelzwicker that was probably a bit past its prime but in reality had aged quite well.  It wasn’t quite as bright as it could have been, but certainly well done.  Finally with dessert we had the 2005 CGT Reisling Icewine.  Wow.  So so so so good.  The wine tonight was just incredible. 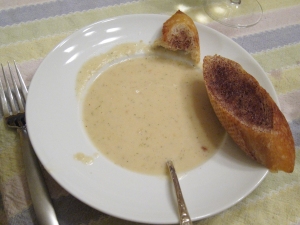 How about the food?  Well we started with M and E’s Roasted Parsnip and Vanilla Chocolate Soup served with a cocoa crouton.  The earthiness of the parsnip was a nice mate top the sweetness of the white chocolate.  The soup was smooth and slightly sweet, and overall a resounding success. 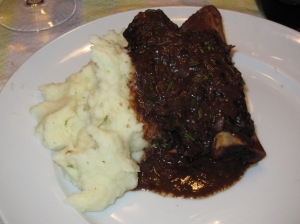 Tonight I made Braised Short Ribs with Chocolate and Rosemary from Epicurious. I took some liberties such as increasing the pancetta, but this is just wonderful.  The chocolate is present but not overpowering.  And I paired it with White Chocolate Wasabi Mashed Potatoes, which were really nice.  The sweetness of the white chocolate was balanced really nicely by the heat of the wasabi.  This is a sublime combination and I’m just giddy by how good it was (and it made it up!).  I have leftovers and can’t wait to eat them.

The first dessert was R’s Raspberry White Chocolate Cheesecake, and it was smooth and creamy and really well done.  The picture doesn’t begin to express how good it was.

The second dessert was M and J’s White Chocolate Strawberry Pie.  The texture was light and the chocolate flavor was subtle, but delicious.  I’m a happy camper right now.

How about the show?  I remain disinvested in the cheftestants.  The show is just boring me so far, and we may have to replace it in our viewing plans going forward.  One of the high points of the evening: while the cheftestants were cooking bugs, E said.  “It’s really gross.”  But she wasn’t talking about the bugs they were cooking.  She was talking about the eyebrow. Hugh’s huge man-eating eyebrow.  To put the quote in context, it follows with the declaration, “His eyebrow is just repulsive!”

Hugh of the repulsive eyebrow.  Well at least the food and wine were great.

I love cooking for and with my friends.