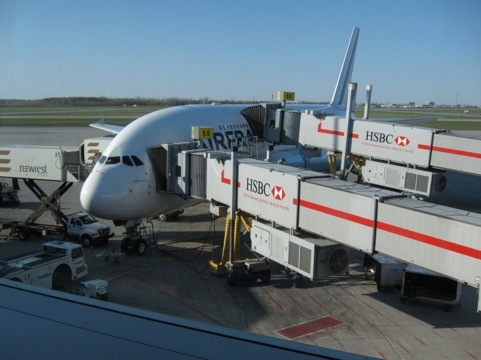 The flight to Paris is on an A380 … This is a big plane. It’s frankly mammoth. It has two decks, and I am on the upper deck. Takeoff was very impressive. We felt the engines power up, the thrust of the four powerful jets straining to move the beast forward. Yet inertia held for a few moments, time seeming to pause before we slowly lumbered ponderously ahead. And seemingly against the laws of physics we were aloft. There is a forward facing camera somewhere in the tail, via which we were able to view our own takeoff. There was something nauseating about it, curiously enough, but it was still fun to watch. I must concede that I like this plane. Once airborne, she gives a very smooth ride.

The booze is flowing freely on this flight. The first glass of champagne was served during taxi, with the second coming shortly after takeoff. This was followed by a Rhône red served with dinner, refilled mid-meal with a Burgundy. Finally, after dinner there was a digestif of Armagnac. By this point they had me at the point of collapse, so I laid the seat back and went promptly to sleep.

Dinner? Of course! This is Butterblogger, after all. It started with a fish terrine, Serrano ham, and herb cream mayonnaise. And of course a baguette and butter. The terrine was ok …. A little strange to my mind. It may be that I’m just not a terrine person, but the slice of fish-loaf just wasn’t that great. The Serrano ham was, of course, really nice, with a pleasantly salty delicate ham flavor. I didn’t understand the mayonnaise, however. It didn’t go with the fish, and it totally overpowered the ham. It was just this random smear of mayonnaise on the side of the plate, a condiment without a leading player. Weird.

The main was pan-seared tournedos of beef with green peppercorn sauce, green beans, and potatoes. This was really good airplane food, but not great overall. I liked the green peppercorn sauce, which was creamy and piquant, and the beef was decent. Now that I’ve been using the sous vide machine I recognize it’s signature appearance, and this was clearly sous vide beef: browned on the outside and very uniformly pink throughout. It wasn’t outstanding beef but with the sauce I was satisfied. The potatoes and green beans were ok, if a little boring.

The remainder of dinner was a cheese course and then dessert, which was an opera cake. Dessert was the highlight of the meal, as E will say it always should be.

Stoned from the many courses of alcohol, I slept though the second half of Moneyball, only to wake 4 hours later for breakfast. This included a fruit plate (with a piece of rambutan?) yogurt, and pastries. We had the option of baguette as well as the pastry but I had to beg off this. Just too much! 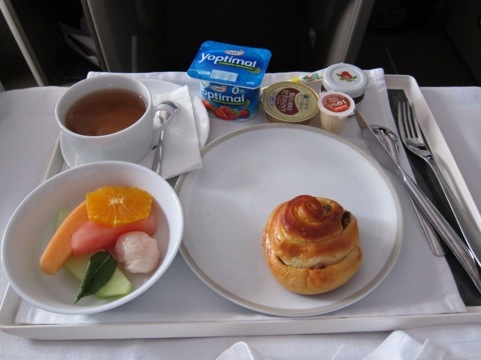 I tried to watch the rest of Moneyball, but we landed just before the end. So frustrating!

We arrived at CDG 30 minutes late, giving me just over an hour for my transfer. That should be enough time, but even under ideal conditions, a transfer in Paris is painful. The signs are cryptic, the airport is large, and I still had to go through passport control and security again for the next flight. Still I made the transfer without much delay (my ticket got me in the short line at passport control) and arrived just as the fight to Florence was boarding. I settled into my seat, enjoying the boarding music, only to realize they were playing “The First Noel.” I, and those seated near me, thought this an unusual choice for April 29. Oh well. 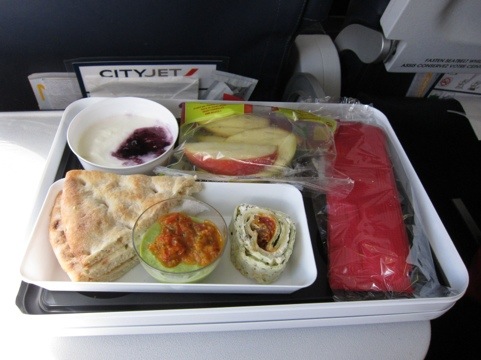 On this flight we were fed yet again at ~10:30. Yes, second breakfast. This came in a box, like a little Christmas surprise to match the music. Inside we found yogurt, apple slices, a piece of herbed cheese roll, a tuna cream cheese sandwich, and a small cup of creamy green “pudding” with tomatoes and basil on top. I really have no idea what the green stuff was. It may have been a spinach mousse, but it was almost entirely devoid of flavor, and pretty pointless without the tomatoes. None of this stopped me from eating it, however.

One more leg left for the day … The train ride to a city I love. La Dotta. La Grassa. La Rossa. She is Bologna.