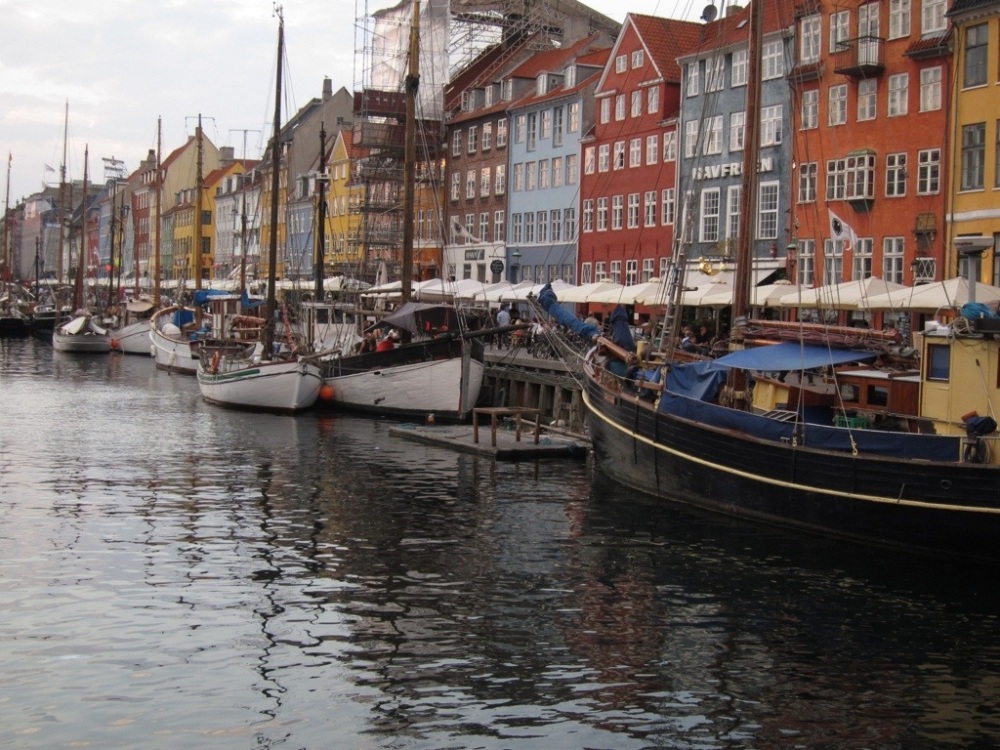 So I got up this morning expecting an entirely typical day, and for the most part it was. I went and had breakfast, which didn’t suck, and noted the other guy at my hotel who is also going to the conference. I knew this because he was wearing his name badge at a hotel 3 miles away from the conference center. Note to self: when not at the conference, don’t wear the name badge.

The conference was good, with one lighthearted moment occurring when one of the experts was trying to do an ultrasound using a machine he had never before used. I felt a little bad, because he was clearly frustrated that he didn’t know the knobology (ie which buttons to press – every ultrasound machine is different). On the other hand I was amused because we have all been there, and this time it wasn’t me!

After conferencing, I returned to the hotel and, finding mom, went downtown for the evening. The city is stunning – it feels very small and intimate, although I know it isn’t. I wish the conference wasn’t occupying so much of my time – I know I’m missing a LOT here. Downtown, we stopped at the harbor for a coffee, after which we wandered our way over to Maven where we sat down for a delicious dinner.

First we had our starters, of which mom had the pumpkin soup with rabbit terrine. This was served with salted pumpkin seeds, and was just incredible. At once it was both rich and light, and it paired perfectly with the Gruener Veltliner we had ordered to drink. 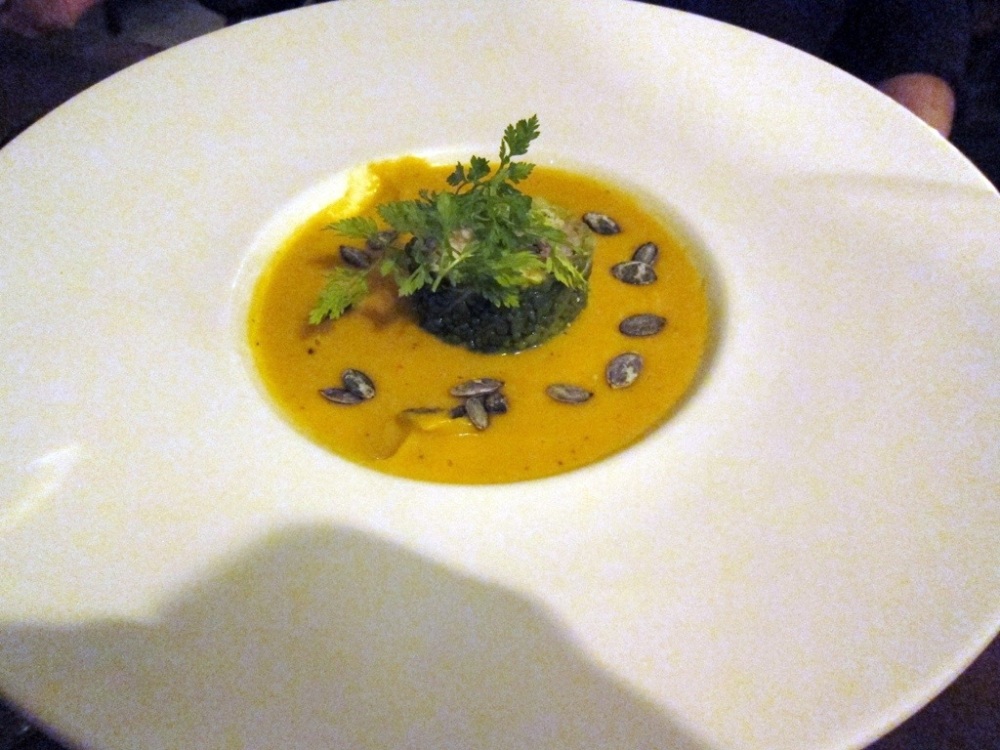 I started with the scallops, which were pickled in sugar and salt and served with smoked cheese, rye crumbs, and pickled mushrooms. So I have to admit I’ve only recently discovered scallops, and these were an absolute revelation. They were like two little ocean marshmallows. Incredible! The overall effect of the dish was remarkable. It spoke to me of a primeval Nordic forest, somewhere on the shore of the North Sea, with the smoke of bonfires blowing in from the distance. It was magical.

Next was the main course. Mom had the entrecôte with bernaise sauce (SO good!), roasted garlic, and fried potatoes. 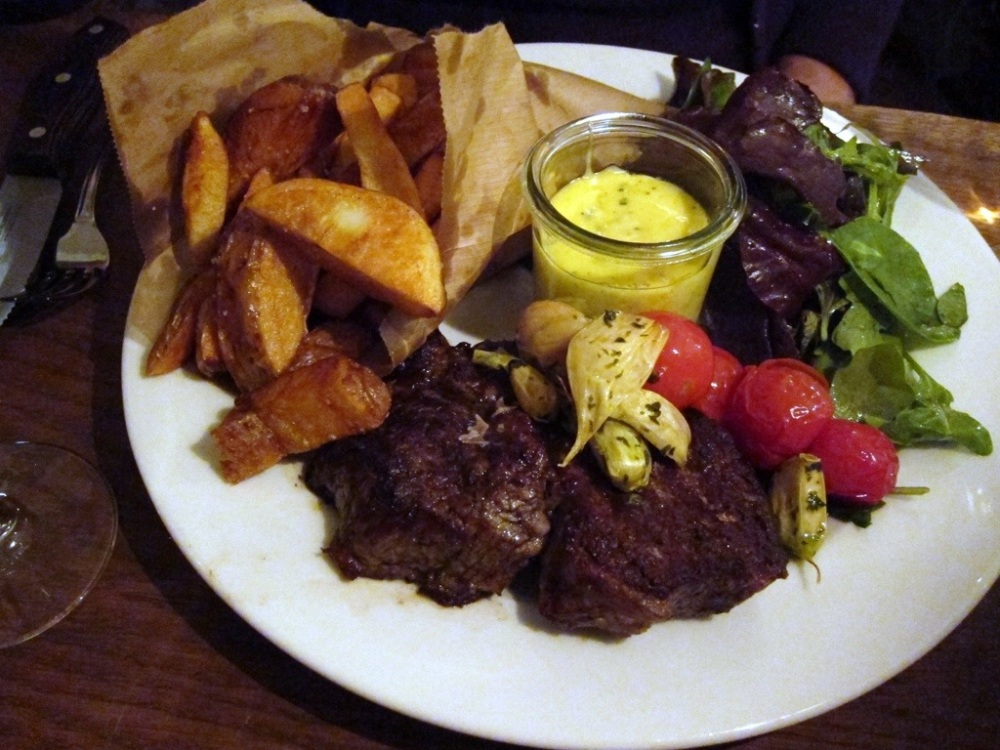 I had the lamb. The menu described it as being served “in variation,” an awkward term that I attributed to translational difficulties. As it turns out, the term was correct. The lamb was served 3 ways. The base was lamb braised in apple juice and shredded. It was melt-in-your-mouth good. Served over this were seared lamb chops. Further, these were accompanied by lamb sweetbreads. I had never had the latter before and there was delicate creaminess to them. They were great!

The lamb was served with celeriac (I need to do something with this) and beets. The beets left me floored. They were roasted and dusted with beet powder. The flavor was intense and I spoke with our server at length about their preparation. I don’t know if I can make beet powder at home, but I’m going to try. Until then, the server (was he also a chef or proprietor? I don’t know, but he was VERY knowledgeable) gave me a small stash to take home with me.

Finally was dessert. Mom had plums baked in honey with vanilla ice cream. She loved this, and so did I.

Eschewing a dessert, I instead opted for the cheese course (sorry, E) – three Danish cheeses: an organic Brie, a firm cheese (similar to a Comte) and a blue. The firm cheese was my favorite, but all were wonderful. These were served with rye toast, almonds, quince, and fig.

To wrap things up I had a glass of Guatemalan rum. It was smooth, mellow, and unlike any rum I’ve ever had in the states. Rum has become a mixer at home, and it can clearly be so much more. *sigh* 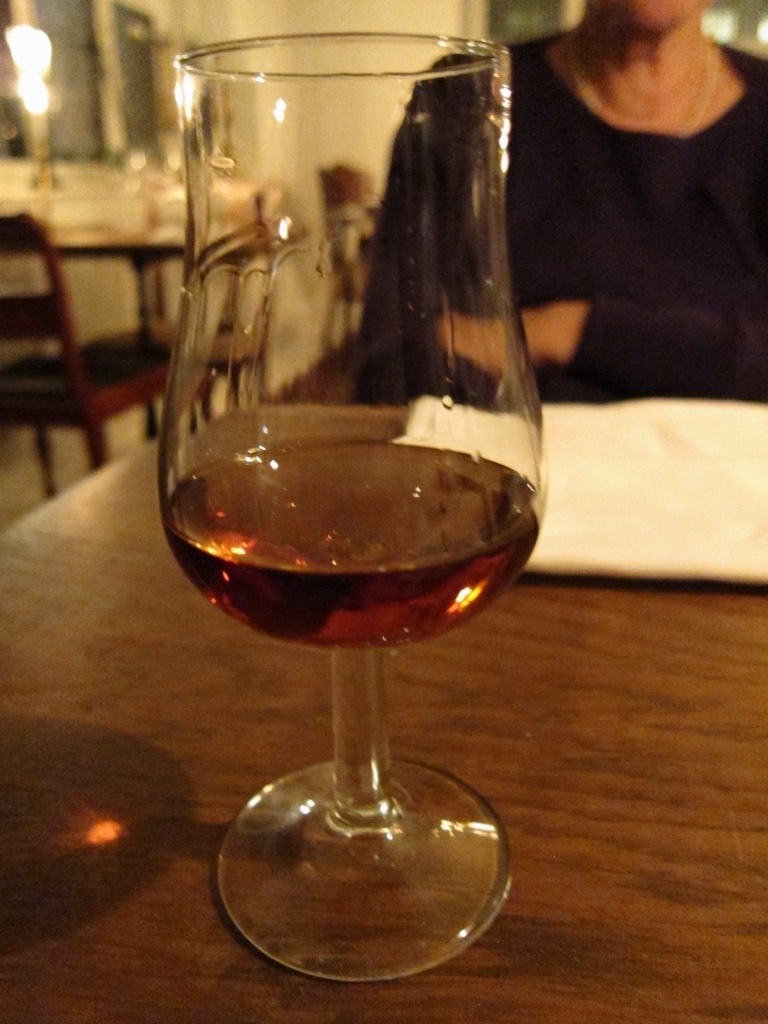 I am still considering options for dinner tomorrow …. It may be time for something simpler. Or not.