Another day in Copenhagen come and gone, and time for a few words before bed.

We aren’t staying at the conference hotel, and I’m glad. The conference is way outside of town – I prefer to be in the city, which is where we are. I like to be able to step outside the hotel and walk to restaurants, sights, etc. I take the metro to the conference every day, and that’s fine with me.

The conference was good today, but for the most part I sat listening to the workshops thinking, “Yup. That’s what we’re doing.” As one of the other participants astutely pointed out, however, I wouldn’t want to leave the conference with 600,000 new ideas, because that would imply we aren’t doing the things we should be. So this is good.

After the conference I met Mom back at the hotel. She had spent the day shopping, but unfortunately many of the stores were closed, as are most of the recommended restaurants. Lesson of the day: just as you don’t visit Italy on Monday, don’t visit Copenhagen on Sunday.

Since it was Sunday I decided today would be a good day to visit Tivoli Gardens, which was supposedly Walt Disney’s inspiration for Disney Land. It really is a beautiful park. Very calm, with lovely walkways and gardens. The rides are much smaller than Cedar Point. It is an intimate place.

Shortly after entering the park we saw the Nimb Hotel, it is an imposing structure that looks very Indian. More on this later. 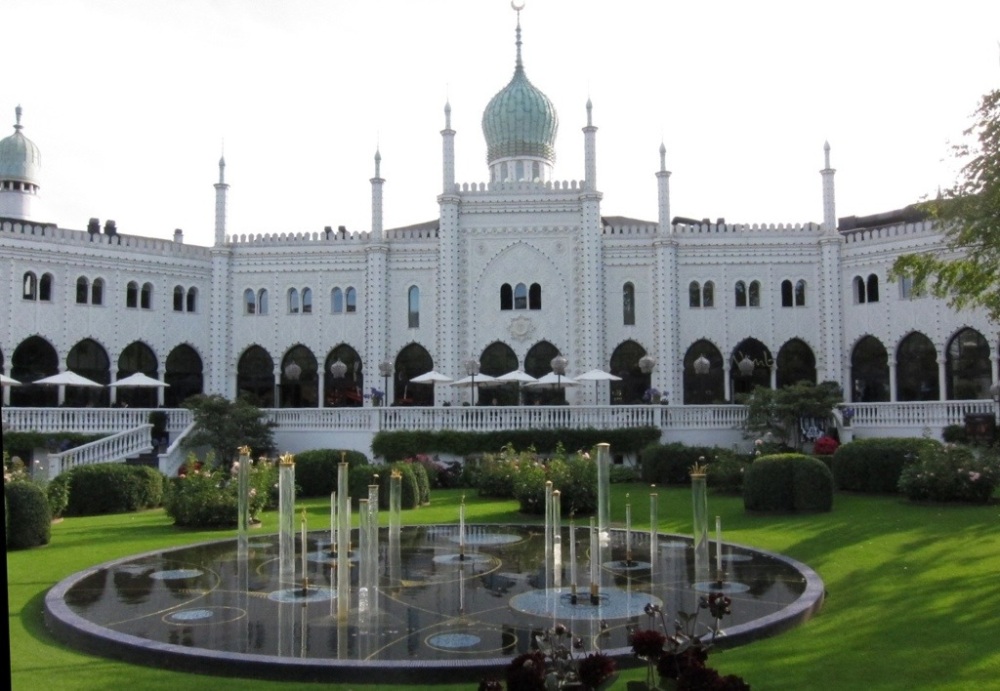 Wandering through the games, we saw some international favorites such as horse racing with little balls that you roll into holes to move your horse. I got Mom to play this! We both lost, though.

I played Skee Ball! Then I realized each game cost me 3 bucks and stopped playing that after two rounds! (Horse racing was only $1.50) Still, I’ve now played Skee Ball on two continents. Only five more to go!

We also took our only ride of the day – on the Flying Trunk ride. Mom seemed to remember that the ride was the inspiration for It’s A Small World so it felt compulsory. We rode in a giant trunk (yes you read that right) through a series of scenes from the Hans Christian Andersen stories. And they didn’t remind me of Disney – at all! And most egregiously, there was no insidious song that got stuck in my head. It sucked. This crappiness cost us 8 bucks each (Copenhagen is pricey).

I was disappointed and looked up the Disney connection – apparently It’s A Small World contains a picture of the Nimb Hotel, as his homage to Tivoli. So as it turns out the ride was a mistake on multiple levels.

Now I have to get the image of the Princess and the Pea out of my brain. Curses!

Tivoli Gardens is supposed to have some good restaurants, but all of the ones for which I found recommendations were closed. We tried a couple at random, but were ignored at the door, so finally went to a pizza place where we were mostly ignored at the table, instead.

We started with Prosecco, which was nice. In all honesty, however,I had ordered a Negroni from the menu, but the waiter (played by Rölf from Sound of Music) said they were missing an ingredient. Since I could see the bar, I know they weren’t, and suspect he didn’t know how to make it. Alas!

We had a plate of antipasti, which was surprisingly good. Mom let me have the anchovies all to myself, so I let her have the grilled artichoke. The plate also included fresh mozzarella, olive tapenade, pesto with Mediterranean pine nuts, bresaola, prosciutto, salami, basil, and capers.

We also had pizza with more prosciutto, tomatoes, and arugula. The pizza was surprisingly decent, with a thin crispy crust. Overall we were pleasantly satisfied with our dinner.

We eschewed dessert tonight. It was getting a bit chilly in the restaurant and we frankly didn’t want to wait any longer. Besides, I had hoped to stop for some theme park ice cream, but they were sadly closed so dessert will just have to wait.

The park was stunning as we wandered back out into the Copenhagen evening, with lights everywhere. The Nimb, in particular, was even more beautiful at night than it had been during the day.

Maybe that Disney guy wasn’t so stupid after all.