After getting checked in to the hotel last night, it was well past 11, so Mom and I went right to bed, getting up early for breakfast and conference.

The conference was great, with really good talks. Mostly. I must confess that after the long flight, however, that hours in a dark auditorium were a recipe for sleep. At least I didn’t snore … I think.

I picked up mom at the hotel and we walked through downtown Copenhagen, getting her oriented to the town, and then went to Aamann’s for dinner. Aamann’s is known for traditional Danish favors presented nontraditionally. Mom sometimes has strict rules about food, especially seafood, and I encouraged her to “trust the chef” in order to maximize her enjoyment.

We started with glasses of sparkling German Riesling. Dry, fruity, and fizzy, a great way to start dinner.

There were two breads. A “white” bread made in house, and a rye bread, also made in house. they were served with Danish butter and pork fat with crispy lard. The butter was fantastic, creamy, salty, and bright. The pork fat was like spreadable pork rinds – devilishly divine. The pork paired perfectly with the rye bread, whereas the butter was lost with this loaf. Conversely the pork overpowered the white bread, with the butter serving as the better pairing. Both combinations were inspired and not to be missed. I made mom confront her fear of pork fat, and she was in agreement.

Plates were small so we had three each. I started with dilled herring served with egg cream and aquavit granita. It was like pickled herring, but utterly fresh and clean. This is pickled herring in its ultimate presentation. Lovely.

Mom had Norwegian salmon smoked for 40 hours at 50 degrees C. This was the best smoked salmon. Ever. It was tender, with a gentle smoke, surprising after such a long time. We both were raving.

Next I had burnt leek soup with baked egg and crispy sourdough. The soup itself was heavy but delicious, and the egg somehow lightened it, as did the crispy sourdough. I’m having visions of another soup in my head and am inspired.

Mom had the sourdough toast with forest mushrooms. I am not a mushroom person and even I loved it. The umami mushroom flavor was outstanding. 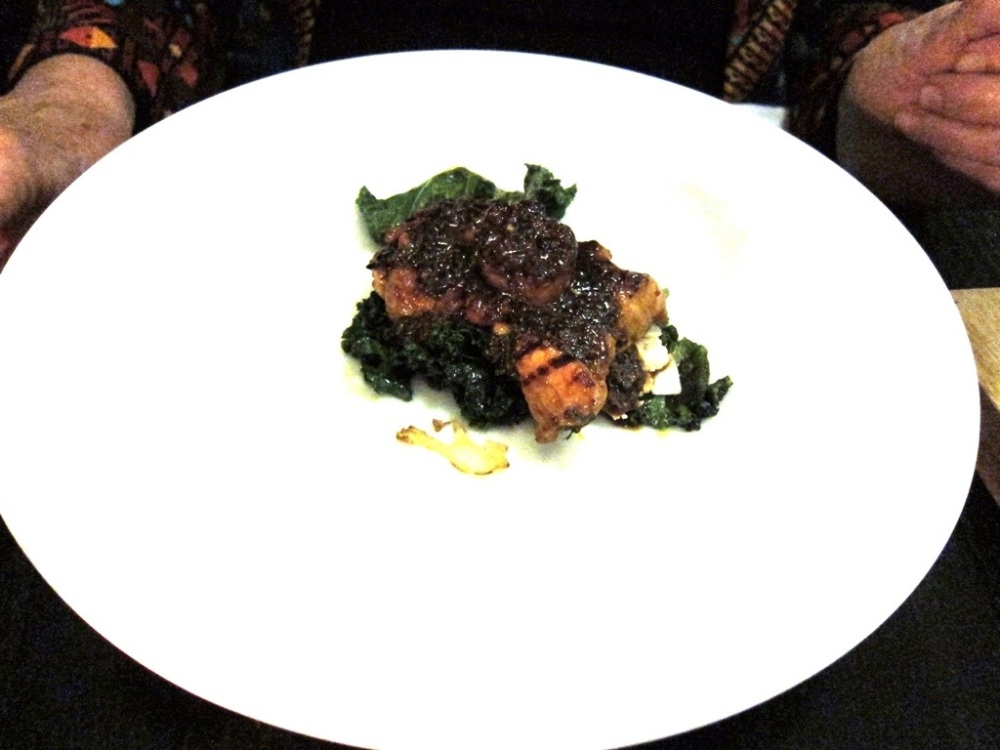 Mom at this point went out on a limb and had the pork neck with smoked pork marrow. I think she felt some trepidation about this dish at first, but clearly the fear melted away and she dove in. The pork was like a dish of barbecue, especially given the smoked marrow. There was nothing bad about this dish. It was perfect.

Finally we split dessert. The dessert was white chocolate mousse served with sorrel and celery sorbet. Tasted individually, the components were a bit boring, if not weird. The mousse was pedestrian. The sorbet was strange. It was off-putting. But when we tasted the dish in its entirety, mouse with sorbet, something magic happened. A balance was achieved and the dish became more than merely the sum of its parts.

Our meal at Aamann’s was stellar in every way, service included. If you ever come to Copenhagen, I highly recommend it – this is a restaurant you won’t regret visiting.

Now time for bed. More conference in the AM and I want to be awake.