I know one French word.

Merci. That’s it. That’s the extent of my French. I keep flying this goddamn French airline and when they ask what I want to eat, I say “Thank You.” Oh well ….

This flight is a disaster. It was supposed to leave at 22:35, but was delayed until 300 because of snow in Paris. Yet I still had to get to the airport on time for the official flight. Fortunately the airline representative moved my connection so I will make it to Florence in time.

The original plan was to arrive at CDG (why?!?!) at 11 and leave at 1. The new itinerary was arrival at 3 and departure at 6. Except, we didn’t even board until 320. And for some cursed reason we didn’t depart until 5. Which means arrival at 1720, which will be cutting it close for an 1825 departure considering the disaster that is CDG.

It was probably 6 am when they served us dinner on the plane. It started with a glass of …

Champagne. So much gone wrong and fixed so quickly. 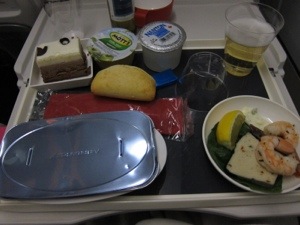 Then dinner. A fish terrine – is this the original processed food? I don’t know how I feel about it.

This is accompanied by the requisite bread, butter, and cheese. The Mott’s granny smith apple sauce is OK. Certainly better than their regular stuff, but I’m just not that into applesauce. The main is chicken with egg noodles a some unidentified sauce. Eh. It was ok. 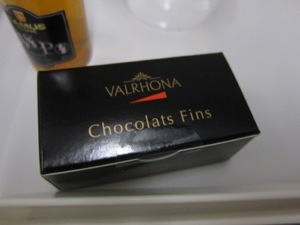 The dessert -triple chocolate cake – was the highlight, as was the surprise box of valhrona chocolate and the little bottle of cognac.

It was such a cute little bottle of cognac.

I will try to sleep now. I’m fairly certain the 5 am departure won’t affect the jet lag in the least.