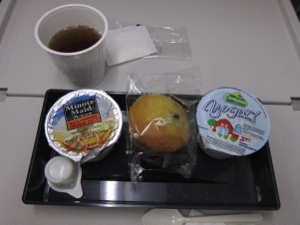 After a fitful sleep I woke to a breakfast of blueberry muffin, yogurt, and orange juice. The plane landed and we sat on the tarmac for an extra 30 minutes. Just because. I’ve had this happen before at CDG, and have decided it must be part of the normal French workflow that is designed to ensure that you miss your connection.

As we taxied to the terminal I paused to look at the snow that had caused so much disruption. There was an inch, perhaps two, but nothing that should have crippled their network. I decided the real problem was the French affinity for surrender.

Disembarking, I rushed across terminals to make my connection, but in truth needn’t have worried. The flight was late. First 1840, then 2040, then 2140. So I camped out in the lounge trying the food. 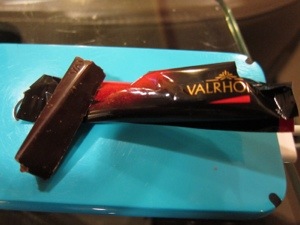 The Valrhona chocolates were entirely without suck

Then there were these: 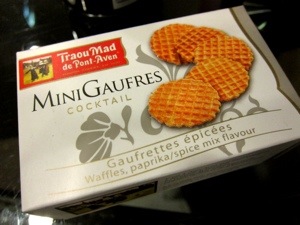 These were good. They were the opposite of suck. They really blew! I stole some on my way out the door.

Finally the call came and we had a gate.

We boarded and were off to Florence, where I found that my suitcase and I had parted ways.

The process for filing a missing luggage report was breathtakingly inefficient. It involved a horde of tired passengers huddled around a tiny counter staffed by two people who spent 20 minutes per bag and had no answers whatsoever. I found that shoving little old ladies out of the way expedited things, and so I fastidiously ignored any compulsion against doing so. Perhaps the wine I drank on the plane was to blame? Or perhaps it was simply a Darwinian drive.

The woman at the counter is not optimistic that I will receive my luggage before departing from Florence. But I am assigned a redress number and am relieved, at long last, to escape the airport. Numb and worn, I am whisked away into the Florentine night by a maniacal taxi driver.

So I finally arrived at my hotel 10 hours late, at 1 am local time, with the conference starting in just a few hours. And in the end, for all my bitching and moaning, the exhaustion and the headaches, One Thing remains. This One Thing renders the lost luggage meaningless, because things like clothes and deodorant can be replaced. This One Thing obviates all the rest and makes it OK.

I will wake up in the morning in Italy.