I was up bright and early this morning, finishing last nights post, and in general getting ready. I tried to be bright and chipper for G, but I really don’t think it worked. While I am not much of a morning person, she is really really not a morning person. Perhaps she will be more receptive to my cheeriness tomorrow.

We headed out and took the overly crowded morning metro to a stop near the Vatican and went to the Vatican Museums, grabbing a croissant on the way. We looked pityingly at the hordes of people who didn’t buy tickets online, and jaunted quickly inside. But to where? The Vatican Museums are more than just the Sistine Chapel – rather they are a complex of museums (hence the name), allmost all of which eventually lead to the Sistine Chapel. One exception is the Vatican garage, which is where D and I went last year.

We started in the Egyptian wing, where there were some impressively ancient artifacts, some over 4000 years old. There were also numerous statues of the Egyptian gods (Look – there’s Anubis! Hi Anubis!). It was a really nice collection, but the collection in Torino is much better.

From there we visited Ancient Greece and Rome. We stopped with all the crowds to see the Laocoön, but frankly were awed even by many of the less-recognized pieces. We discussed that there are some sculptures that clearly stand out, whereas others are equally as good as other more famous works. It strikes us both that some of these pieces likely became the subject of career-making study and thus gained a certain degree of importance. In another parallel universe some of them would clearly remain important, whereas others would have changed.

Some pieces in particular grabbed our attention, such as the muses. G and T, many years ago, really were very much into the muses, so she was able to recognize them right off the bat. 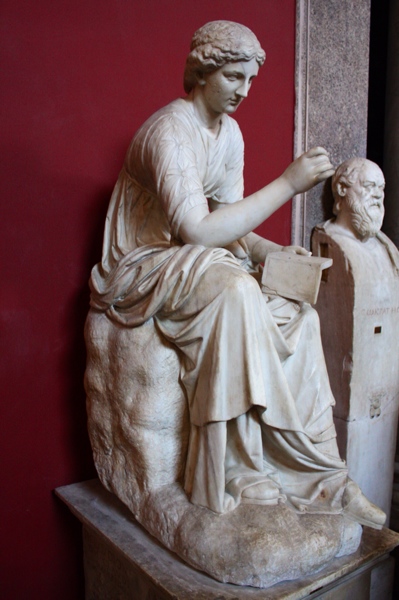 And there’s Thalia, the muse of comedy!

We continued through the museum complex, gradually getting more and more jaded. “Look. Random old Roman sculpture.” It’s just impossible not to be overwhelmed at some point. We both looked forward to the Etruscan wing, but were a bit disappointed by the amount of Greek pottery there.

We stopped for lunch around noon (about 2-3 hours in) at the museum cafe. Over the wall of the courtyard we could see the dome of St. Peter’s. Lunch was decent, and essential as it gave us a chance to take a break before diving back into the museums and toward the immense crowd that would be eventually encountered on the way to the Sistine Chapel.

It being unavoidable, we did press ourselves back into the mass of people into the museum, starting with the room of disembodied marble heads. Then the real push to the chapel began. To reach it, you pass through countless beautiful rooms and halls, but nobody really gives much attention to them. In any other setting any single room would have left us standing, agape, and staring. But here we just couldn’t process any more. And so we continued forward, wondering how we ended up in the wing of contemporary art. Or were these the Borgia apartments? Perhaps both? The signage was lacking.

Finally we made it to the Sistine Chapel. You’ve all seen pictures. It’s stunning, but the chapel was packed with visitors, shoulder to shoulder, so we tarried only briefly before moving on.

I was disappointed that we weren’t able to exit to St. Peter’s directly, but were dumped back out on the streets. Undaunted we wended our way around the walls of Vatican City only to reach a long line under the merciless Roman sun. Now we were daunted. Just looking into the square, where the mass of people stood, the entire area bleached white and unshaded, we were exhausted. We paused to look at the clock and regroup.

Neither of us wanted to endure the agony that the wait would entail. Thus we turned our back to St Peters and headed toward Castel Sant’Angelo, where I could replace my Roma Pass (a visitor’s pass that wasn’t working), and perhaps move into the streets of central Rome where the buildings could at least offer shade. The latter didn’t really happen – instead we sat and had much-needed slushies on the castle grounds. They were good slushies.

After this break we were mostly recovered and took a taxi to the Galleria Borghese. G was terrified by the nature of Italian driving, whereas I was unaware that it was even an issue. I clearly have been desensitized.

The collection at the Borghese is spectacular, but the pieces that have burned themselves into my memory are the works of Bernini. Every time we walked into a room with a Bernini, there was a palpable pause. His works are active, not static. They stand apart from other statues, which just look meager by comparison. 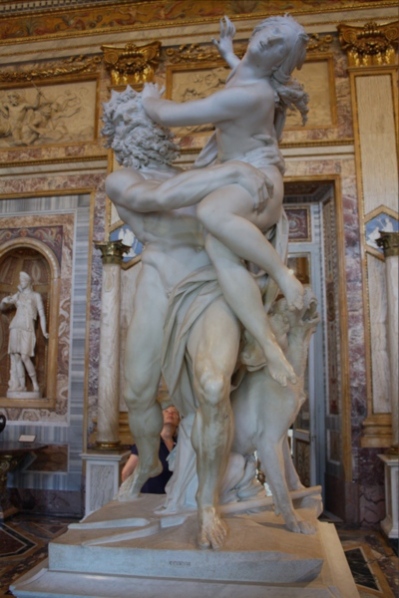 They are simply stunning. Look at the concentration on David’s face. 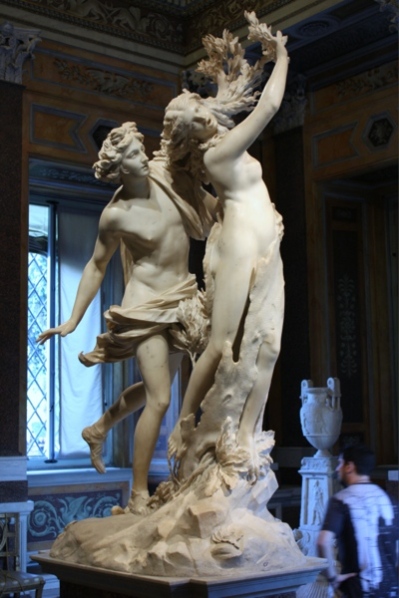 And they are delicate. 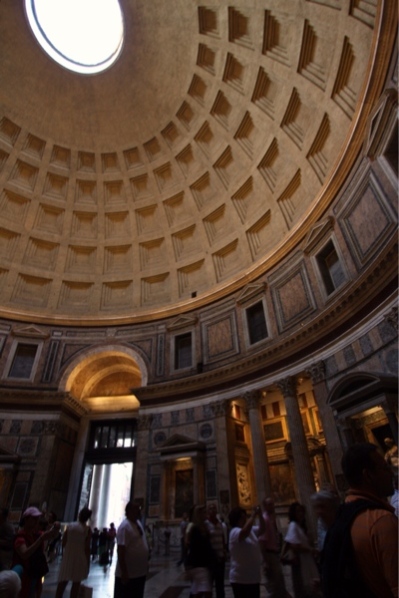 As afternoon moved into evening, we had another taxi ride, this time to the Pantheon. It was apparently still terrifying, but less so than the earlier ride. I had to ask about this, as I no longer have perspective. There we visited the monument and later had dinner.

Finally our day ended with gelato, sitting on the Piazza Rotunda, photobombing the people sitting in front of us, resting our feet, and generally decompressing from the very full day.