Yup … I’m not kidding about this one. They love him here. EVERYBODY wants to have their picture taken with him. It all started at the temple this morning. I was looking at something, and turned around to find him taking a picture with people I didn’t know. That was the start. Strangers would just walk up to him asking to have their pictures taken. According to the guide at the temple, “He is white, he is tall, and he is blonde. He is attractive,” so that’s the reason. It was hilarious. 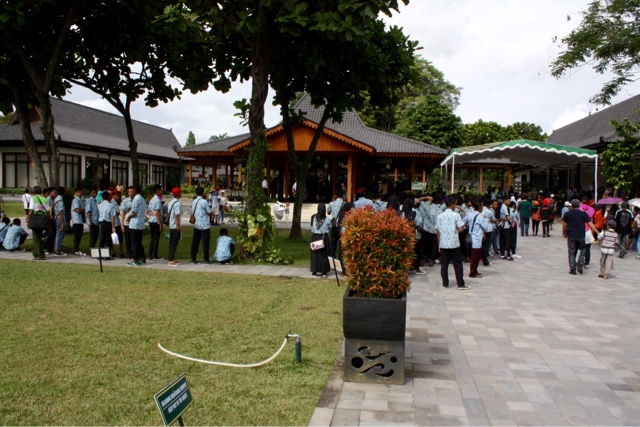 But I’m getting ahead of myself. This morning we were met at the hotel by a driver who drove us out to Borobudur, a Buddhist temple that dates to the 9th century. There was a long line at the entrance … but we went to the building on the left. Way on the left. The building without a line – that’s the entrance for foreigners. It’s almost desolate in there. After we paid and entered we were offered the option of a guide for 100,000 IDR. This might sound like a lot (and for locals I think it is) but it’s $8 US, so we went for it.

The temple, a Unesco World Heritage Site, was built in the 9th century when Java was Buddhist and Hindu. It was destroyed by an earthquake in the 11th century (Wikipedia disagrees with the guide, here) and was abandoned. It was discovered again in the 19th century and has been rebuilt as much as possible. Some of the building blocks were scavenged by locals. 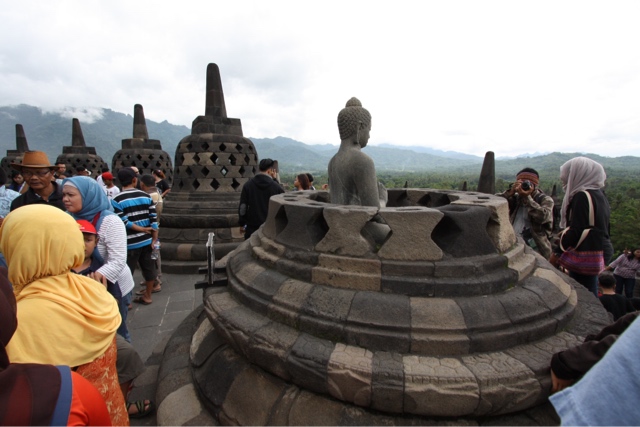 And the Dutch gave away some of the Buddha statues.

According to one legend it was built in one day by a giant, who then laid down to sleep and never got up again. Do you see the giant laying there?

It is arranged in 10 levels, with the 10th level being a large stupa, or bell. My understanding is that the top level is a sort of perfection, and that level is unreachable.

There are stupas arranged throughout the upper levels of the temple, containing Buddha statues in 6 different poses.

We climbed to the 9th level of the temple. There were a lot of local tourists here – this being due to the New Years Holiday – which hampered our visit a bit. Still it is a remarkable structure. Very harmonious. It is apparently quite beautiful at sunrise, and I don’t doubt this at all. I can only imagine what it must be in the solitary morning mists, as the glow of the morning and the first light of day break across the surrounding mountains.

From there we ran the gauntlet of vendors trying to sell us souvenirs on the way out. There really was nothing we wanted or needed, but that didn’t stop them. Apparently the most direct translation of the word “no” is “perhaps, please tell me more.” They were far more persistent than any other vendors I have experienced elsewhere. Even the guide was annoyed.

Next stop was Prambanan. The drive from one temple to another took us past innumerable paddy fields and through absolutely stunning Indonesian countryside.

Prambanan is a Hindu temple complex that was built at approximately the same time as Borobudur. Being more vertically oriented, it was more completely destroyed in the same earthquake. They are attempting to rebuild it, but given the scavenging of stones that took place over the centuries, this is even more of a challenge than was rebuilding Borobudur. 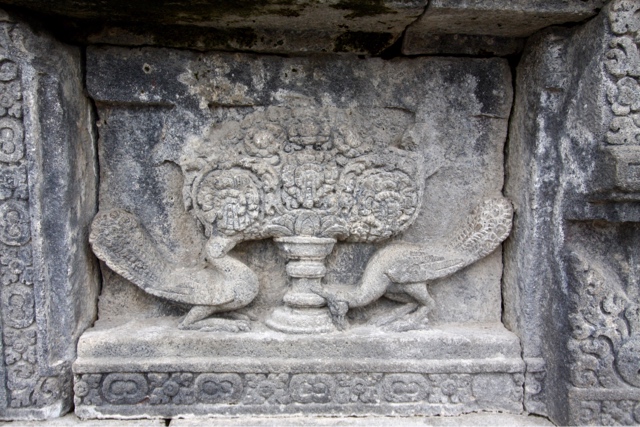 We hired another guide who explained the imagery of the numerous reliefs across the temples.

Prambanan is spectacular. We were permitted to climb and enter the temples of Siva, Vishnu, and Brahma.

To look upon the statues of the Hindu gods.

And we gazed north to Mount Merapi, 4 km away, that once covered this area in ash.

It isn’t as touristed as its counterpart, and consequently doesn’t have the money, so it also isn’t quite as clean, and the recovery is more of a struggle. Still it is humbling in its size and in its beauty. Thoughtful, we finally took one last look into another time in Javanese history and left the compound in search of our driver for the journey back to the chaos of modern day Yogyakarta.