I think previously I had stated that this isn’t a city for wandering. I was partially wrong. I had based that experience on the neighborhood just east of our hotel. We definitely don’t want to wander there. Also, as we have been here our eyes have adjusted to what we are seeing and we are better able to judge better areas from worse. I’m not necessarily saying we are experts, but we can now look at a neighborhood and make an assessment. That really wasn’t possible the first day. Now I’m at a point where I feel freer to go places – not random wandering perhaps, but I am much more liberated.

To the west and north of our hotel is a vibrant neighborhood with plenty of shops, restaurants, and hotels (ie tourists). This is where we ate last night. When I made the prior statement we hadn’t been there in the light of day. Even yesterday, because it was the holiday, things were misleading. There weren’t many people out. Today, as we zoomed by on our way to the sultan’s palace, the vigor of the area was clear. Unfortunately, the way our schedule worked out I don’t know if we would have had much opportunity to explore this neighborhood. Perhaps I will have to return *sigh*

Ah the sultan’s palace. We chose not to get a guide here. I still don’t know if this was a good decision or a bad one. On the one hand, there really were no signs, and a guide might have helped. On the other hand, our overall impression was that we probably would have been bored anyway. 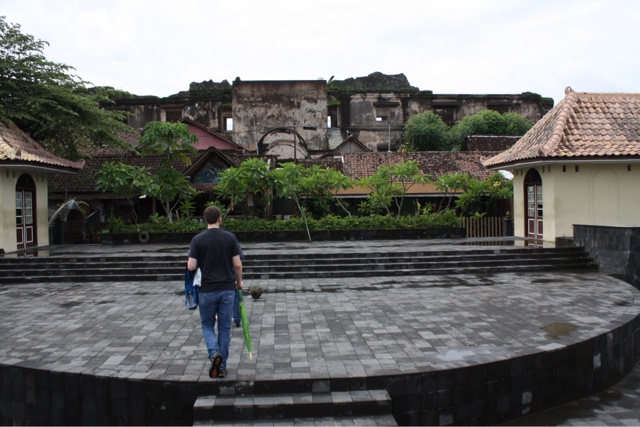 While in the area we made a brief foray over to the water palace. It’s pretty much been destroyed, so not much to see here, but it makes the guidebooks.

We are being careful in this area. Everybody wants to help us out. My general response to strangers who offer unsolicited enthusiastic help to me is to say, “no.” I’m working with the assumption that they want something, and I’ll find out in a bad way if I’m not careful. I know that approach can sound a bit xenophobic, but it has worked for me so far.

We walked from the water palace to the south end of Malioboro street, where the market was. This end of the street is very different from what we saw on the first night. Much more interesting, and less local with lots of touristy things. And the central area of Jogja is actually really nice. Unfortunately we can’t tarry here because we have lunch reservations and a plane to catch.

Lunch is at Kesuma, a traditional Javanese restaurant near our hotel. It is very highly rated, and the reasons are clear. 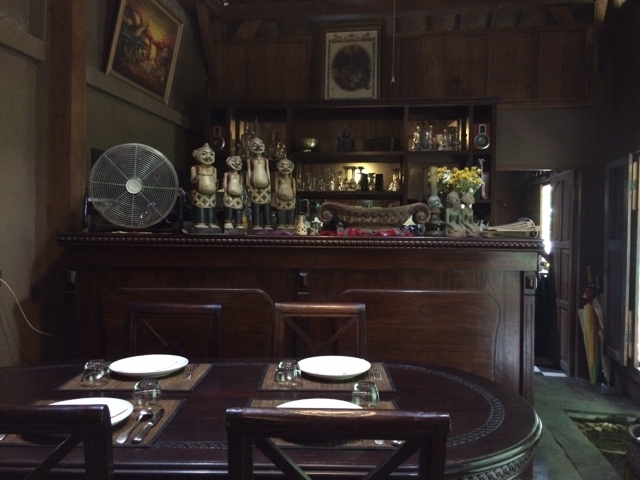 The restaurant is small, intimate, and absolutely lovely, although sporting a good population of mosquitos. And the service is impeccable, including bug spray when we first sat down at the table.

We started with tofu cakes. Look at the itty bitty egg in the middle of the left-most cake. They love boiled eggs here (but boil the hell out of them).

I had today’s special: bebek goreng. That’s fried duck, to you and me. And OH MY GOD it was good. I mean seriously good. I want more already, and I will want more for many years. Every once in a while I have a dish and I reflect on it and remember it many years later. This is one of those dishes.

Dessert was fried bananas. The would have rated, I’m sure, had I not had that bebek goreng.

From there we headed off to the airport for our flights to a beach resort on the island of Lombok. 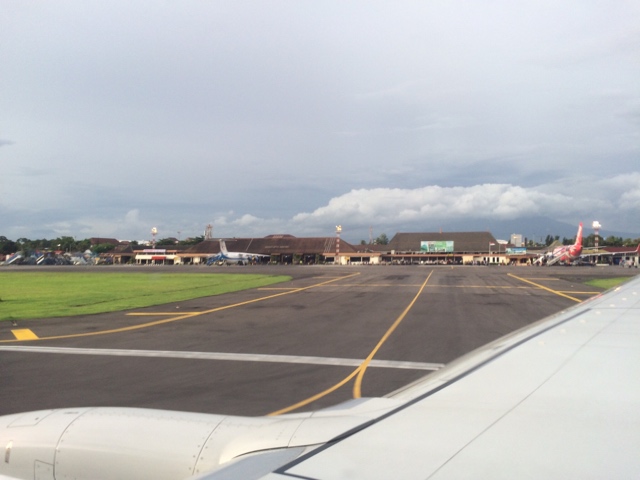 Here is a picture of the Jogja airport. There is a single landing strip, no taxi-way (so planes land, takeoff, and taxi all on the same runway), and yet there are two terminals. The one on the right is the international terminal. The one on the left is for domestic flights. There are 4 gates in that terminal. 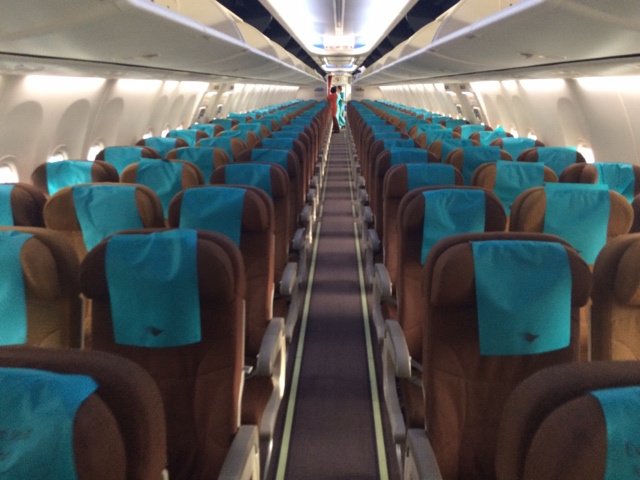 Our flight left late, of course. *sigh* Here is the Garuda interior. Actually it doesn’t seem so bad the second time around. And the service on this airline is really spectacular – very efficient in all phases of the flight, from loading/unloading, to beverage service, to snack service.

After a 1-hour flight (yes there was snack service on a 1-hour flight – and not just pretzels, but a box with water, a sausage roll, and dessert) we had a layover in Bali on our way to Lombok. Bali has a very modern very clean airport.

The next flight was on a small turboprop. It was scheduled as a 30 minute flight but also left late and took longer than expected due to weather. It wasn’t the smoothest flight, so we didn’t get our snack service (yup!) until walking off of the aircraft, when we were all handed a snack box. And since it was raining, they loaned us all umbrellas to walk from the plane to the terminal. (See – told you Garuda has great service!)

We grabbed our bags, and the driver from the resort was waiting for us. As he helped us into the van, he handed us each a moist washcloth and a bottle of water for the 1.5 hour drive. He also gave us an iPad so we could look over things like menus. Immediately, it was clear that the next few days are going to be very different for me.

At midnight, after checking into our beach-front room, we went to the restaurant and had a late dinner, eating to the rhythm of the surf crashing against the beach.