Another conference day. Good set of morning talks. One of my takehome points: eat yogurt or drink kefir. Maybe both.

My hotel isn’t near the conference center. It’s about 20 minutes away by U-Bahn (subway), line U2. Or I should say it was that far away. This morning when we got to Potsdamer Platz, about halfway, suddenly everybody else in the car got up and left. I first thought something was wrong, but then noted somebody still sitting in an otherwise empty car next to me. That was reassuring, because two of us couldn’t be wrong, this must just be a popular stop. After a brief minute, I too got up and left my car, finding “footprints” labeled U2 stuck to the ground. Everybody was following the course of these steps.

Meanwhile, the doors had closed on my counterpart in the next car and a severe German woman was pounding on the train door yelling at her, in brutal rhythms to, “get out, get out now!”

So I followed the footsteps on the ground, because nothing bad ever happened when a German kicked somebody off of a train, and found myself in Potsdamer Platz.This was a town square that had been destroyed entirely during the second World War, and was bisected by the Berlin Wall during the Cold War. Now the area is booming again

On the ground there are bricks inlaid where the wall once split this city. I stood there, staring toward the West, and the space before me was stark. 30 year ago, a few steps forward wouldn’t have been possible, and to go there would have meant certain death.

Nonetheless I continued forward, climbed onto my bus with the other riders, and after a 10 minute drive we had gone a mere few blocks where we re-boarded the U-Bahn and continued with our trip. Overall, this detour doubled the length of my morning commute. 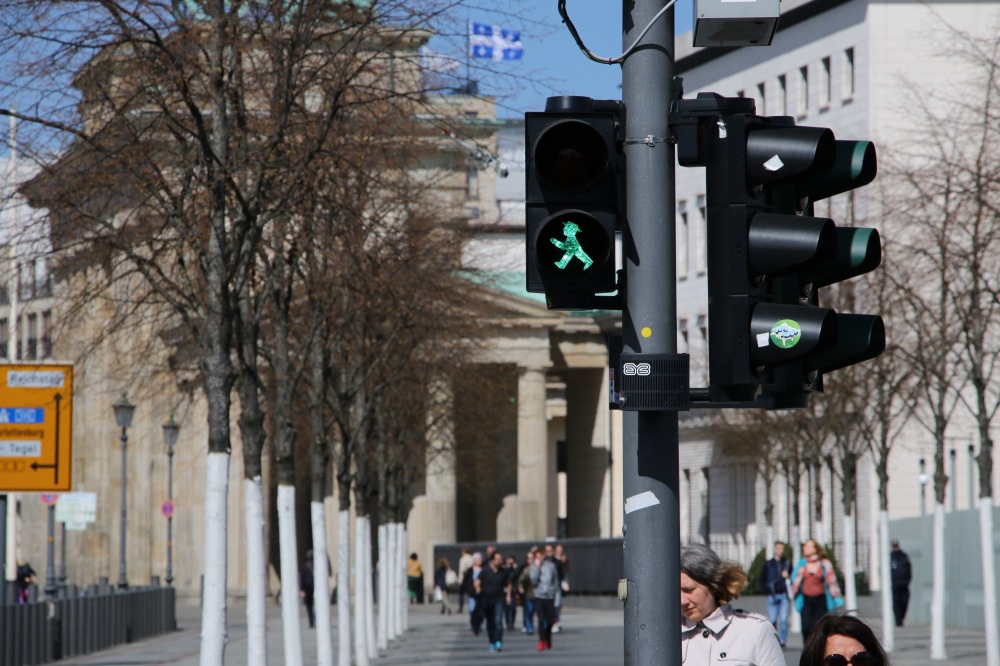 In the afternoon we left the conference early to explore some of central Berlin. I was confronted by multiple closed rail lines, and had to walk part of the trip. I love that the “walk” lights here show a little man with a hat. 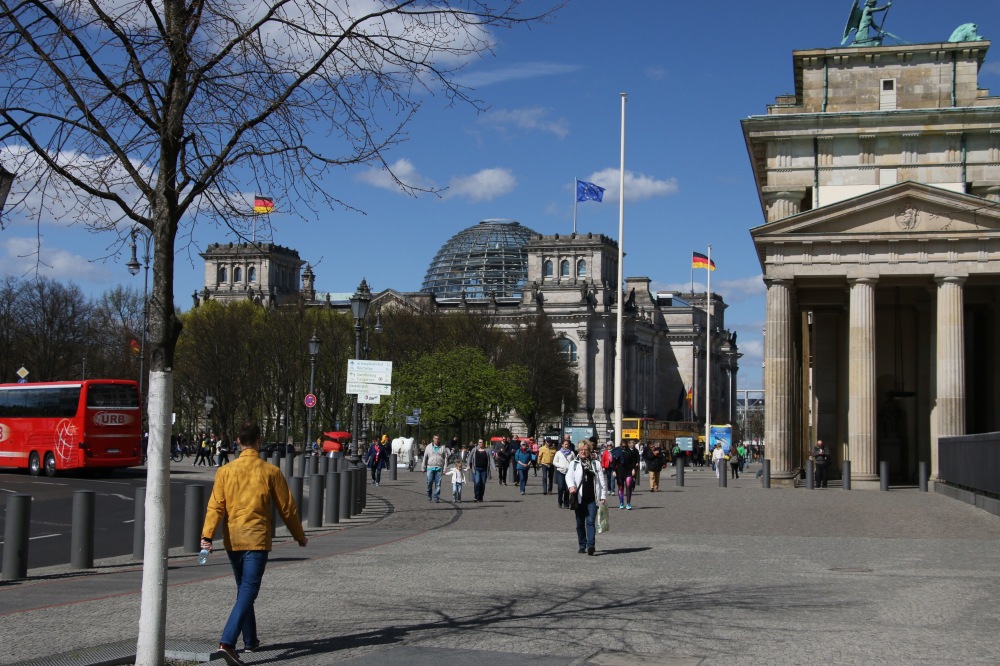 Approaching my goal, the Reichstag loomed ahead on the left. 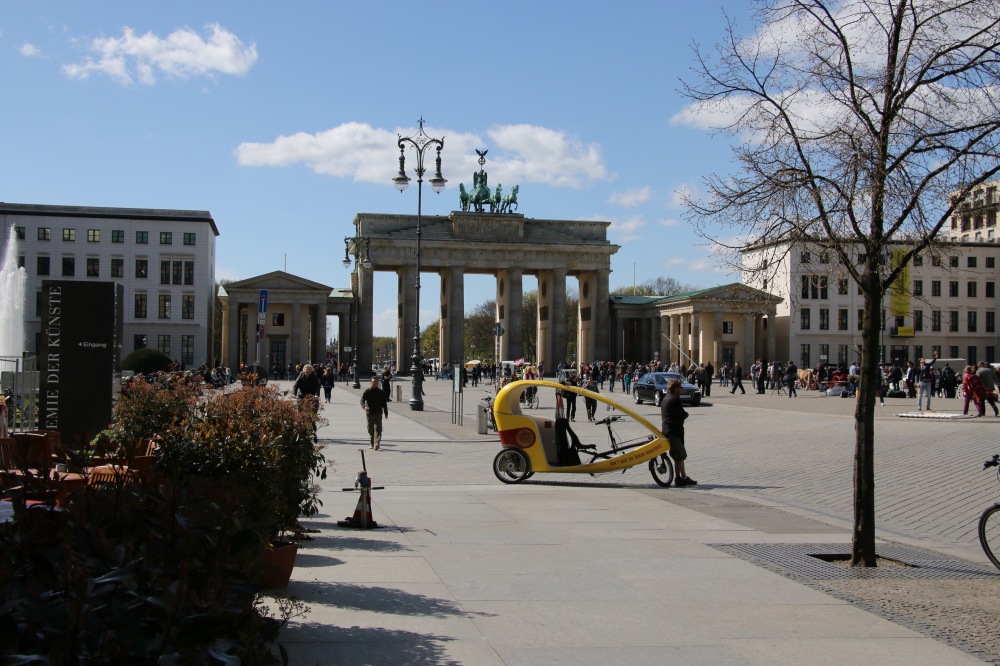 Eventually I met S and her brother at the base of the Brandenburg Gate, on Pariser Platz. The gate was commissioned as a sign of peace, but later became a symbol of Nazi power, and the Platz was the site of many rallies during the Nazi era.

They had rented bicycles from their hotel. We found a local stand to get a bicycle for me, but it was closed for the afternoon. Just as we were about to leave an American woman from Santa Clara arrived to return her bicycle. We asked her if I could take it and she acquiesced. We were on our way.

We headed out toward the East, leaving the gate at our back. We turned right on Friedrichstraße. The traffic crowded us intensely, but we continued forward, to the south. I yelled ahead to my compatriots, as we passed a brick line, that we had crossed over the wall, and suddenly almost without knowing it, we had passed beyond Checkpoint Charlie.

We would have to come back.

We veered to the southeast, continuing forward. Eventually we stopped. We were at the Berlin Jewish Museum.

There are three main hallways here, representing the fates of Berlin’s Jews. The first leads to the Holocaust, the next leads to Exile, and the last leads to Continuity, which is the largest portion of the museum.

The Garden of Exile is outside, a series of columns at odd angles to the Earth. It reflects the fate of those who departed. It is meant to be a bit disorienting and nauseating. There are trees planted at the tops of the columns, and it is open air. There is some hope.

And then we continue to the Tower of Continuity, which tells a longer tale. The tale of Jews going much back farther – going back thousands of years. But we don’t start at the beginning… 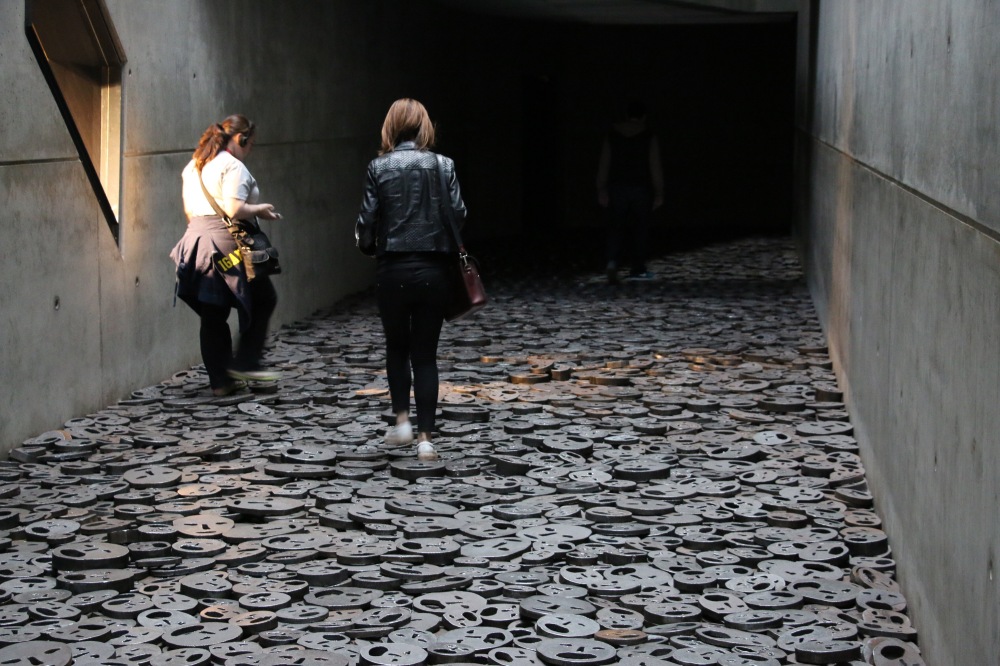 The architect has designed this part of the museum with a series of “voids.” Areas that are empty, some of which can’t be reached. First we go to the Memory Void, and the work Shakalet (Fallen Leaves). A room of iron faces. We walk on them and they clank loudly. It is wrong. It is oh so wrong.

Now I am angry. Not lound angry, but quiet angry. Seething. I have struggled to write this post for two days now, to summarize what I am feeling in this museum and in this city.

I look at the faces and wonder, “Who are the Germans?” And I am left thinking that they are defined by their history. I struggle to remember a good German history. Nothing comes to mind. Three major events are left. The Holocaust and World War II. World War I. The German Sack of Rome. Were they good between? Perhaps, but it is now lost.

A quote floats back to me. “How do you destroy a people? You take away their history.” This was said in reference to Africans brought as slaves to the New World, but it seems apropos here. The Germans in World War II systematically killed 6 million Jews, among a total of 11 million people.

The German hands are stained with 55 million liters of human blood.

I am considering that there are two ways to destroy a people’s history. The first is to take it away. Re-write it out of the history books so that it is forgotten. The second is to blot it out. Perform an act of such heinous nature, that all else is rendered meaningless and forgotten.

In their effort to utterly annihilate the Jews, have the Germans created such a stain that they have destroyed themselves? Have they, through the Holocaust, rendered the millennia of their history inconsequential? It would be a fitting irony.

I still can remember nothing good about German history that hasn’t been tainted. The Brandenburg Gate was once an emblem of peace, but during the War, it was bedecked in the Nazi Flag.

How does one wash out the stain of 55 million liters of blood? Perhaps, at some point, you can’t. I just don’t know.

Back in the museum we are overwhelmed. We briefly look at some of the histories, but eventually have to leave.

We find our way back to Checkpoint Charlie, pausing only briefly.

And we find the Holocaust Memorial before going our separate ways.

My trip takes me through the East, where I finally disembark from the U-Bahn at my ghost station.

What are the things we should see here? Things like the Brandenburg Gate, the Reichstag, the Berlin Wall. These are must-sees. None of them are uplifting. They all represent humanity at its worst. And they all represent Germany.

This city is morbid.