Last night, after dinner, I missed a step. My left foot moved backwards into open air, and my footing was gone. I didn’t fall, but my left calf took an injury of some sort. Pulled muscle? Torn muscle? I don’t know but it feels like an unending charlie horse.

So after this happened, at a pain level of 5-6 on the standard pain scale, I limped back to the subway, and eventually to my hotel. On the way, I emailed D. He will be arriving on Saturday, and I learned today that ibuprofen isn’t available over the counter here. I asked him to bring a lot, because I didn’t bring more than a few days’ supply. I think I’m going to need it.

Back at the hotel, I dosed myself heavily with the ibuprofen and went to bed. With the pain in my calf, and the things I had seen earlier in the day, I slept fitfully, woke feeling ill, took more ibuprofen, and slept yet more.

I eventually dragged myself out of bed and to the conference. The pain was worse this morning than it had been last night, and navigating the U-Bahn detour was more difficult given that I have to climb a lot of steps on a gimpy leg.

Oh – there’s the U-Bahn stop near the conference.

The talks were pretty good, and S and I stayed until the last talk of the day. We headed back to her hotel and spoke for a time until her brother returned, and finally headed out. The target was KaDeWe, a few blocks away.

KaDeWe is the second largest department store in Europe (only Harrod’s is larger). Among other things they are known for a very large food court. We rode the escalators ever upward, finally reaching the 6th floor, where they offer food as far as the eye can see. It really is spectacular. They offer both fresh and prepared food. I could pass a lot of time here. But we were on a mission.

Unfortunately, it was after 8, and because they close at 9 most stations wouldn’t serve us. S ordered some food to go, but it didn’t really speak to me. In any case, it was getting late, so after checking out I took my leave and headed back to my hotel. My leg was OK at the moment, the mobility and pain having both improved wth medication and use, but I was still limping.

As I approached the subway station, I suddenly found something that spoke to me. It glowed like a beacon in the night from a little stand at the side of the road. I placed an order and the man next to me made a comment about Americans to the proprietor. It was in German, so it could have been anything. I didn’t care much. I just wanted my food. 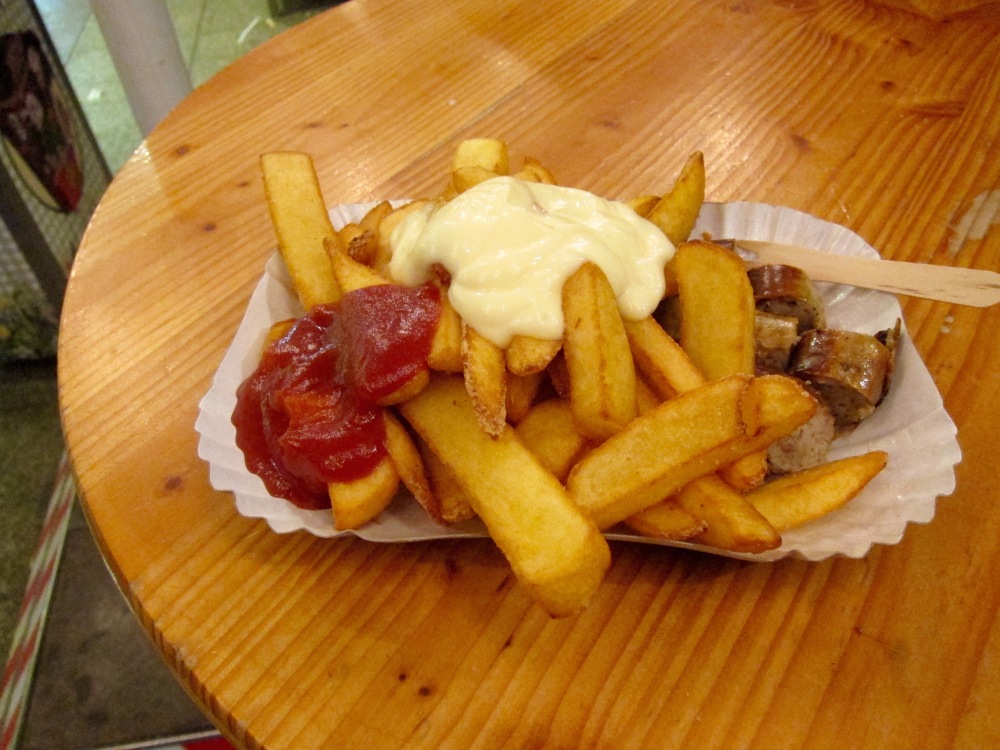 I had bratwurst with fries. I needed that.

And I needed the sleep I had not long after.