Leg update. Gradually improving, but I have visible bruising on the skin of my calf and foot. I’m fairly certain something tore and bled, and now the blood is breaking down and pooling. Strength feels good, so it really just needs to recover. Now onto other issues … 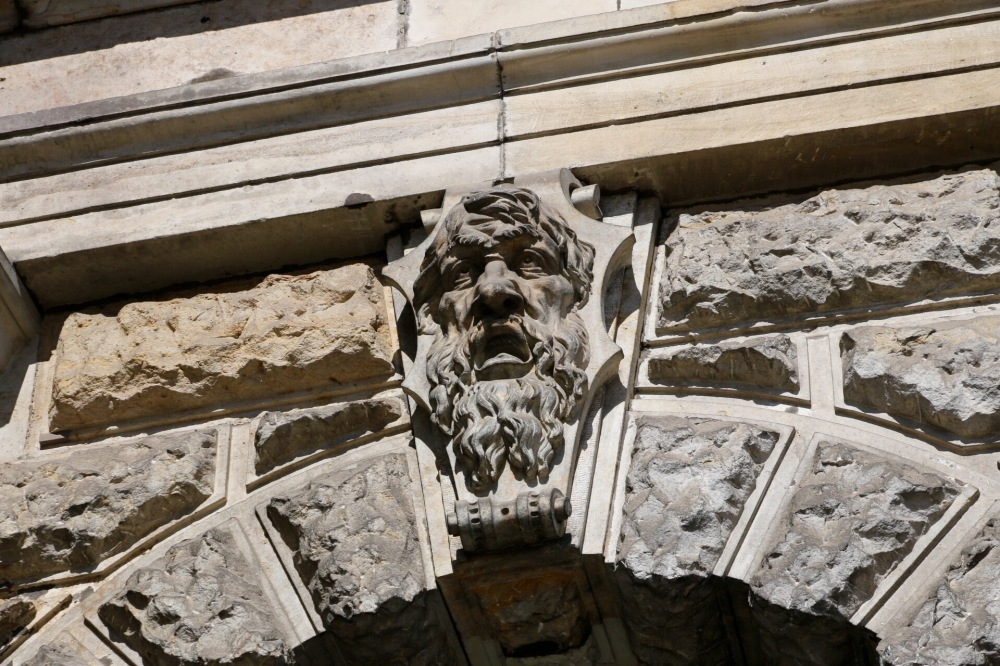 We are leaving Dresden today, and I have mixed feelings about this. Dresden is intimate, opulent, and not overrun with tourists. Our time here was brief and we have left far too much on the table, I think. On the other hand the town is small, and there isn’t a great deal to do here, albeit certainly more than we have done so far. Still, time is limited and we have other plans.

Before leaving town, we decide to see at least one of the museums closed to us yesterday, so we went to the Zwinger. There was some debate on this, as the other option was to visit the opera house, but the former seemed a better choice, as it is known to feature works from some well-known artists. 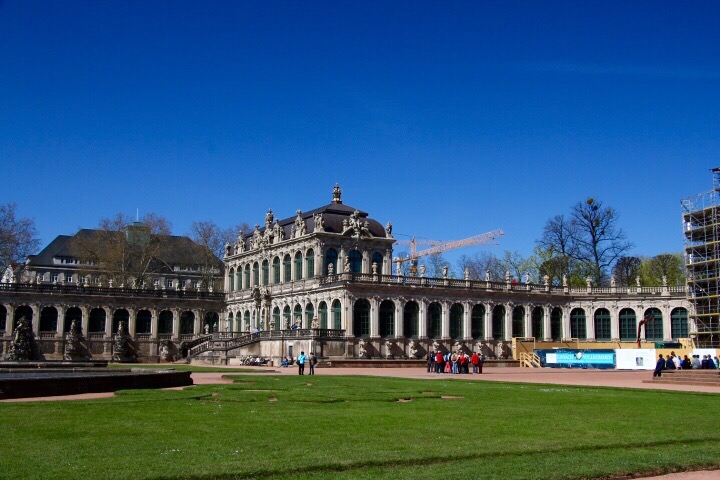 The Zwinger was built as a party palace for the royal family, but now houses 3 museums – the porcelain museum, the museum of math and physics, and the museum of old masters. There will also be an armory at some point, but it is not yet open. 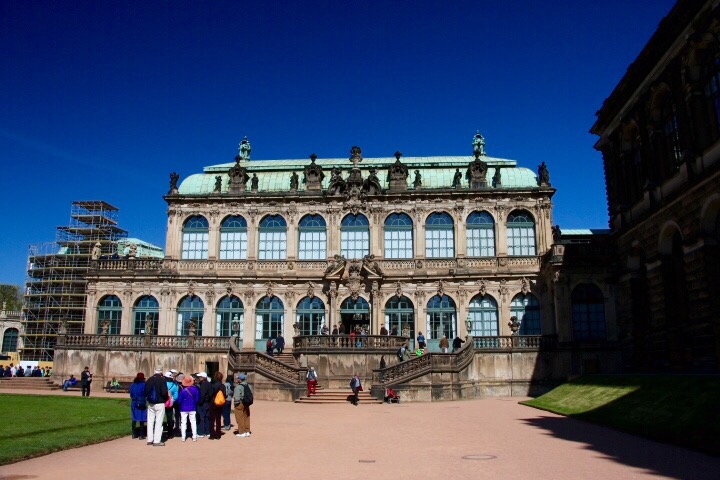 Walking into the central courtyard of the building, we inspected the richness around us, trying to take in all that we were seeing. The use of glass and stone and iron and copper here is truly spectacular. I can only imagine what it must have been like during one of the grand galas that filled this space. 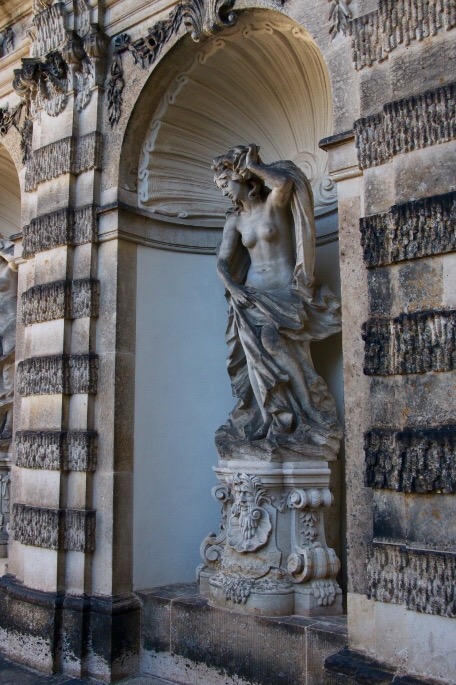 As we looked around us, we were also trying to discern how to actually enter the museum. Signage was lacking, or at the least very minimalistic. Finally, we found the entrance to the math and physics museum. Once we identified the first entrance, it became clear that the building itself had distracted us, and the entranceways were quite obvious. 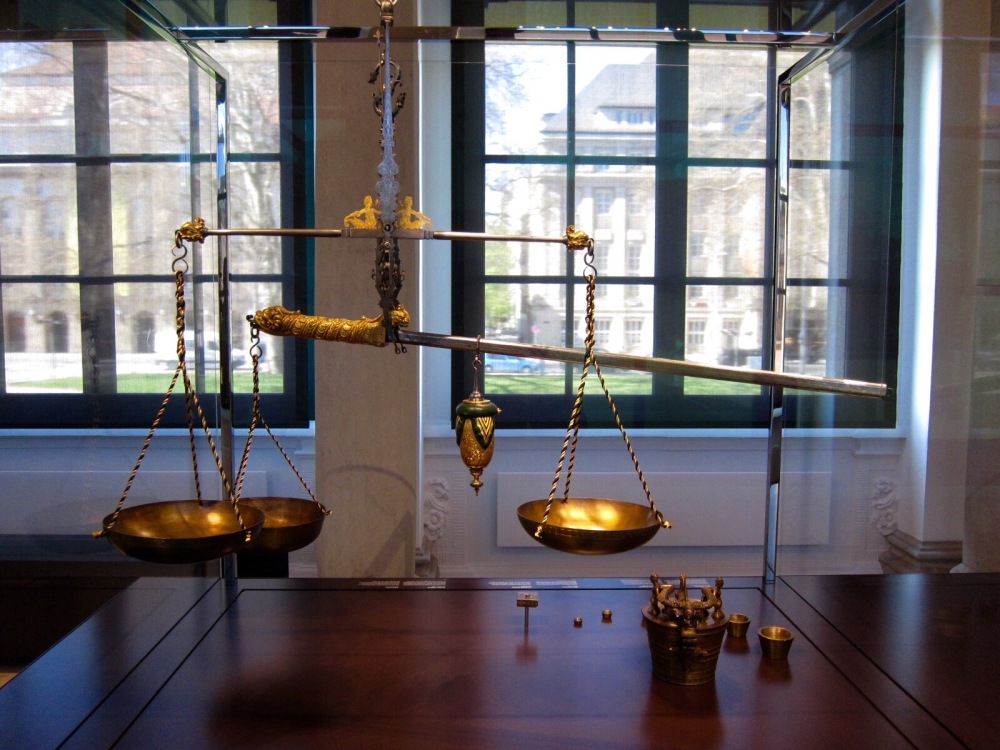 The first floor of the math and physics museum consisted of clocks, globes, and other measuring equipment which were vaguely interesting, but not stunning. The Germans just seem to have a way of taking something simple and making it far too complex. 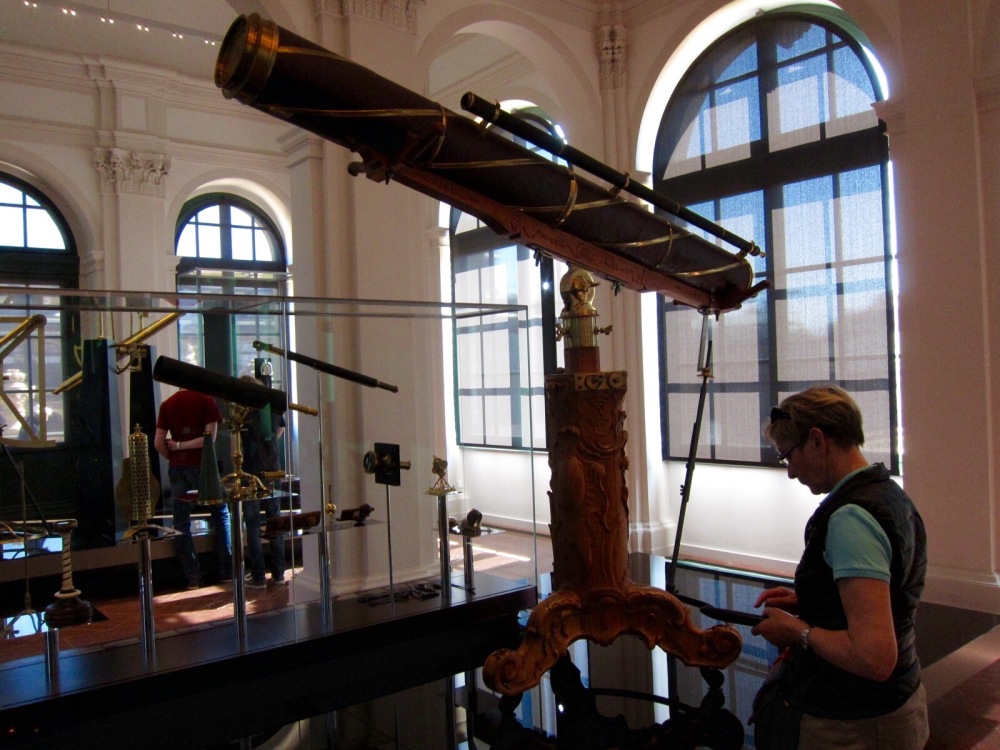 The telescopes were more interesting. 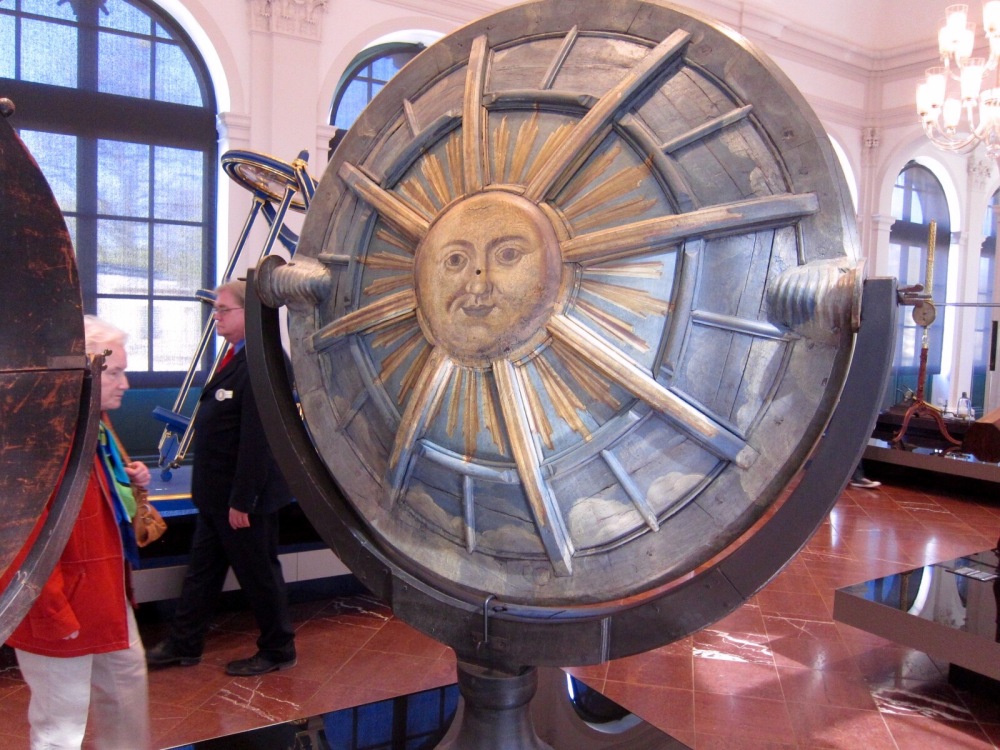 Most interesting were the lenses and parabolas designed to focus sunlight and burn things (this is the back of one).

Leaving this collection, we both agreed that we wanted absolutely nothing to do with the porcelain museum. Conversely, we were both looking forward to the old masters collection. They asked us not to take pictures in this museum, which I decided to respect today, so I will have to offer up some general impressions. First, the organization and lighting in the museum are suboptimal. There are numerous works that can’t be viewed simply because of the glare from the lights. Of the works themselves: They have too many that are OK but not spectacular, and the works by major artists are generally not their best works. Even so, there were a few works by Rembrandt (Saskia with a Red Flower and The Bittern Hunter are two examples) that truly were breathtaking, despite the fact that we both felt that they would benefit from a good cleaning. Finally there were a very few works by artists unknown to either of us that really grabbed our attention, including one painting of an elderly woman with deeply cragged cheeks and luminous eyes. This could almost have passed for a photograph to a cursory eye.

So was it worth the visit? Absolutely. I probably wouldn’t go to Dresden just for this museum, but I would go to Dresden again, and if I return I would certainly consider another visit to the Zwinger.

We returned to our hotel, collected our things, and were on the road. We parsed the conflicting instructions of our Nav units, sometimes trusting the iPhone, sometimes the Audi. Mostly, they were in agreement, and we made it to the Autobahn without trouble. The miles coasted by rapidly, with the car rarely dropping below 100 mph. Windmills dot the German countryside, the slow sweep of their blades inspiring much discussion. Why are some moving and others not? How do they get them started? And notably, the Germans are building more, having sworn off nuclear energy in the wake of the Fukushima disaster.

We moved south and west from Dresden, finding trees that were gradually coming into fuller bloom. The architecture was gradually changing as well, becoming more traditional as we moved out of the formerly communist regions and into Bavaria. And traffic was picking up.

After fours hours on the road, we took the highway to its end, circling to the right around a cloverleaf toward Munich. Now we had to parse more conflicting instructions, because the iPhone was factoring traffic into its calculations. Surface streets were slow going here, and this is something we haven’t seen yet this trip. We discussed that Berlin, while sprawling, seems to lack a certain density of population, particularly in the Eastern sector. Munich is alive.

After many a misdirection we found our hotel and were out.

First stop, the viktualienmarkt, which was already closing down for the afternoon. We have arrived late in the day. 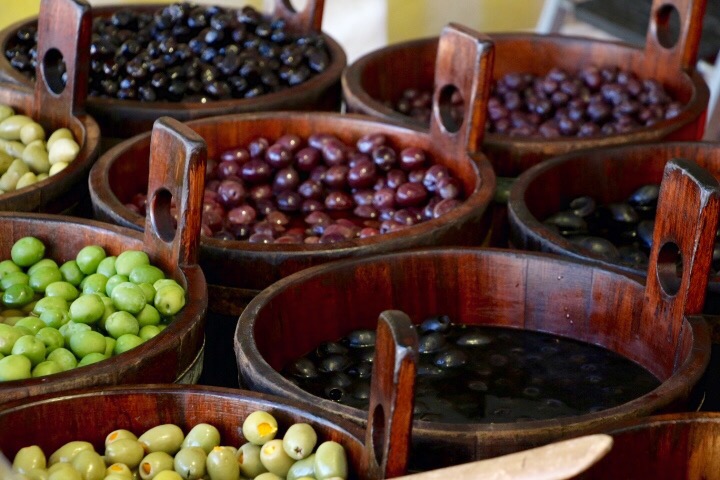 But look at the olives! 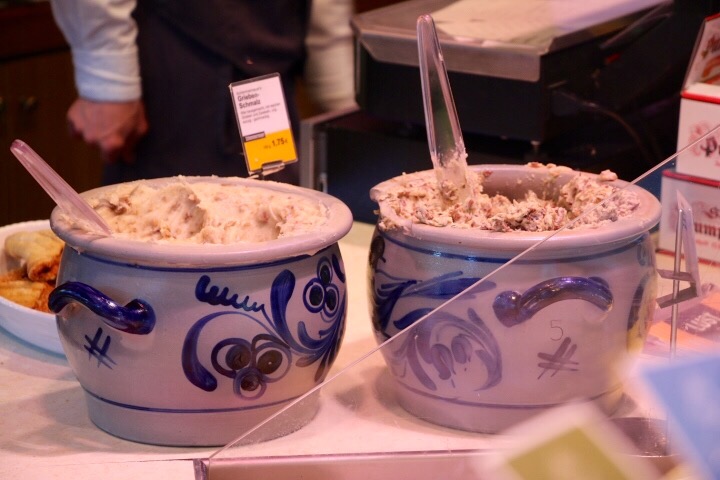 And look at the huge vats of pork schmalz. Imagine the matzo balls I could make with those. 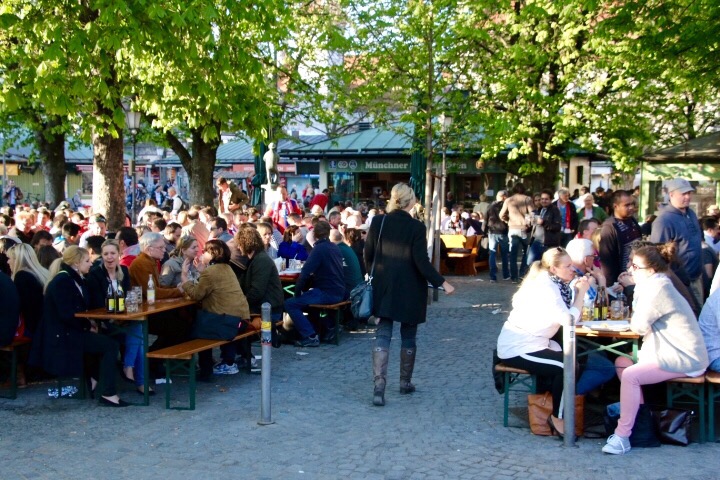 And the locals sitting and relaxing at the biergarten. Munich isn’t like Dresden and Berlin. People try to smile here – it’s a nice change. One similarity, however, is the smoking. Smoking appears to be a national pasttime here in Germany. Only the Austrians seem to smoke more. 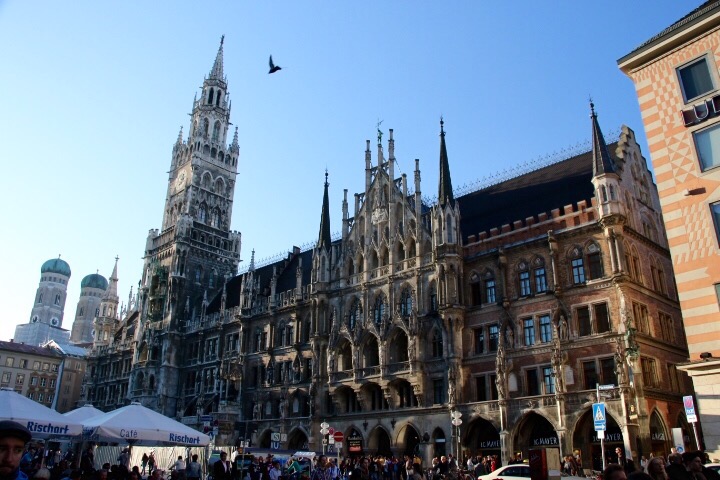 We visit Marienplatz, the main square in town, before finally seeking out dinner. Our morning visit to the museum and the long drive have largely consumed the daylight hours. So after an outstanding meal of duck and dumplings, we are well into the night. With the city around us boisterous with the sounds of a soccer match, the smell of beer, and reek of smoke, we find our way back to the room for the night.