As I noted yesterday, Dresden is also known as Florence of the North (or Florence on the Elbe). I think this reflects its art, its scale, and its location on the river Elbe. But Dresden also has one very striking difference: It is much quieter than Florence. While I love Florence, it really has become Disney-fied, with overwhelming crowds drowning out a great deal of the Italian character. This is not an issue here. There are some tourists, but they don’t crowd all of the streets, and the most commonly heard language here remains German.

So how was today? Well lets start with the hotel. This is the first time I have stayed at a Swissôtel and it is very nice. The room is large, clean, and contemporary. The shower floor is marble, which makes it an extreme hazard when wet, but that’s really the only negative. 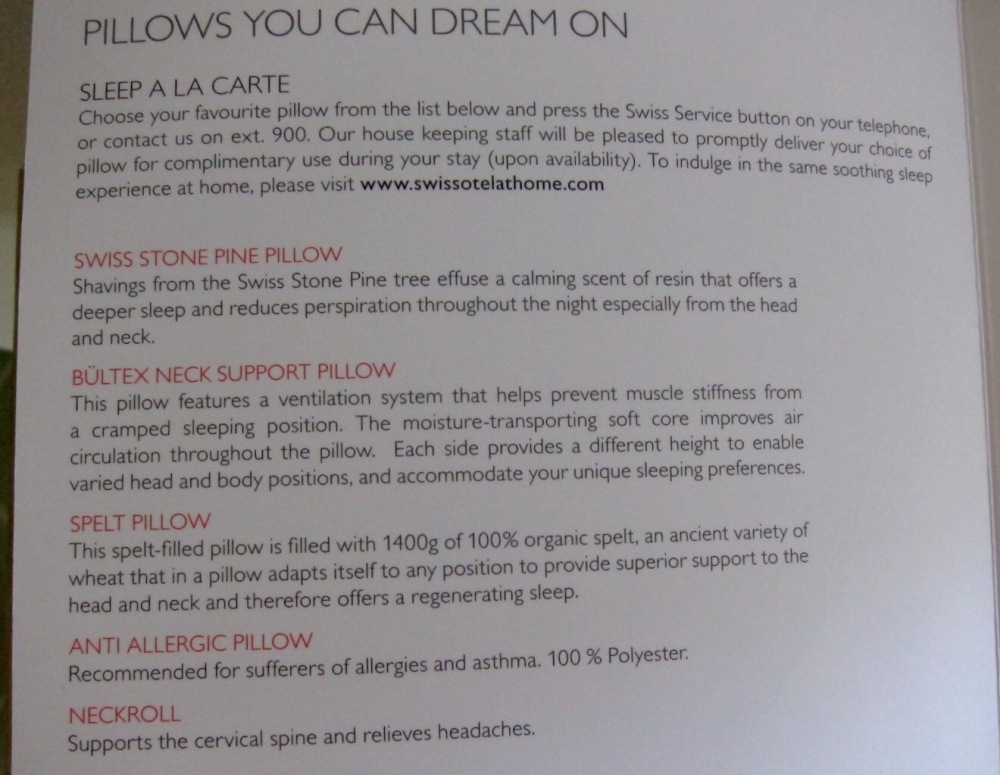 They offer this interesting service: they will bring you a pillow to address your specific requests. I tend to perspire a lot at night (you wanted to know that, I’m sure), and that stone pine pillow appealed to me.

That’s it laying on the chair. And you know what?! It was horrible. Absolutely awful. Like sleeping on a bag of pea gravel. I’m certain it helps with sweating, because the user is entirely unable to sleep, instead spending the entire night tossing and turning in a futile search for comfort. Thereby no hot spots, and no perspiration.

After breakfast, we learned something. There seems to be a recurring theme in my travels: I hit a day of strikes or closures, or something that throws a wrench in my plans. As I stated ealier, Dresden has many similarities to Florence. Well, on Monday all of the museums in Florence are closed. Similarly, all of the museums here are closed on Monday. This is disappointing, because this town is known for her museums and we don’t have a lot of time here.

It turned out to be alright, however. It may have slowed things down a little bit, but this tends to a slow town, more apt to strolling than frantic rushing.

A little history: Dresden was firebombed during the waning months of World War II, and as I stated yesterday this decision has been called into question, primarily by people who feel that its bombing was a tragedy and that it wasn’t strategically important. I can’t address the later point, but given the striking beauty of the buildings here today, many of which were destroyed, I can only imagine how stunning it had been before the bombing. 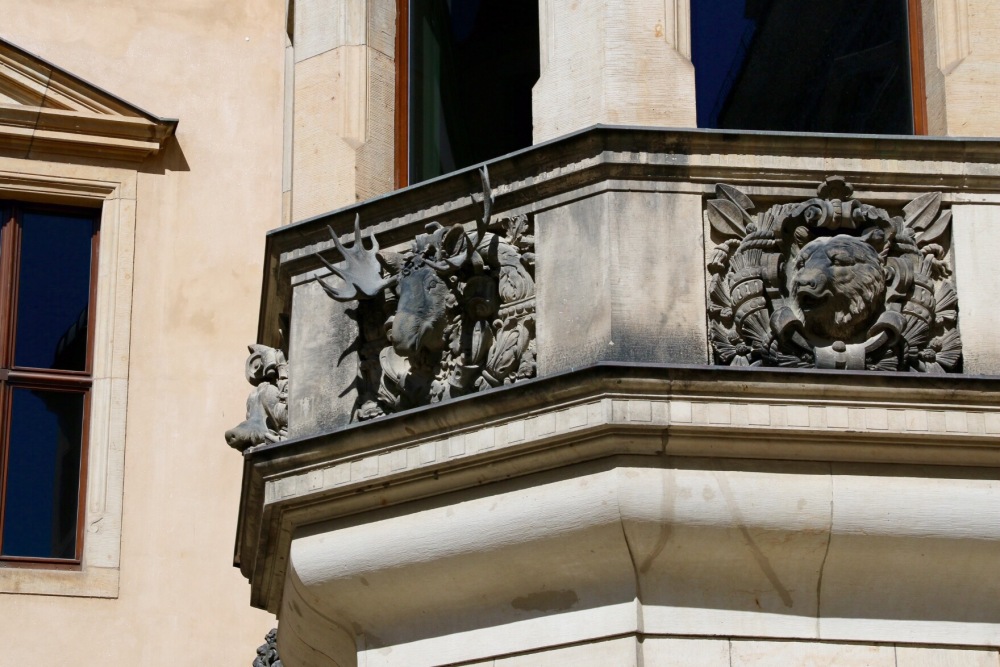 The detail and workmanship are remarkable, such as on this moose and bear.

Stepping into the neumarkt, we see the Frauenkirche dominating the square. This church was built in the early 18th century, and gutted by the bombing of February 13, 1945, with the remains collapsing two days later. The DDR would not consider reconstruction, so the rubble remained as a memorial until the 1990’s, when they finally began rebuilding it. Consecration of the completely rebuilt church took place in 2005.

I didn’t notice the signs prohibiting photography when we entered, so you get to see this. The interior is a little bit spare. I don’t know if there were frescoes initially, but I would imagine that the rebuilding was a massive undertaking, and the replacement of that sort of detail would be more difficult. 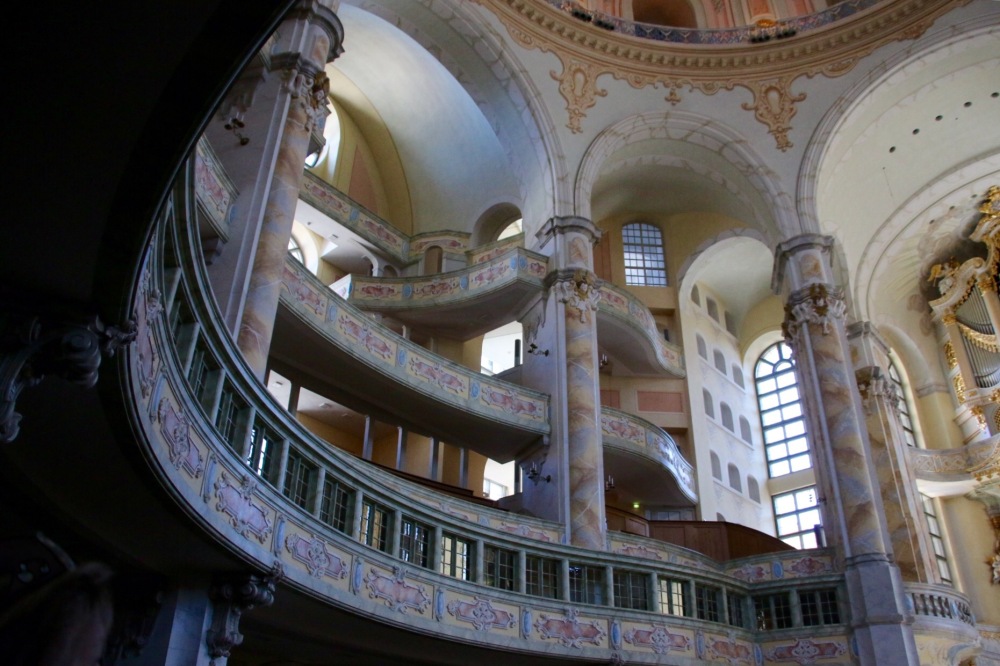 Oh look – they have parterre seating!

We wander the town a bit more, noting this chained head over the door to the police headquarters, before dividing up. D wants to figure out what we can do today, whereas my next goal is to climb to the top of the church. Yes – I’m certain you are wondering about my calf. Basically it is the same as yesterday. As long as I am moving and medicated it is pretty good. And the moving seems to be more important than the motrin.

It turns out that when they rebuilt the church, they added an elevator, so that cut out about 90 feet of the climb, and another 78 feet, circling the dome, is just a long ramp.

This is what I saw when I got there: spectacular views of the town, which stands at a bend in the river. The comparison to Florence is apt, in that there are no skyscrapers here, but Dresden is much smaller than her Italian counterpart, and having been largely destroyed in the war, she has a great deal of communist era architecture that doesn’t match her history.

This is the view upriver. This city was a Unesco World Heritage site until that bridge in the foreground was built.

This is the view downriver.

Oh – and I saw this: It looks like a nuclear power plant, but it isn’t. It’s a heat and power generating station.

I descended and found D back at the hotel. He had a target in mind and we were off to the pfunds molkerei. This is a local dairy that also is known for the opulent ceramic work covering the inside of the building. 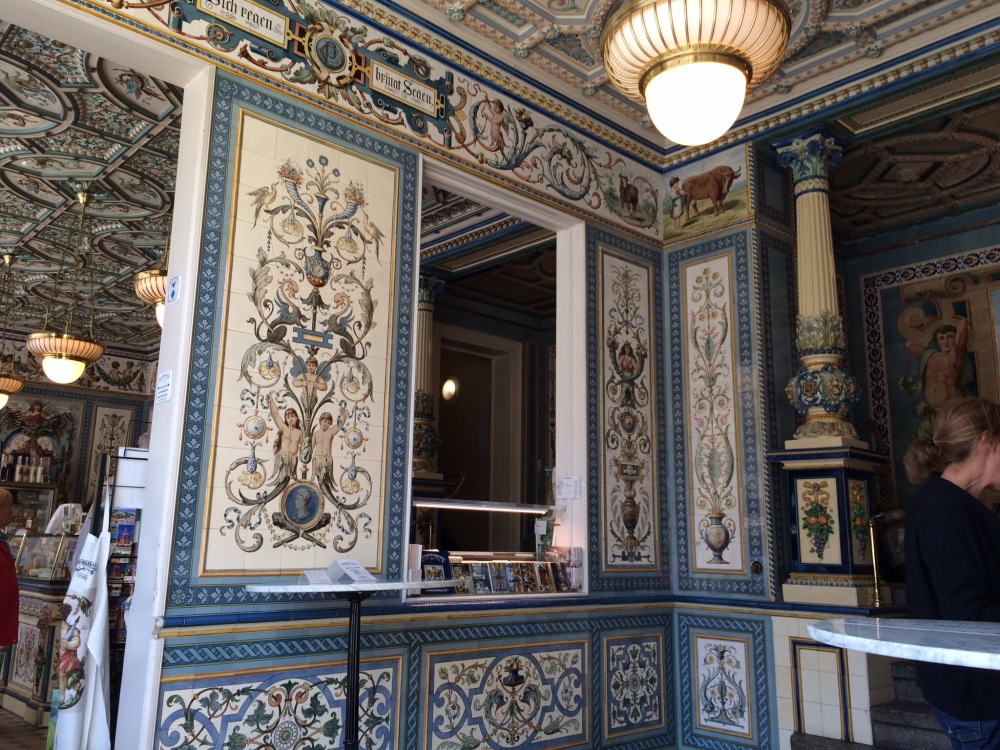 They ask us not to take pictures in here. I don’t know why – I would think the publicity would be good for business.

I don’t always follow directions I guess (that’s the ceiling – I was being discreet about breaking the rules).

We had lunch of local Saxony cheese. The blue was our favorite, while neither of us was a fan of the smoked gouda. I also had a glass of milk, and it was was some of the best I have ever had. Remarkable stuff.

We paused briefly at Albertplatz, where they had a pair of these giant fountains, and then continued exploring the shops and alleyways in town 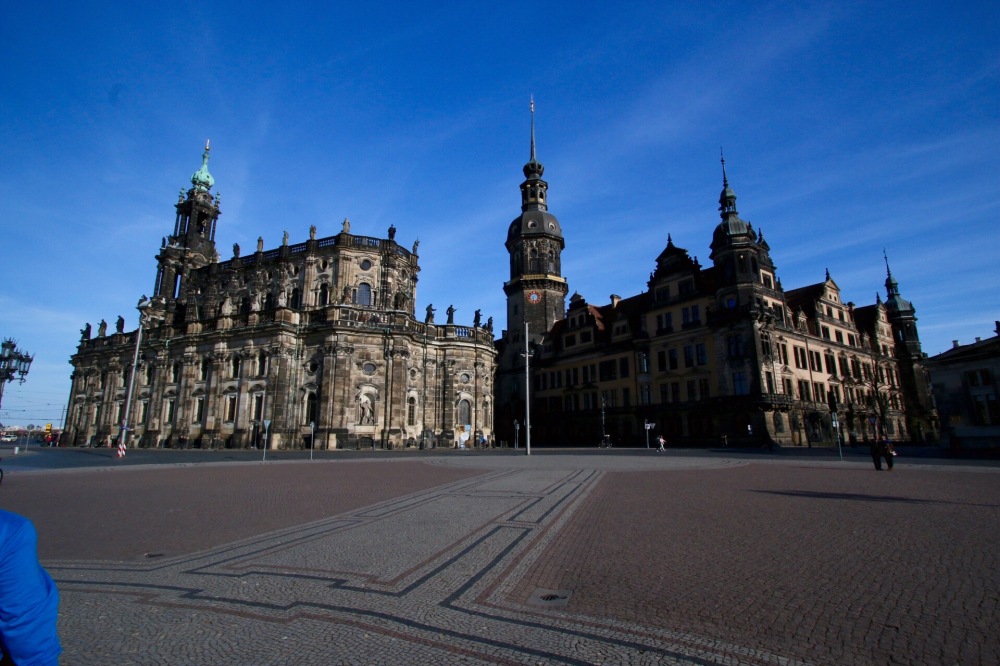 That’s the back of the Catholic Church of the Royal House of Saxony on the left, with the Royal Palace on the right. If you’ve noticed, we have had mostly clear skies here, which seems to violate a rule that Eastern Europe is perpetually cloudy. 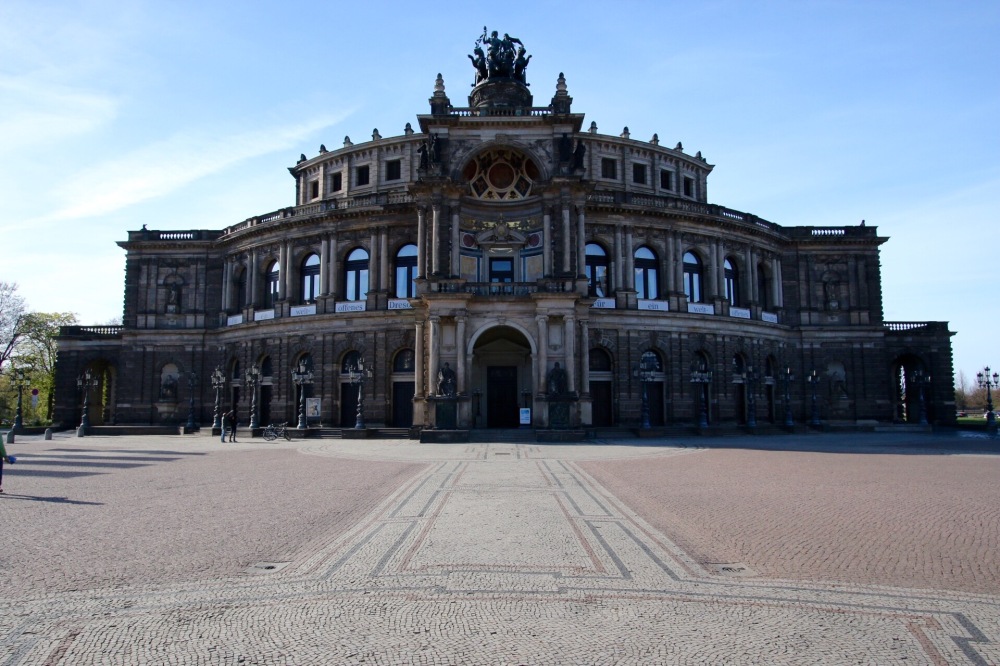 And here is the opera house.

On the way to dinner we stopped by the synagogue here in town. The sun was nearly setting, which is apparently when observant Jews should be gathering, but the synagogue was locked up tight, which likely represents the scarcity of Jews among the local populace. Sad.

After a dinner of potato and sausage soup, followed by a main course of sausage, sauerkraut, and mashed potatoes, we were pretty much done for the evening, returning to our room.

I made one brief excursion later, to get this picture of the opera house at night. 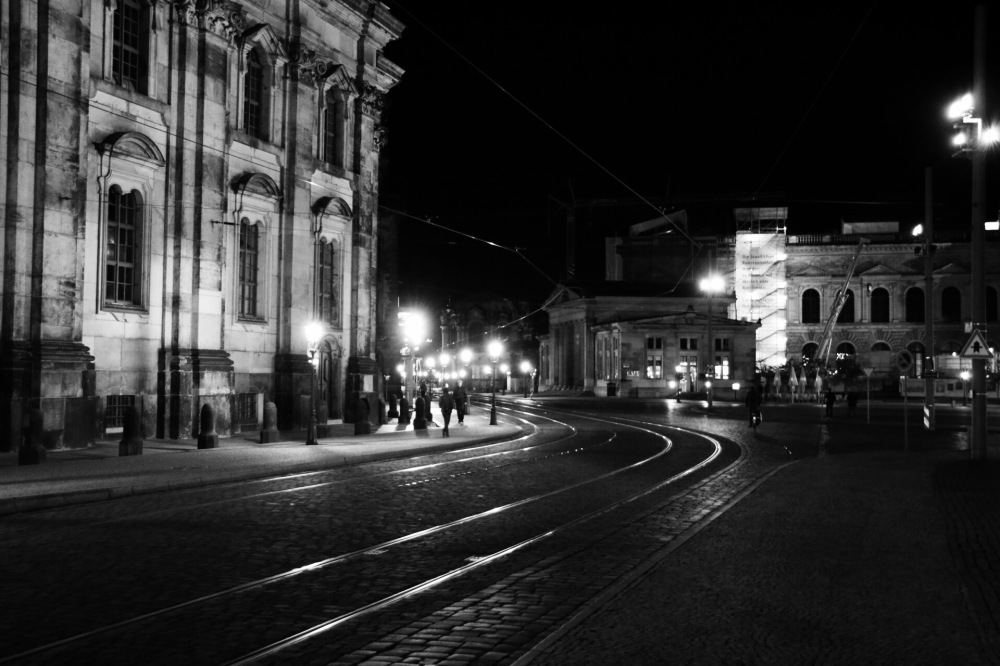 And I grabbed this, too, while I was out, but that was all the excitement there was to have. Tomorrow we may try to hit one of the museums before heading out for our next destination.