It smells here. On April 29, 1945 Dachau Concentration Camp was liberated by American Troops. 70 years later, almost to the day, I’m standing at the edge of the camp, looking at the electric fence and guard towers. The afternoon couldn’t be nicer, with the sun high in the heavens, flowers in bloom, birds chirping, and a gentle breeze in the air. But I don’t smell flowers. I smell something foul. Acrid. It burns my nose.

How does a place reek 70 years later? 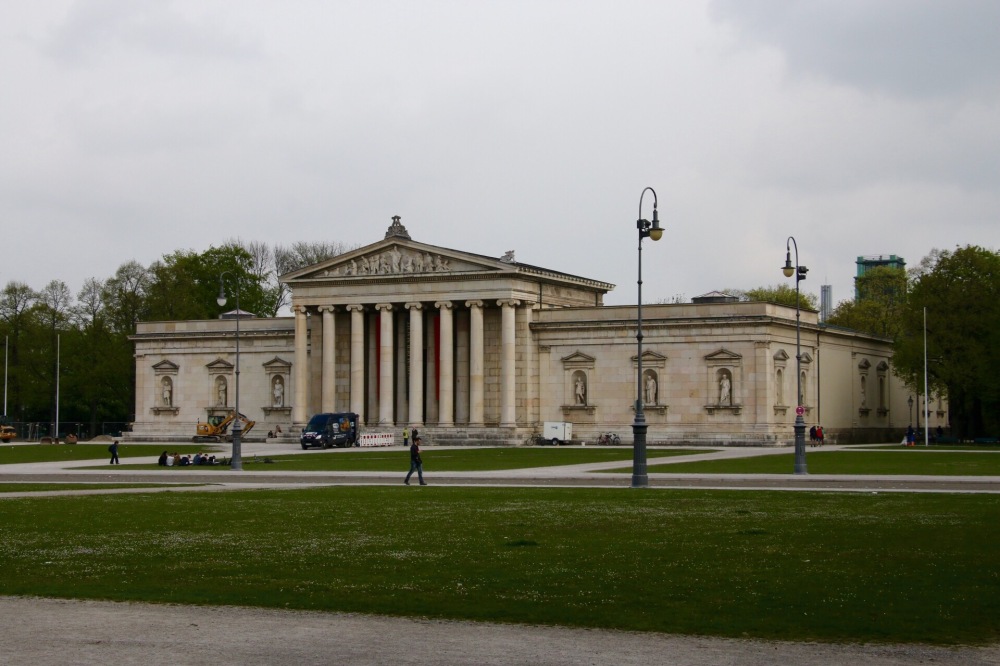 This morning we got up and headed across Munich to the Glypthotek. Mad King Ludwig tried to accumulate as much ancient Greek and Roman art as he could, and his collections are on display in this museum.

There are many beautiful works here, but I am especially fond of this boy hugging this goose to death. You can see the goose crying out, its right wing bent awkwardly upward.

After the museum we had soup for lunch. I had the sour calves lung soup with a dumpling. It sounds strange but reminded me a lot of Chinese hot and sour soup. It was good.

Then we stopped at the pharmacy where I bought compression hose for the trip home. I’d really rather not get a DVT on top of my leg injury.

And with that we were on our way out of the city, heading northwest. We were briefly on the Autobahn, and then off of the highway, driving through bucolic Bavaria. We passed through the town of Dachau, and were headed down a fairly suburban street when the houses abruptly gave way to fences and guard towers.

How do people live right next door to this place? They can see inside from their homes! 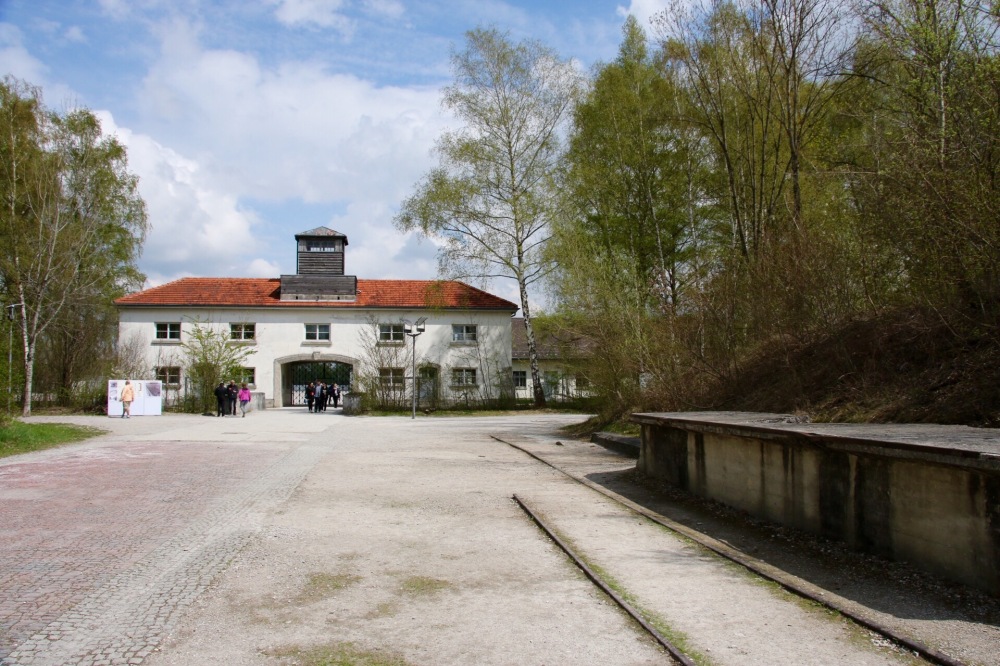 We parked and walked right up to the camp. This is where the trains arrived and unloaded the prisoners.

Numbers are a bit hard to come by. Dachau was the longest-operating of the Nazi concentration camps, operating from 1933-1945. They started with political prisoners, later expanding to include Jews. There were at least 206,000 “registered” prisoners held here during the war.

I’m finding numbers ranging from 31,500 – 41,000 as an estimate on the number of people murdered here (31,500 “registered deaths”). But then there are the prisoners who were too sick or frail to use when they were brought here and never even counted. Dachau is not technically classified as a “Death camp” as most prisoners died of things like malnutrition, typhus, and overwork. 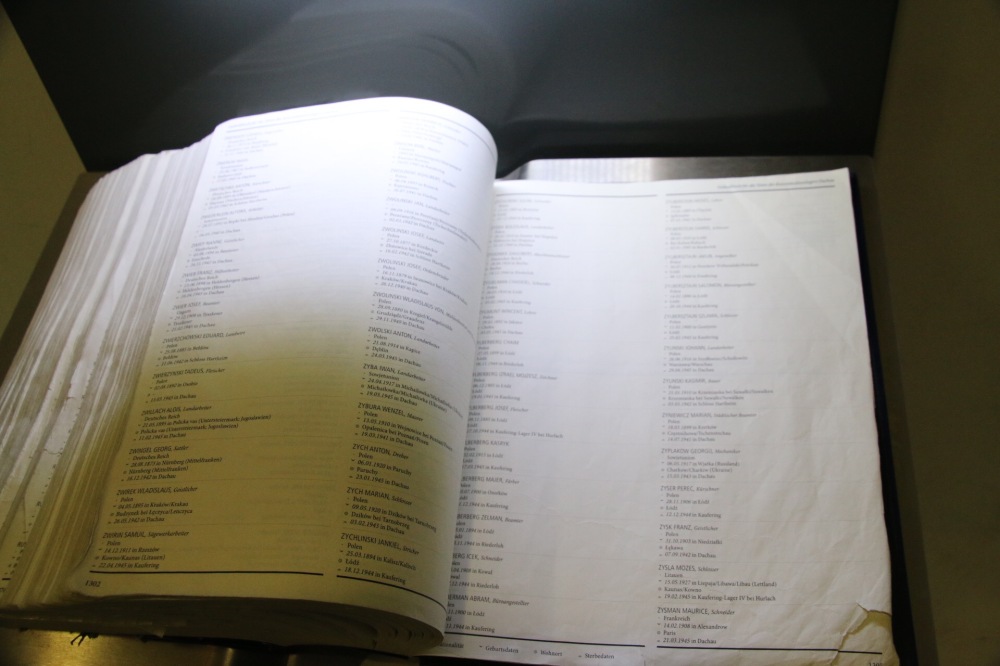 This book lists the known dead. It is 1,304 pages long, and it is filled with names. It is thicker than a telephone book. Still, too many names have been forgotten and are unlisted.

Germans are a very organized people. They even organized the prisoners in their camps. We are all familiar with the yellow Star of David, but they had a very intricate system for classifying their captives. There were political prisoners, criminals, emigrants, Jehovah’s Witnesses, homosexuals, and asocials. The sign above shows the system in detail. 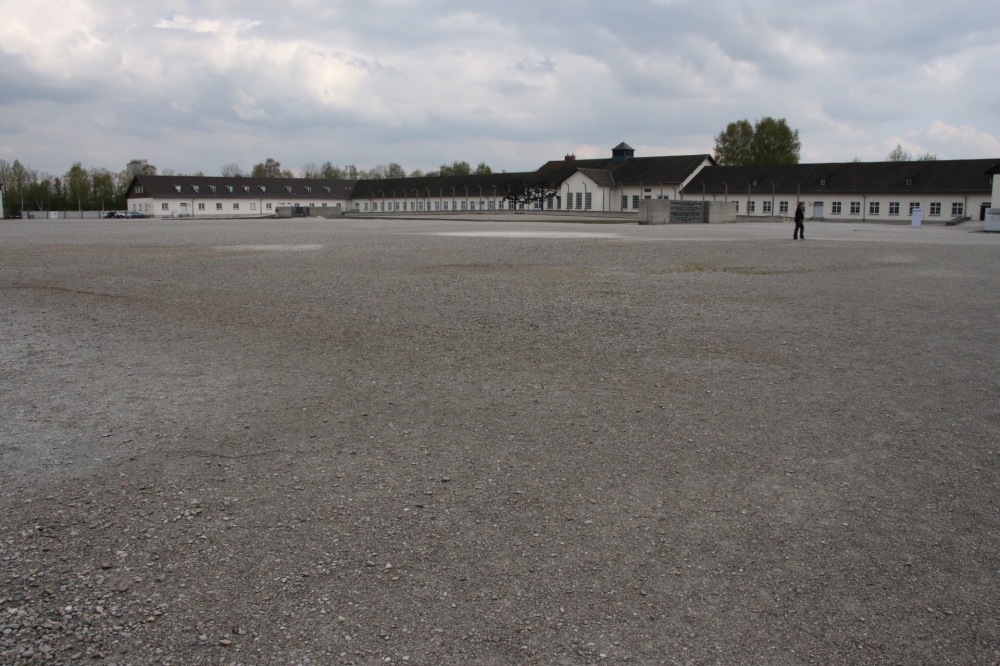 This is the yard where they held roll call every morning.

And this is the wall where prisoners would be shot. There are red streaks running down the wall. Are those really blood stains? After seventy years? Is this even possible? 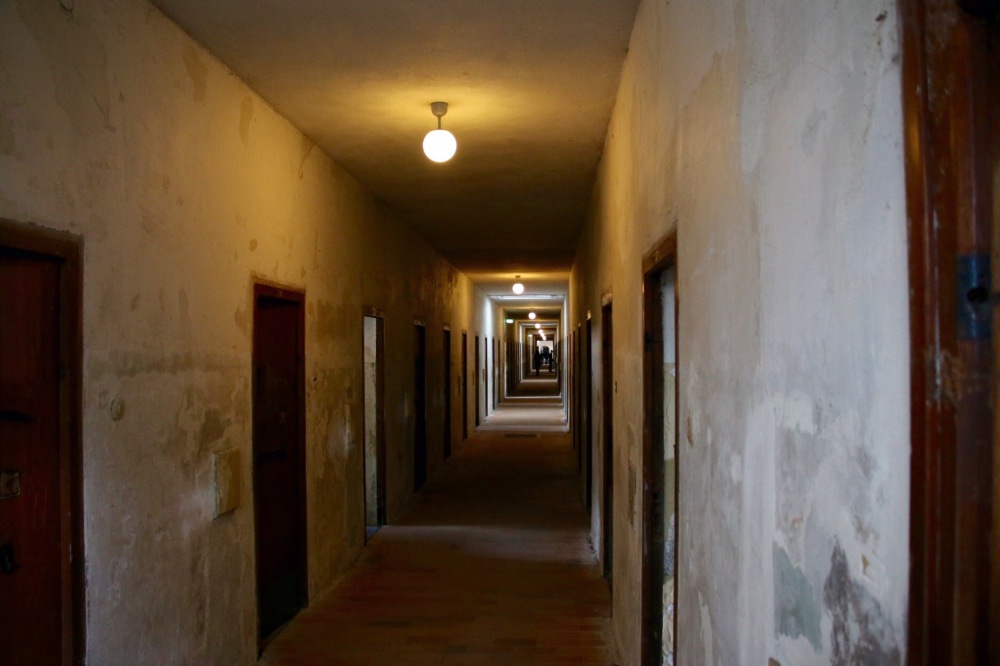 This building is called “The Bunker.” This is where prisoners were brought for systematic torture (separate from the daily tortures that the SS would inflict). We enter at the center of the building and the hall stretches as far as I can see in either direction. It is a horrendous place, the evil permeating the very stone of which it is made. 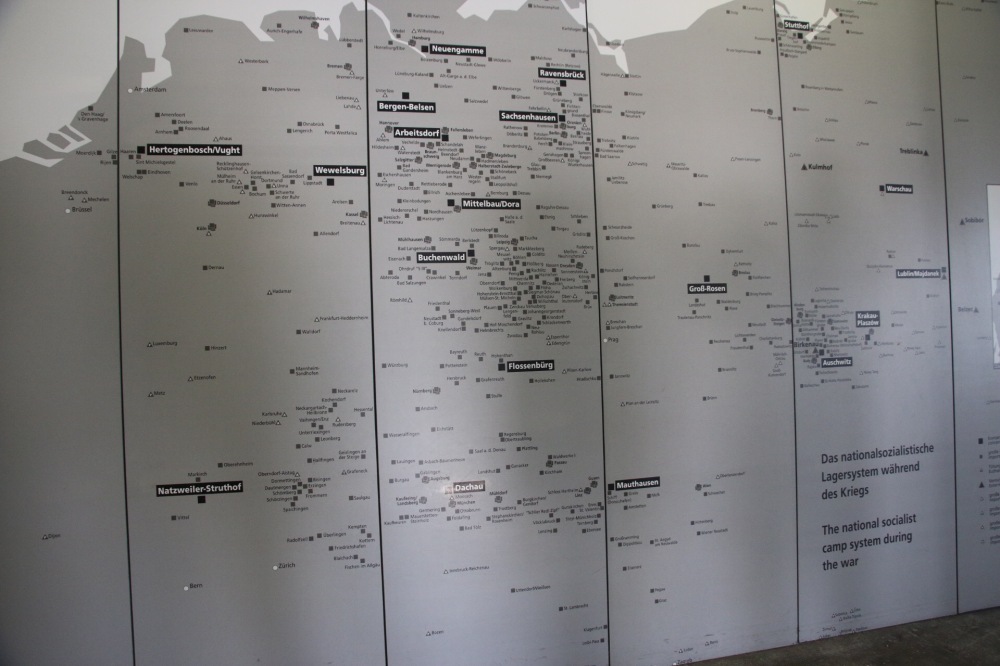 Part of the camp, previously used for prisoner processing, torture, and medical experiments, is now a museum, and among disturbing images of starving prisoners, piles of dead bodies, and inhumanely tortured prisoners is this map showing the Nazi camp system. I can’t capture the entire map in the frame.

Across the courtyard are the barracks. There were 34 buildings like this one, where the prisoners were held. These beds held innumerable prisoners in a tightly cramped existence. 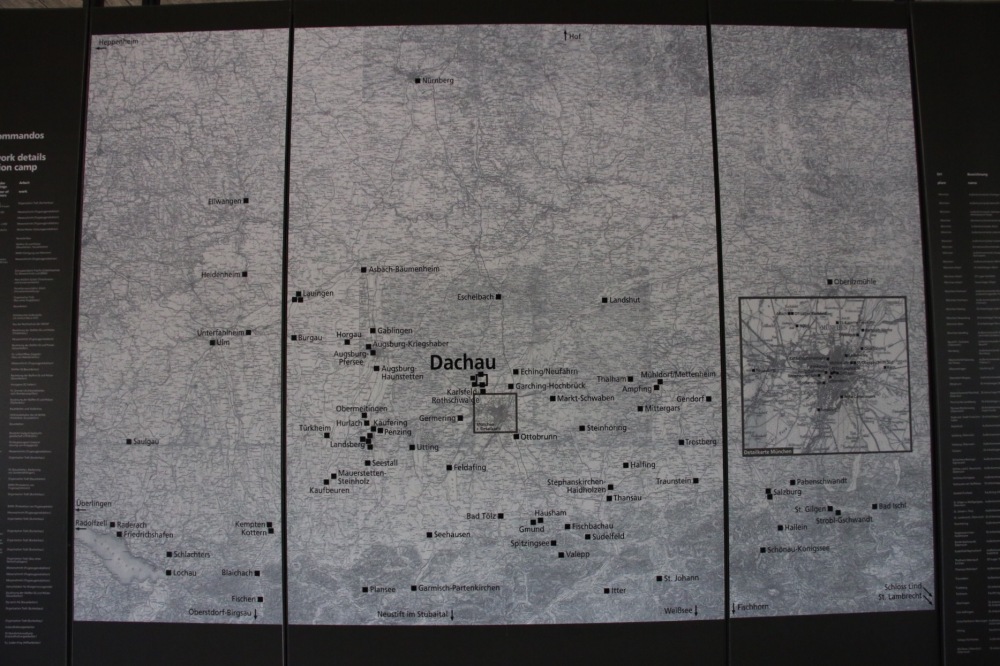 We walk to the back of the camp. I am at once shocked at how small it was, although at other times it seems quite large. It turns out that the “small” area is only the prison camp. The prison is surrounded by a much larger support camp, and there are almost 100 sub-camps in the region.

The smell keeps coming back to me. I can’t escape it. 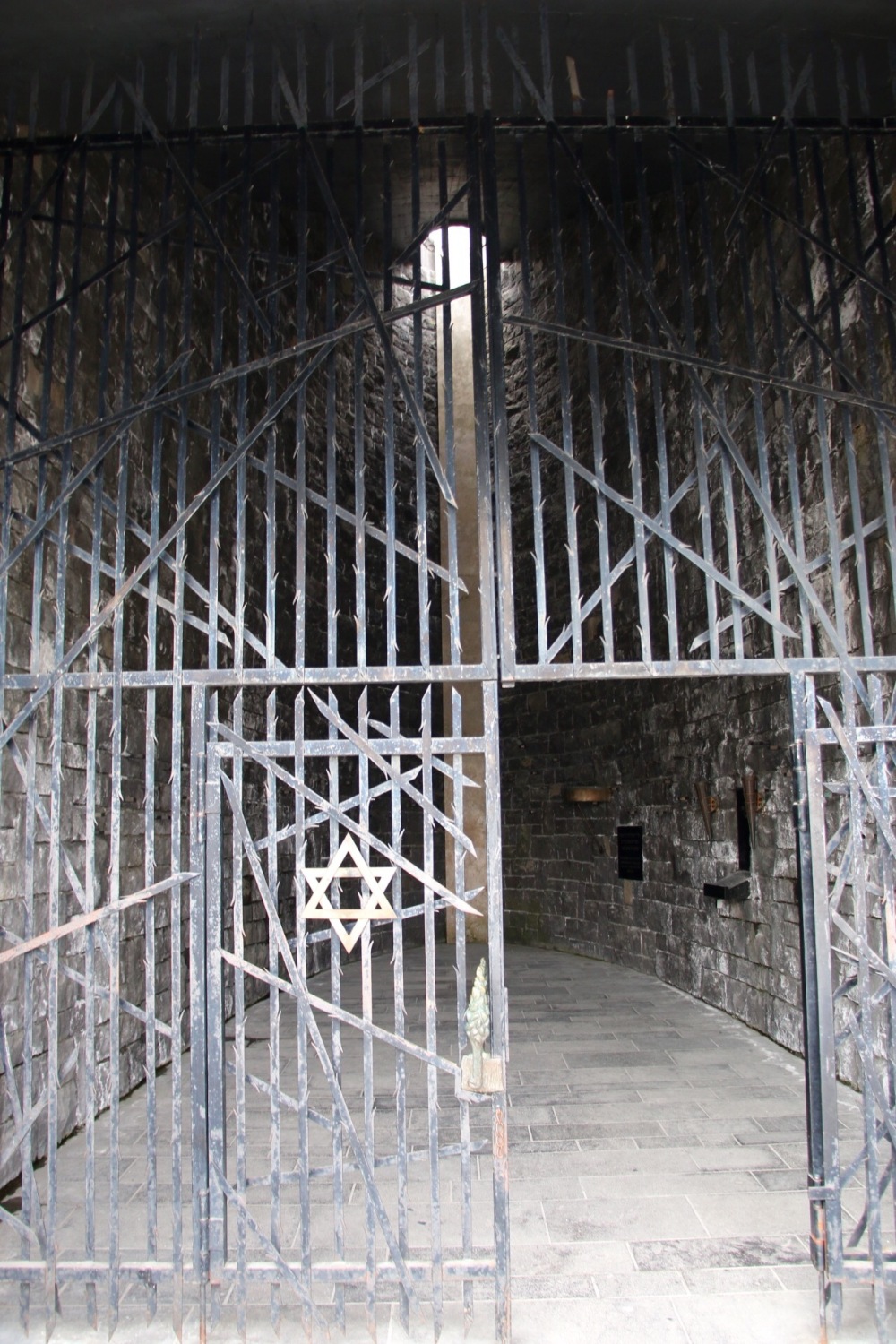 Here we reach the Jewish Memorial.

This is an image from inside the Roman Catholic Memorial (confession: I stole the picture from here). The Christ is striking. Very rarely do we see a crucifix with a depiction of a wasted, starving Christ, but here he is shown as such. I see him and the image echoes back to others I have seen in this place. Christ was a Jew, and here in Dachau he is cachectic. It is fitting.

There are also a Protestant and a Russian Orthodox Memorial.

Beyond the memorials, just on the other side of the fence are the crematoria. This is the first crematorium. 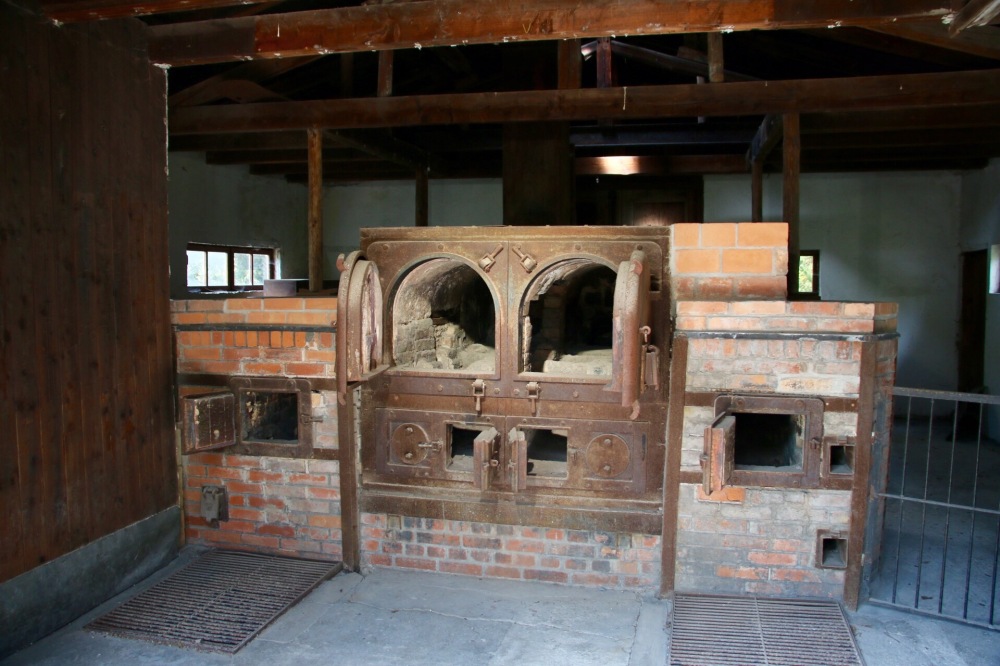 There are two ovens here, but after a short while the corpses were overwhelming the ability of the Nazis to burn them. They complained to the manufacturer, and a new crematorium was built.

This the new crematorium. I’m only showing about a third of the building in this image. 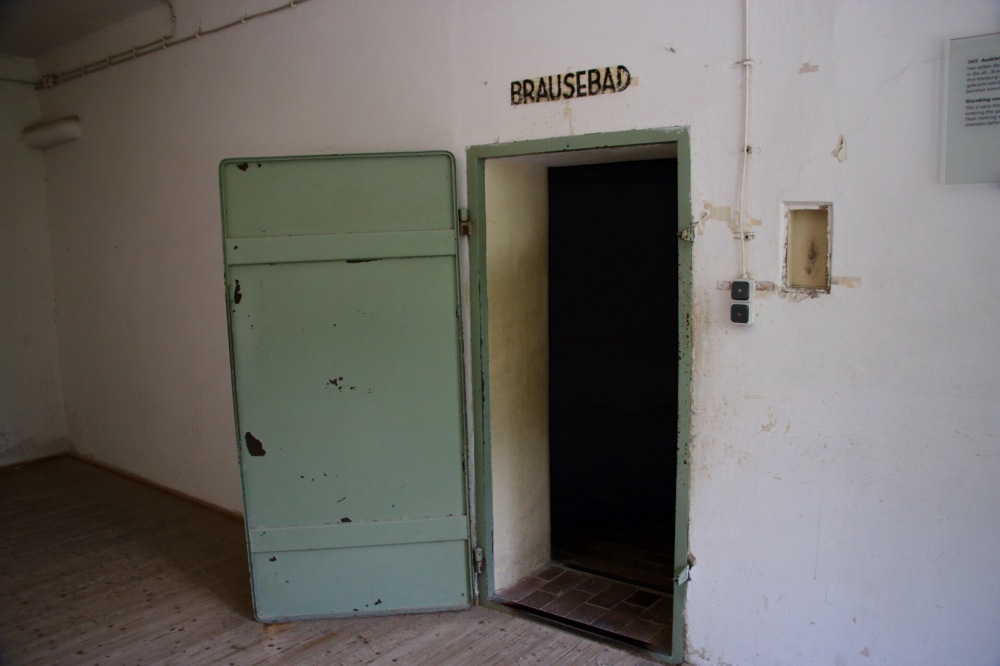 We enter at the far end, passing first through the fumigation chambers (there was a lice problem here) and into a room where prisoners would be given instructions. Beyond that door is the gas chamber. 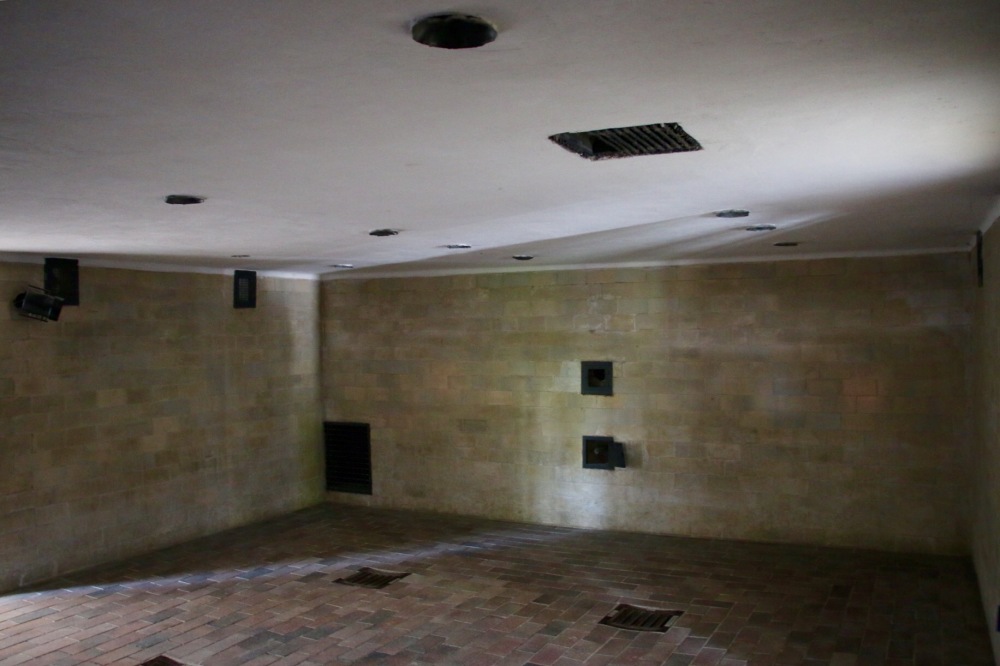 It was designed to look like a shower, in order to keep the prisoners calm. Small groups were murdered here using poison gas, but unlike similar gas chambers in other camps, the signs tell us that this chamber was not used for mass murder, although it was designed to hold 150 people. The murder itself would take 15-20 minutes.

I reread that sign. Small groups are apparently not “mass murder.” And with 40,000 dead, this wasn’t a “death camp.” 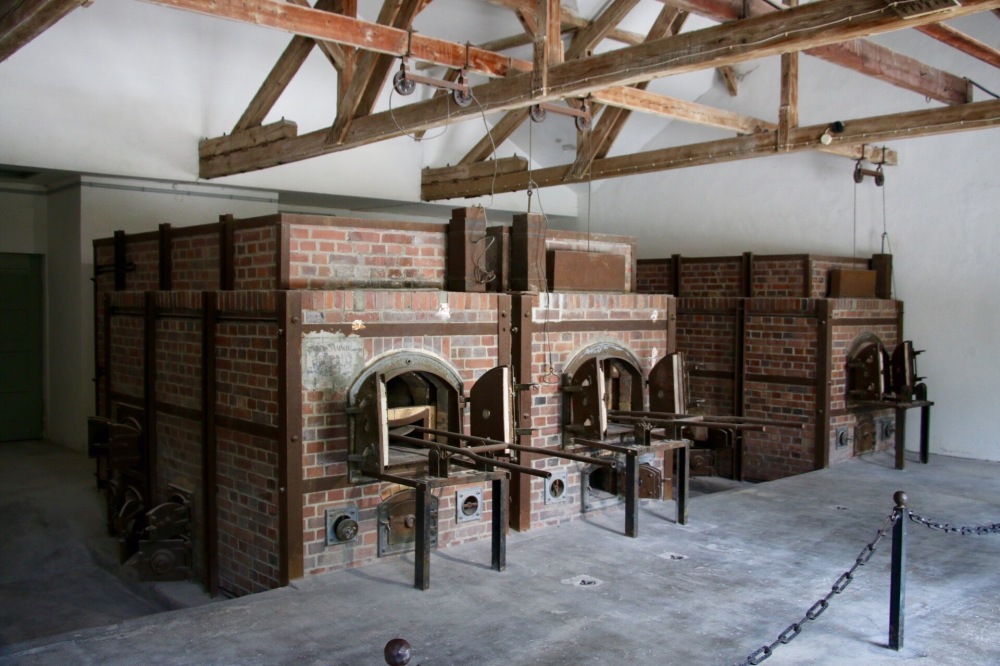 Next to the gas chamber are the ovens. There were four cremation ovens here that ran 24 hours a day. Each oven could cremate two to three bodies at a time. I don’t know how long it took to cremate a body.

Behind the crematorium are gardens that have been planted where mass graves were dug and ashes buried. At some point, the number of dead simply overwhelmed the ability of the Nazis to destroy them, so they resorted to mass graves.

And with that we have seen Dachau. We walk beyond the electric fence, the stench of the place still assaulting my senses.

In the car, on the way to Nuremberg, I am glad to be away. This drive is easy, and we find our way to the hotel and check in, my thoughts still haunted by what I have seen.