When we woke up yesterday we were still debating whether or not we should leave Munich. We shortchanged ourselves on our time there and still have much to see. In the end, we decided to stick with the plan for Nuremberg because the room was pre-paid and because it would shorten our drive later tonight. 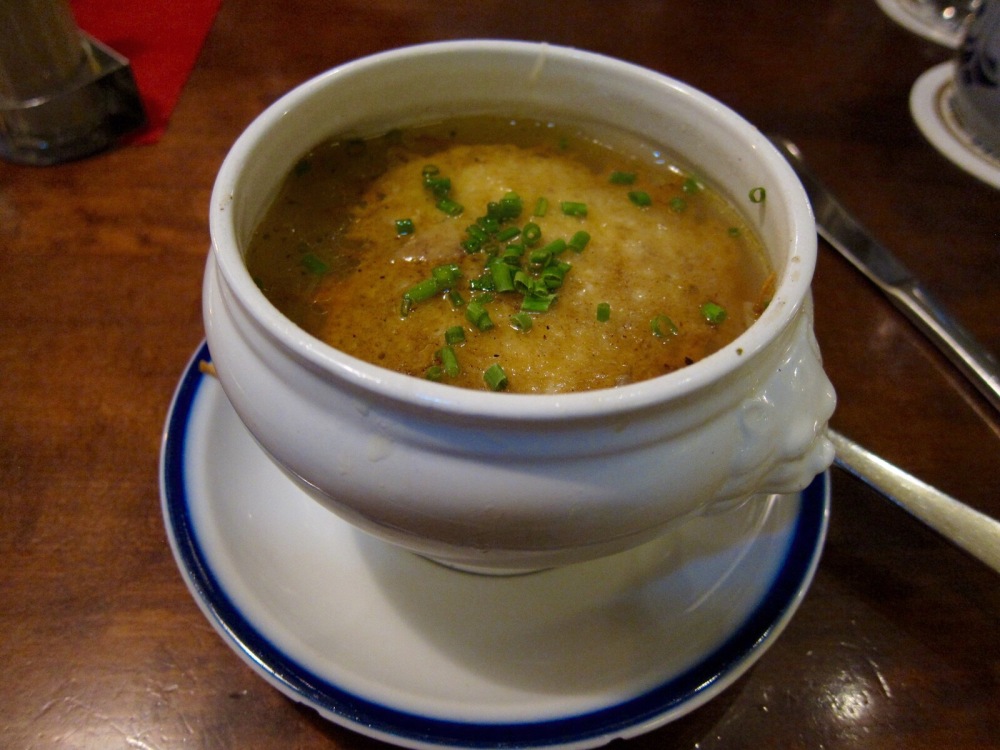 Last night, after arriving in Nuremberg, we went to dinner. For both of us this turned out to be the best meals of our trips, without a doubt. We both had French onion soup, which was made with sweated (not browned) onions and a light broth. Rather than topping with bread and cheese, it was topped with a cheese crisp. We both agreed that this was superb soup, with a finely honed balance of flavors.

The main courses were just as masterfully prepared. I had crispy shoulder of suckling pig, served with coleslaw and potato dumpling. The dumpling was particularly remarkable, as it was not heavy, which has been the norm, but was very light.

After this meal we felt better about our decision to leave Munich for Nuremberg.

The morning today began early when the bells sounded from the church across the street, waking us when the light was still a dim glow in the sky. We ate breakfast, packed, and checked out of the hotel.

First stop. The other church across from our hotel. This is the Catholic Church, that was built in the mid 14th century. During the Protestant Reformation it converted to Lutheran, but the Catholic Church eventually bought it back. The building was almost completely destroyed in the War, but has since been rebuilt.

The organist was practicing something peppy and uplifting when we entered. D reported that he hadn’t been expecting cheerful music in the church, and I’d have to say that it didn’t exactly seem to fit with the gothic setting.

Next stop: The church that woke us up. This is still a Lutheran Church. It, too, was heavily damaged in the War but has since been restored. In the church they have a series of photographs covering the period of time around the war. The first is a picture of the streets of Nuremberg bedecked in swastikas, and this is followed by pictures depicting the damage the church took, and the rebuilding process. The pictures are accompanied by short verses, of which one line, reading “Who could know the war would end like this?” draws an unsympathetic eye. I still wonder if the Germans really “get it.”

Leaving the center of town to our footsteps and shadows, we set off on a heading that gradually veered upward. The road split, and we held to the right, passing between buildings both new and old, all of which pay obeisance to certain Bavarian characteristics such as height, color, and camber of the roof.

As we drew closer to our target, we found ourselves briefly lost, and paused to consult a map. As we debated the best course forward, D asked me, “Where is the Synagogue?”

This was a real question. D has traveled in Eastern Europe and Poland. In the latter case, in particular, he has found that many towns, even in the absence of a local Jewish population, have rebuilt synagogues. He has speculated as to whether the synagogue in Dresden truly functions as as house of worship, or if it was built in recompense. As I stated after we tried to visit, it was locked up tight when it should have been open. What I didn’t say is this: it is a monolithic structure – a big blocky cuboidal stone fortress. There is only one door, and even that is behind a gate.

So when D asked this question it wasn’t a surprise. At the time I was even fairly certain that I had seen one on the map somewhere. We started scouring the tattered map in our hands, street by street.

Some locals, a tall man and woman, approached us, smiling. She inquired, “May I help you?” She smiled at us and really seemed to want to help. It was very nice, and a bit un-German.

To this innocent, even kind, inquiry, D asked, “Where is the synagogue?”

Here is something that we learned: want to make Germans uncomfortable? Ask them to point you to the synagogue. They stammered a bit, shared a few words in German, and then suggested that it used to be where the Catholic Church now stands. I guess that’s interesting information, but given that she was referring to a structure that had burned down in 1349, it was less than helpful.

They traded words again, finally concluding that there wasn’t one close, but instead suggesting a memorial near the river. This was the best they could do, along with the vague possibility that there is one, somewhere, but it is not in the center of town.

She offered a friendly, “Shalom,” and we parted ways.

We were, it turned out, very near our destination. In this case, the Kaiserburg: the old castle above town. A few switchbacks and a steep incline later, and we had arrived. This is described as the unofficial capital of the Holy Roman Empire, and the depository of the Emperor’s riches. It was from here that the Golden Bull of 1356 was issued, formalizing the relationship between the Kaiser and the princes. 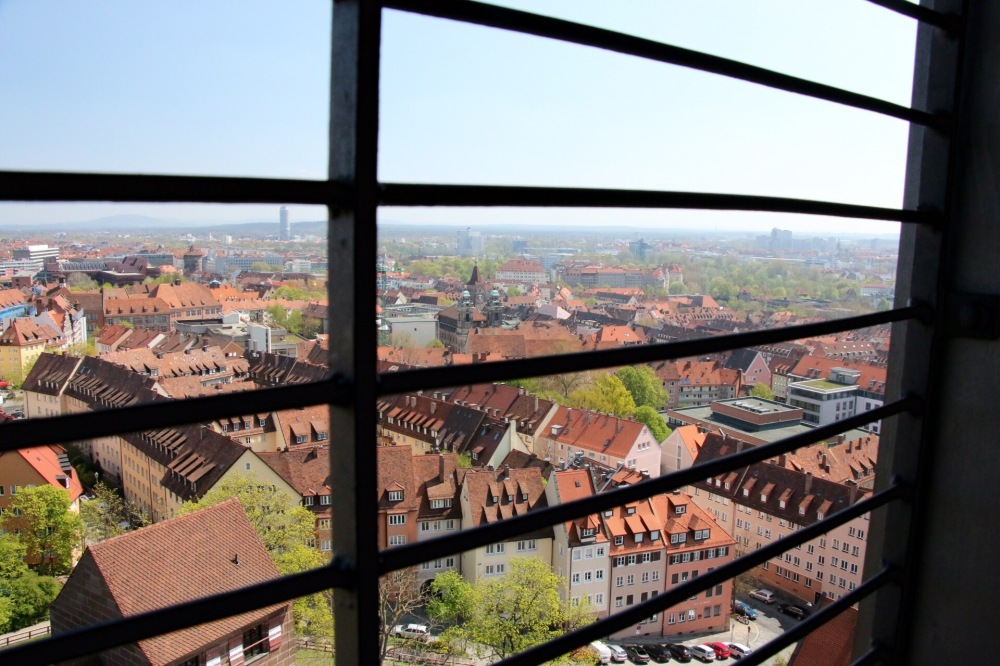 We explored the castle for a time, finding a few items of vague interest, including a photograph of an American Soldier wearing the crown. We also enjoyed spectacular views of the town stretched out below us.

Eventually, however, we conclude that we have more important places to discover. We head back down the hill, stopping periodically to look behind us. We also break for lunch (fantastic creamy horseradish soup!) before returning to the hotel. We collected our bags and our car, set up the Nav units, and head out, toward the southwest.

With a cheerful voice, the GPS announced, “You have arrived at the Nazi Party…”

Technically this is true, I guess. We have arrived at the Rally Grounds of the Nazi Party. If you have ever seen a clip from a Nazi propaganda film, it was probably filmed here. They were masters of propaganda.

Our starting point here is the Documentation Center, where they walk you through the rise of the Nazi party, telling the story of the religious fervor they elicited from their followers, and the tactics they used to reinforce their power. The story of their ascendancy should be required reading of every American. The speed with which they gained prominence and seized complete power is chilling.

In one of the last rooms we find volumes of evidence and transcripts from the trials. This photograph shows documentation from just two of the trials.

Outside of the building the day was sunny and warm. I removed my jacket and we rented bikes to explore the remainder of the site, as it is 4 sq km (much smaller today than originally planned). The ride was easy and relaxed, and the grounds were sedate, belying their gruesome history.

A large lake is central to the grounds, and young sailors test their skills on the water.

First stop: Congress of the Nazi Party. Twice as large as the Coliseum in Rome, this was to be the site at which the Party met, but was never completed. Outside, the parallels to its Italian counterpart are obvious.

Inside, it surrounds us with bare brick, clearly an incomplete edifice. They have debated completing vs destroying this monument, and both options are too expensive.

To the North of the site, amidst a dappled park we find the remains of luitpoldarena.

This was the site of massive Nazi Rallies in the late 1920’s and ’30’s. Little remains of the arena itself, but a few columns at one end. Imagine this field full of tens of thousands of people, wearing Nazi regalia. The thought is terrifying. And it happened.

The platform stands like a broad altar, beset along either side with six firepits, that burned with a cabalistic fury during the rallies.

The videos I have seen of this are chilling (also, I may be now banned from Europe for looking at Nazi propaganda in order to get some of these images for you).

The passage of a nun, jogging through the park in her habit, brought us back to reality.

We retraced our path and left the Congress in our wake. Passing around to the far side of the lake, we came upon the Zeppelin Field

This was another site of massive Nazi rallies. It’s hard to be here, knowing what has been, but it is harder to not be here. I cannot accept the thought of not knowing – it incumbent upon all of us to know this evil, in hopes of recognizing it when it returns.

And so we wind up our macabre tour of Germany. Neither D nor I really intended this trip to be quit so grisly, but we went where history took us.

After the rally grounds, we hit the road to Frankfurt. Due to an accident closing the autobahn entirely, we were re-routed through pastoral Germany, which was therapeutic for our souls. After these two weeks, I feel that it truly is time for me to return to my home, and to stay there for a few months at least. 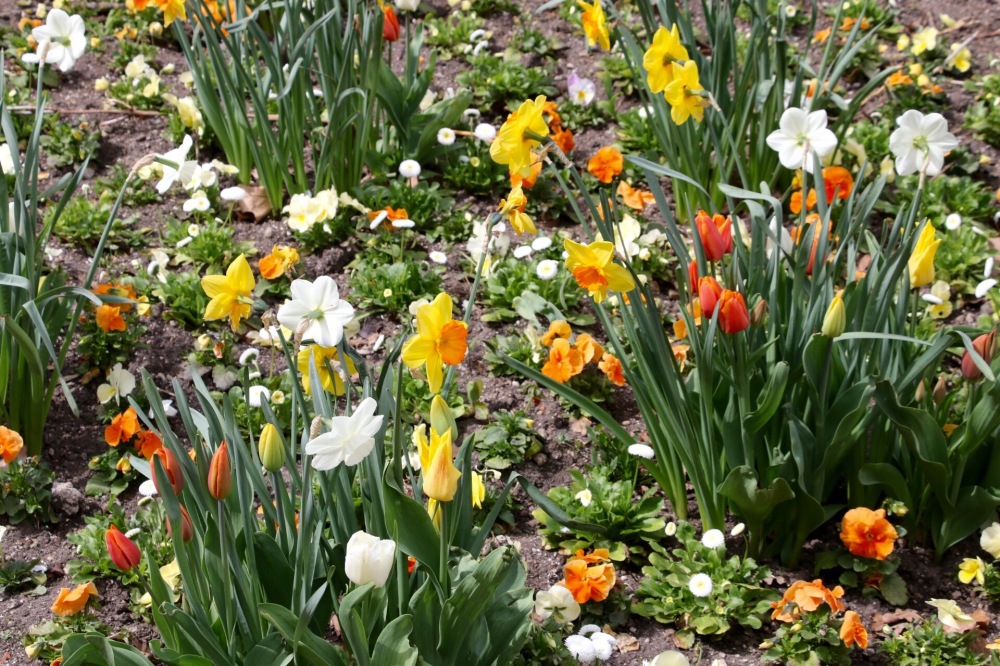 I hear that winter has returned, so for those of you back home, here are a few flowers to gaze at. Spring will come. Eventually.