I’m in Istanbul. Just think about that – I’m in Istanbul, where East meets West. I’ve now been in both capitals of the Roman Empire, and in many this city reminds me of Rome, with its narrow crowded streets, it’s ancient buildings, and its mass of humanity. Istanbul has over 2000 mosques, and while the Roman skyline is dotted with domes and crosses, the skyline here is marked by domes and minarets.

Istanbul lies on the straits of the Bosporus, and I’m on the European side right now. Hopefully I’ll get to cross to Asia this trip, but if not, I’ll just have to come back sometime.
I had breakfast on the 6th floor of the hotel this morning. The setup confused me at first, because the restaurant is on the 6th floor, but the elevator only goes to 5. It turns out you have to trudge up the last long flight of stairs to get to the 6th. Breakfast here is the biggest breakfast buffet I’ve ever seen. They have gobs of bread, rolls, and sweet rolls. They have at least 3 different types of olives. There are about 8 types of cheese, cucumbers, tomatoes, halal cold cuts, and plenty of hot foods as well. Then around the corner on the other side of the dining room are yogurt, honey, cereals, sweets, nuts, and more. And the quality of the foods is outstanding.

After breakfast I walked through the quiet streets to the Ayasofia, formerly the Hagia Sophia, in the pale Istanbul morning. The city lay there, slumbering, under a blanket of haze that muffled the living world and called out to the dead.

When this building was constructed, in 537 AD, it was the largest cathedral in the world. It maintained this status until the Seville Cathedral was built almost 1000 years later. It was originally an Orthodox Christian cathedral, but then was converted to a mosque in 1453. It continued in this role until 1931, when it was closed and converted into a museum. She squats today on Sultanahmet Square, her ponderous appearance offset by the four minarets that were added at her corners.

Inside, she is ethereal, her dome reaching high into the heavens above. 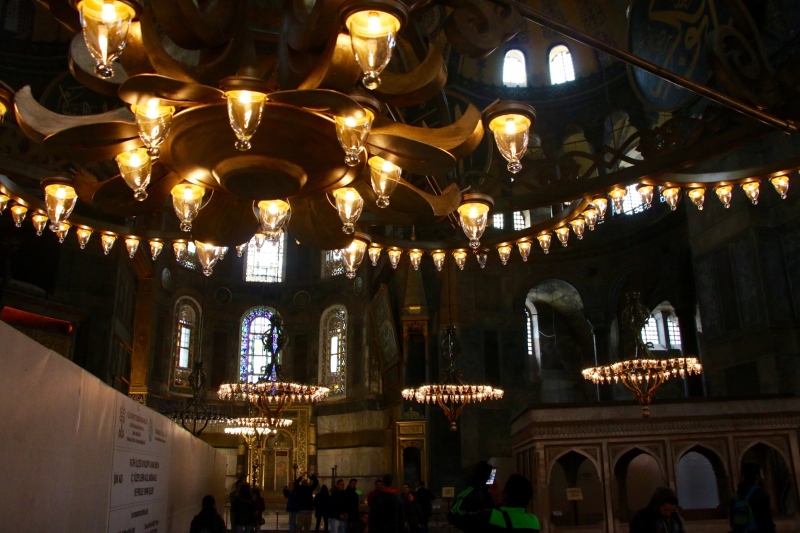 And she is brightly lit. It’s not the lamps that are doing this, but rather the many windows. She is much better lit than many of the Western churches I have visited. I suspect that it’s a combination of more windows and clear, rather than stained, glass. This actually creates problems for me getting pictures, because the light and dark work at such extremes.

When she was converted to a mosque, her mosaics were either plastered over or removed. Some have now been uncovered and they are beautiful.

Here we see the icthys, an ancient Christian symbol, nestled up in the corner. This is not the fish that we, today, associate with icthys, but rather it’s more ancient form, with which early Christians communicated. I don’t have a picture but this was scratched into stone across the Aegean. 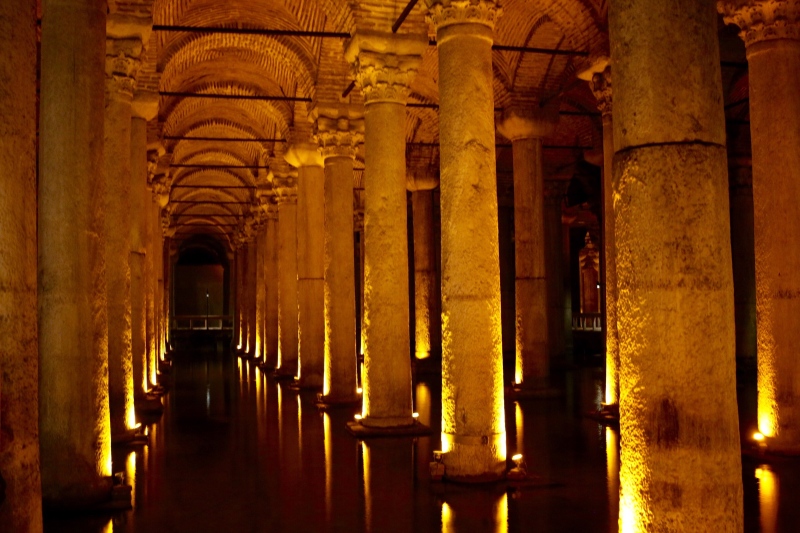 Next to the Ayasofia is the Basilica Cistern. Down her damp dark steps I climb, cautious not to slip. Cisterns were very important to supply water in Constantinople. This is another sacred space, the only sounds being dripping water and faint footsteps.

There are two medusa heads deep within the cistern. Nobody knows why they are here and why they are positioned this way. The other one is upside down. Photos always show that one, so I’m showing you this one.

At this point it would make sense to cross the square and visit the Blue Mosque, but I am told late morning Friday is not a good time to visit because Muslims are worshipping, so instead I go to the Topkapi Palace.

On the way I stop first at the archaeology museum, which is very introspective for me. I look at these items, dating to the end of the 6th millennium BC, and I can’t help but think of the person who crafted them and the hands that worked them. Nobody said to him (or her?) “make this one well, it’s got to last 7,000 years.”

After that I finished my morning in the former sultans’ palace. The grounds are lavish and beautiful

This was the audience room. I think. 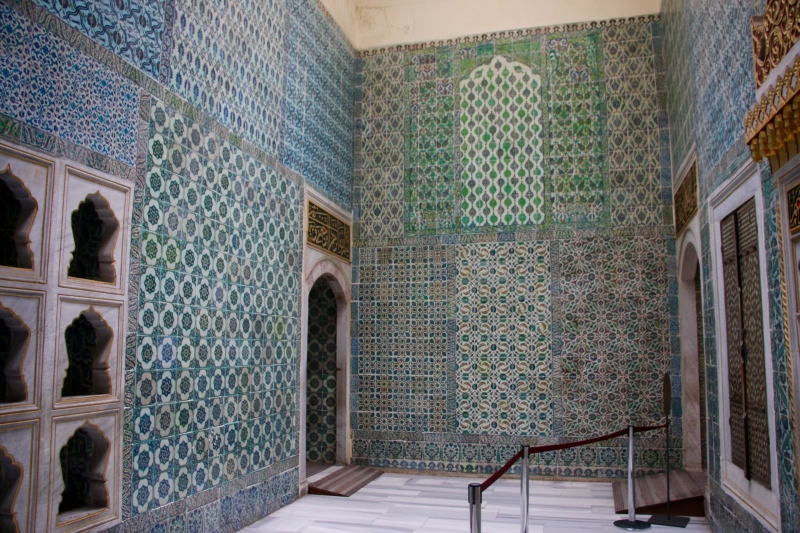 The thing about visiting the palace is all the rooms start to look the same. Muslims are very serious about avoiding graven images, so rarely do you see depictions of faces. So instead, the rooms are decorated with tile. At some point, I quickly “tiled out,” much as I have “museumed out” elsewhere. I’m just not a fan of tiled walls and they wore on my quickly.

And as morning turned to afternoon, the call to prayer echoed across the palace grounds and I decided to eat lunch at the palace restaurant. Yes the food probably wasn’t as good as I could have had elsewhere, but I had a view of the Bosporus, where the ships crossed in front of me in an elaborate waltz and I ate to the sound of sea birds and the song of air horns.

And that was just my morning!