I think I’m spent. This is a week – no, not even a week, really – that has had me sightseeing nearly nonstop. I had a few things to check off the list, and then I am done.

First stop is the Sultan Ahmet Mosque, better known as the Blue Mosque. Built in the 16th century, it sits on the opposite side of Sultanahmet Square from the Ayasofia, and when one stands in the square there is a tendency to look back and forth from one to the other.

She has six minarets that reach up gracefully, grazing at the sky.

I had attempted to visit yesterday afternoon, but arrived just when prayers were starting, so today, knowing the schedule, I arrived at a better time. I walked to the far side, where the entrance is, and took off my shoes. They supply visitors with plastic bags so we can carry our shoes with us inside.

Within its walls, as without, it is a beautiful building, open, bright, and airy, with circles of lights hanging just a few feet above our heads.

Much higher above us the dome is ringed in Arabic script, presumably verses from the Quran.

The walls, as in the sultans palace, are tiled with finely wrought tiles in shades of blue, from Íznik, Turkey. It’s very nice tile. 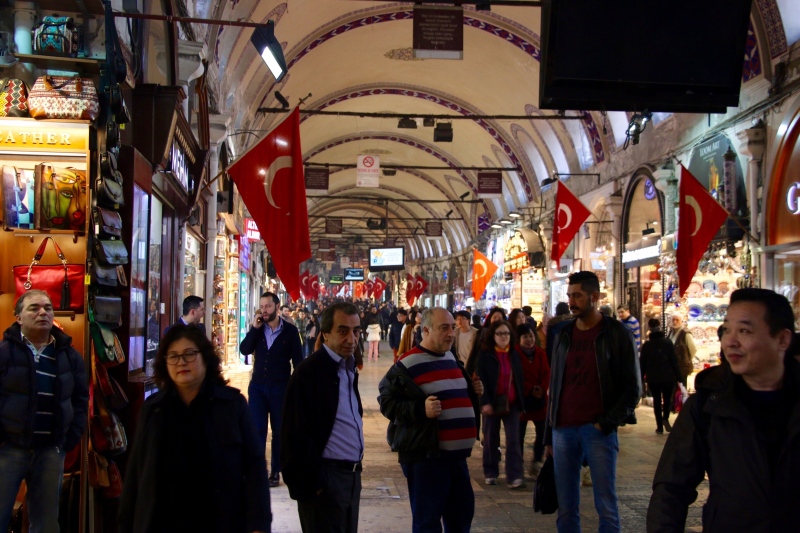 Exiting the mosque, I work my way through the surrounding streets to one of the smaller bazaars. I went to the Grand Bazaar yesterday afternoon where the vendors tried to grab my attention with various different opening lines. “Hallo.” “Merhaba.” “Buon giorno.” “Hola.” “Would you like some Turkish delight?” “You must be Turkish, you look like a Turk.” And my favorite: “You look like a carpet buyer. Let me introduce you to my uncle.” 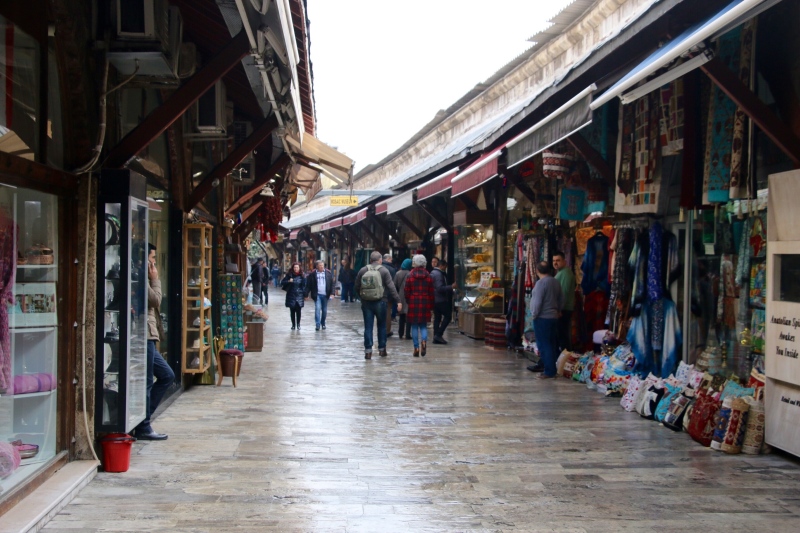 This bazaar is much smaller, really being just a long street.

I’m not here for the shopping, however, as I really want to visit the mosaic museum, built over the great hall of Justinian’s Byzantine palace. The mosaics here are outstanding, encompassing an expansive array of imagery.

There were a few too many images of bunnies being killed, and I was much more partial to this image of warriors battling against a tiger.

Now I needed to get out of this district. And I was at last done with sightseeing. I needed to see more of Istanbul, so I boarded the tram to the Beyoglu neighborhood, across the Golden Horn (a waterway on the European side of the city). I did not cross the Bosporus, however. That will have to wait for another trip.

Starting at Taksim Square, high on a hill, I began my stroll downward along Istikal Cadessi, a major shopping area, and pedestrian zone.

I paused only briefly in this Greek Orthodox Church, mostly as a curiosity given the rarity of churches in this city today.

As I meandered down the hill, stepping into branching alleyways, I found little of interest for me as a buyer. This wasn’t about shopping. Rather it was about me being relieved to be out in the sun, and to just have a relaxed walk absorbing the energy of the city around me.

But some of the sights of Istanbul were absolutely striking. 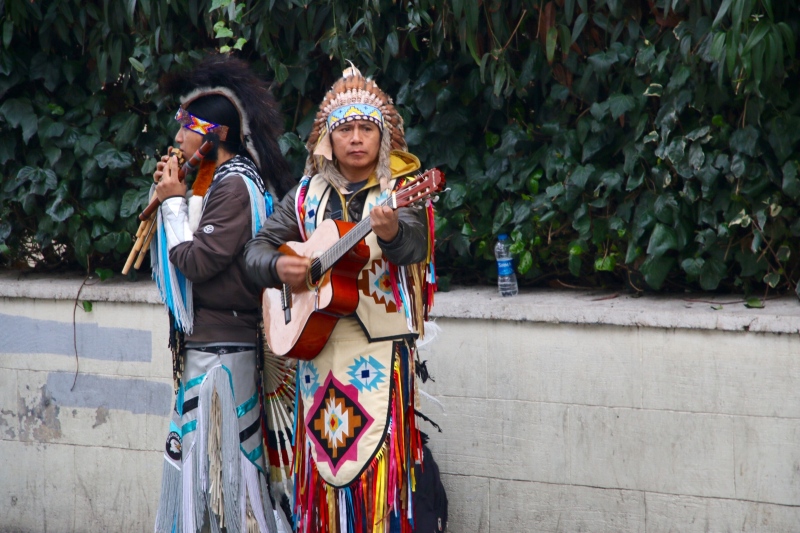 And some of the sights were confusing.

At its far end, the street reaches the bridge back across the Golden Horn. At the very left edge of this photo we can see the Ayasofia in the distance. The city is hazy again today, with a white pallor cast over everything, like a cloud of incense hanging low about us. I can’t help but wonder if it normally this way. Could it perhaps be smog?

I’m told this is a very beautiful mosque. The schedule indicated said that it should be opened for visitors when I was there, but it wasn’t.

Instead I went to the spice market. I bought a few things, but shockingly little. I’m just not good at negotiation, but here’s how it goes: They ask a price that’s way too high. I counter with a significantly lower price (but probably not low enough, as I have this bizarre American guilt about haggling). You settle on a price, but then they call their “employer” to confirm that the price is acceptable because it is just so low. In truth, the last step is certainly a show to help the buyer feel good about being robbed blind.

My last stop of the day before dinner was at a Hamam, a Turkish bath. I have spent the better part of a week carrying around a camera and, at times, a suitcase. A massage was much needed and very helpful. I have a long journey ahead of me tomorrow, and I will do my best to be rested for it.