There are a lot of olive trees here. They’re everywhere. It makes sense, I guess, as this small island produces 5% of the world’s olive oil. They don’t really have an established identity in the international olive oil market. Instead, the Cretan olives get exported to other countries, such as Italy and Spain, where they are used to make oil.

How do I know this? We did olive oil tours today. We spent the morning at an olive oil factory for Terra Creta, where they took us through the entire process of olive oil production, starting outside where the guide explained that in Crete, because the countryside is so mountainous, they are unable to use machines to harvest the olives. Instead they must be collected in nets by beating the trees, and then collected by hand in plastic boxes or burlap sacks.

The farmers then bring their olives here where they are placed in these elevators and leaves removed. There is a lab right next door, where a small sample of olives are tested for quality, with a goal of 0.2-0.8% acidity. 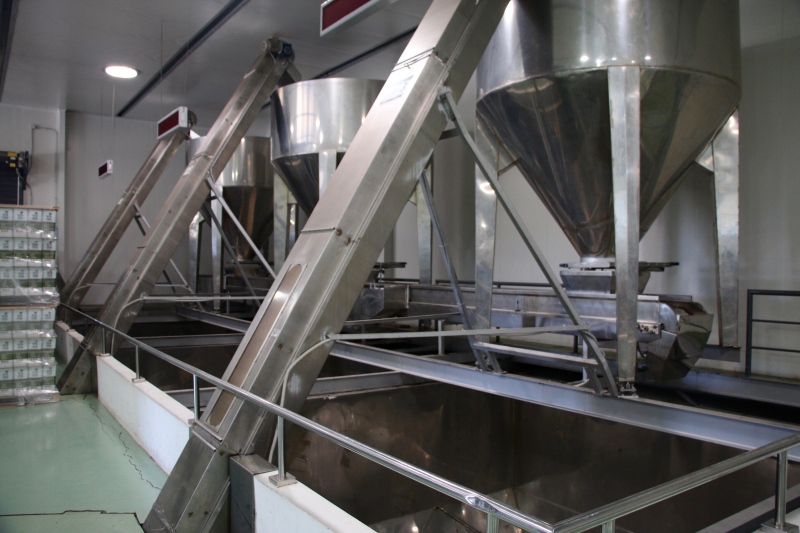 The olives then move to these big silos, from which they are cleaned, and then crushed, pits and all.

The slurry is then moved through these mixers at 27 degrees C or less, passing through to this centrifuge, which separates the oil from the solids. 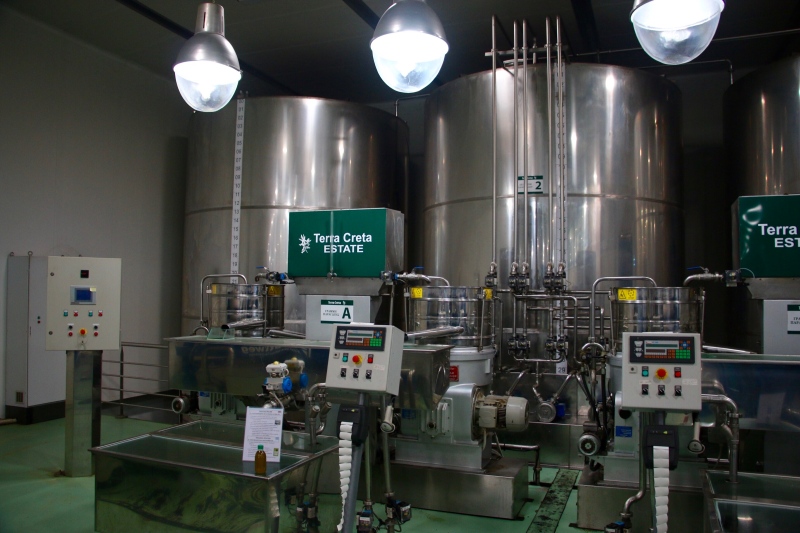 The oil is then stored in these massive vats until bottling.

We tasted the oils, which were all very good. In addition to their primary production line, they have an organic production line that never touches conventional olives. We both agreed that the organic wasn’t quite as good as the standard stuff. In the end we didn’t buy any oil, however, as the owner (I think?) declared that they just obtained a contract with Costco. So I’ll buy some when I get home. 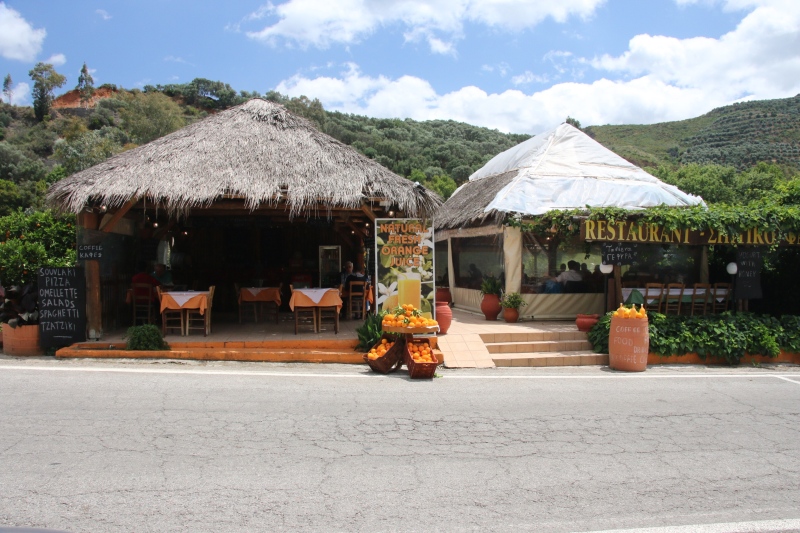 Done with this tour, we tried to go to the botanical gardens. As the crow flies, we should have made it without difficulty, but there are no straight roads in Crete, and as we got closer, we noted that our desire for lunch would conflict with an afternoon appointment. So we decided against the garden and ate instead. We randomly chose this taverna that we found at the side of the road. We were concerned about the vaguely “tiki” look, but it was really quite good, including the saganaki (fried cheese, but not flaming). 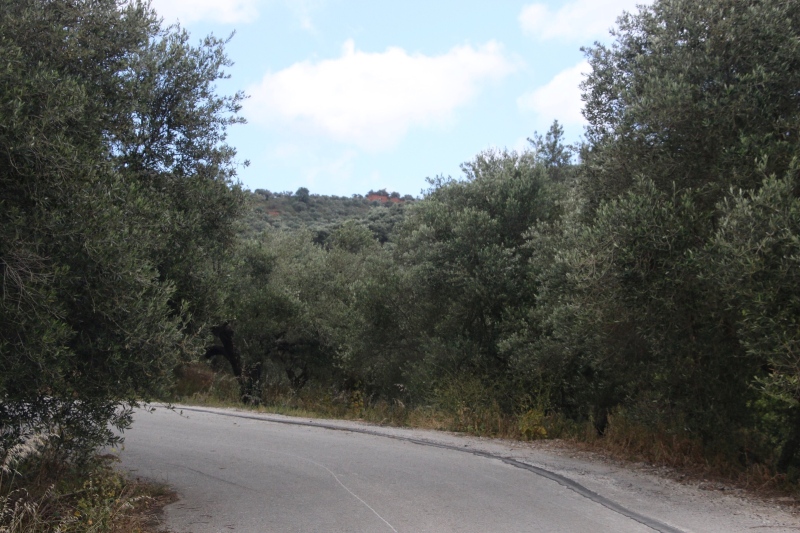 With time to spare, we hit the road. D and I discussed the options for routing, and decided on the scenic route. This was a route that took us high into the mountains, along one lane roads with hairpin turns, blind corners, and impinging trees. We descended precarious hills, and went up dangerous inclines. D was euphoric – this is his kind of driving.

D, by the way, has adopted local driving habits, such as driving on the shoulder and parking with half the car on the sidewalk. It can now honestly be stated that he drives like a Cretan.

The views high in the mountains were spectacular. We saw terracing everywhere, and imagined that some of it must date back millennia.

In addition to olive trees there were orange trees and occasional loquat trees. We stopped briefly under the branches of a loquat tree that extended its fruit-heavy branches well into the road. One of the fruits joined us in the car. It was wonderful.

We took a circuitous route, which meant that instead of driving for 40 minutes, we drove for 80 minutes, and arrived at the second olive oil producer, Biolea, a few minutes early. Their production starts much the same as this morning, with separation of the leaves. 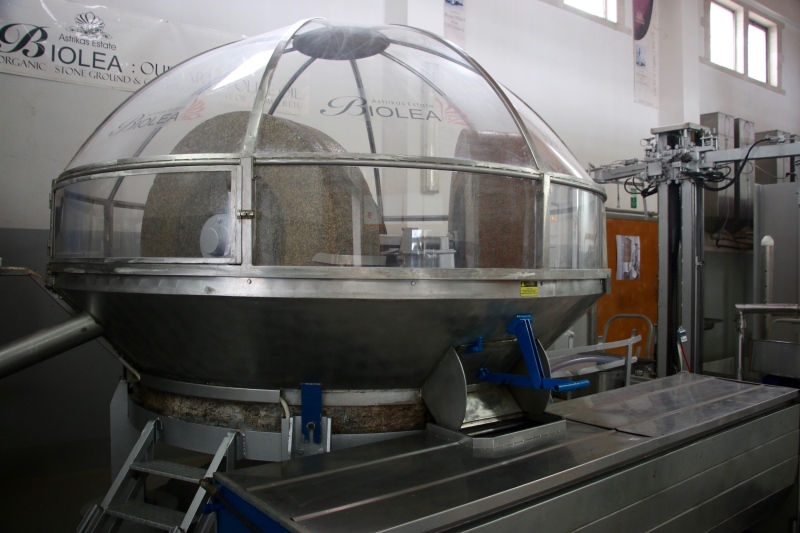 But the next step is very different, as they crush the olives using these massive stones, which is a very traditional technique. This doesn’t break the leaves or pits nearly as much, so results in a less bitter oil.

The slurry then is laid out on food grade plastic mats, and the oil pressed out.

The oil then separates naturally from the water, and is stored in these large vats until bottling

This oil was delicious, and is not as readily available at home. Zingermans had it at one time, but I no longer see it on their website, and the price was three times what the producer here was asking. So of course I bought plenty.

We returned to the hotel, and I went about searching for dinner. The hotel at which we are staying is on the beach and attracts a large number of British tourists. British sense of food being what it is, they naturally give every restaurant that serves anything remotely edible a 5 star rating. Our one meal in our hotel, which had the best reviews on the coast, was OK, but not our best meal, by far.

Jackpot: Frosini’s Garden. 10 miles away in the middle of nowhere.

The owner greeted us at the door and brought us homemade Raki and olives (from his own trees). As we ate, we discussed some basic similarities between this structure and the place we had eaten lunch. We now believe this is a common construction technique that isn’t as kitschy as it seemed at first glance. 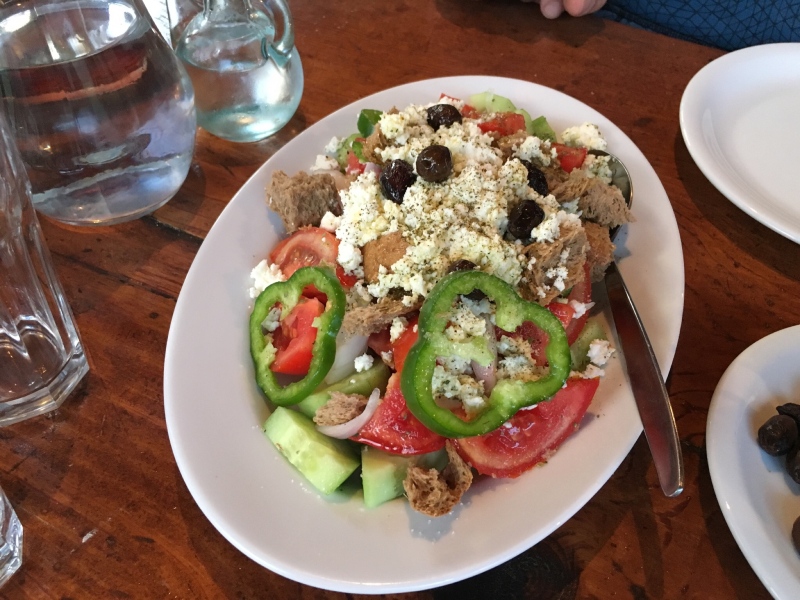 The owner returned for our order. As it turns out, there is no menu at Frosini’s. Instead, the owner just make suggestions based on what they have. Everything he serves comes from his own garden. Like this delicious Cretan Salad. See the mizithra cheese there? He said, “It’s very good. I made it this morning. I make a kilo each day.” And he was right.

The moussaka had been cooking for hours, and was honestly the best I’ve ever had. It was delicate and balanced. D felt the same about his pork in orange sauce. I tasted a bite, but it was good enough that he really didn’t want to share.

A light dessert here, as elsewhere in Greece, seems to be complimentary. In this case, it was an orange cake.

On the way out, we spied the outdoor open-air kitchen with wood fired oven and thanked the cooks for such an amazing meal.

With that our long final day on Crete was done, and we sped off along the dark serpentine roads of the island, mentally preparing for our flight to Athens in the morning, and reflecting on our meal. It truly was special. If you’re reading this right now, you should make plans for a trip to Crete. A meal at Frosini’s will be worth it!

One thought on “Eating In the Garden”