Well, we made it. We had to get up at an ungodly hour this morning, but we caught the 625 am flight out of Chania to Athens. The only hiccough arose when we arrived at the new hotel and our room (prepaid for early arrival) wasn’t ready. Instead we ate breakfast in the lobby and sulked while they prepared it.

In due time, we were checked in, cleaned up, and on our way into the center of Athens. We had to take the subway in, and at the station we found this old drainage pipe that had been uncovered when building the system. This is 2000 years old, and still has running water. Cool!

That was merely a prelude to what was to come. As soon as we stepped out of the subway, this is what we saw.

We both gazed skyward, thinking, “Boy is it a long way up there!” D asked whether we would be climbing it, or whether there was perhaps a funicular.  There is no train, this would be all on foot. 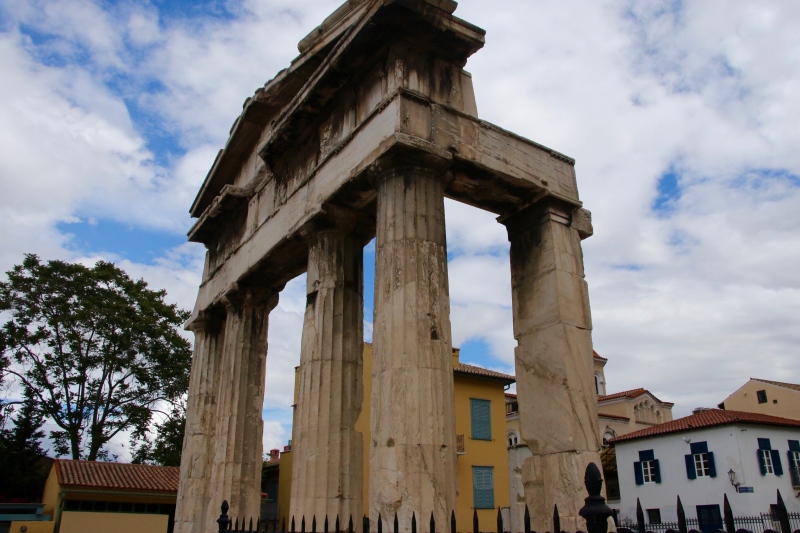 Following a brief lunch, we steeled our courage and headed toward the mound of rock that was our objective, promptly coming to the Roman Agora. This was good, because we needed tickets. Purchasing them, I asked how to get to The Acropolis, and the woman at the counter said, pointing distractedly, “you go that way, and just keep going up, up!”

And so, up we went, without even visiting the agora.

And up some more.

This came into view – the remarkable Temple of Hephaestus.

But still we went higher, the olive trees gathering around us again, enrobing us in cooling shade, while the sounds of the city below us gradually faded.

The trees broke and we found spread out below us the Odeon of Herodes Atticus. This theater was completed in 161 AD and renovated in 1955. It was constructed during the Roman era, but it was built against the mountain in the Greek style, similar to the theaters we saw in Turkey. The back wall that we see here (behind the stage) wasn’t intact in those theaters.

Today this theater is used for performances during the summer months. I find mention both of musical performances, but also of Classical Greek theater. I can only imagine how it must feel, as the hot summer day draws down to a sultry evening, to be sitting in these seats and listening to music in such an elegant venue, with the sun dropping low in the sky and the Aegean Sea visible in the distance.

A reason to return!

We resumed our mission, and continued yet further upward. Our footsteps hugged tightly to a stone wall on our right hand, so we didn’t even see where we were until suddenly we had arrived at the Propylea, the gateway to The Acropolis.

The Brandenburg gate is a mere copy of this. Walking through the gate we turned to marvel at it’s grandeur. 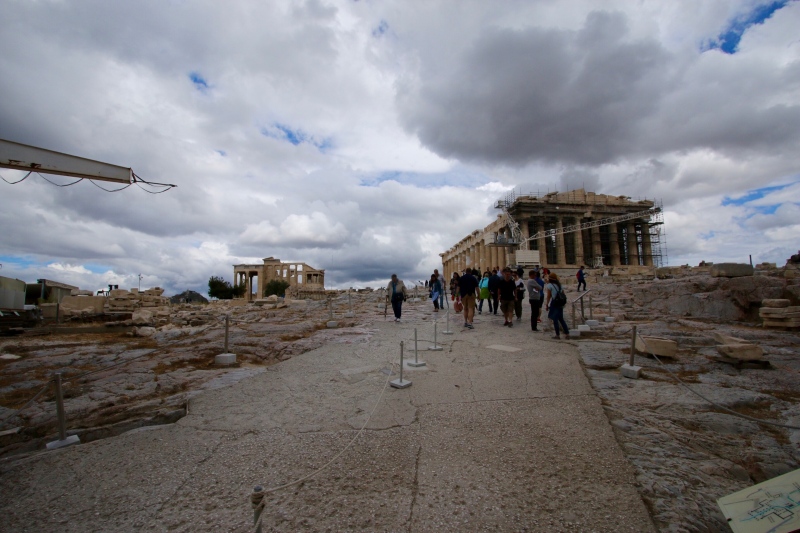 There used to be numerous buildings up here, covering this hilltop, however today only a few remain.

The first, and most well known is the Parthenon. A temple to Athena, it was completed in 438 BC, and stood proudly until 1687 when the Ottomans were using it to store gunpowder and it was hit by a Venetian cannonball. They’re yet again in the process of restoring it. 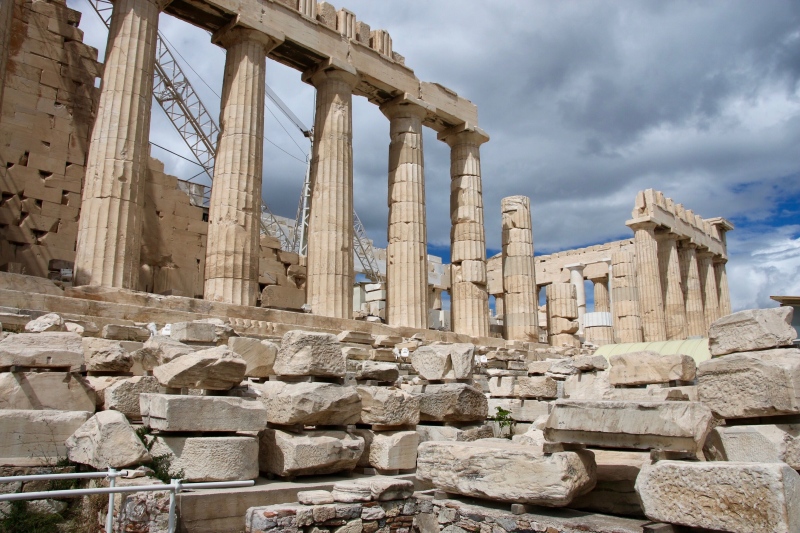 I don’t understand why anybody would store gunpowder here.

We linger in the area, circling the Parthenon, basking in its wondrous beauty. Men made this. Thousands of years ago they put hammer to chisel to stone and made this. The thought of doing so boggles the mind. The possibility is beyond comprehension.

Yet they did so.

These sculptures at the end are but a small fragment of the massive sculptures that marked each end of the building. The originals have all been removed for safe keeping. Some are in the Acropolis Museum, nearby. Most of them, however, are a long way away in the British Museum of Plunder in London. I saw them many years ago in a visit there. 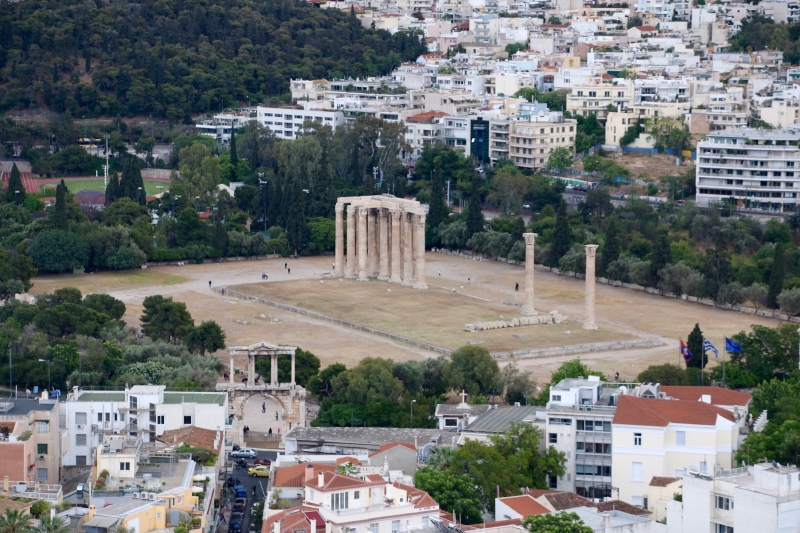 The view from the Acropolis, by the way, is amazing. These are the remains of the Temple of Zeus.

And this is the world’s only stadium built entirely of marble. It was reconstructed from the remains of an ancient stadium and was used for the first modern Olympic Games. This is where they light the Olympic torch. 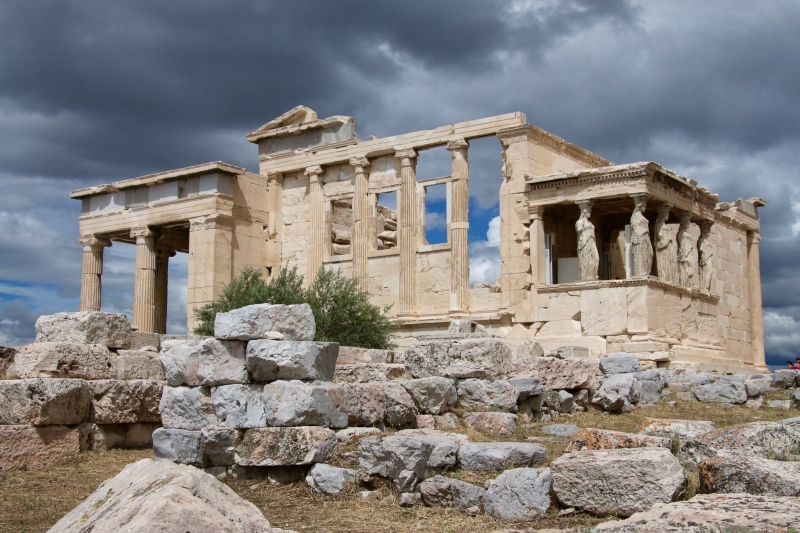 We walked to the opposite side of The Acropolis to where the Erecthion has been rebuilt. This temple dates back to 421 BC, and was originally dedicated to Athena and Poseidon.

It is best known for the six Caryatids, or female statue columns, on the south porch. One of these is in London as well.

We sat for a while, breathing in the Greek air as the sky sputtered with intermittent drops of rain. Finally, my shoes covered with the dust of the Ancients, we concluded our visit and headed back downward, turning our steps toward the Ancient Greek Agora, where the Ancient Greek philosophers taught.

As we passed through the gate to the the Acropolis we turned back to capture one last look at the small, graceful, Temple of Athena Nike floating above.

And then we continued on.