I have seen most of the tourist’s Bologna, but somehow missed this: the museum of Bolognese history. I had one real objective here today, which was to eat Lunch at Tamburini. Therefore I had to find a way to pass the morning until said goal could be accomplished.

So I started with a late breakfast at the hotel and after checking out headed out into the golden morning that dappled the city today.

The route I took wasn’t direct, wending along side streets, past small churches, 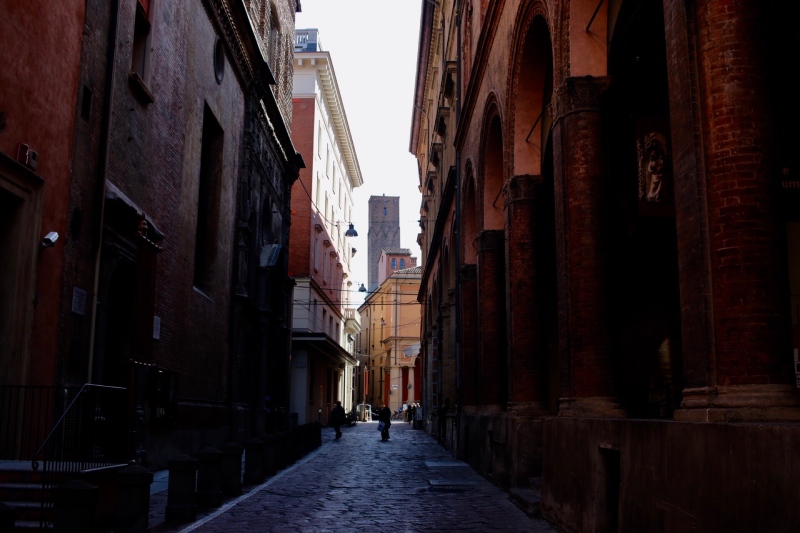 And through the glittering sunbeams coming from the eastern sky. 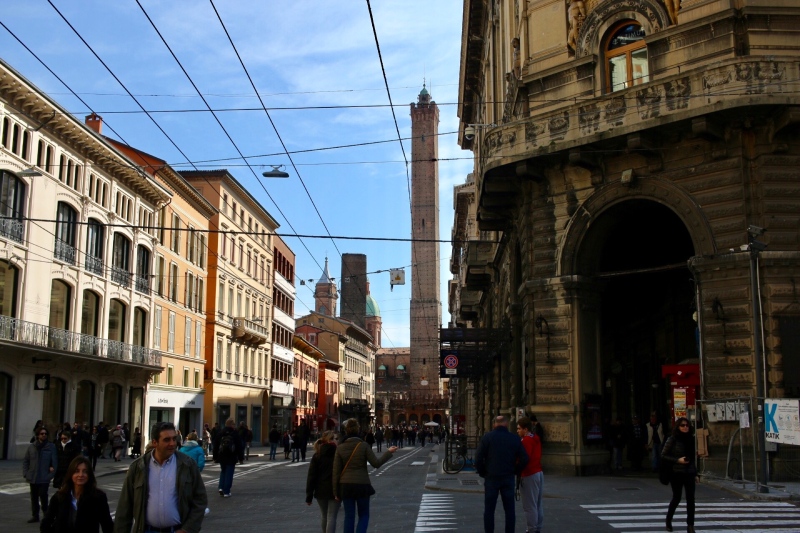 In due course, the two towers came into view, dominating the skyline above me. I know I post many pictures of them, and really I can’t help it. They’re iconic and simply can’t be avoided.

I passed through the old streets of the quadrilatero, some of the oldest in the city, where the food vendors work, eventually finding the museum of Bolognese history.

Within the museum, the tour starts with an ancient Etruscan road, bedecked with headstones.

In the room beyond, the course of history moves forward. Mostly the signs are in Italian, but in many rooms, there is a tower offering printed translations in different languages. These were helpful when present, but sadly the English translation was often missing. 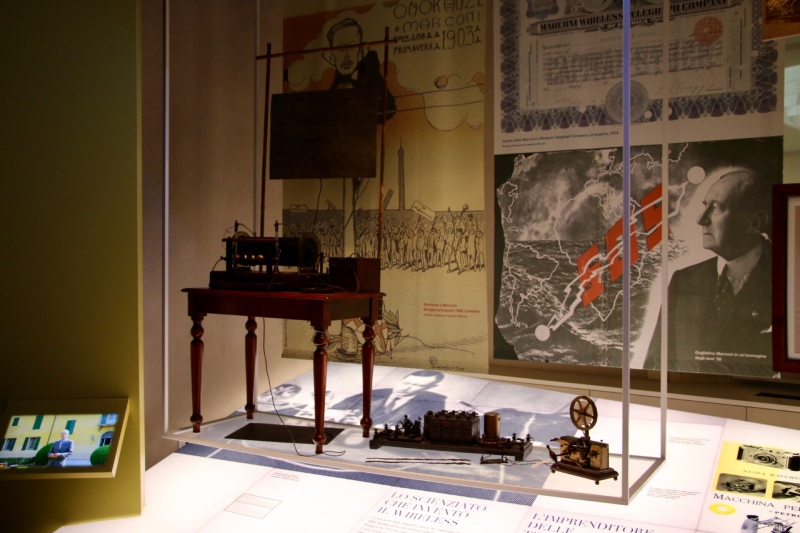 In the 20th century there was a display about Marconi inventing the radio.

Beyond that, the tour came to a dead end, as the path was closed, and I had to double back to find my way out.

With that, noon had come, and I found myself at the Tamburini lunch counter, where I had hoped to have roast pork and potatoes. The former was not to be had, so instead I had kabobs of pork, a mixture of pieces of pork on a skewer, including pancetta and sausage.

Following lunch I returned to my hotel, collected my bags, and headed across the street to the train station. It has been years since I have spent much time in the Bologna train station, and it has been expanded with a large, modern, underground portion. My train arrived with silence that reminded me of the Shinkansen, but not nearly as fast or efficient, and with that I was headed toward the Northeast.

I slept most of the trip, waking just before our arrival in Milan, where I changed trains to head south. I slept much of this leg as well. Looking at the clock, our arrival time was approaching, but out the windows was only the darkness of a tunnel. Still, people around me were milling, so I collected my bags, and immediately beyond the tunnel the train stopped and we were in Genoa. I transferred to the metro there, and two stops later was met by my AirBnB host, Ivo.

Ivo is a middle aged gentleman, originally from Macedonia, who has lived across Europe and has been living in Genoa for 14 years now. He lives in the Centro Storico, or historic center, and met me at the metro station as his home can be difficult to find. With Ivo leading the way, we dive into a maze of impossibly narrow streets and alleys, which periodically open into diminutive piazze. 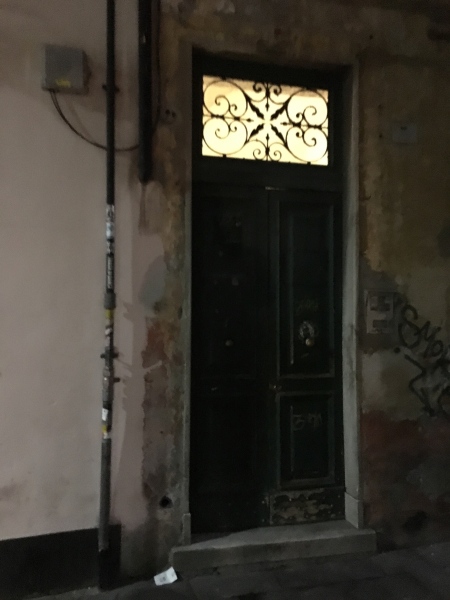 After numerous disorienting turns, we arrived at a large green door set in a crumbling wall laden with graffiti, and head up the equivalent of 5 flights of stairs to his eclectically decorated apartment. I had expected at this point to start exploring, but instead we sat and spoke for quite a long time, as he talked about the history of Genoa and his neighborhood. He pointed out that this is a first stop for many African refugees on their way to Northern Europe. Also, he stated that prostitution is legal here, but the prostitutes must be off of the street by 8 pm. He expressed concerns about gentrification, as the neighborhood is growing ever mor trendy. And finally he made some dinner suggestions, as the hour had grown dark, and I was hungry. He pointed out that this was Sunday, so much would be closed. 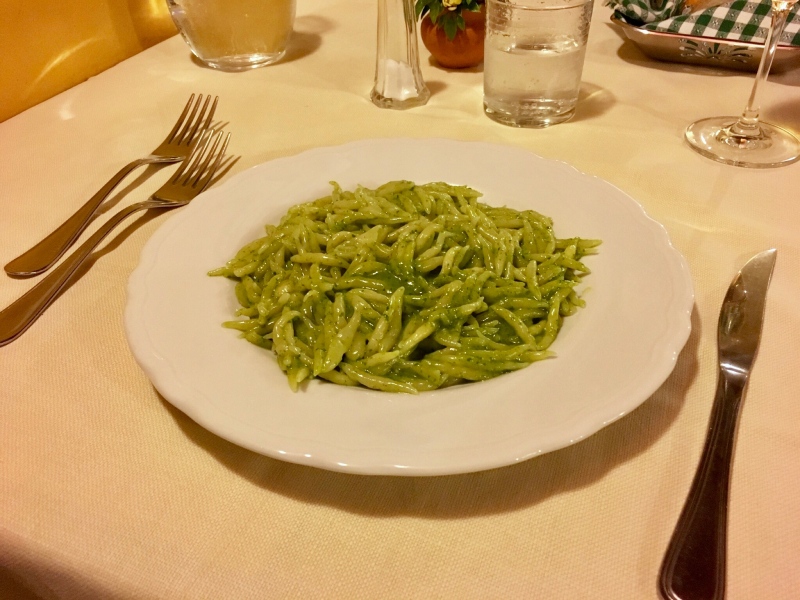 Finally, he sent me out the door to eat, reassuring me, “Don’t be scared. It’s safe. You’ll be fine.” And with that I was alone in the Genovese night, searching for pesto, more precisely known as Pesto alla Genovese. When I eventually found it, it was revelatory, nothing like we get at home. I think, at home, I will always be searching for this dish. It will haunt me.