The last 500 feet up were brutal, which is saying a lot because the entire ascent to Warmiwanusca, or Dead Woman’s Pass, was grueling to the extreme. As we reached the summit, the air grew thinner, the oxygen sparer, and our footsteps heavier. We worked our lungs to their maximum capacity, our hearts pounded violently, and we had to pause periodically.

9,800 feet. This is where we started the day before dawn even broke over our campsite. At 7am the sun was up and we headed out along a muddy path and soon were moving upward again. A mere 150 feet of elevation further and we had reached a checkpoint for people entering the next part of the Inca trail. Sweating already, I used this pause to shed my light jacket. 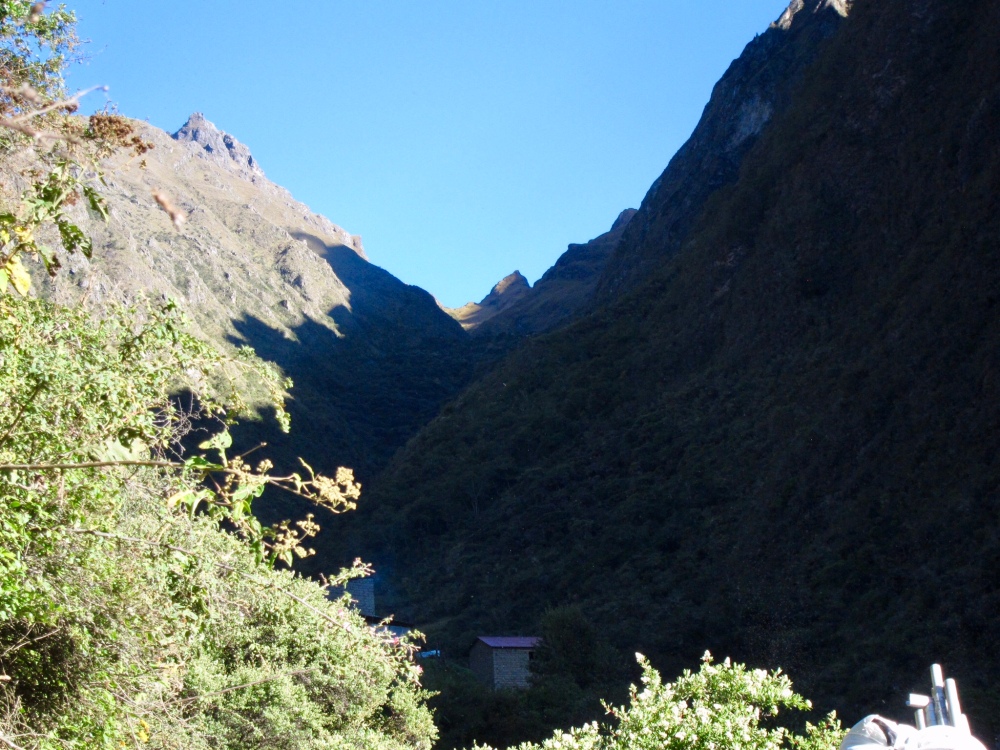 As we returned to the trail, the guides pointed out our destination. This large promontory, which they likened to a woman’s breast, was the location of the pass. I couldn’t decide whether or not it looked nearer than I expected. 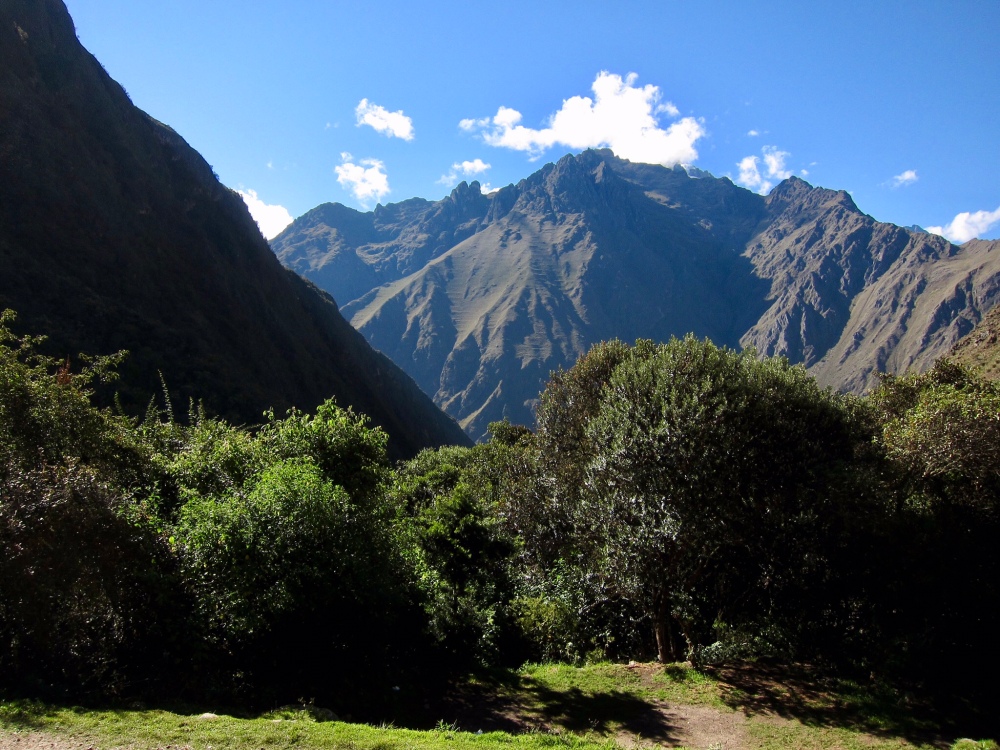 Two hours later, at 8:50, we were at 10,950 feet. Basically we had ascended 1000 feet in two hours. The sun was mercilessly glaring down as we paused for a break, eating fresh passionfruit and admiring the surrounding mountains. At this point I removed the bottom half of my hiking pants and converted them into shorts. Strangely I am the only one who does this.

We continued ever upward, now well into the cloud forest (here it is cloud forest, rather than rain forest), with mosses covering trees. 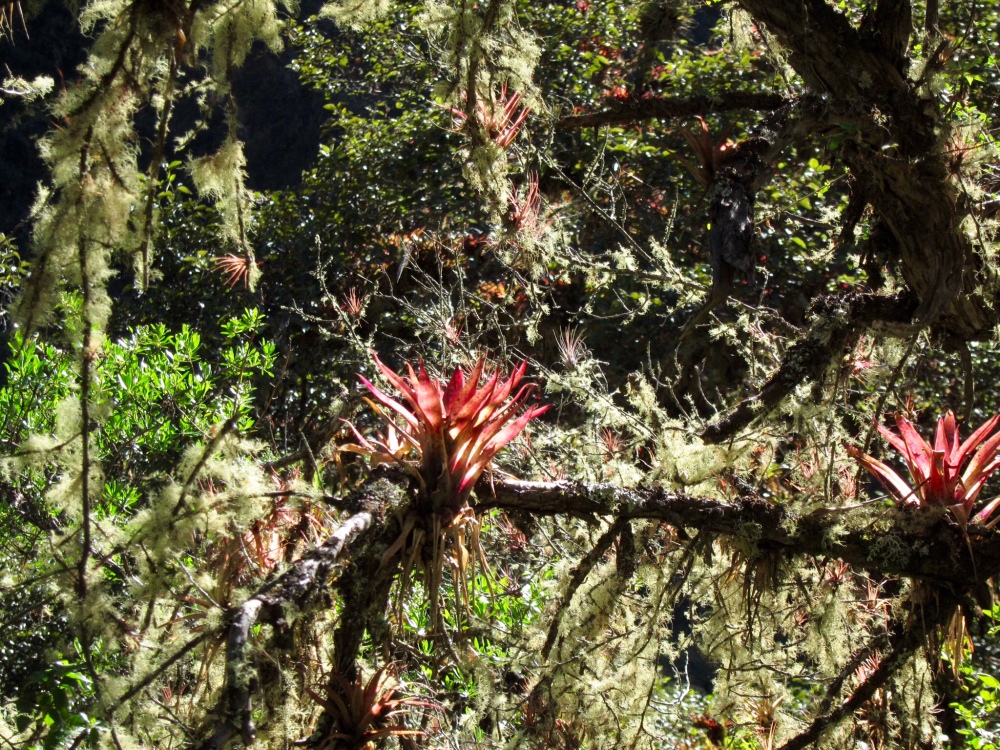 And steps. Lots of steps. We pause sometimes to rest our weary bodies, sitting to the side of the trail as porters pass us by.

At about 1045 we stopped for lunch, and my altimeter told me we were at about 12,600 feet. Lunch today included these chips with guacamole, as well as a pasta. They are loading us with carbohydrates, it seems.

After eating, I had a late start leaving, so hurried up to catch up to some of our group. Hurrying to do anything at altitude is almost never a good idea, as our guides often remind us. Instead they instruct us to just keep moving at our own pace. Fortunately we were soon stopping again to rest, and I was happy to do so.

For the first couple of breaks after lunch, there seemed to be a pattern of needing to pause every 250 feet gained, but this would not continue. Soon we were at 200 feet. Then 100 feet. And still we struggled forward.

With each break, we panted and looked at each other, marveling at the rare porter passing us by. We stared behind, across, and ahead. Were we getting any closer at all?

Finally, with 150 feet left to climb we dug deep. When our muscles burned, we pushed harder, and when our lungs ached we panted faster. Our goal in sight we would not pause, we would not stop. We were well past the point of turning back.

And jubilantly we left the last of the steps behind us and shared congratulations with our campmates. This was a time of accomplishment, but not for only us.

Other hikers, both teammates and strangers, were still on their way, struggling to navigate the pass. As soon as they came in sight we yelled out our support.

We had come so far today. We had climbed 4000 feet, at altitude, something I hadn’t been certain I could do. By the end, we had essentially lost more than a third of the oxygen we enjoy at sea level. See that valley in the picture above? The little pale spot in the center was where we had started this morning.

Once we were all together, we took some photographs and looked to the trail ahead. The second day of the Camino del Inca lacks any Inca ruins to explore, but has two distinct challenges. We had conquered the first by completing the climb, but the steps down are notoriously demanding.

And indeed they were, but I was driven. When our group leader told some of us to go ahead, promising to catch up, I wanted to make that difficult for him. I have spent the last year and a half on a program of intense exercise, and this trek, particularly in today’s severe conditions, somewhere in my mind represented a culmination of all of that training.

So I scampered off down the hill, skipping from irregular stone to irregular stone, down cantilevered and precipitous steps. There was nothing consistent about any of the footing I encountered, but I kept going, pausing only rarely to glance around. The first half of the day was a test of endurance, but this was a test of agility. And the entirety is a test of mental toughness.

Behind me hazardous steps disappeared in the distance.

And lines of hikers stretched to the horizon.

As I moved along, I met up with and eventually abandoned some of my teammates, enjoying a steady but hurried pace. The beauty of my surroundings garnered only brief attention. While others took in the local flora and fauna, this was not my mission today. My urgency came from another place. 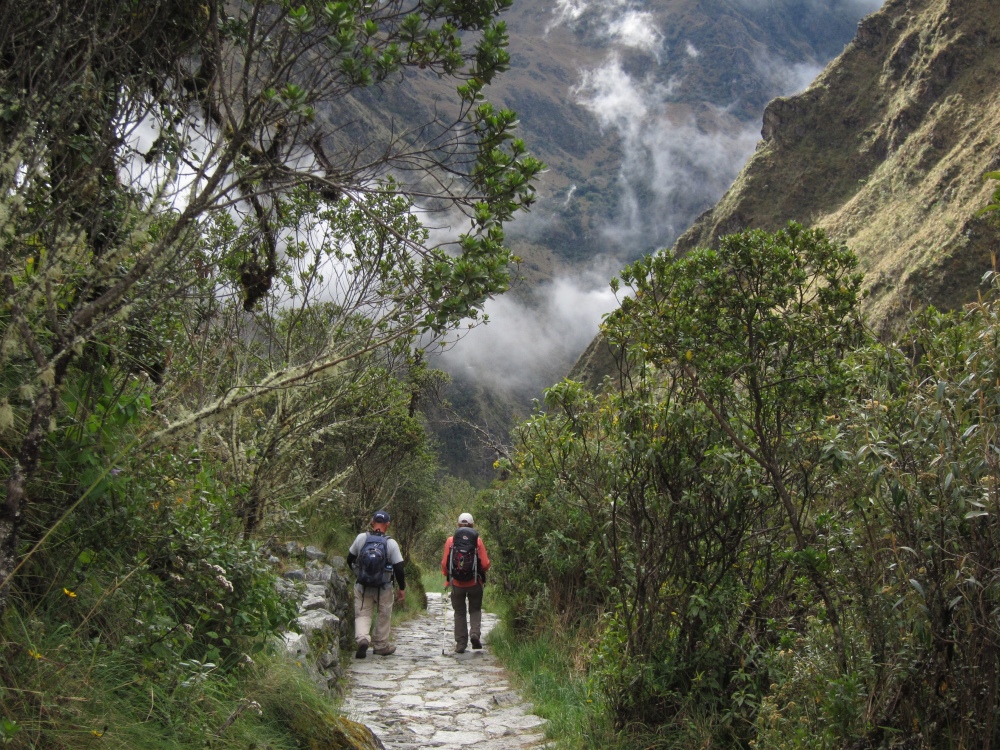 Finally, near the end of the day’s march, I slowed to speak with another hiker who was visiting from Australia. It was apparently sometime around this point that our guide reported catching up to me, although I never saw him. After confirming my safety, he must have turned around to return to the rest of the group.

I arrived at basecamp 10 minutes before the next team member. The jubilant porters were confused and disappointed when I explained to them in broken Spanish that they shouldn’t wait for the next group (don’t worry – the porters reassemble on demand). The final team member, who admittedly took his time to enjoy the walk, strolled in an hour later.

For me, today wasn’t about the Inca Trail. Today, things got personal, and it was about me pushing myself and succeeding. This was one of the most difficult physical tasks I have ever accomplished.

Did I miss something by not going slower? Perhaps. But this was the victory I wanted and it was the victory I got. I know that it wasn’t a race, but somewhere in my mind I felt like it was. Perhaps I was racing myself.