There’s something about waking up among the clouds. You look out of your tent and see the clouds spread out around you in big puffs of cotton. It’s mystical.

And when you spend the day in the clouds, there is a feeling of sublime anticipation. The day is never quite the same, as minute to minute mists drift in and out in nebulous shapes and fingers. It’s almost surprising the first time you realize that your eyes are not deceiving you and the wispy tentacles of haze really are creeping in amongst you. And then it’s magical.

The world is ethereal. Things around you may be visible one moment and gone the next. No vista is the same twice.

We started at 11,800 feet, and first descended a bit, looking back after 45 minutes to see Warmiwanusca and the namesake of Dead Woman’s Pass. If you look at this picture perhaps you can see the silhouette of a woman in repose. Don’t worry – it took me some time, too.

We continued on to the ruin of Runkarakay, which, like many Incan structures, has a history obfuscated by time. The Incan language of Quechua wasn’t written down until they adopted the Latin alphabet from the Spanish invaders, so we are left to guess whether this was perhaps a watchtower, a guest house for pilgrims, or a waystation for messengers.

And then we began our day’s ascent, toward our second summit of the trip. Behind us Runkarakay drifted in and out of view.

Today’s summit was a mere 13,000 feet, and felt substantially easier than yesterday’s as we only had about 1,000 feet to climb in total. On the way up we saw this small “lagoon” that was substantially creepier on first view when its outline was barely visible. Somewhere in my mind, the lurking vapors obscured a threat, and it was best not to disturb the waters.

As we continued our ascent, the clouds again drifted briefly away to reveal its mirrored surface in its entirety, without threat of danger.

At the summit, we took a brief rest and a snack before moving on. The tour company is providing us with plenty of snacks every morning. Today I had the best Brazil nuts of my life. I don’t now what we get in the US but they’re simply terrible by comparison. There are usually options of chocolate and dried fruit as well. I always take chocolate when it is offered. Always.

After our brief respite we once again begin a steep descent. I have no urgency today, and just enjoy a leisurely stroll downward with my friends. Somewhere along the way one of our group fell and frightened us all. Fortunately he fell into the turf adjacent to the steps and there were no injuries to anything more substantial than his ego, so we all breathed a sigh of relief.

Today I took the time to notice some of the flora and fauna around us. This is such a remarkable part of our world, and the things I see here are so very unique. Such as these lady slipper flowers. 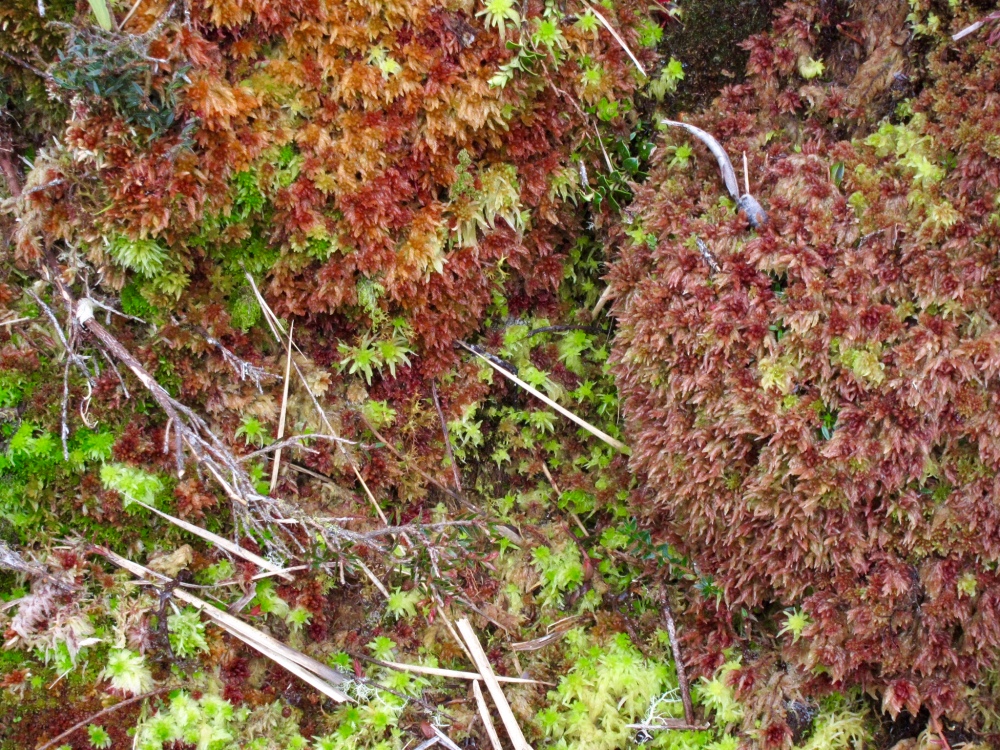 Or these mosses in shades of red and green and gold, which absorb and hold onto moisture whenever it comes along, to last through the desiccating dry months that lie just ahead. 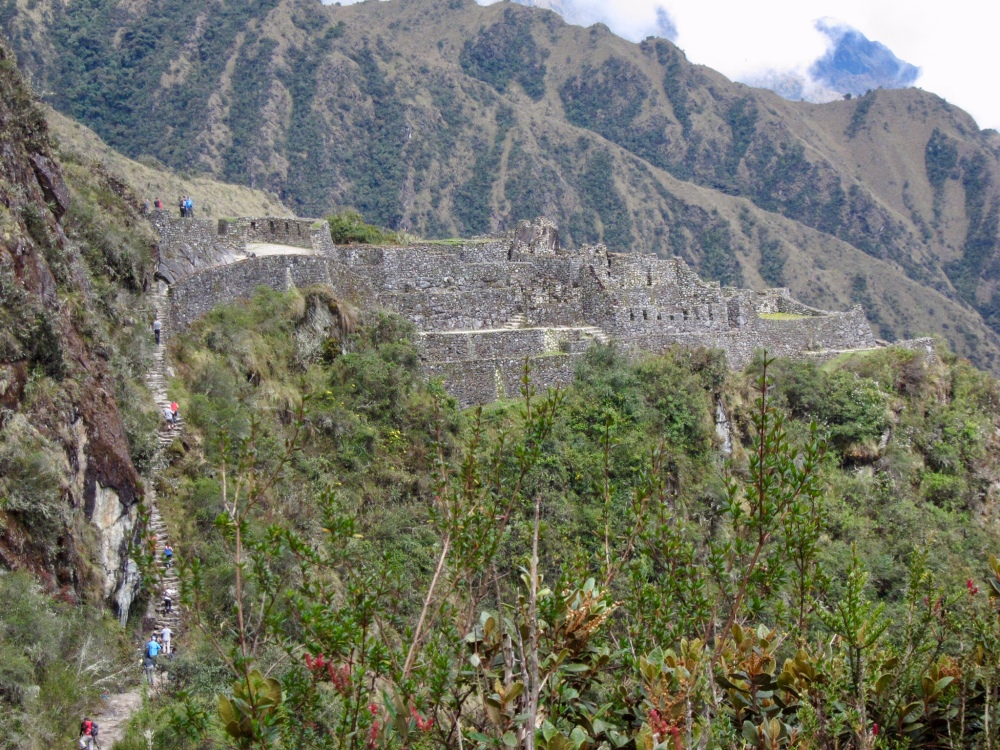 We stopped at the stunning ruins of Sayaqmarka, perched on a hill at the end of a steep climb, they overlook a wide valley on three sides. This town was the home to a small complement of 200 people, but had a temple to the sun and an elaborate water supply. This is another site that probably served as a resting point for travelers. 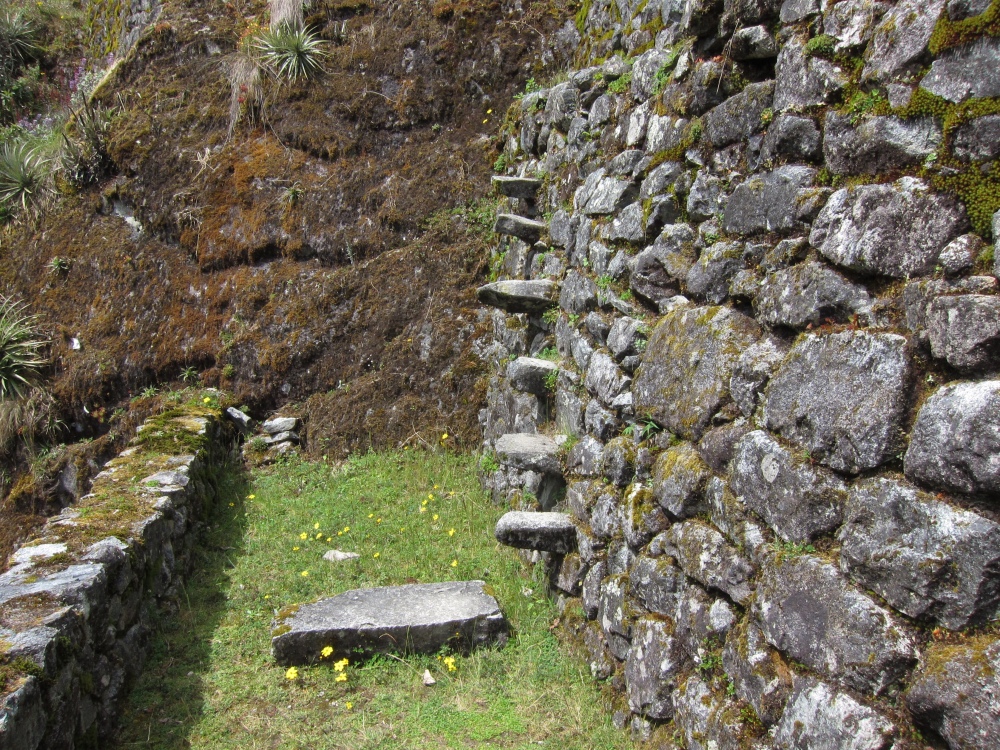 I explored the ruins, climbing the floating steps, which seem to fit the insubstantial world that surrounds them

On the hills around us there are hints of other trails, and our guide points out a barricaded staircase, stating that there are certainly numerous other Incan trails and ruins around this region just waiting to be explored. As they are discovered and the trails are cleared, it is hoped that they will be attractive to tourists just as the Camino del Inca is today.

For the afternoon our course was mostly flat, albeit still comprised of irregular stones that were at intervals slippery and unbalancing. In some places the path was carved right out of the bedrock of the mountain, and it is not fully understood how the Incas did this. These areas, incidentally, felt no more stable for us than the stone pathways, as their builders still found ways to minimize their navigability.

Early in the afternoon we arrived at our campsite, sitting at 12,000 feet above sea level, and more than 4,000 feet above Machu Picchu city, previously known as Aguas Calientes. The clouds parted briefly for us to view our hope. There, tomorrow night, we will find our beds. And showers, which we haven’t had for days now.

Below our campsite, hidden amid the haze we see the remains of the Incan city of Phuyupatamarka. Our porters hike down there to get water for us to drink (they boil it first). 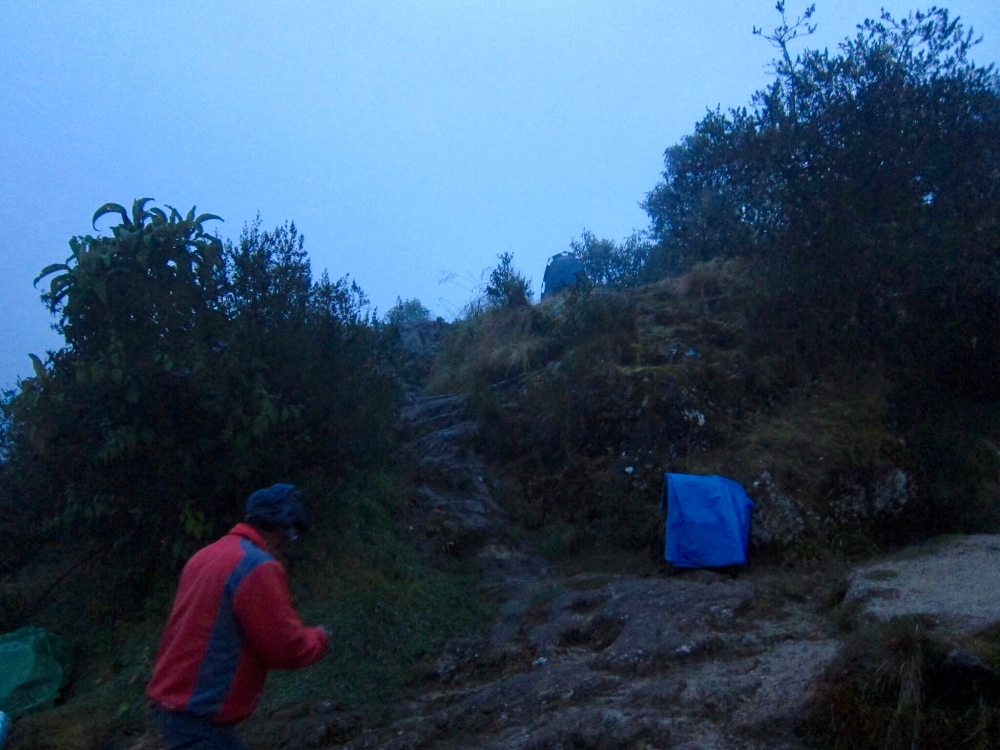 Our campsite this evening is laid out on multiple levels, as it has been every day, but tonight is the most extreme. Most bothersome is the location of the restrooms. Rather than use public restrooms (and squat toilets), our porters carry portable toilets for us. We are all happy about this. The first night the restrooms were easily accessible. The second night they were somewhat less convenient, but still nearby. Tonight they stand high on a hill requiring an agile climb to reach, and this will be even more difficult in the drifting obscurity.

I don’t like to have to find my hiking poles just to use the facilities.

The llamas that invaded our campsite didn’t have any of the issues we were having with the miasma or the footing.

We were surrounded by clouds upon arrival. And then for just a minute the clouds parted and we saw the back side of Machu Picchu mountain. Our ultimate destination lays that way.

And then the migratory mists returned again hiding our view of the mountain. 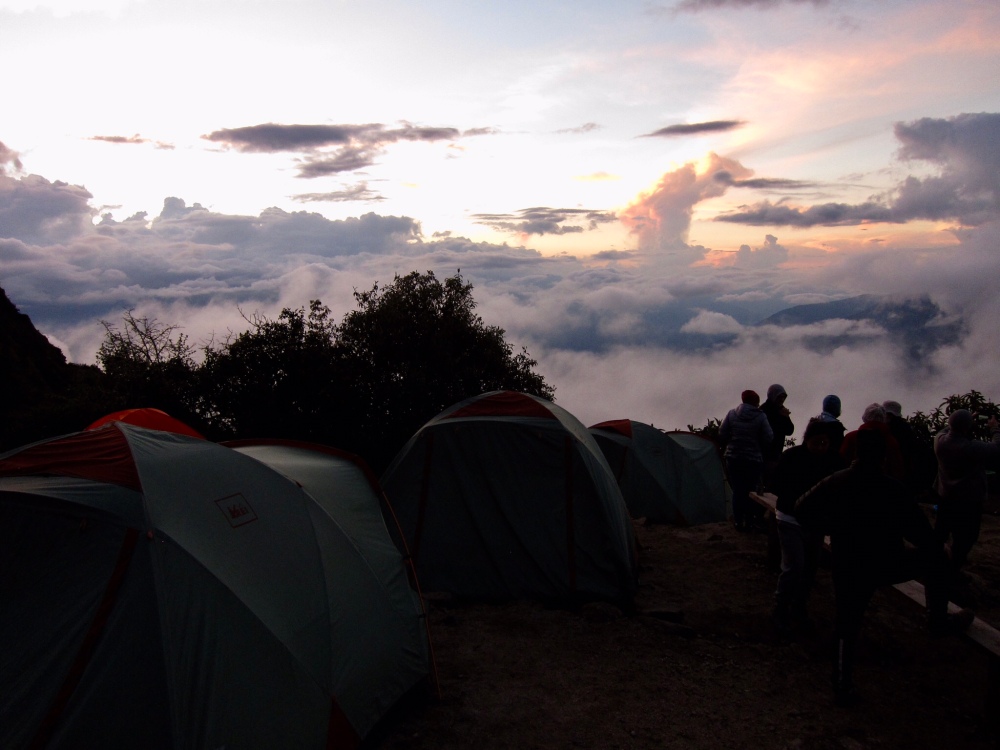 Today we woke above the clouds, and tonight we sleep among the clouds. Tomorrow we go to Machu Picchu, where we hope to find the sun.