This trip has been exhausting, and sometimes we need a down day.

If you aren’t convinced that I should be tired, I can explain. I left Detroit at 8 PM after a full day of work, and slept little over the course of a 17 hour trip to Kusadasi, and then was up early the next day and running. We have been up early every day since we arrived, active and on our feet, with little down time.

Today we tried to do the same, and just failed miserably. We rose, had a spectacular breakfast with the grand dome and graceful minarets of the Hagia Sophia visible out one window. Notably, Dan loved the yogurt soup so much that he didn’t notice the broccoli in it (and he usually hates broccoli). After eating, we returned to our room with no definite plan. Somewhere amidst our discussion of our options and the rainy weather, we both fell asleep.

So it was really much later and better rested that we finally stirred from our room and stepped foot into the venerable, craggy streets of Istanbul.

Neither of us was feeling ambitious, so Dan left me to find us a way to the spice market. I cautiously took the lead, guiding us north through the close-pressed streets, with buildings and people crowding in from all sides.

The first stop I needed to make was an ATM, which turned out to be a challenge. I’ve never had such difficulty using an ATM. The first bank machine I came to took my card and wouldn’t return it. I had to step inside to have it returned. The second machine didn’t function in English, even though it professed to do so. Only on the third attempt was I able to finally retrieve some lira.

We continued northward, the narrow paths feeling familiar to my feet, and my confidence gradually growing. Dan’s foot has been bothering him, so I checked the map often, as I really didn’t want to lead us in the wrong direction.

And at last we came to the door to the Spice Market. Upon entering, we walked immediately through a metal detector. I had an iPhone and a camera with me and didn’t set it off. The guard barely glanced at me as I passed by.

Within the market are stalls selling various spices and nuts, Turkish delight, tea, jewelry, and other miscellany. Often they are selling food-related items, although not necessarily.

Dan is turned off by the hawkers and really doesn’t want to engage them, so we walked through almost the entire market before stopping to look at something. When he is finally ready to speak to a vendor, it is to buy some of the incredible local hazelnuts, but he doesn’t negotiate for them at all. Given that the local custom virtually requires haggling over the price for things like this (something with which I’ve struggled in the past), the vendor is thoroughly disgusted by the course of events.

Back outside the spice market, we walk west, toward the Grand Bazaar, stopping occasionally to look at some of the fascinating food that we see. 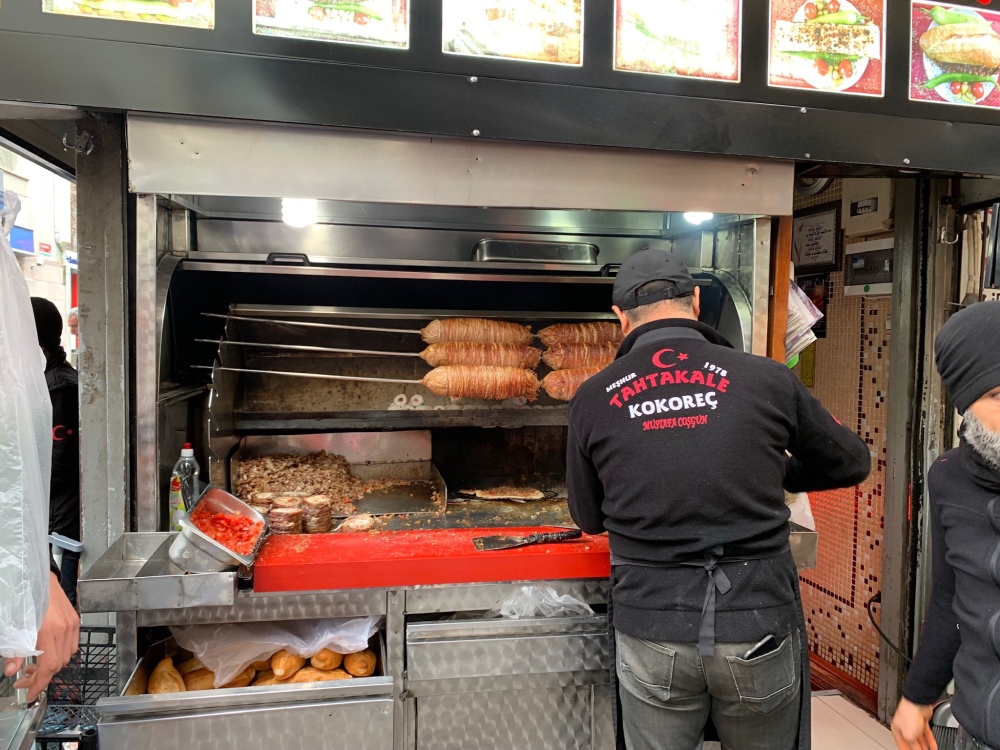 Neither of us can figure out what this is, but we are both enthralled. It looks delicious. Ultimately, whatever it is, the cook chops it up and wraps it into a sandwich using thin bread. I stare on, fascinated by the appearance, trying to figure out what it could possibly be. In the end, we are ready to buy one, and the only thing that keeps us from purchasing sandwiches for ourselves turns out to be a lack of seating. We would later learn that these are sweetbreads wrapped in intestines. Dan doesn’t actually like sweetbreads (or intestines), and upon learning this was pleased by our seeming misfortune. I, on the other hand, still want one.

Instead we stopped for beef doner sandwiches, and I had a glass of ayran. You can see the fresh ayran here – it’s a local yogurt drink made with water and a little salt. It is delicious, and I see it as a part of my personal goal to ply my system with gobs of probiotics.

Into the Grand Bazaar we go, once again passing through a placebo metal detector. This thing never goes off. I wonder if it is even plugged in. On some level I’m insulted that they don’t see us as a threat at all. 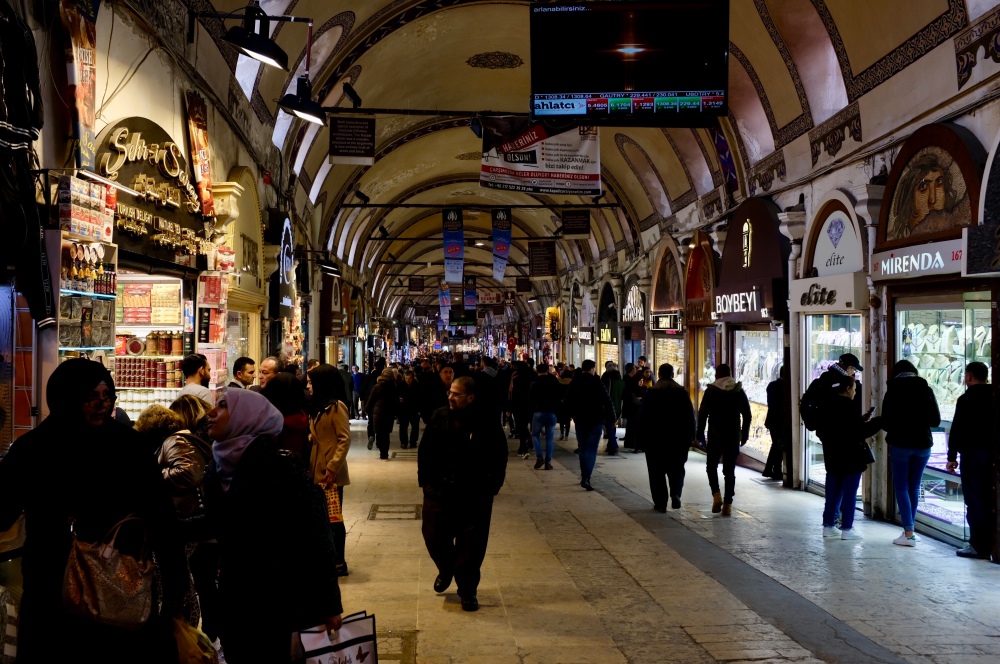 The Grand Bazaar is filled with infinite stalls of “stuff” that neither of us needs. I have a few purchases to make, mostly in the Spice Market, but unlike Dan fully intend to haggle. I’ve learned lessons over the years, and am still terrible at it, so I plan to wait my time. 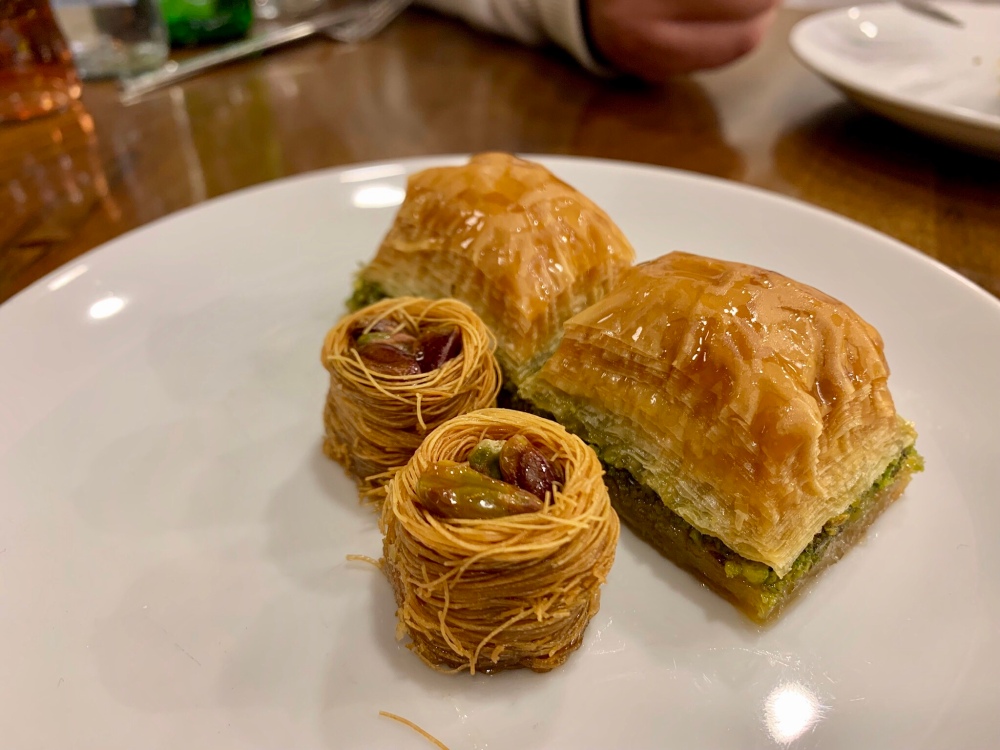 Just as we are about to give up on the Grand Bazaar, we find steps to a lower level, where negotiation is not a thing. Instead, here there is a restaurant, as well as a nice cafe. Dessert calls to us, so we head downstairs and enjoy a cappuccino and some baklava, considering our plans for the rest of the week. Before leaving, we both buy some treats to take home.

And then we both take a deep breath and dive back into the streets of Istanbul.