The Hagia Sophia is simply enormous. Entering, we step across the large, rutted marble threshold, which bears the attrition of millions of footsteps over tens of centuries, and the vast space opens up like a monumental breath. The sudden gush of air forces its way into our lungs like an atmosphere under too much pressure. I am scuba diving again and my regulator is free flowing.

The dome stretches high into the heavens, but just above our heads, not far from reach, hangs a meniscus of scalloped chandeliers, at once both insubstantial and ponderous, with their minimalist composition and heavy brass backbones. Pigeons cross the glowing plane of the lanterns insouciantly, but for those of us confined to the earthly plane the lights are stabilizing; they define the limits of our space. They are a barrier between the earth and the dome above, and they are an intersection, where the two realms meet.

For centuries this was the largest church in Christendom, until the Ottomans conquered Constantinople and and converted it into a mosque. It ultimately wasn’t surpassed in size for 1,000 years. Most recently, in the last century, Ataturk converted it into a museum (I’ve probably covered this before).

Duygu is our guide today; a friend of Yavuz’s from school, and she is awesome. Today is about seeing the historic peninsula, which Dan has never seen. The first thing she pointed out on entering Sultanahmet Square was the Milion Stone.

This, she said, was at one time considered the center of the world. It stands today as a mere remnant of a massive arch that once marked the distances from Constantinople to other cities in the Byzantine Empire.

She leads us down the stairs into the Basilica Cistern. Once again we pass a metal detector, but this time it is active, and instead of hearing silence, the small electronic archway alarms indicating that we are a threat. The guard indifferently steps forward and waves the wand against my front, back, and camera case, at which point the wand beeps happily and red lights flash excitedly. The guard seems satisfied and waves us on without further investigation. Mentally I pause at this, and silently I wonder what one has to do here to actually have their bags inspected (not that I really want that). 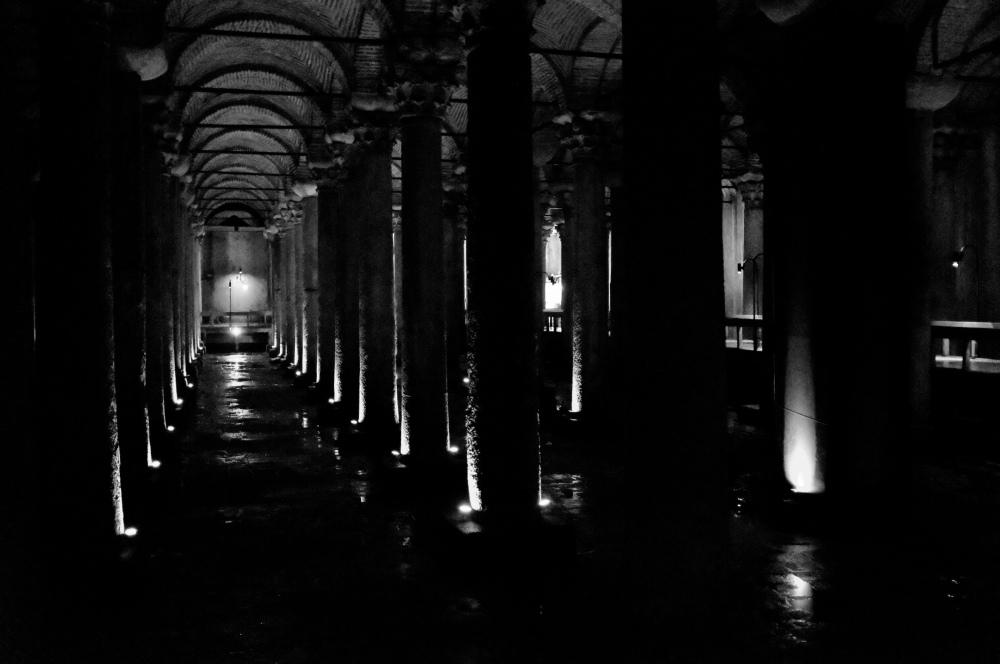 We descend to the depths of the cistern, once a critical element of this city’s water supply. Great columns come into view, encircling us. The last time I was here, the floor of the cistern was filled with water and fish, but today the floor is dry, as they are performing maintenance, so have drained it. The lack of water does little to alter the otherworldly nature of the place.

We explore the path to the back of the cistern, and come upon a wet, algae covered column carved with strange serpentine lines and ovoid symbols. This is the hen’s eye, or weeping column. The tears, both figurative and literal, represent the 7,000 slaves who worked to build this place, among whom hundreds died in the process. Duygu points to a large hole in the column and states that if one can place a thumb in the hole and rotate their hand 360 degrees that they will get a wish.

Apparently people struggle with this, but I instinctively know the trick. I turn away from the column and insert my thumb, then proceed to rotate my entire body back toward the column, my hand circling my thumb in the process. It is easy (I know my readers are thinking about this and trying to visualize what I have done – trust me). Our guide seems surprised at the ease with which I have performed this task. She doesn’t know that my job sometimes demands such knowledge (weird though it may seem).

Further back in the cistern we visit the Medusa heads, laying upside down and sideways. Duygu says they are oriented this way because the ancients believed that they could turn people to stone if oriented naturally. I’m posting this for you again because the image is as striking now as it was three years ago. Also, my new camera is better in low light than my prior camera was, so this picture is better. 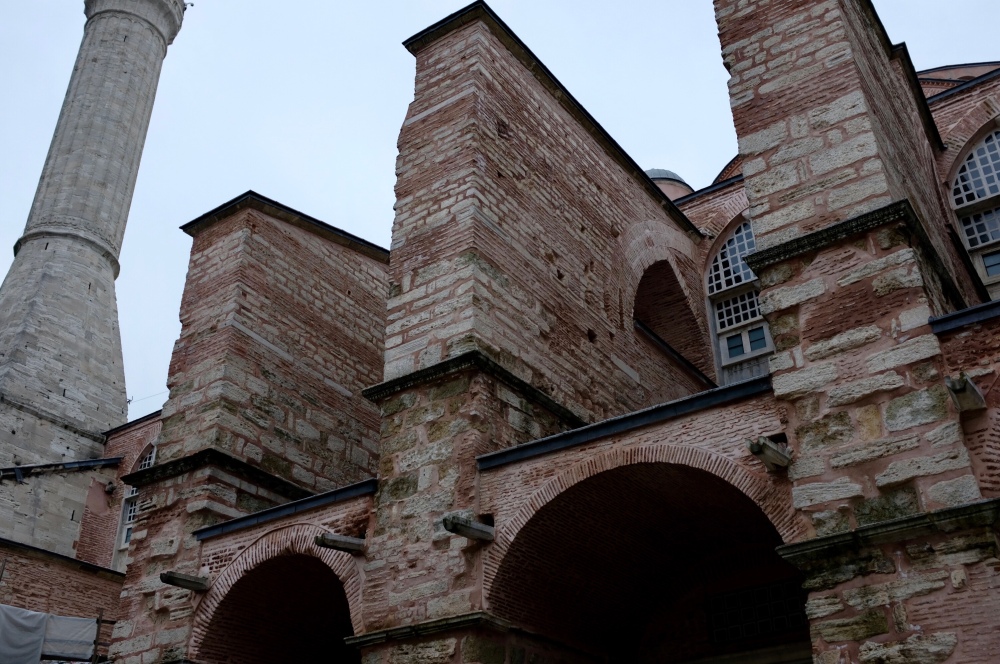 It was only after this that we went to the Hagia Sophia. I didn’t have a guide last time, so missed a few things that Duygu pointed out. These buttresses, for example, are not original. The dome has collapsed in the past, so the great Ottoman architect Mimar Sinan, whose works embellish this great city, added them to stabilize the structure.

The mosaics here are as wondrous as I remember, with a nuance and attention to detail that are unmatched. Not only have we seen their like here, but we have also seen similar techniques in Ravenna. That city was briefly a capital of the collapsing Roman Empire, and artisans traveled there from Byzantium, which explains the Byzantine style of mosaic work there.

Dan’s right leg is a problem, and I don’t know how to help him exactly. He broke the left leg last May, and that is now healed and doing well. I think that along the way he strained the right by compensating, which then has led to rest and disuse, the entire process becoming a vicious cycle. Istanbul is harder than the coast because the streets here are hilly, and any downward steps or slopes cause pain. Last night he had a massage at the Turkish bath in the basement of the hotel, which seems to have helped, but that only goes so far. What he isn’t getting is the time that this will take to recover, although we both think the movement is ultimately good, albeit challenging.

I know it’s worrying him, and he is very conscious of it – but it’s not bothering me at all. I’m more concerned that I’m pushing him too hard (I can be a merciless travel companion), so maybe we’ve got a therapeutic balance. He is going for another massage tonight. The masseuse there seems to know what he is doing.

Some things are working out really well in this regard. The Blue Mosque, sitting across Sultanahmet Square from the Hagia Sophia is closed for renovations, so there’s no reason to haul ourselves the long distance across the square to see it. And the grounds of the Topkapi Palace are large, but I really don’t care to see them again, having seen them once already. I know that Dan won’t enjoy it anyway (Duygu validates my feelings on this, stating that Americans don’t seem to like going there).

Instead we board a tram to the other side of the Golden Horn (an inlet that separates the historic peninsula from the rest of the European side), where we take the funicular up to Iskital street, which we follow down to the Galata Tower. We have lunch in a neighboring building before queuing up for the tower. Dan and I discuss this, and once again, as was the case three years ago, I decline to ascend to the top. In this case, the view isn’t worth the wait to me. Neither of us thinks it will be much better than we just had at lunch. 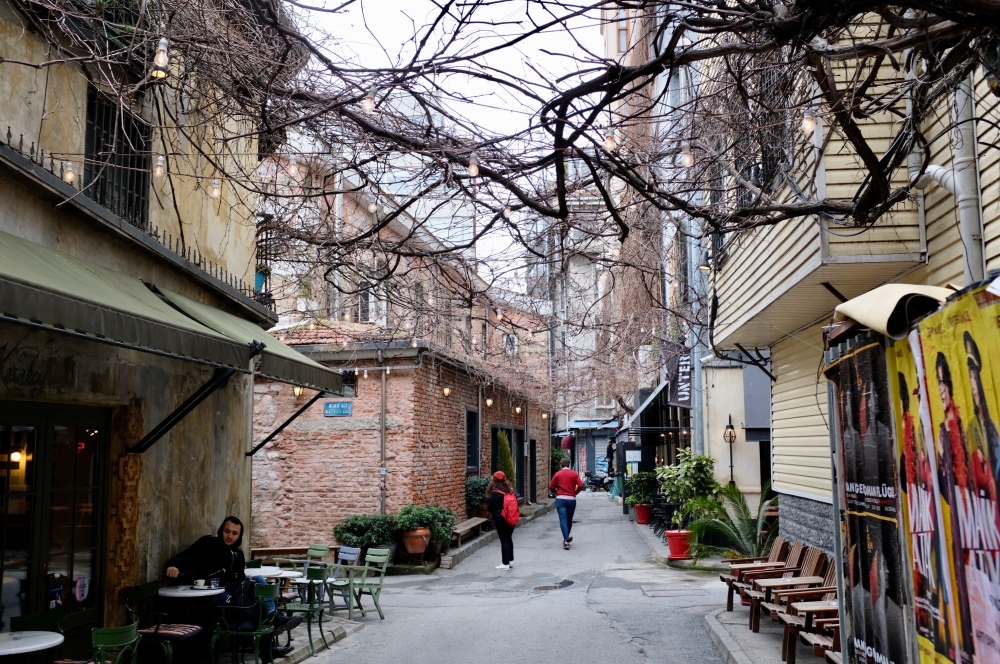 Instead we return to the neighborhood of Karakoy, lying low along the waters edge where we spend the afternoon with Duygu leading us through the trendy neighborhood of small shops and restaurants. Having both had our fill of major sites, this is an ideal way to pass the time.